Brown (1997) referred to the holotype in his note (4) on an undescribed species, pointing out that it ran to couplet 139 in the key to world genera ( Disney, 1994) but its lack of notopleural glands excluded it from both leads. It is described below.

Frons broader than long, orange yellow, with brown embracing the ocelli. Antials about midway between anterolateral and supra­antennal bristles, but lower on frons than ALs. Bristles of middle row in an almost straight transverse row but pre­ocellars slightly further apart than either is from a mediolateral. Postpedicels light brown. Arista with two basal segments each just over twice as long as broad and they and the swollen base of segment three subequal in length, but latter distinctly narrower. Hairs of third segment about as long as breadth of segment 2. Palps dusky straw yellow, with up to a dozen short bristles and at least as many hairs. Thorax essentially orange. Each side of scutum with a humeral, three notopleurals, an intra­alar, a postalar and a prescutellar dorsocentral bristle. Propleuron with two small dorsal bristles, with one large and one small ventral bristle and up to a dozen hairs in between. Anterior spiracle longer than high. Mesopleuron bare. Scutellum with four bristles, but anterior (outer) pair are longer and stronger than posterior pair. Abdominal tergites extend full breadths of segments, light brown with darker hind margins and darker dorsolateral regions (due to the microsetae of these regions being larger and more scale like). Venter pale straw yellow lightly tinged grey and with small hairs below segments 3–6. Hypopygium orange brown, structure as Figs 17 and 18 View FIGURES 17–18 . Legs straw yellow apart from brown tip to hind femur. Hind tibia with three palisades, a dorsal, a wavy anterodorsal in distal half and an anterior. [Middle legs missing in holotype. As there is a sexual dimorphism in the palisades of the mid tibiae of E. fuscohalterata   (see above) it cannot be assumed the male’s mid tibia is the same as that of the female.]. All five fore­tarsal segments with a posterodorsal hair palisade; segments 1–4 with rows of modified, short and pale, hairs below; and segments 1–3 somewhat stout. Wing 2.2–2.3 mm long. Costal index 0.48. Costal ratios 3.8: 2.3: 1. Costal cilia 0.12–0.13 mm long. Fork of vein 3 large and vein 4 originates well before fork. Veins brown, the costa being palest and 4–6 darkest. Membrane brownish grey with minute microsetae. Haltere brown.

Frons similar to male, but MLs slightly higher on frons than PO bristles. Palps with fewer bristles (8–10) and hairs. Thorax similar to male. Abdominal segments 1–6 very similar to male. Furca as Fig. 13 View FIGURES 11–14 . Terminalia and straw yellow cerci densely pubescent; the latter at least 3x as long as broad and with more than a dozen hairs, of which the most basal is longest. Hind tibia with three hair palisades: one dorsal but becoming progressively anterodorsal distally, one posterodorsal, and between these two a wavy and partly interrupted palisade in distal two thirds. Mid tibia with a dorsal hair palisade with two branches onto anterior face, the first originating at a point about 0.4x length and the second about 0.7x length; and an anterior palisade that ends at about the same level. Front tarsus more slender than that of male and with only a few modified hairs below segments 1–4. Wing 2.4 mm long. Costal index 0.44–0.45. Costal ratios 3.8: 2.3: 1. Costal cilia 0.13 mm long. Three axillary bristles present. Otherwise wing and haltere as male. 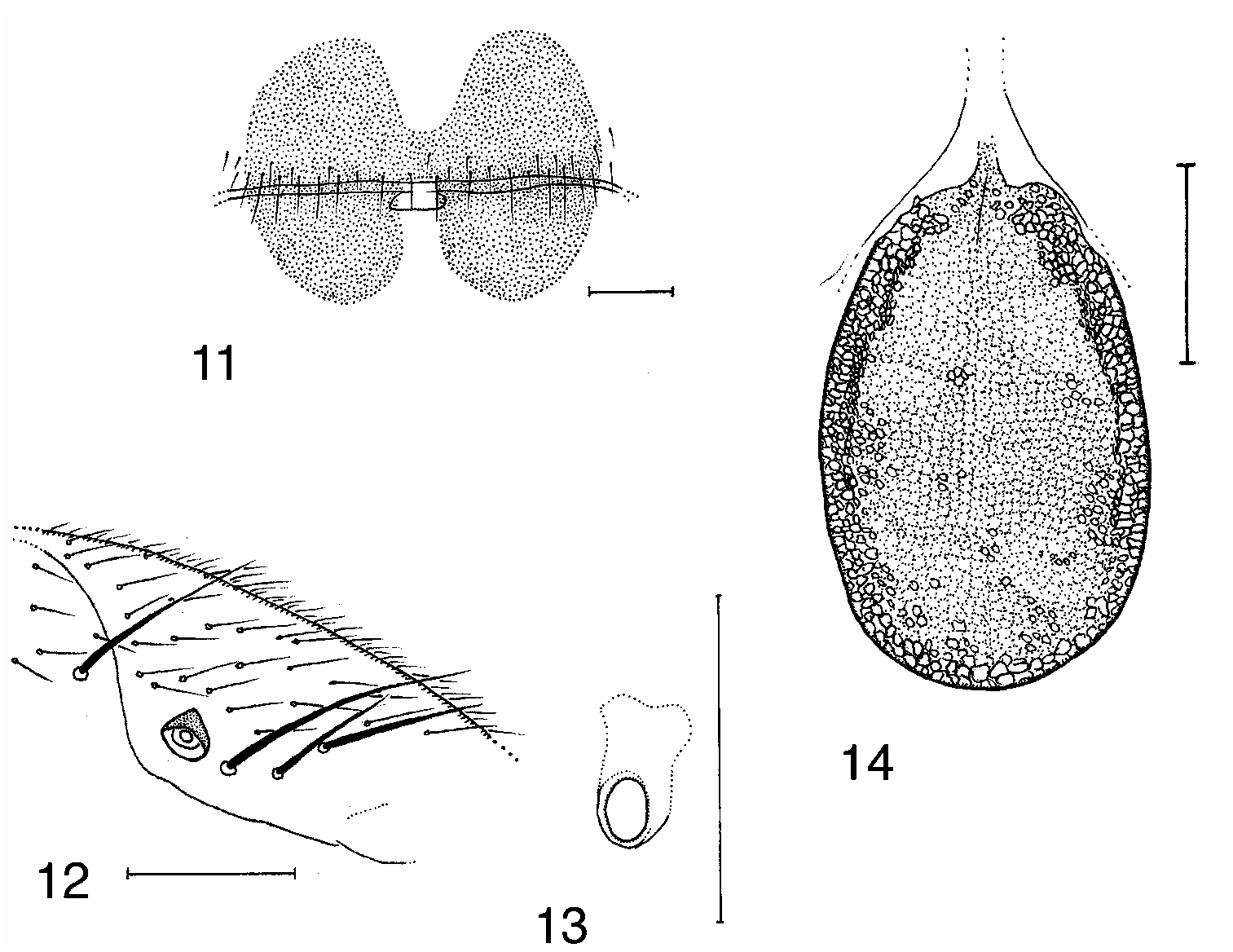 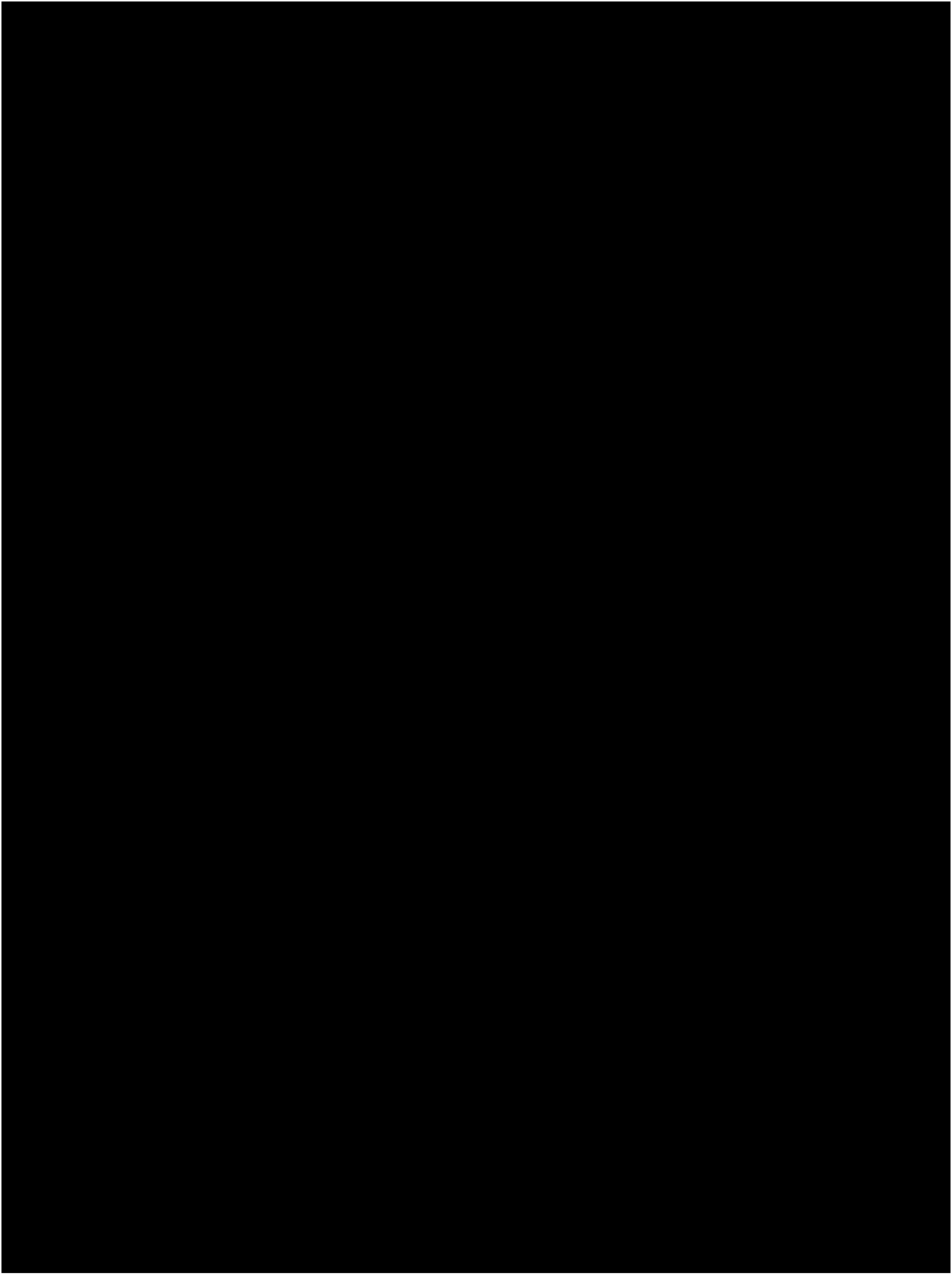