ETYMOLOGY. — This species in named as an homage to Dr Christopher J. Glasby, for his many publications on taxonomy of polychaetes, especially for his analysis on Nereidiformia and the advice and support he has provided me on the taxonomy of pilargids.

Holotype complete but several parapodia missing and body is breaking in two points: towards the middle of the body and in the posterior third of the body; about setiger 50 there is a transverse cut and another longitudinal one that does not reach the gut, but that could cause its fragmentation. The original description and later characteristics by Hartmann-Schröder (1965) and by Westheide (1974) are excellent; a few details are added here. Body pale yellow with fine transverse dark bands, especially towards the anterior end, bands coincide with the setal lobe but the preceding section is colorless. There are paired dark glands along ventral surface starting about the first third of the body. Ventral furrow shallow.

Eyes of different size, in straight transverse line, each with two eyes; external eyes larger than internal ones and left smaller one is double (each is abouth half the size of the complete one on the right side) in holotype ( Fig. 7A View FIG ). The small juvenile from Chile has lateral eyes fused into a single reniform eye, slightly behind the lateral antennae. Anterior ( Fig. 7B View FIG ), median ( Fig. 7C View FIG ), and posterior parapodia ( Fig. 7D View FIG ) with dorsal and ventral cirri very swollen, much wider than setal lobe; dorsal cirrus has its distal tip well defined and sometimes it appears jointed (even in the juvenile they are wider than the setal lobe). Most cirri have pigmented glands, appear darker than the rest of the body. Pigmented, small glandular areas behind the dorsal cirri in setigers 18-60. Interramal glands present in several anterior and posterior setigers; glands internal, can be seen above the setal lobe in lateral observation of the body.

Monro (1933) noted that the type was collected from bottoms with shell debris, coral and pebbles, at 15 fathoms; he illustrated a median parapodium and showed that dorsal cirri were almost three times wider than setal lobe ( Monro 1933: text-fig. 12b). Hartman (1947) recorded some specimens from western Mexico, identified them with A. rigida Fauvel, 1919   , and regarded A. gorgonensis   as a junior synonym. About the thickness of the dorsal cirri she stated ( Hartman 1947: 501): “It is possible that this [Monro] figure was made from a preparation depressed under the cover slip”. Western Mexico specimens belong to another species (see S. harrisae   n. sp., below), but certainly A. gorgonensis   deserves a specific status. Westheide (1974) examined two specimens and made illustrations from a living one which had longer palps and the distinction between cirrophore and cirrostyle was not clear, the eyes appear at the middle of the prostomium (not posteriorly as in the type), and the pharynx is 4-5 setigers in length. Upon fixation, palps became clearly biarticulated, eyes “moved” towards the posterior margin of the prostomium; the thickness and pigmentation of the body wall prevented observation of the pharynx length. Eyes are duplicated but the degree of fusion may vary; Westheide’s specimens had eyes completely fused while in the type they are partly fused. By comparing the drawings by Westheide (1974: 224, fig. 12C), with the figures by Monro, it could be concluded that the relative development of parapodial cirri is affected by fixation or by cover-slipe compression, as Hartman (1947) had thought, but in fact the parapodia were taken from different body regions and are not directly comparable, Monro’s are from middle and Westheide’s are from anterior regions. I conclude that they belong to the same species. 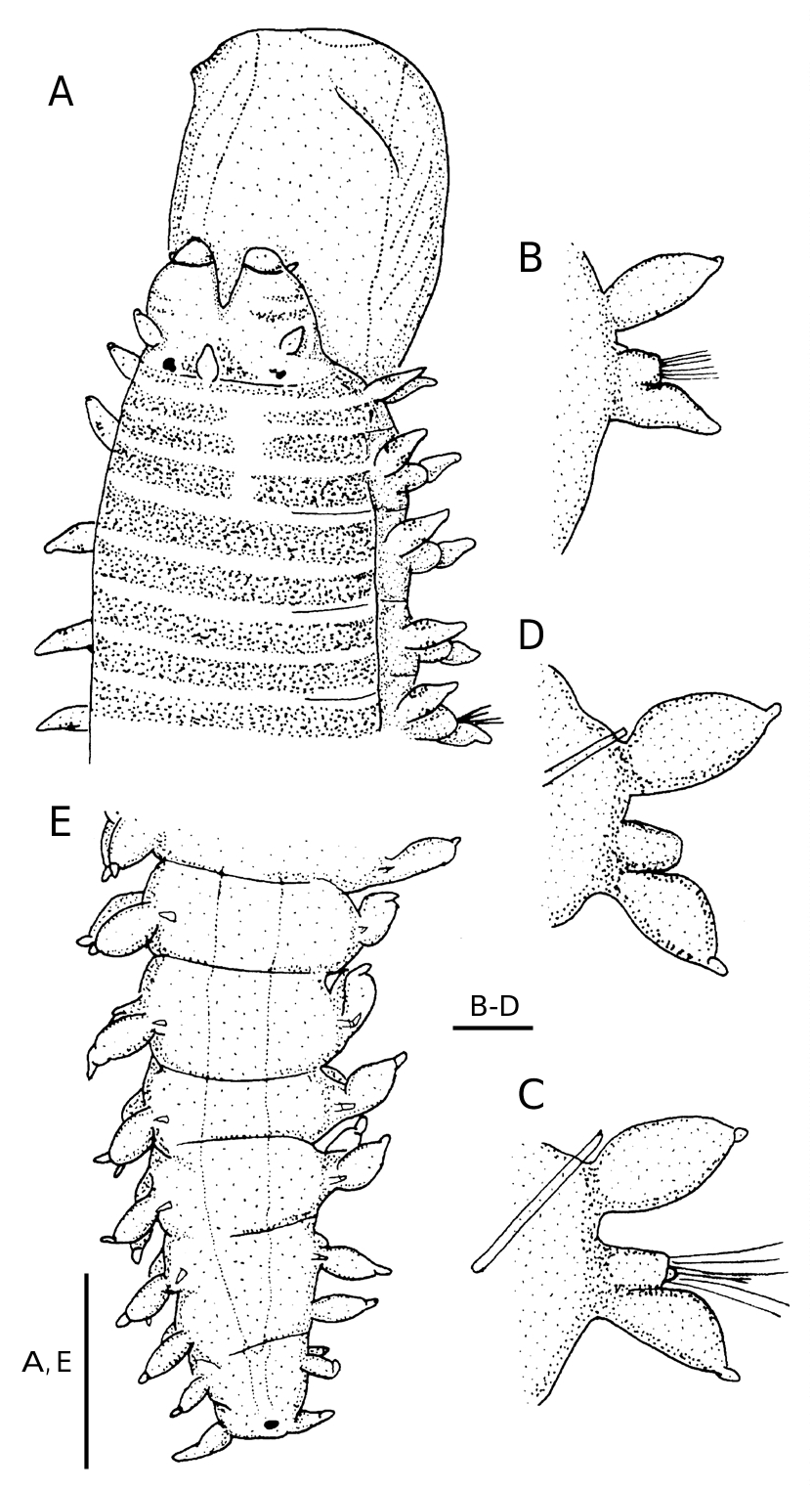