Males (n = 10): total length, 5.37–9.03; females (n = 16): total length, 7.81–11.46. Mello- Leitão’s type specimens and the male ones we examined from South America have slight differences in comparison to the specimens from the Caribbean ( Cuba and Dominican Republic), and illustrations of specimens from Central and North America (e.g. Levi 1981; Okuma 1992). The conductor of South American’s specimens have equal conformation, size and shape as specimens from Levi (1981, figs 6h, i, 19, 20, 127, 128) and Okuma (1992, fig. 11F), but have a thinner and more elongated basalward projected tail-like tip, differing from the shorter and so called ‘bird head tip’ from northern specimens. South American specimens are more similar to the type series of T. alba F. O. Pickard-Cambridge, 1903   , a junior synonym of T. laboriosa   , from Mexico (see F. O. Pickard-Cambridge 1903, fig. 15, 15a). Also, some Argentine specimens we analysed (e.g. MACN 5266) have differences in cheliceral teeth conformation. They have L2 as the longest tooth in the ventral row, while the holotype of T. bidentata   and Central and North American specimens have Gl instead. Notwithstanding those differences on palps and chelicerae, we consider that all of them represent the normal range of variation inside a species. So far, it is better to ascribe all of them to T. laboriosa   , until additional specimens are analysed and the intraspecific variation may be better assessed, especially because Levi (1981) pointed out and illustrated a range of variation common within this species in the specimens from North America.

Tetragnatha insulata Hogg, 1932   was described from the Falkland Islands, based on a female and a male syntypes. On its original description, Hogg mainly focused on the female, which was first described and has its body and appendage reasonably described and measured, with the male being poorly described. The first author of this paper was able to analyse the type material of this species, observing the teeth conformation of the chelicerae of both sexes and male genitalia, acknowledging Hogg’s description. Males bear the long-tailed embolus tip and the small basalward projected ‘sl’ before the elongated ‘T’, while the females bear small chelicerae, with laterally bulged paturon without AXu or AXl and Gu–U2 and Gl–L2 as the largest teeth. Therefore, after comparing the syntypes of T. insulata   , with excellent illustrations of the neotype by Levi (1981) and a fair number of specimens for South America, we can confirm T. insulata   = T. laboriosa   syn. nov.

Additionally, Mello-Leitão (1943) described T. bidens   based on a male from Maullin, Chilean Patagonia. The holotype of this species is deposited at Museu Nacional/ Universidade Federal do Rio de Janeiro (MNRJ 2309) and was saved from the tragic 2018 fire. Even though Mello-Leitão only mentions the more elongated ‘T’ on the description of this species, a curved and basalward projected ‘sl’ on the upper row of the chelicera is visible on his drawings (see Mello-Leitão 1943, p. 138, fig. 1). About the genitalia, he limited his description to a ‘complex bulb’, but his drawings also confirm the typical elongated tail of the conductor and embolus tips.

According to information provided in many papers (e.g. Kaston 1948; Levi 1981; Dondale et al. 2003), this species is not associated to water bodies and build horizontal orb webs near the ground in open areas, above dry grass or crop fields. However, no specimens of this species were collected by the authors of the present study. 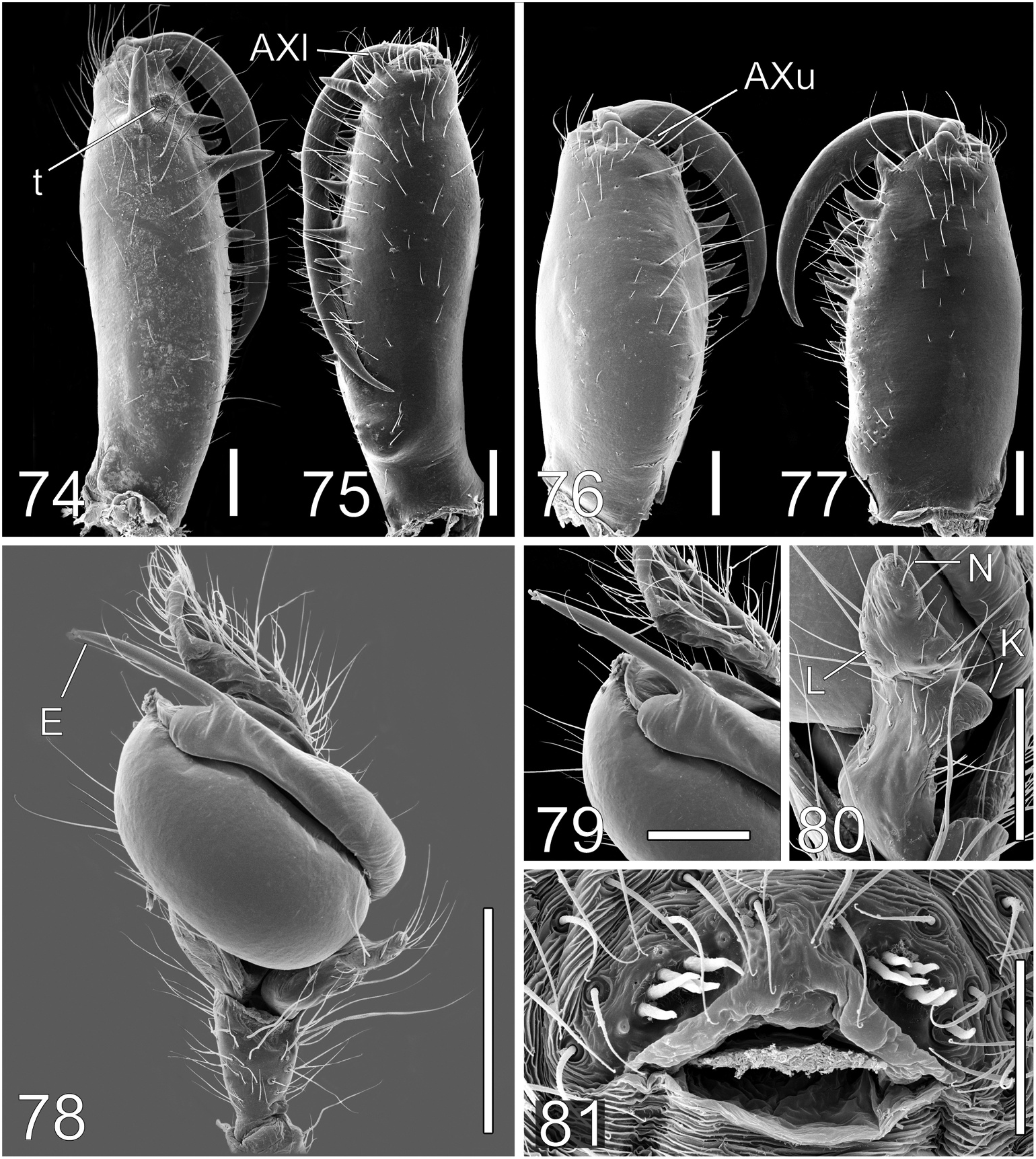