A shrubby species of berry-fruited Melastomataceae  characterized by elliptic-lanceolate leaves with the only pair of secondary veins running close to the margin, and with abundant simple, red trichomes. It differs from morphologically similar species of Clidemia   by the inflorescences that are terminal, and of Leandra   Raddi by the flowers with rounded petals. It differs from morphologically similar species of Tococa   by the lack of ant domatia and the seeds with the testa cells puzzle or S-shaped. It differs from all other Amazonian Miconia   by the seeds with a papillose testa.

Shrubs 0.4-2 m. Young branches, petioles, primary, secondary and tertiary veins on abaxial leaf surface, adaxial leaf surface, hypanthium and calyx (for the latter two, see below) moderately to densely covered with red trichomes 1.5-5 mm long, filiform, unbranched, erect but sometimes with a curved apex (mostly on the leaves), sometimes gland-tipped (mostly on inflorescences and hypanthia, but sometimes on the leaves and branches too); upper portions of young branches and inflorescences, more precisely above the insertion of leaves/bracts usually with dense tufts of trichomes smaller and slenderer than the ones elsewhere on the plant, these trichomes 0.4-0.8 mm long; throughout the plant there are also sparse, short, reddish glandular projections, up to 0.1 mm long, elongate. Leaves opposite, equal to subequal in each pair, lacking ant-domatia; petioles 6-15 mm long; blades 3.8-13 × 1.5-4 cm, elliptic-lanceolate to elliptic, base narrowly rounded or broadly acute, apex acute to shortly acuminate (up to 3.5 mm long), margins hyaline, denticulate to crenulate, ciliate; nerves 3, basal, the outer pair 2.5-5 mm from the margin, (the marginal veins sometimes confluent at the base, i.e., joining the secondary veins instead of the primary), the axils of the secondary sometimes related with a deepened abaxial surface, suggesting mite domatia (but lacking membranes), the tertiaries more or less evenly spaced every 2.5-5 mm, the quaternaries very faint, nerves moderate to strongly impressed on adaxial surface, strongly prominent on abaxial surface. Inflorescences apical or seldom with an additional pair of inflorescences at the axils of the second leaf pair, 1.5-2.5 cm long (up to 3.5 cm long when fruiting), peduncled dichasia or short panicles with up to 2 (-3) pairs of paraclades, these simple or with compound dichasia. Bracts and bracteoles early caducous, 0.8-1.3 mm long, subulate, the margins with minute glands as described above, ending on a terminal trichome, usually glandular, 1.2-1.8 mm long. Pedicel 0.6-0.9 mm long. Hypanthium 3.1-4 × 3.2-3.7 mm, campanulate, terete (not costate), outside moderately (the surface of the hypanthium is visible) covered with glandular trichomes 2-3 mm long, erect or slightly curved, and also sparsely covered with the glandular projections described above, inside glabrous, torus glabrous. Calyx persistent, with the same indumentum as the hypanthium; tube 1.4 mm long; sepals 1.9-2.1 mm long, broadly triangular, apex rounded or obtuse, margins ciliolate; outer teeth 0.9-1.6 mm long, shortly subulate, slightly to clearly longer than the sepals. Petals white or pink, 6.1-7.6 × 4.3-5.5 mm, obovate, apex rounded to emarginate, margins dentate, and glabrous, except for one or two trichomes 0.5-0.9 mm long, glandular, erect, near the apex. Stamens 10, isomorphic, white; filaments 4.8-5.1 mm long, glabrous; connective not prolonged below the thecae, dorsally arcuate, with a minute dorsal tooth 0.1-0.2 mm long, acute; thecae slightly (0.1-0.2 mm) projected below the filament insertion, 3.9-4.5 mm long, slightly ventrally curved at the apex, this emarginate, pore apical. Ovary 2-3-locular, 2.7-3 mm long, ca. 1/3 inferior, conical, smooth (not costate), glabrous but with a crown of trichomes 1.2-1.6 mm long, erect, glandular; style 5.9-6.5 mm long, curved at the apex, glabrous, stigma 0.5-0.6 mm diam., truncate. Fruits 8-9.3 × 6-7 mm, vinose, urceolate. Seeds 1.3-1.4 × 0.9-1 × 0.7-0.8 mm, raphe ellipsoid, convex, hemi-ovoid in lateral view; testa papillose, the anticlinal walls puzzle or S-shaped.

All specimens were collected along a 25 km stretch along the road between Manaus and Caracaraí (BR-174, from km 115 to km 140, north of Manaus), or in the vicinity of the city of Presidente Figueiredo, just outside the "Reserva Biológica do Uatumã”, about 75 km E (by air) of BR-174 . The plants grew on white-sand soil, associated to open vegetation locally recognized as “campina” (Fig. 3 View Figure 3 ).

Collected with flowers and fruits from March to October.

The name reflects the unusual character of this species of having seeds with a papillose testa.

The extent of occurrence (EOO) that includes both sets of localities is 768 km2 (Fig. 3 View Figure 3 ). Even though some of the collections come from areas near the "Reserva Biológica do Uatumã” (a conservation unit kept by the Brazilian government), none have been made inside it. These are all areas near roads and with active low scale farming and logging. Following IUCN guidelines ( IUCN 2012; IUCN Standards and Petitions Subcommittee 2014), we recommend that this species is categorized as endangered.

In the last five years at least six other Melastomataceae  have been described from Amazonia ( Goldenberg et al. 2011; Goldenberg and Meirelles 2011; Meirelles et al. 2015; Meirelles and Goldenberg 2014; Michelangeli 2014; Michelangeli and Goldenberg 2014). All but one of these species have very restricted distributions, underscoring that because our knowledge of plant diversity in Amazonia is still based mostly on a few well sampled localities, we still have a long way to go before we have a complete knowledge of the biodiversity of this region.

Miconia papillosperma   is a very distinctive species that really does not closely resemble any other species of Miconieae  known to us. Most of the specimens are in fruit and this is presumably why it remained undescribed until now. The elliptic-lanceolate to elliptic leaves with the only pair of secondaries very close to the margin resembles some species of Macairea   DC., an unrelated group with capsular fruits in the Marcetia clade (see Michelangeli 2013), but the leaf surface and indument are different. The shrubby habit and abundant red trichomes on the leaves and young stems resemble some species of Clidemia   , Leandra   , and Miconia   , but no other species in these genera has the leaves of Miconia papillosperma   . Tococa rotundifolia   (Triana) Wurdack and Tococa hirta   O’Berg ex Triana also have similar reddish trichomes, but in both species at least one of the leaves of each pair has ant domatia and the venation pattern is quite different, with the secondaries running near halfway between the primary vein and the margin and not towards the margins of the lamina ( Michelangeli 2005). The flowers of Tococa rotundifolia   , with a winged hypanthium, can’t be confused with those of Miconia papillosperma   . However, the broad conical hypanthium with a calyx with subulate outer teeth, the anthers with a dorsal connective blunt tooth, and the ovary with a corona of glandular trichomes at the apex, does resemble other species of Tococa   , most notably Tococa ciliata   Triana and Tococa hirta   ( Michelangeli 2005). However, the seeds of all species of Tococa   sensu stricto have the testa cells with straight walls ( Michelangeli 2000; 2005), while the testa cells in Miconia papillosperma   have clearly puzzle or S-shaped walls. In summary, we think that the best placement for this new species is within Miconia   given its terminal inflorescence with flowers with rounded petals.

It should be noted that the seeds of Miconia papillosperma   are unique within the tribe. To date the seeds of more than 500 species of the close to 2000 Miconieae  have been imaged and studied and none of them have papillose testa ( Groenendijk et al. 1996; Michelangeli 2000; Martin and Michelangeli 2008; Ocampo and Almeda 2013; Ocampo et al. 2014). Many species in different genera do have testas with convex or tuberculate cells, but these are not extended to form papillae. There is a clade within Tococa   that has trichomes on the seeds, but these are morphologically different from the papillae of Miconia papillosperma   , and they are on the raphe and not on the testa. The ecological and taxonomic significance of these papillae should be investigated further. 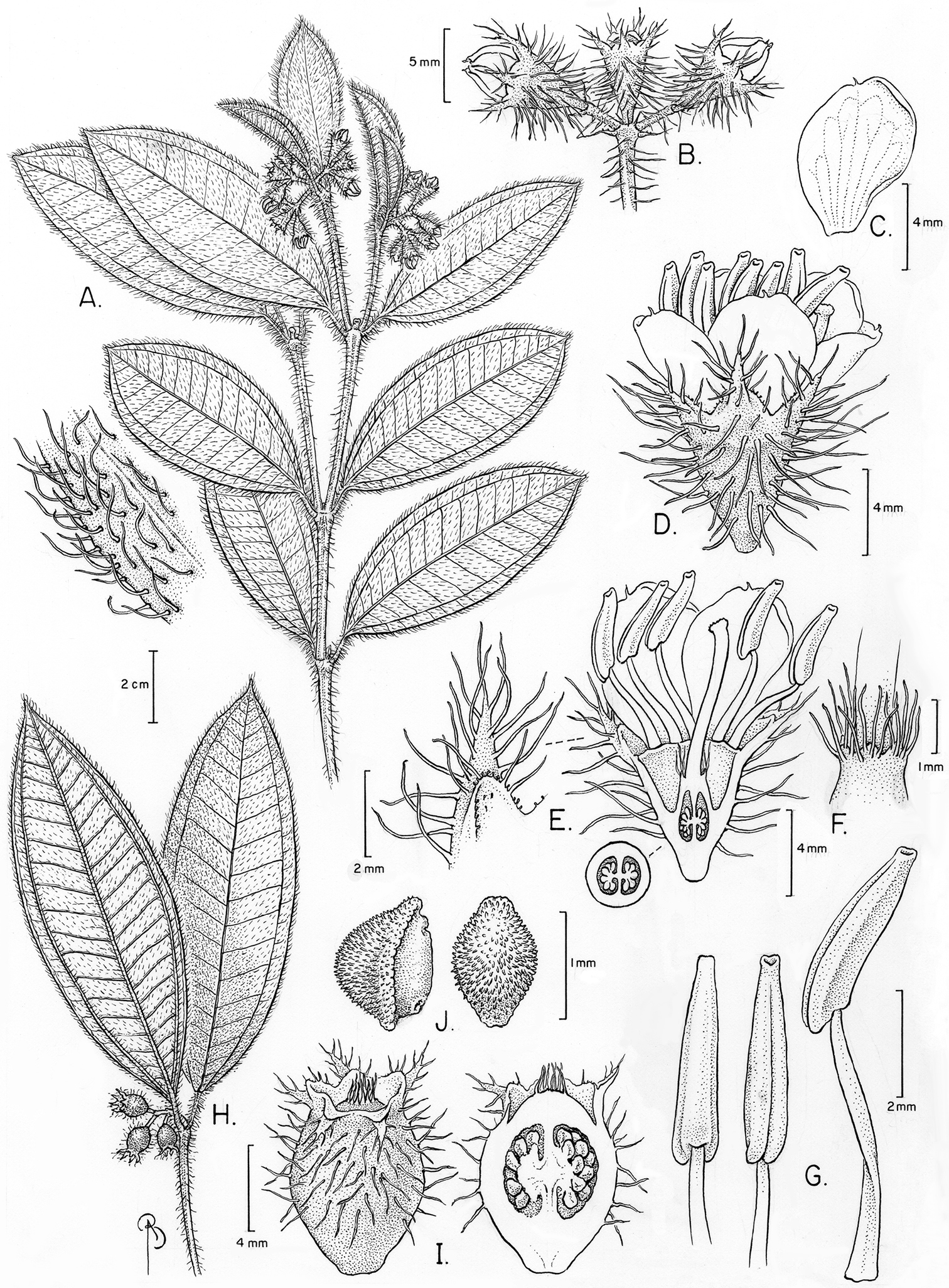 Figure 1. Miconia papillosperma. A Flowering branch B Detail of inflorescence C Petal, ventral view D Flower at anthesis E Longitudinal section of the flower showing hypanthia and ovary with details of an exterior calyx tooth and cross section of the ovary F Detail of the apex of the ovary G Stamens in dorsal, ventral and lateral view H Fruiting branch I Mature fruit in whole view and longitudinal section J Seeds in lateral and testa view. (A-G drawn from the NY isotype H-J from Zaruchi 2564, NY).

Figure 2. Scanning electron microphotograph of the seeds of Miconia papillosperma. A Whole seed B Detail of the papillose surface of the testa (from Rocha 799, NY). 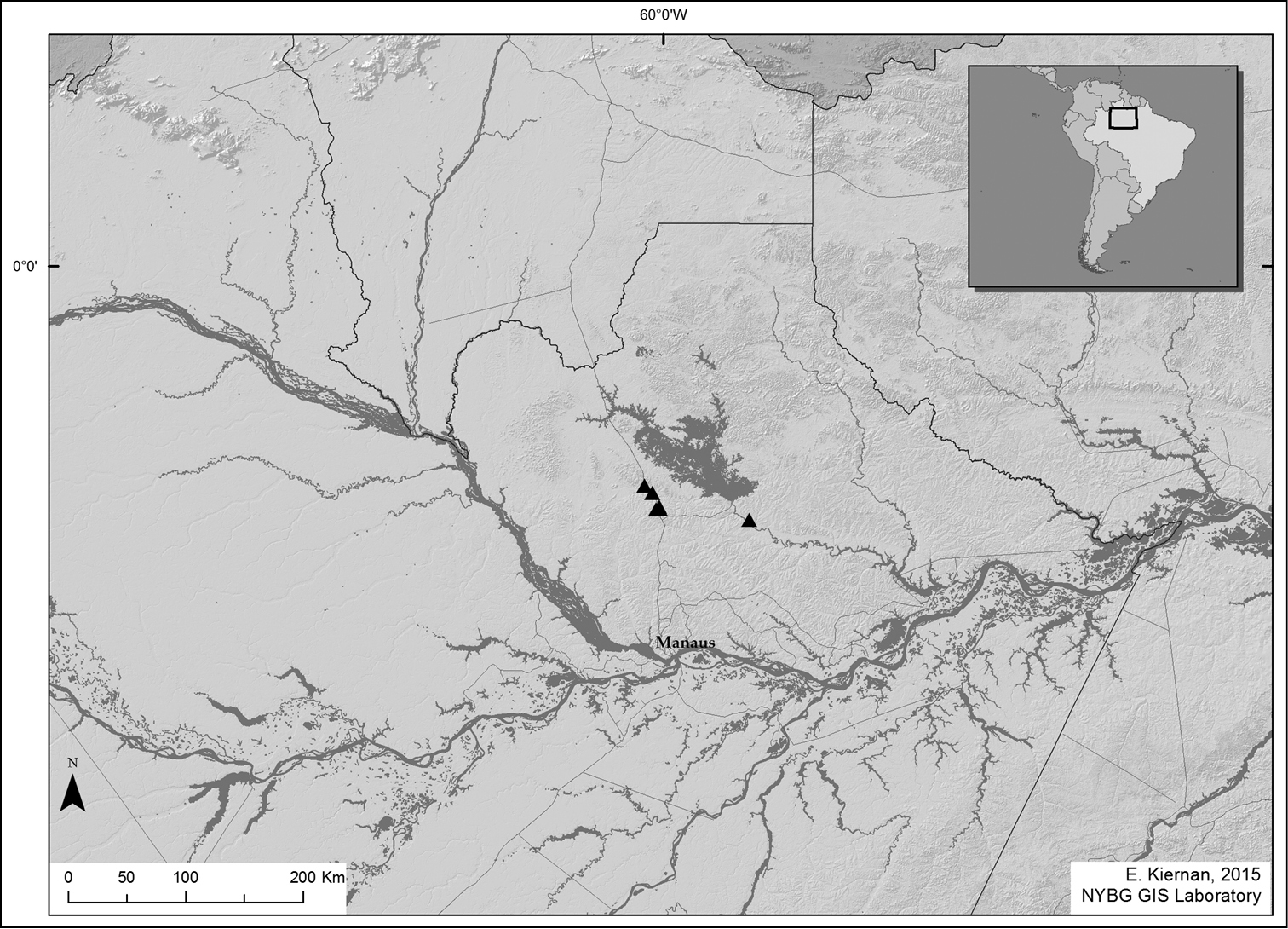