There were some very rare plakinid spicules found among the studied material that belong to the genus Placinolopha Topsent, 1897  ( Figs. 27View FIGURE 27 A –H). One can distinguish several distinct types among these spicules: the amphiclads/anadiaenes with two opposed cladomes (made of two clads) curved backward in the same plane ( Figs. 27View FIGURE 27 A, B), the amphiclads (anadiaenes) with two opposed cladomes curved backward but the cladomes twisted in relation to one another at about 90 ° ( Figs. 27View FIGURE 27 C, D). Sometimes the clad ends are divided dichotomously ( Fig. 27View FIGURE 27 D), sometimes the amphiclads have long shaft endings with cladomes divided into 4 on their both ends ( Figs. 27View FIGURE 27 F, G), and finally there is also a mix of both of these morphotypes ( Fig. 27View FIGURE 27 E). All of these anchorate spicules are similar, both in morphology and size, to those occurring in the Recent species Placinolopha sarai Lévi & Lévi, 1989  ( Fig. 28View FIGURE 28 A) and Placinolopha moncharmonti ( Sarà, 1960)  (compare also with Sarà, 1960, fig. 1 A). The spicules described here are big and exceed 500–600 µm of length which makes them almost as big as the Recent P. sarai  spicules that are of size 770–880 µm in length ( Lévi & Lévi 1989). The spicules of P. moncharmonti  described by Sarà (1960) are smaller, exceeding about 400 µm of length. P. s ar a i is known from Eastern Philippines and P. moncharmonti  from the Mediterranean (van Soest et al. 2013). Considering their distribution and their size, it is most probable that the studied Late Eocene spicules belong to Placinolopha cf. sarai  or to another closely related fossil species.

It is also worth mentioning that spicules resembling amphiclads with cladomes divided in 4 occur in the tetillid Paratetilla aruensis Hentschel, 1912  known today from Indonesia (van Soest et al. 2013) but contrary to Placinolopha  ’s spicules, those belonging to Paratetilla  have cladomes divided trichotomously (compare Hentchel 1912, pl. 18, fig. 11) and are much larger.

Apart from amphiclads, there are also rare plakinid lophocalthrops and triods occurring in the studied samples ( Figs. 27View FIGURE 27 I –L). These distally lophate spicules of about 500–1000 µm in size resemble acanthocalthrops of Recent Placinolopha  , especially those described by Muricy & Díaz (2002, fig. 2 I). They mostly resemble the spicules of Placinolopha bedoti Topsent, 1897  from the Banda Sea and the Indonesian Exclusive Economic Zone ( Fig. 28View FIGURE 28 C). Admittedly, there is another species of Placinolopha  recorded from around Australia (see Atlas of Living Australia)— P. sp i no s a [( Kirkpatrick, 1900), now Plakina australis  ( Gray, 1867 a)] but nevertheless, the spicules resemble more closely those of P. bedoti  .

In both cases, however, the size of described spicules (even the biggest category) is smaller than the size of fossil spicules that are about 275–300 µm large. However, despite the differences in size of the spicules, the close resemblance of these morphotypes supports attribution of the Eocene spicules to Placinolopha cf. bedoti  .

Plakinid calthrops were rarely recognized in the Jurassic, Cretaceous, or the Miocene of the Bahamas (Burky 1978). Similar triods were described from the Miocene of Portugal but assigned, with some doubts, to Pachastrellidae  or Calthropellidae  (compare with Pisera et al. 2006, fig. 10 A). On the other hand, Reid (1970) suggests that plakinid-related sponges were already noted in the Cambrian, but it is an open question. The spicules of Placinolopha  bedoti- type were, for example, described from the Early Pliocene deposits of the New Caledonia Basin ( Locker & Martini 1986), but the amphiclads of Placinolopha cf. sarai  have not been reported so far in the fossil record. 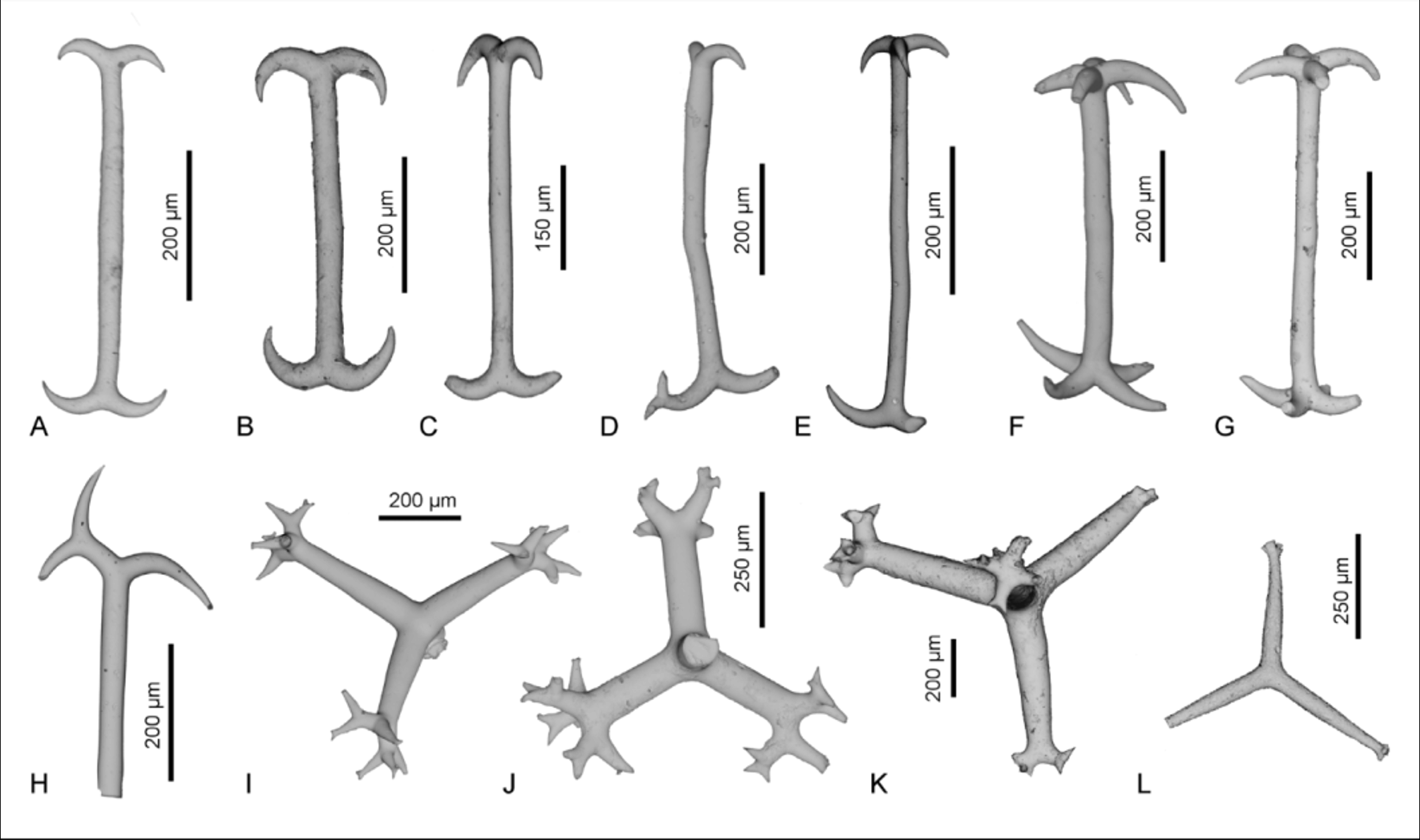 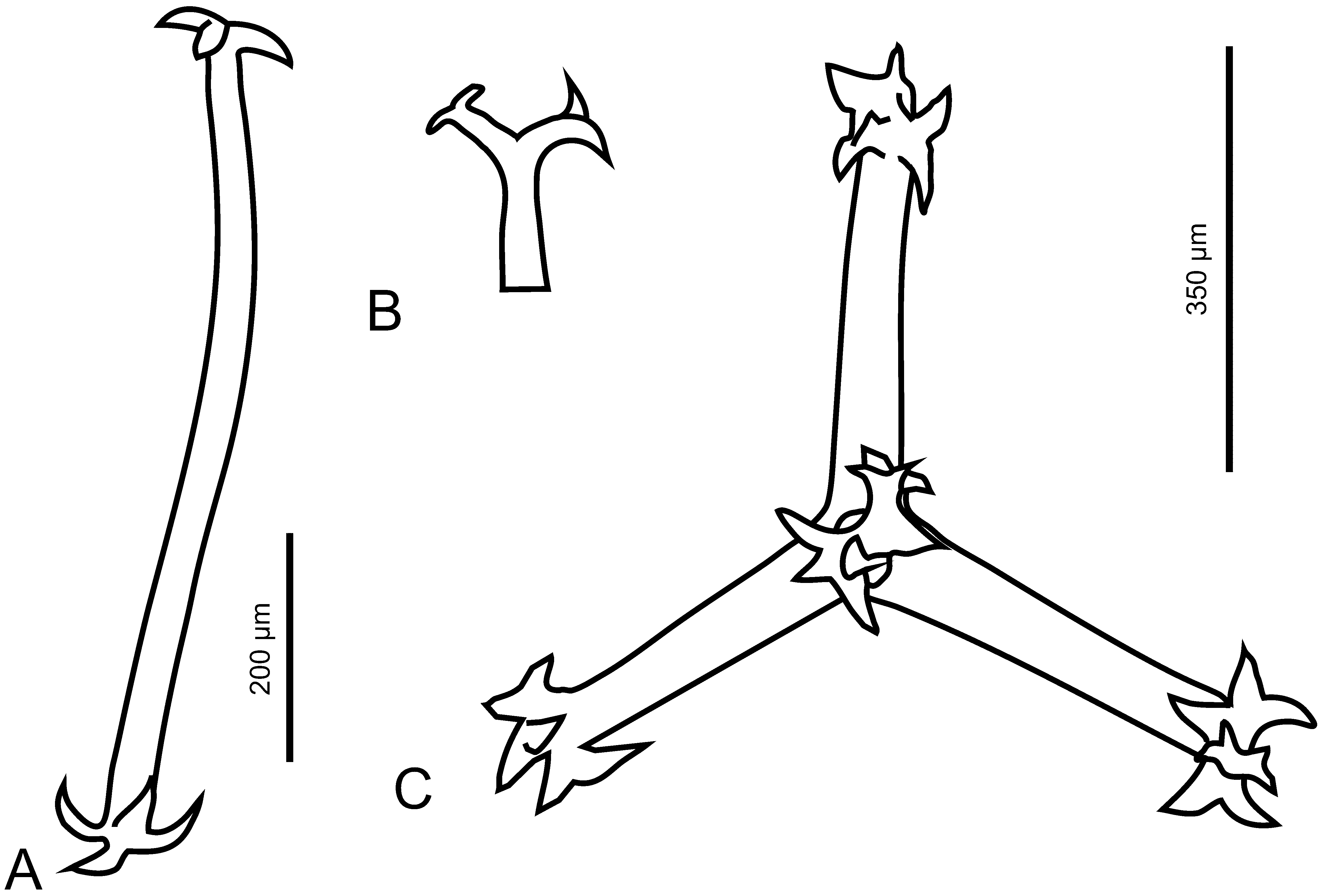