Color. The highly variable color patterns, where known for fresh specimens, overall range from densely mottled reddish brown overlying off white to large unbroken areas of orange on the carapace ( Fig. 4A, B View FIGURE 4 ). Upper surfaces of the cheliped palms vary from mostly off white to broken reddish brown above, the latter sometimes with a pair of large, solid, darker spots on the supero-internal surface of the palm. Fingers of the chelae vary from pale horn to brown. The merus of the ambulatory legs may have a near solid or broken band of white marking the distal quarter, while the distal half of propodus and dactylus are typically of lighter coloration that more proximal articles.

Etymology. The species name is assigned in recognition of Frank M. Truesdale for his many contributions to crustacean biology through his personal research and training of students, but also in gratitude for many years of supportive assistance and collaborations with DLF and his students. In addition to his renowned compilations on the history of carcinological research, his special expertise in the rearing of decapod larvae has contributed substantially to understanding of decapod crustacean life histories, including those of panopeid crabs.

Size. Carapace widths ranged from 4.4 mm in the smallest male paratype to 9.6 mm in the male holotype. The largest female was one of two ovigerous specimens, 9.3 mm in carapace width. Embryonated eggs (most showing eyespots) in sampled clutches of alcohol-preserved ovigerous females ranged from 0.33 to 0.39 mm in greatest dimension.

Habitat. Thus far known only from intertidal to shallow subtidal wave-washed rocky substrates (0–1 m depth), including man-made jetties, especially from porous rocks eroded by sipunculans, burrowing bivalves, or boring sponges, there among (or in cavities beneath) epibiota dominated by calcareous and fleshy macroalgae, barnacles, or encrusting sponges.

Morphologically, all members of Panopeus   s.s. have a similar male first gonopod tip of a familiar trifid panopeid form with three divergent, clearly separated terminal processes, this feature also being shared with Eucratopsis   as well as some other panopeid genera (see Martin & Abele 1986). In contrast, the three members of Eurypanopeus   that were grouped into an adjacent subclade ( E. planissimus   , E. abbreviatus   , and E. ater   ) share a male first gonopod tip of modified panopeid form with less pronounced separation of three terminal processes, perhaps expected given shallow lobiform to subquadrate anterolateral teeth that differ strikingly from those in both Panopeus   s.s, and members of Eurypanopeus   , as well as Lithopanopeus   n. gen. The terminal configuration of the male first gonopod in Lithopanopeus   n. gen. is of yet another highly modified panopeid form, but the gonopod trunk is also armed by a unique row of strikingly large teeth along much of its sternomesial margin, a feature found in no other known panopeid genus. While the general habitus of Lithopanopeus   n. gen. resembles that in some species of Glyptoplax   , Hexapanopeus   , and Acantholobulus   , this character of the first gonopod trunk, along with striking differences in its terminal configuration, readily distinguishes it from all known members of these genera (see Martin & Abele 1986; Felder & Martin 2003).

So far as known, the habitat of Lithopanopeus truesdalei   n. gen., n. sp., is restricted to eroded rocky or other hard substrates of intertidal and shallow subtidal warm-temperate to tropical waters of the western Gulf of Mexico, particularly where date mussels identified as Leiosolenus bisulcatus (d’Orbigny, 1853)   ( Mytilidae   ), sipunculans assignable to Antillesoma antillarum (Grube & Oersted, 1858)   ( Phascolosomatidae   ) and unidentified boring sponges have heavily eroded limestone or other penetrable substrates. While it is unknown whether the association of L. truesdalei   n. gen, n. sp. with these burrowers is to any degree obligate, most specimens of this new species were taken from cavities abandoned or occupied by these burrowers beneath epibiota covering rock surfaces. Other small panopeid crab species broken from such porous jetty rocks at Brazos Santiago, Texas, where the sampled substrates were limestone rocks serving as fill between large granite boulders, included Acantholobulus bermudensis   and Hexapanopeus paulensis Rathbun, 1930   , along with occasional juvenile specimens of Eurypanopeus ater Rathbun, 1930   (though the latter were more commonly found as adults burrowed beneath shoreward intertidal stones on sand). Small non-panopeid brachyurans also broken from these cavities or found to occupy lower strata of overlying epibiota included Pseudomedaeus agassizii (A. Milne-Edwards, 1880)   ( Xanthidae   ), Pilumnus dasypodus Kingsley, 1879   , Pilumnus pannosus Rathbun, 1896   ( Pilumnidae   ), and juveniles of Menippe adina Williams & Felder, 1986   ( Menippidae   ). Other small brachyurans that were usually more broadly distributed and less commonly found in this microhabitat were the majoid Acanthonyx petiverii H. Milne Edwards, 1834   ( Epialtidae   ) along with the grapsoids Pachygrapsus gracilis (de Saussure, 1858)   and Pachygrapsus transversus (Gibbes, 1850)   ( Grapsidae   ).

Given that Lithopanopeus truesdalei   n. gen., n. sp. occurs in shoreline habitats that have been the subject of varied regional surveys since the 1930s (for example, Whitten et al. 1950) it may seem remarkable that this species has gone unreported to date, which thus suggests it could possibly represent a recent introduction. While we cannot exclude this possibility, the species has clearly been established in south Texas for over four decades, and has over that time period remained a minor but persistent component of the assemblage of small brachyurans that populates fouled shoreline hard substrates of anthropogenic origin. More probable than an introduction, we suspect the species colonized south Texas rock jetties that were maintained over the last century to buttress margins of inlets along what are otherwise uninterrupted sandy beaches that line almost all of the Texas shoreline.As the species also occurs further to the south on natural rocky ledges at Playa de la Mancha, Veracruz, Mexico, northbound longshore currents could easily have provided larval recruits to the more northerly jetties. As to why this xanthoid was not previously recognized at either extreme of the range, specimens from western Gulf of Mexico shoreline waters of south Texas and northeastern Mexico were not well represented in Rathbun (1930), and little other contemporary taxonomic expertise was focused on small xanthoid crabs of hard substrates. For example, the sympatric and now regionally familiar Acantholobulus bermudensis   was not reported from the northwestern Gulf of Mexico until tentative identification by Felder (1973), that report being from a commonly sampled rock jetty fronting on long-establish marine laboratory. When the identity was later confirmed by synoptic comparison to the type (DLF, 1974), a single prior collection was found to have been taken from Texas in 1966 (USNM 113636) and identified by H.B. Roberts, though never published. The species is, however, now widely documented from throughout appropriate habitats in coastal waters of the Gulf of Mexico ( Felder & Martin 2003; Felder et al. 2009). Most likely it was overlooked or unrecognized in the course of early studies, much as in the case of present newly described species.

Characters other than the distinctive male first gonopods also separate the often sympatric panopeid Hexapanopeus paulensis   from L. truesdalei   n. gen., n. sp., even though both have the sinus between the first and second anterolateral teeth well-defined, a distal furrow present on the cheliped carpus, and a lobiform basal tooth on the dactylus of the chela. In H. paulensis   , the second anterolateral tooth is typically more angular than lobiform and the carpus of the cheliped very uniquely has 8–15 tubercles on its upper surface proximal to the distal furrow ( Williams 1965, 1984). 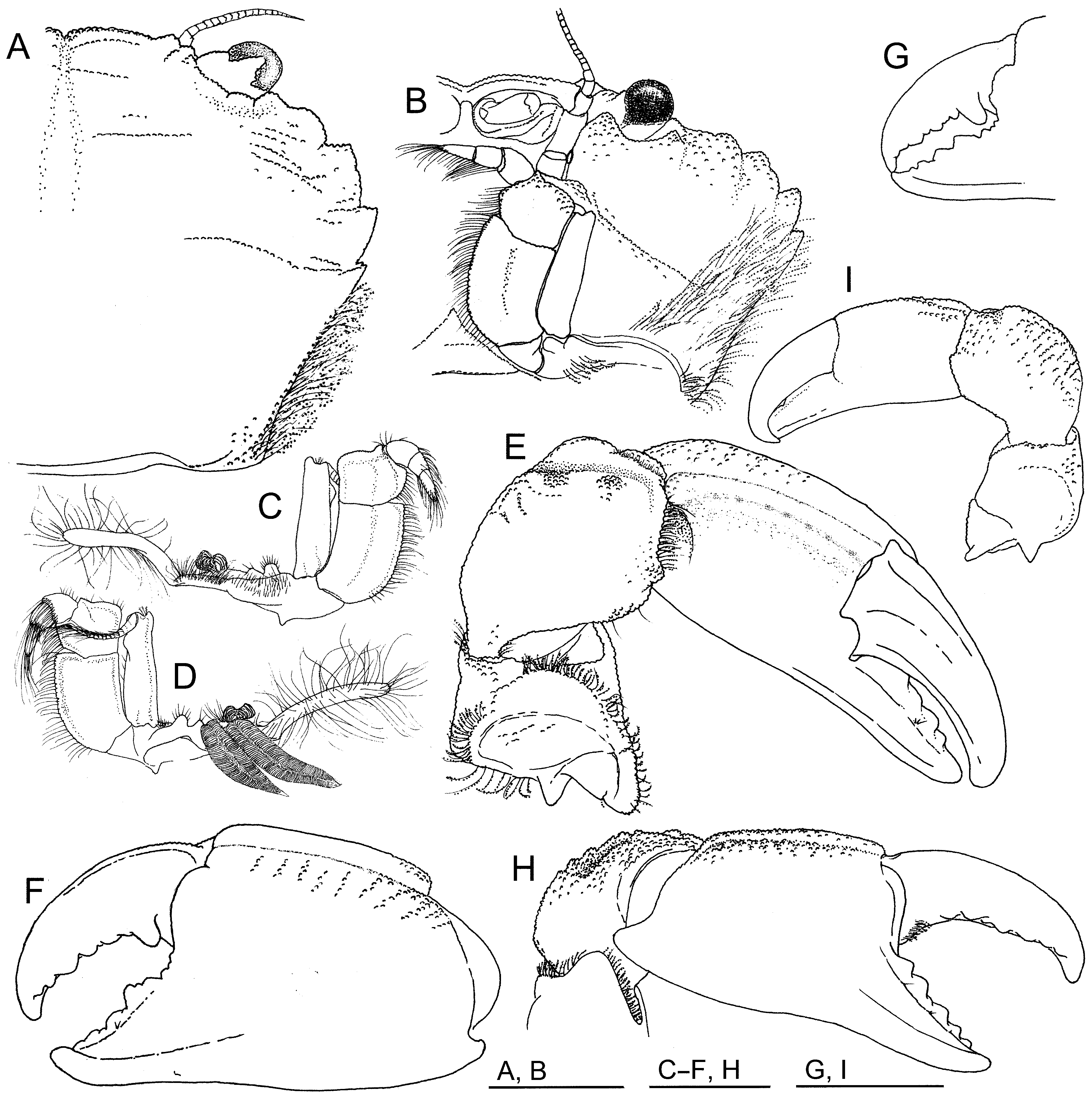 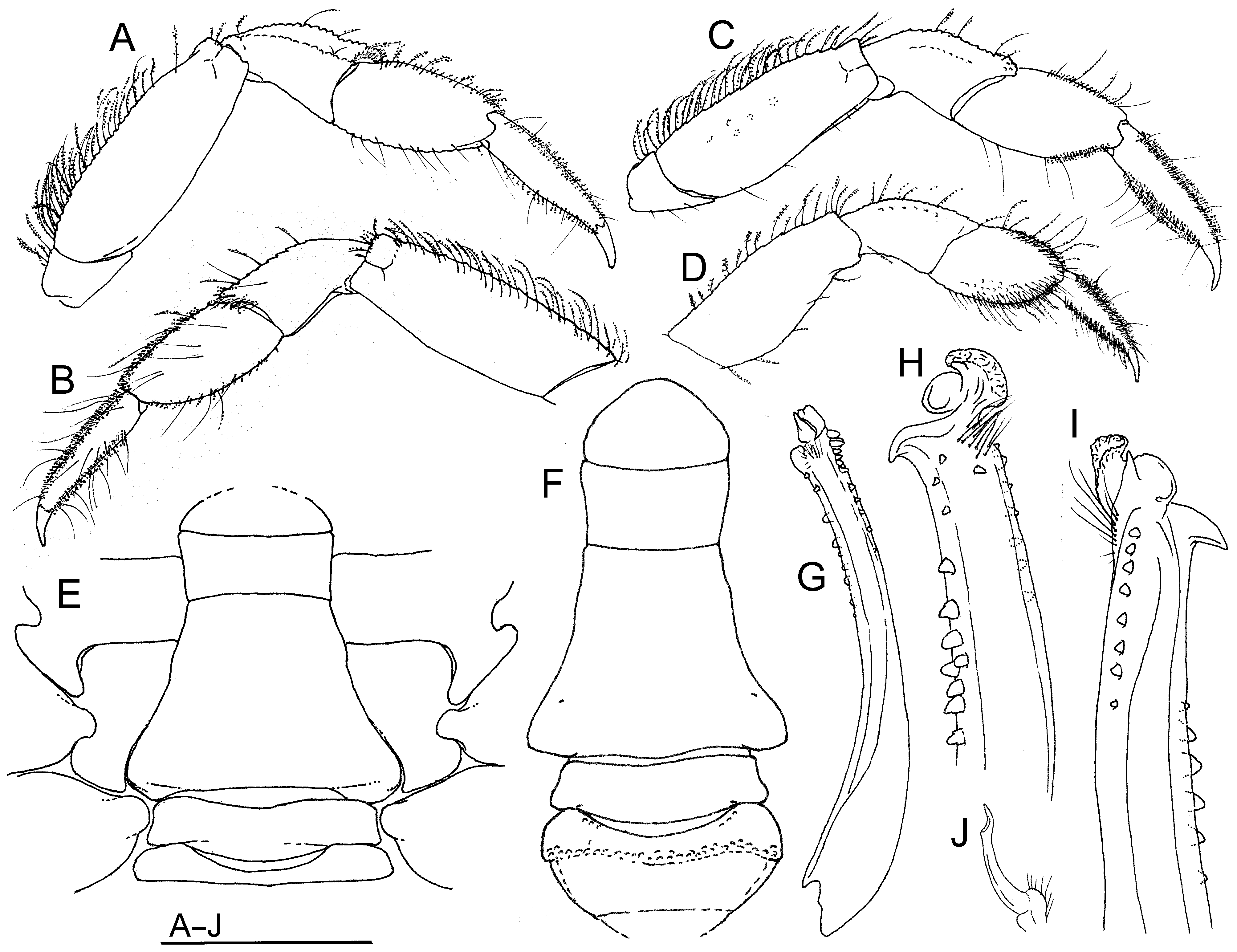 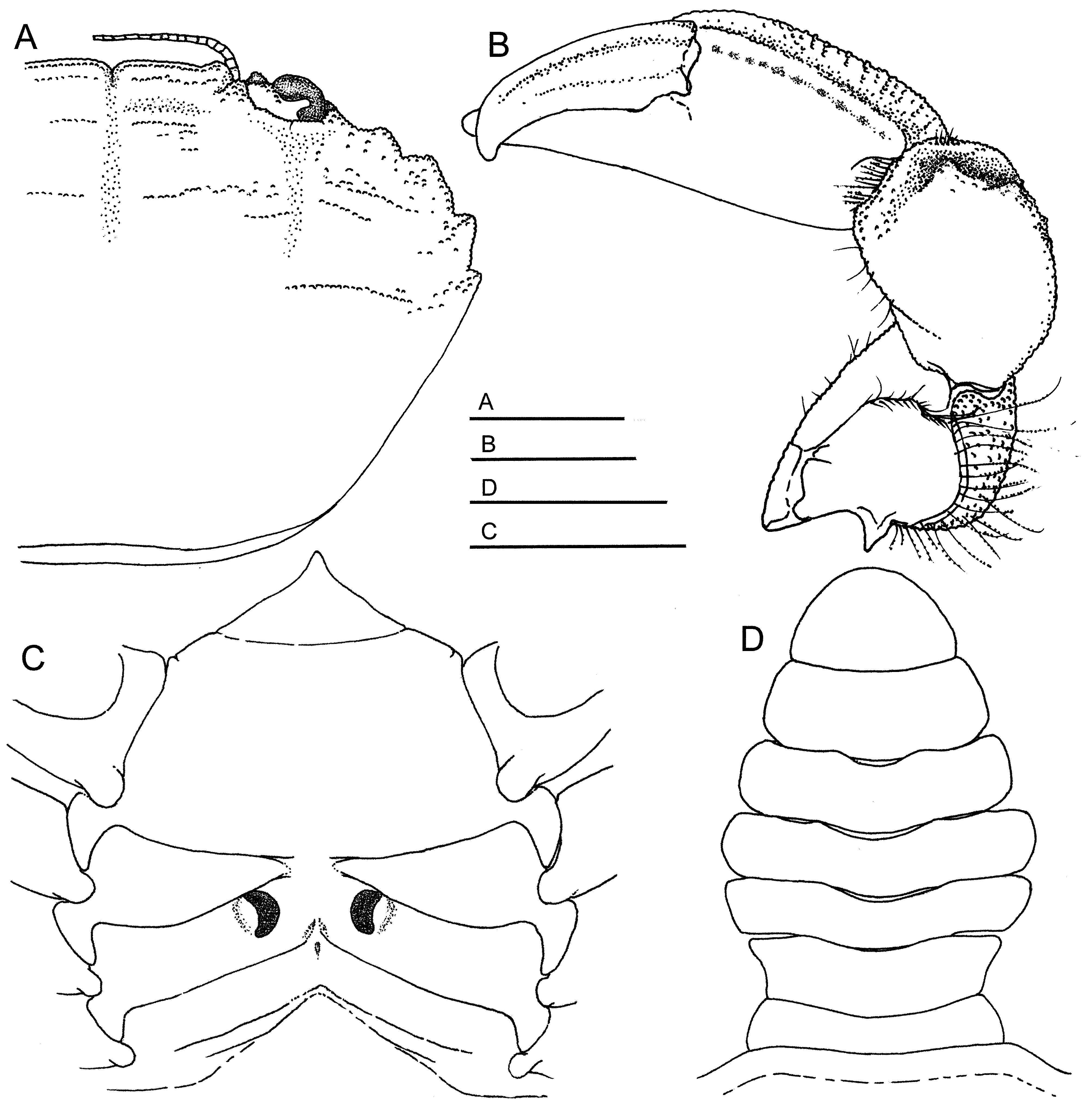