Lecocq et al. (2015) considered that B. caucasicus   is likely to be a species separate from B. lapidarius   from evidence of COI-coalescent analysis and from differences in composition of cephalic labial gland secretions (CLGS, believed to include sex pheromones). They had no samples of B. eriophorus   s. str. but considered it likely to be conspecific with B. caucasicus   .

Our PTP analysis ( Fig. 10 View Fig ) of coalescents in the COI gene supports three coalescents for candidate species within the lapidarius- group as identified in the four gene species tree ( Figs 21–22 View Fig View Fig ): a Caucasusregion candidate species, caucasicus   , supported strongly, and two more widespread candidate species within the European taxon lapidarius   s. lat., supported relatively weakly. We have been unable to secure fresh samples of the taxon eriophorus   s. str. – recent collections in the Caucasus mountains made by three different collectors of bumblebees have been unable to find this taxon.

From morphology, B. eriophorus   s. lat. has a colour pattern distinct from B. lapidarius   s. lat. for the females with a white-banded thorax. A worker from Azerbaijan in the NHMUK has the black hair of the band between the wing bases much intermixed with white hair, representing a state intermediate between that typical for the taxon eriophorus   s. str. and that for the taxon caucasicus   . This is slightly darker than the infrasubspecific taxon atava illustrated in Reinig (1935: text-fig. 4-iv). However, both the NHMUK worker and Reinig’s taxon atava with their mixtures of black and white hairs between the wing bases appear to be intermediate in colour pattern between the white unbanded taxon eriophorus   s. str. and the white-banded taxon caucasicus   , so these two taxa are interpreted provisionally as conspecific as parts of B. eriophorus   s. lat.

Queens medium-sized body length 17–21 mm, workers 11–15 mm. Can be distinguished in West Asia by their combination of the thoracic dorsum with some pure white hair and the hair of the face and T1–2 black (cf. B. lapidarius   , B. sichelii   , B. incertus   , B. alagesianus   ). Workers can be distinguished (cf. B. simillimus   ) by the combination of the pale hair of the thoracic dorsum white with T1–2 black and the wings clear.

Food-plant choice expected to be generalist but no records. The male mate-searching behaviour is expected to resemble the patrolling of B. lapidarius   . 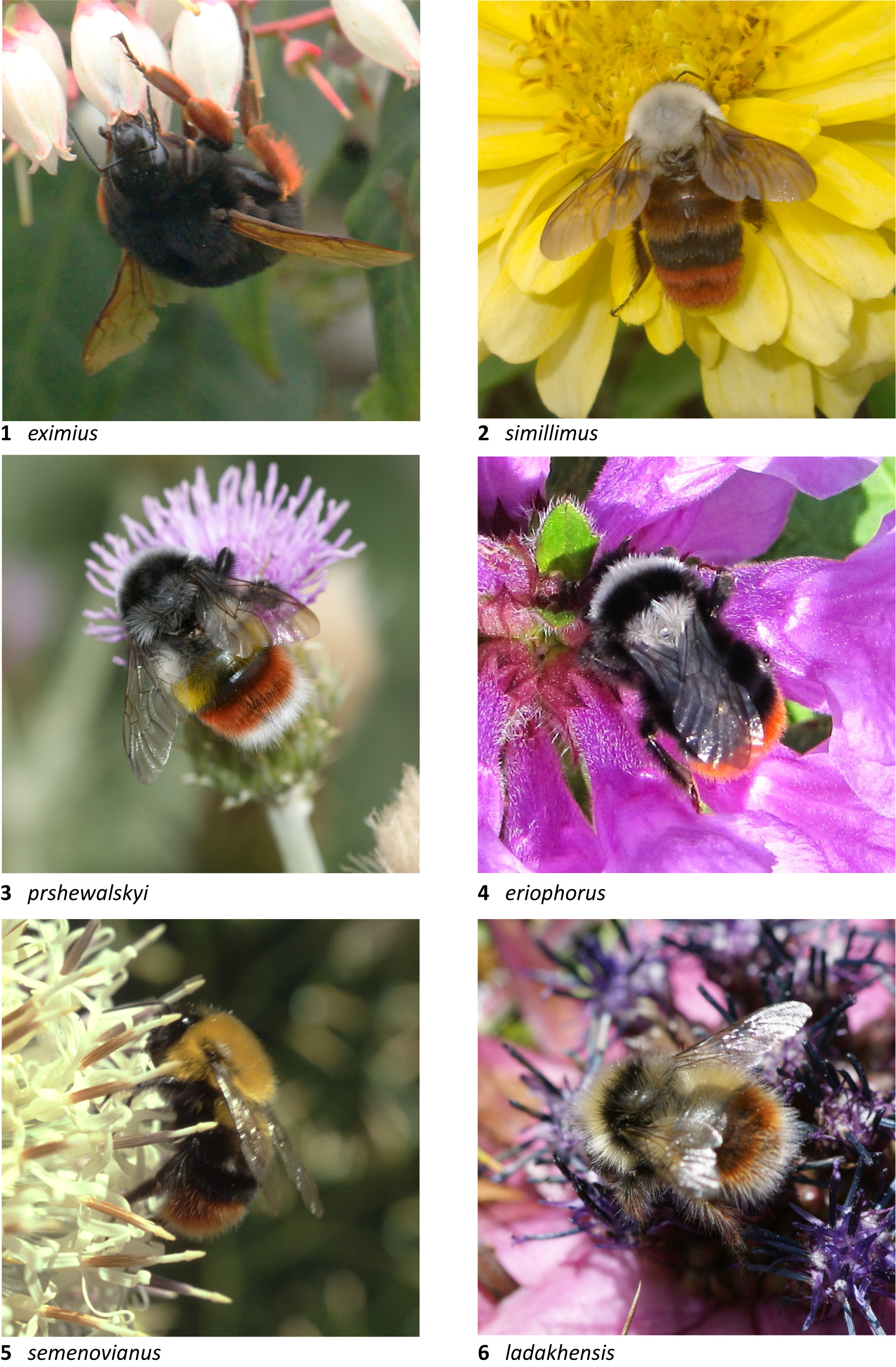 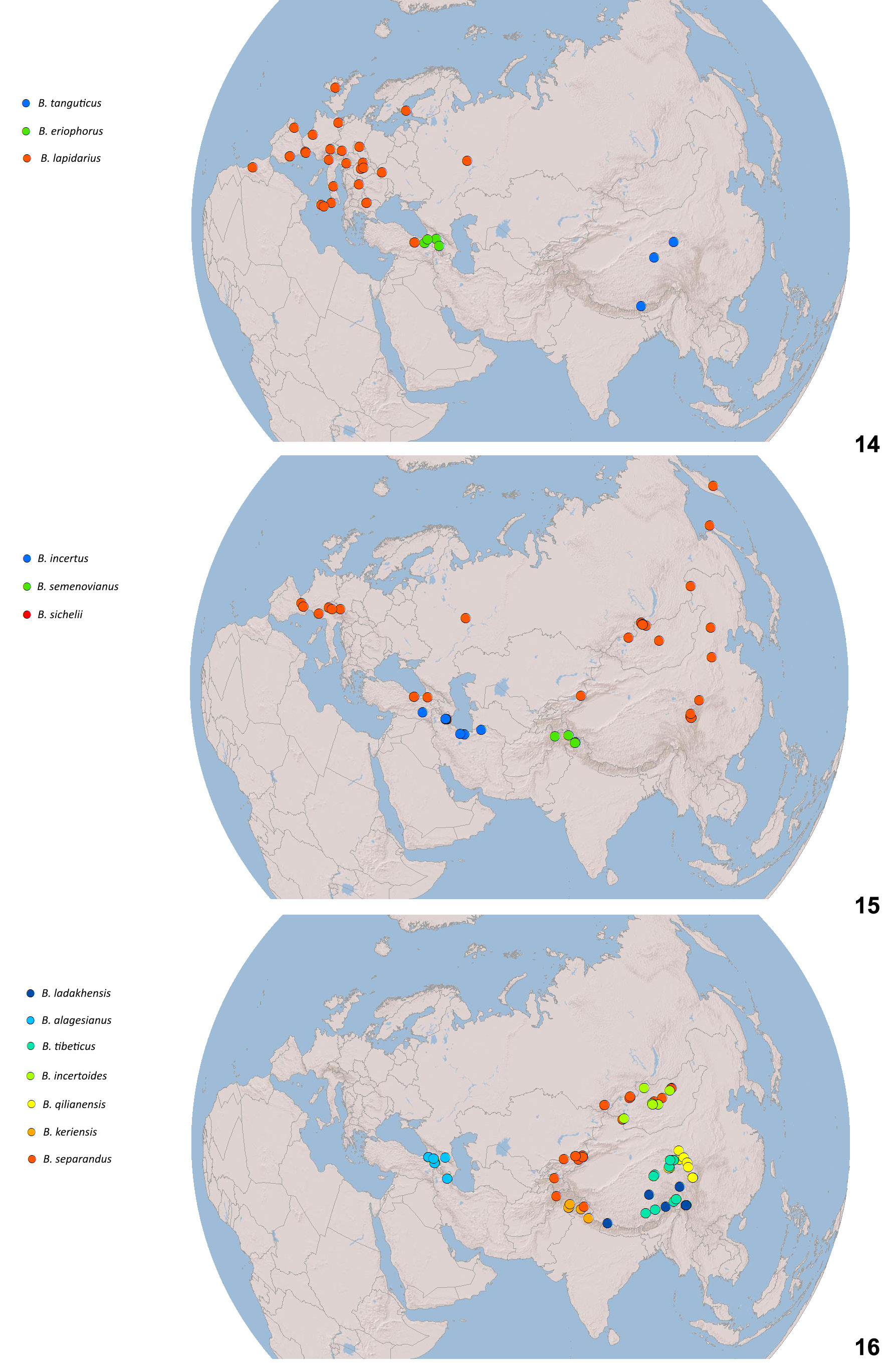 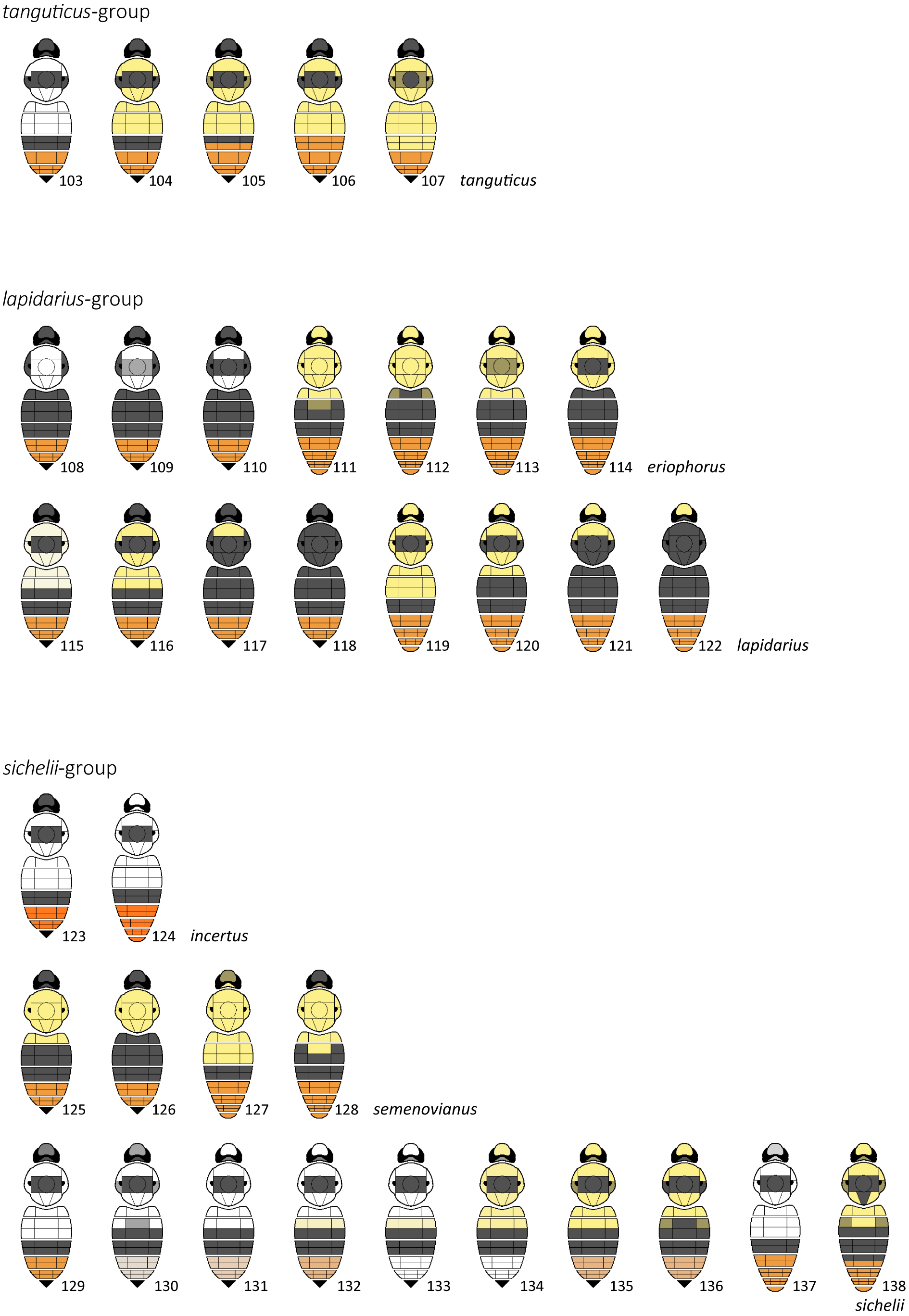 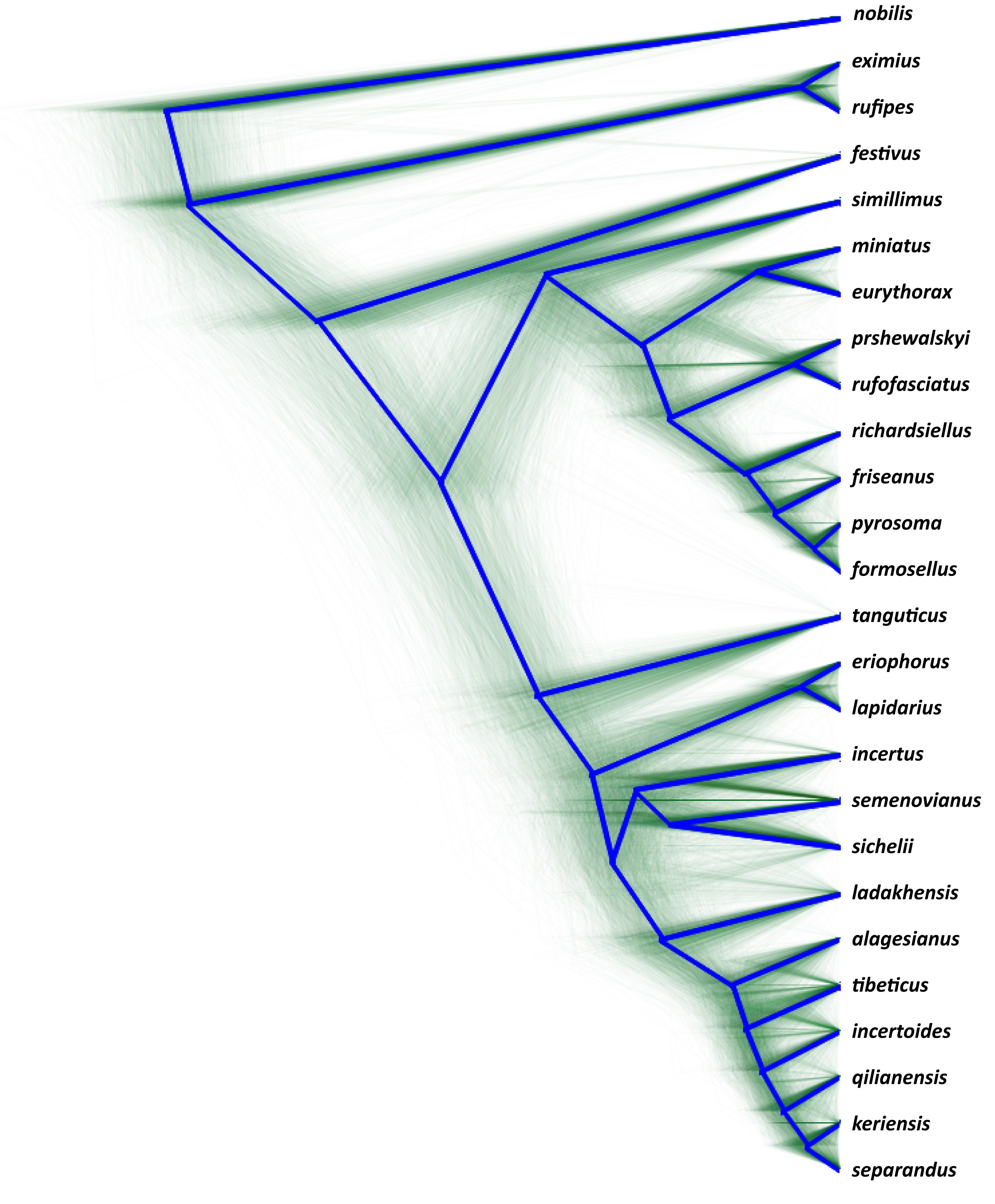 Fig. 21. A sample of 10 000 species trees from among 100 million trees for species of the subgenus Melanobombus von Dalla Torre, 1880 reconstructed with *BEAST from gene trees for the COI, 16S, opsin and PEPCK genes, displayed in green using Densitree, with the summary ‘root canal’ superimposed as a thick blue line. The outgroup B. nobilis Friese, 1905 is shown. 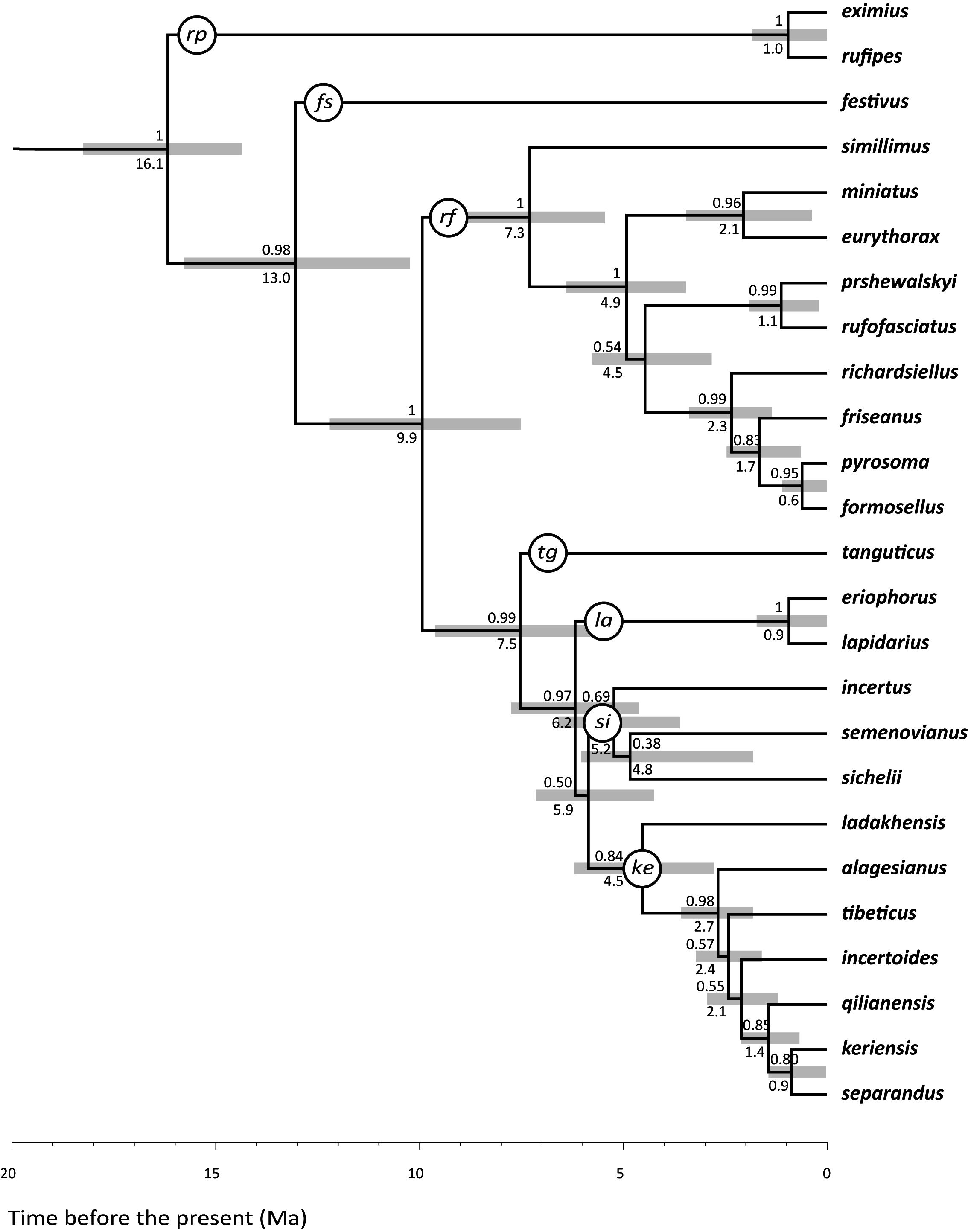 Fig. 22. Most likely dated phylogenetic (ultrametric) tree for the species of the subgenus Melanobombus reconstructed von Dalla Torre, 1880 with *BEAST from trees for four genes (COI, 16S, PEPCK, opsin) with B. nobilis Friese, 1905 as the outgroup (not shown), estimated as the maximum-clade-credibility tree among a sample of 10 000 species trees with a 1% burn-in out of 100 million MCMC trees. Values above the nodes are Bayesian posterior probabilities showing support for groups. Values below the nodes are estimated dates of divergence in Ma (millions of years before the present) calibrated from a molecular estimate for the date of crown divergence within the subgenus Melanobombus. Grey bars show the 95% confidence limits on the estimated dates of divergence. Species groups discussed in the text are labelled in circles: rp = rufipes-group; fs = festivus-group; rf = rufofasciatus-group; tg = tanguticus-group; la = lapidarius-group; si = sichelii-group; and ke = keriensis-group.