Prothorax: separated from head by a distinct, shallow neck. Dorsally without a pronotal ridge, lateral pronotal sclerites or other signs of pronotum (prn); also without lateral pronotal setae but with a line of 35–45 median pronotal setae (mpns) immediately anterior to prescutum between post­tergites. Post­tergites (pt) longitudinal, lightly sclerotised and elongate, each about 110 m long. Ventrally with a pair of strong cervical sclerites (cv) which possibly articulate anteriorly with a ventral projection (p) from ocular sclerite. Pleural ridge (plr 1) well developed and quite long, extending dorsally from articulation with coxa and fusing with cv posteriorly. Proepisternum (eps 1) well developed between cervical sclerite (cv) and pleural ridge (plr 1). Propleural ridge (plr 1) rather long, extending ventrally. Prosternum (stn 1) with a lightly sclerotised median ridge about 270 m long, which becomes slightly more sclerotised anteriorly; with a single sternal apophysis (stn 1 a) medially; without a transverse ridge. Ventrally without setae or pores.

Almost entirely membranous; segment I present ventrally; without caudal extensions (ce), margins of segment VII and VIII rounded. Tergites (at) present on all segments, represented by pairs of sclerotisations mediolaterally, these becoming smaller posteriorly; sternites (as) and pleurites absent. Dorsal abdominal setae (ads) short, in 2 groups medially on each segment; mostly 5–8 m long; with (hs) on segment I 12–22; II 4–12; III–VI 1–4; VII 3–6 and VIII 0–2. Loculate pores (lp) absent. Pleural setae not clearly divided into dorsal (dps) and ventral pleural groups (vps), with perhaps a total of 2 or 3 hs on segments IV–VIII. Ventral abdominal setae (avs) similar to those on dorsum but perhaps a little longer (8–15 m long), with (totals per segment) I–III 0; IV–VII 1 or 2 and VIII 4 or 5. Dorsally with a plate­like tergite medially on segment VII with a group of 13–18 large tubular ducts (tdc) (each about 6–8 m wide), each pore conical, with a broad inner ductule 25–27 m long with about 8 longitudinal ridges, giving it a corrugated appearance. Abdominal spiracles (asp) present on segments II–VIII, apparently very small and unsclerotised, and placed rather ventrally.

Genital segment: anus (an) hard to discern but present medially over penial sheath.

Penial sheath (ps) elongate triangular, more or less on apex of abdomen; about

The adult male of M. bisetosus Morrison   was redescribed by Beardsley (1968) and the above description is very similar. Beardsley provided a long discussion in which he compared the structure of M. bisetosus   with the descriptions of adult male Margarodes   , Pseudaspidoproctus   and Steingelia   given by Theron (1958). Beardsley’s discussion is excellent and the points that he made will not be repeated here. In addition to the structures he covered, there are a few others that seem to be worthy of comment.

Firstly, the antennae have fleshy setae, hair­like setae, capitate setae and antennal bristles but no satellite setae. This combination appears to be absent from all margarodoids (and aphids) but is present on many neococcoids suggesting, perhaps, a close link with the neococcoids.

Thirdly, one character­state which appears to be constant for male Margarodidae   , Xylococcidae and Neosteingelia sp.   but which is absent from the Monophlebidae   and Coelostomidiidae   is the group of very small setae on the dorsal surface of the scape and on the base of all the coxae. These groups of setae are also present on Matsucoccus   , suggesting a closer relationship to the first two families than to the Monophlebinae and Coelostomidiinae   .

Other characters which appear to be characteristic of the Matsucoccidae   are: (i) what are considered here to be fleshy setae on all legs; (ii) a single tarsal segment; (iii) presence of clavate claw digitules; (iv) trochanter campaniform sensilla more or less in a line and in a shallow groove; (v) each wing with a narrow alar lobe along wing margin; (vi) a single group of tubular ducts present dorsally on abdominal segment VII; (vii) abdominal spiracles small and poorly developed on segments II–VIII; (viii) thoracic spiracles poorly developed; (ix) hamulohalteres with hamuli along anterior margin; (x) aedeagus long and thin; (xi) absence of eversible endophallus; (xii) wing with a group of circular sensoria near base of costal vein; (xiii) wings with a series of parallel ridges; (xiv) derm of legs and antennae with transverse ridges (as on Steingelia   ), and (xv) absence of tarsal campaniform sensilla. 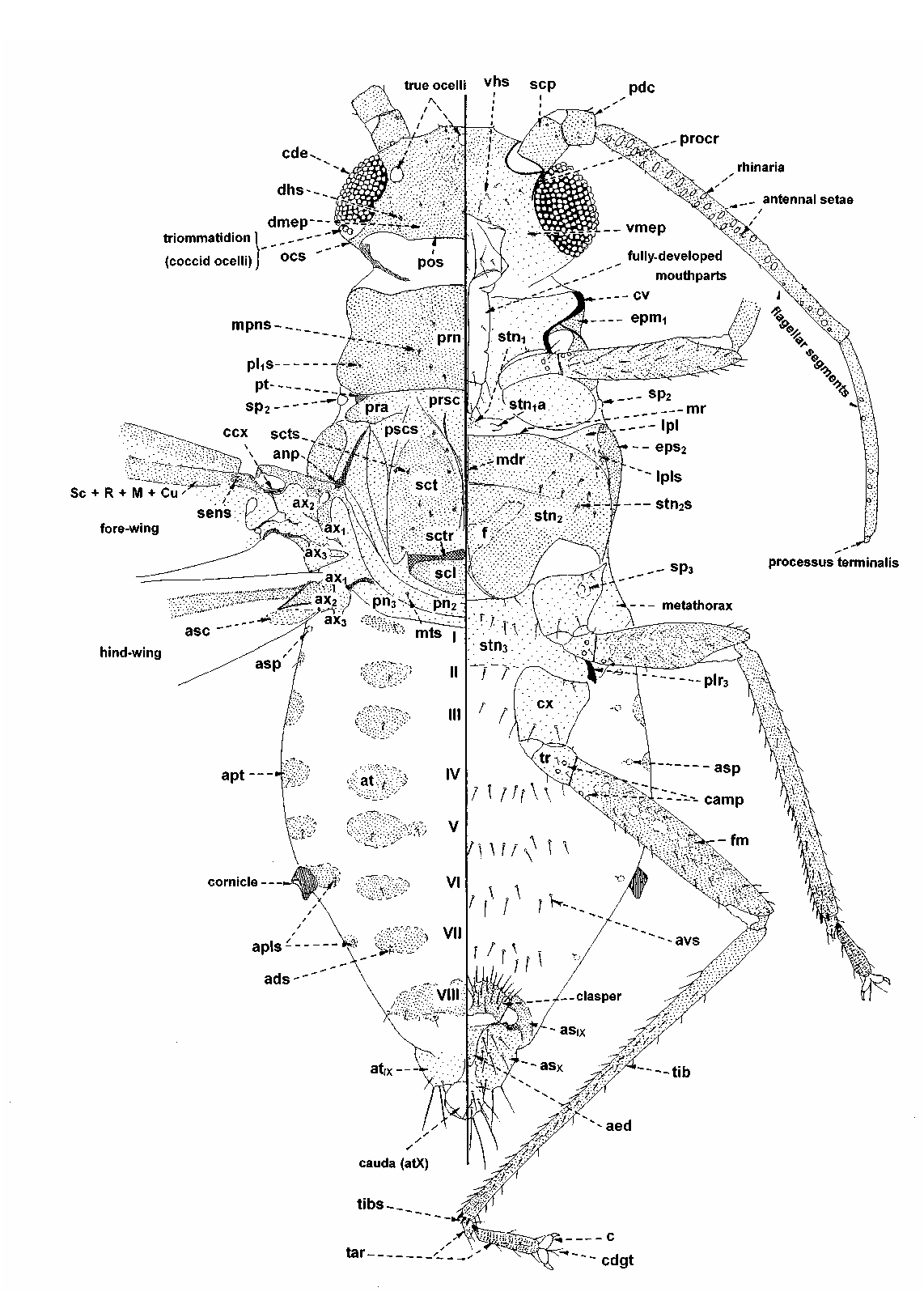 FIGURE 1. Male aphid (Eucallipterus tiliae (L.) with a few additions) labelled using the terminology used for Coccoidea in this paper (for abbreviations, see Table 2). Where similar structures are absent from Coccoidea, the name of the structure is given in full. Left side dorsal surface, right side ventral surface. 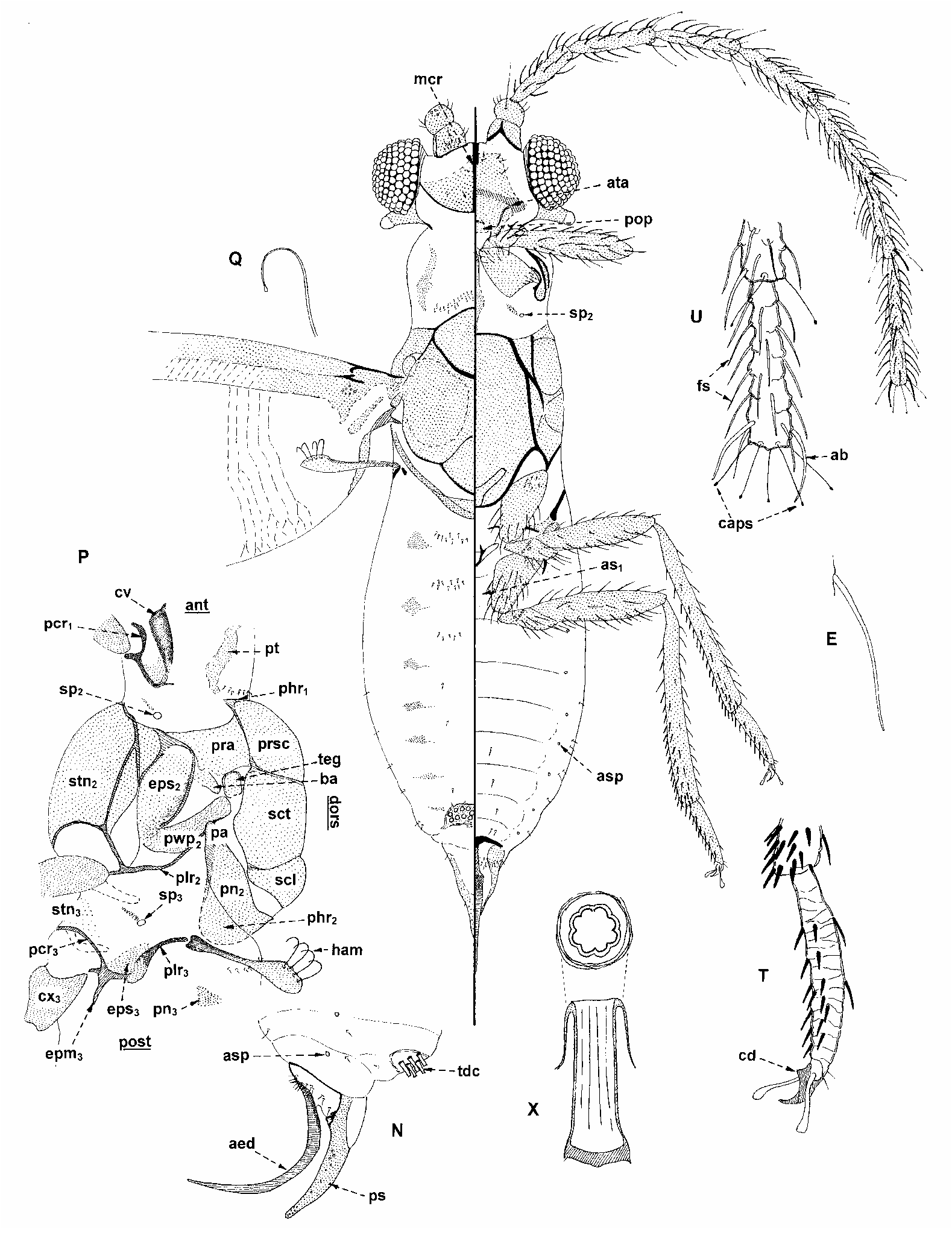 FIGURE 7. Male Matsucoccus josephi Bodenheimer & Harpaz. Letters as for Fig. 6 except P = side view of thorax, N = side view of end of abdomen and U = apical antennal segment.