Blake, James A., 2016, Kirkegaardia (Polychaeta, Cirratulidae), new name for Monticellina Laubier, preoccupied in the Rhabdocoela, together with new records and descriptions of eight previously known and sixteen new species from the Atlantic, Pacific, and Southern Oceans, Zootaxa 4166 (1), pp. 1-93: 67-70

Parapodia well developed in thoracic setigers; anteriorly set off from dorsum and adjacent segments by deep grooves; setiger 1 reduced in largest specimens, shifted ventrolaterally, with presetal notopodial lamella ( Fig. 34 View FIGURE 34 B); middle and posterior segments with parapodia reduced to low setal tori from which setae arise; setal fascicles of noto- and neuropodia close together throughout most of body.

Methyl Green stain. The stain is concentrated on the venter of the last 3–4 thoracic segments of the Larsen specimens, on what appear to be light-colored glandular areas; it de-stains rapidly. The Bransfield Strait specimens have a weak pattern that develops on the pre-setigerous area with a clear dorsal peristomial area surrounded by bands that extend ventrally ( Fig. 35 View FIGURE 35 D); segmental areas generally do not retain any stain.

Etymology. This species is named after Dr. Olga Hartman, polychaete systematist, whose monographs on Antarctic polychaetes inspired this author; Dr. Hartman also identified the first specimens of this species as Tharyx   sp. in Hartman (1967).

Remarks. Kirkegaardia olgahartmanae   n. sp. is an unusual cirratulid that is closely related morphologically to K. luticastella   and K. jumarsi   n. sp. in having a modified body and inhabiting mud balls in deep-water sediments. Kirkegaardia luticastella   has been described by Jumars (1975) and Blake (1996; this study) and can be readily compared with the two new species described herein. Superficially, all three species are similar in having an expanded pre-setigerous area and thoracic region, enlarged ovigerous segments in anterior abdominal segments of females, a narrow coiled and twisted posterior end, and denticulated capillary neurosetae first present from an anterior segment.

The three species differ in the development of the thoracic parapodia and exposure of the dorsal surface. In K. luticastella   , the thoracic parapodia are elevated but only weakly overlie the relatively smooth dorsal surface. In K. jumarsi   n. sp., the thoracic segments are narrow with the parapodia dorsally elevated over the dorsal midline such that the dorsal surface forms a shallow dorsal groove between the parapodia. In K. olgahartmanae   n. sp., the parapodia are well developed but do not extend dorsally above the mid-dorsal surface but leave a relatively smooth dorsum. Other differences between the three species are in the morphology of the peristomium. In both K. luticastella   and K. jumarsi   n. sp. there is only a single groove separating the peristomium into two annular rings; in K. luticastella   , this groove is best developed in smaller specimens and obscured or difficult to see in larger specimens; in K. jumarsi   n. sp. the posterior ring is laterally subdivided into three or four narrow ridges and the dorsal surface of the first ring is elevated into a domed crest, while ventrally it forms an enlarged lip around the mouth. In K. olgahartmanae   n. sp. there are two or three annular rings, best seen in smaller specimens, but visible with careful observation in larger specimens.

Methyl Green staining reactions differ between the three species. The holotype of K. jumarsi   n. sp. did not exhibit any MG staining reaction at all. In K. luticastella   , the tip of the prostomium retained stain as did the posterior borders of the two peristomial rings in the specimen from northern California, but there was no stain retention on the thoracic segments. In contrast, some specimens of K. olgahartmanae   n. sp. exhibited a banded pattern around a clear dorsal area on the peristomium; in addition, stain concentrated on the venter of three or four thoracic segments.

Biology. Kirkegaardia olgahartmanae   n. sp. is the third species described in a group of closely related deepwater cirratulids that occupy spiral burrows within mud balls that can be observed on the surface. Mr. Heiko Sahling, who provided specimens of K. olgahartmanae   n. sp. from the Bransfield Strait for examination, said in correspondence that: “The mudballs were observed with a video-sled in a very broad area; porewater and chlorophyll profiles indicate a strong bioturbation caused by these tiny creatures.” The mud ball habitat described by Mr. Sahling for these specimens is similar to that reported for K. luticastella   from the San Diego Trough by Jumars (1975 as Tharyx luticastellus   ).

As part of sediment results of the ANDEEP III survey, Howe et al. (2007) described the sedimentary environment from the Bransfield Strait Station 152 based on sediment cores, seafloor plan view images and sediment profile images. The site consists of about 45 cm of homogenous, watery, olive grey silty mud described by these authors as “fine-grained, intensely bioturbated with abundant biogenic mud balls” formed by the cirratulid polychaete, herein described as K. olgahartmanae   n. sp. The surface sediment texture is fine-grained mud consisting of 69% silt, 28% clay, and 3% sand. No phytodetritus or lithic clasts were visible and no bottom-current activity was noted from the camera or video. The sediment is rich in siliceous biogenic material consisting largely of diatoms and radiolarians (Howe et al. 2007).

Surface photographs of the seafloor at Station 152 were provided by Dr. Robert Diaz (Virginia Institute of Marine Science). The photographs were taken at a height of about 0.8 m above the bottom and imaged a visible area of approximately 8000 cm –2 or 0.8 m –2 ( Fig. 36 View FIGURE 36 A–B). By dividing the images into quadrants and counting the mud balls in each area, a maximal concentration of visible mud balls of approximately 198 per image or 1/40.4 per cm–2 is estimated. Extrapolating these results, there are approximately 250 mud balls visible over a surface area of 1 m –2 of the seafloor. However, there are likely many more present because tubes or structures formed by smaller worms would not be visible in the images. Sediment profile images ( SPI) or sideways views of the sediment, also provided by Dr. Diaz, are 15 cm wide x 20 cm deep. An example of the full width of such a SPI image is shown in Fig. 36 View FIGURE 36 C. Three large mud balls and two smaller ones are visible; additional mud balls are in three other SPI images ( Fig. 36 View FIGURE 36 D–F). Individual mud balls are irregular in shape and range from 1.6–2.6 cm in width based on direct measurements from the SPI images. Individual mud balls are 3-dimensional, however, and extend below the surface of the seafloor. The large mud ball to the right in Fig. 36 View FIGURE 36 C, for example, is approximately 3 cm in height x 2.6 cm in width. Within the mud balls, the worms likely live in a twisted or spiraled tube based on the shape of individual worms and description of the habitus of K. luticastella ( Jumars 1975)   . All of the mud balls exhibit an irregular surface with lateral silty outgrowths that appear to be similar to the “digitiform external protuberances” of the tube within the mud ball as described by Jumars (1975: 343). However, for K. olgahartmanae   n. sp., these outgrowths are silty and bulbous in appearance ( Fig. 36 View FIGURE 36 C–F) rather than elongate protuberances.

Worms from the Eltanin survey in the Bransfield Strait were encased in a membranous tube material similar to that of K. tesselata   and K. baptisteae   described elsewhere in this paper. This suggests that the worms produce spiraled burrows that are lined with a soft, pliable, membranous mucoid substance. In describing K. luticastella Jumars (1975: 342)   stated that “The body is helically coiled as far as its mid-length, where it is bent through 180°, and is again coiled parallel with the anterior half, so that the head and pygidium are juxtaposed. Preserved specimens retain this posture, and are withdrawn into the lower half of the robust, mucus-lined tubes.” This spiral or twisted arrangement of the body appears to be similar in K. olgahartmanae   n. sp. because the bodies of complete specimens are clearly spiraled and also have filamentous tube materials lining their burrows within the mud balls.

The type collection of K. olgahartmanae   n. sp. was selected from samples collected from the Greenpeace Trough in the Larsen Ice Shelf A area on the east side of the Antarctic Peninsula in an area newly open to the sea due to collapse of the ice shelf; it was discovered by multibeam bathymetry during a survey in May 2000 ( Domack et al. 2001). This habitat differs significantly from the Bransfield Strait location where the worms form dense populations visible by the mud balls on the surface of the seafloor. In contrast, the seafloor in the Greenpeace Trough appeared to be in a constant state of disturbance due to the presence of numerous deposit-feeding elasapoid holothurians, Elpidia glacialis Théel, 1876   , which were observed by video to be constantly moving over the surface. Several of the holothurians were observed on the surface of 10 x 10 x 50 cm megacore tubes collected from the site (Blake & Maciolek unpublished). Presumably as a result of this type of disturbance, dense colonies of K. olgahartmanae   were not present at this location. These nearshore sediments were described from 20‒25 cm cores as coarse-grained, overlying fine-grained silt and clay size sediments with depth ( Gilbert & Domack 2003). The type collection consists of seven specimens collected from three locations in the trough. No specimens were collected in the nearby Prince Gustav Channel or other locations in the Larsen Ice Shelf A area outside the Greenpeace Trough. However, there have been few benthic surveys along the eastern side of the Antarctic Peninsula and it is likely that with further sampling the species will be found to have a more extensive distribution.

Large eggs measuring up to 220 µm in diameter were observed in specimens from all surveys. The eggs occurred mostly in the large moniliform segments of the anterior abdominal region. Large eggs suggest a direct development for the species.

Distribution. Known from both sides of the Antarctic Peninsula: Larsen Ice Shelf A area, from a nearshore trough, 668–868 m; from the Bransfield Straits, 681–2000 m, where the species occupies mud balls visible on the surface. 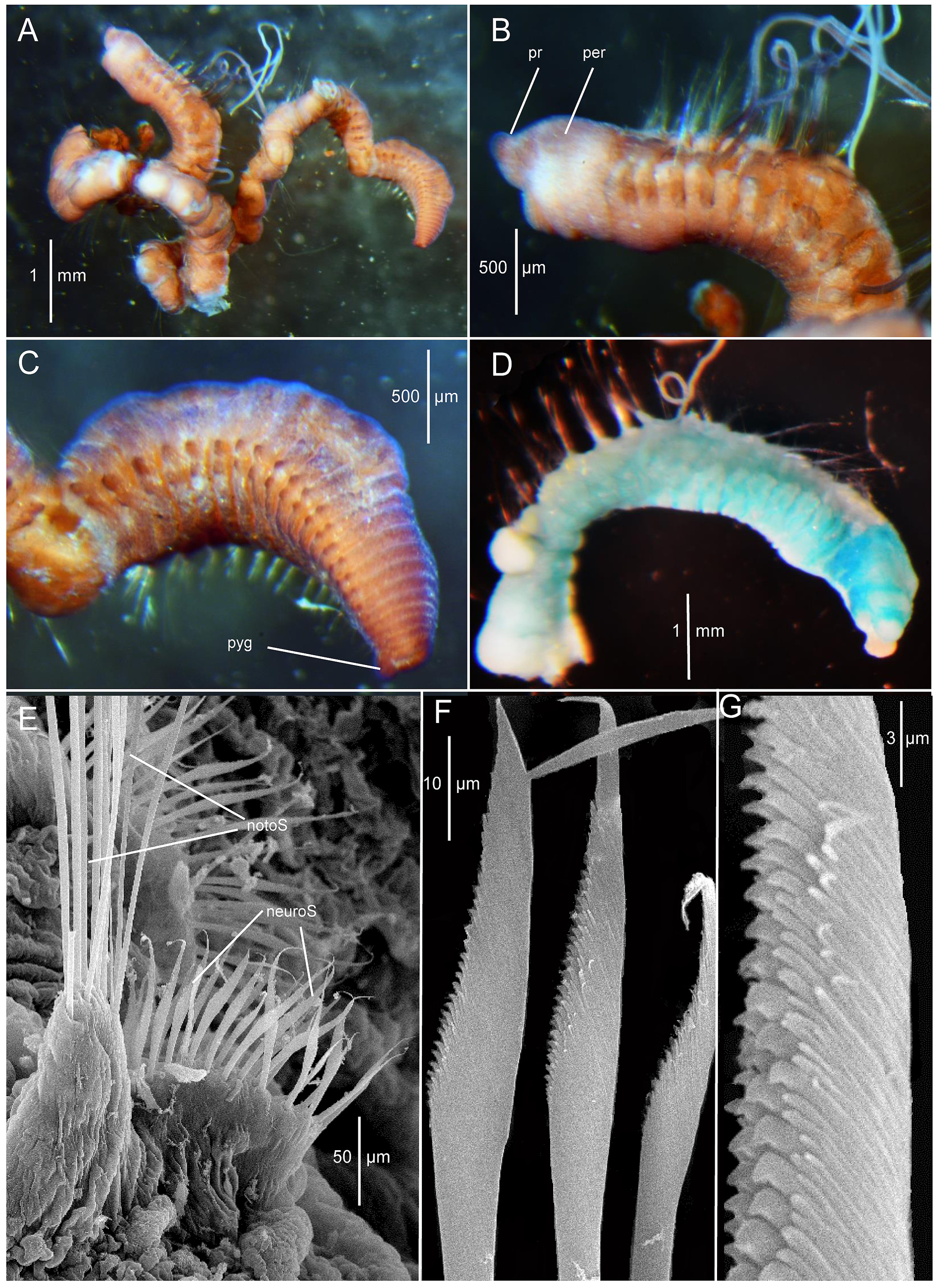