Blake, James A., 2016, Kirkegaardia (Polychaeta, Cirratulidae), new name for Monticellina Laubier, preoccupied in the Rhabdocoela, together with new records and descriptions of eight previously known and sixteen new species from the Atlantic, Pacific, and Southern Oceans, Zootaxa 4166 (1), pp. 1-93: 50-52

Parapodia low mounds, shifted somewhat dorsal in thoracic segments and first few abdominal segments, thereafter lateral ( Fig. 25 View FIGURE 25 B). Setae all capillaries, consisting of narrow setae with smooth blades in thoracic segments and shorter setae with broad base tapering to narrow capillary tip, with fine denticles along one edge of expanded base in middle and posterior segments, denticles not evident along narrow apex; denticles present on both noto- and neurosetae from about setiger 20, or middle of body; denticles not visible on capillaries of last 4–5 setigers. Denticles weakly visible at 400x, best observed at 1000x; individual denticles numerous, with sharp points directed basally ( Fig. 25 View FIGURE 25 D); notosetae with denticles directed ventrally and denticles of neurosetae directed dorsally, vis-à-vis. Setae numbering 6–8 in both noto- and neuropodia in thoracic segments, 5–7 in middle body segments; and 4–5 in posterior segments.

Etymology. The species name fragilis   , is from Latin, and refers to the narrow fragile nature of this species.

Remarks. Kirkegaardia fragilis   belongs to a group of species in which the parapodia are not elevated over the dorsum of the thoracic region and no dorsal groove is produced; further, the first pair of branchiae occur on setiger 1 and, apart from some retention of stain on the prostomium, there is effectively no distinctive MG staining pattern for this species.

This species has no close congeners except perhaps K. carolina   n. sp., which is another small, threadlike deepwater species that occurs in upper slope depths off North Carolina   and that also has tessellated tubes and branchiae from setiger 1. K. fragilis   n. sp. differs from K. carolina   n. sp. in having instead of lacking denticulate notosetae, in lacking instead of having annular rings on the peristomium, and by having a more expanded posterior end.

Biology. The type specimens were isolated from the 0–2 mm profile of 10-cm subcores from the box core, suggesting that this species inhabits sediments near the surface. Thin membranous tessellated tubes were found with non-type specimens in a sample from Sta. 2-93 suggesting that this species extends its branchiae into the overlying water from within the tube. The holotype is a male with sperm packets in the coelom that contain numerous sperm with small rounded nuclei.

Distribution. Known only from the Pacific Ocean in abyssal depths 4858–4879 m. 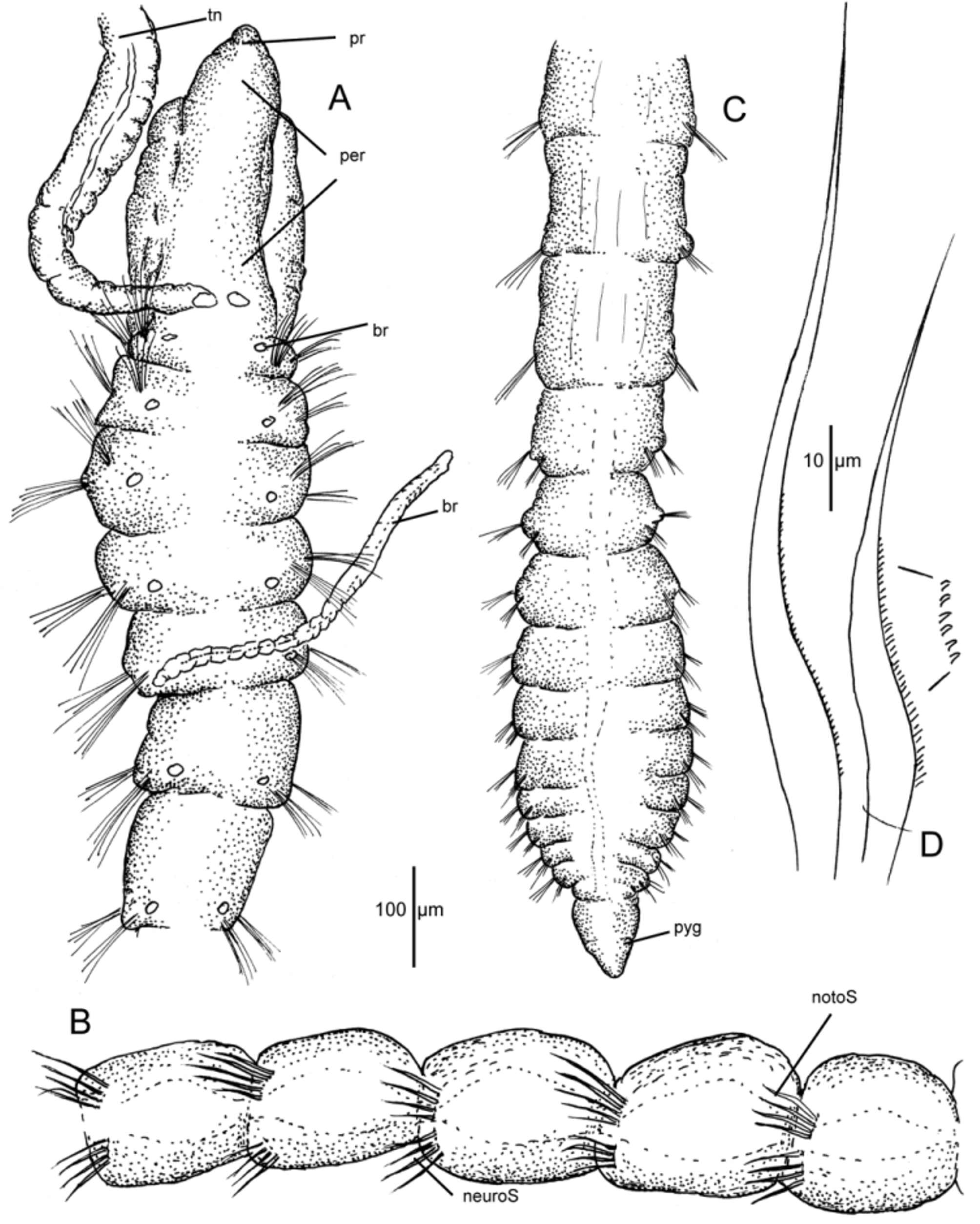