Blake, James A., 2016, Kirkegaardia (Polychaeta, Cirratulidae), new name for Monticellina Laubier, preoccupied in the Rhabdocoela, together with new records and descriptions of eight previously known and sixteen new species from the Atlantic, Pacific, and Southern Oceans, Zootaxa 4166 (1), pp. 1-93: 38-42

Etymology. This species is named for Ms. Margaret (Maggie) Dutch, Manager of the State of Washington Puget Sound Benthic Monitoring Program and a former colleague; she provided specimens of this species and others from the MSMP reference collections.

Remarks. Kirkegaardia dutchae   n. sp. from the northeastern Pacific is most closely related to K. baptisteae   from along the U.S. Atlantic shelf and slope in having a similar size and shape to the pre-setigerous region, parapodia limited to lateral shoulders situated lower than the broad dorsal surface, and prominent glands along the venter of thoracic segments.

The two species differ in that K. baptisteae   has ventral thoracic glands that are naturally light tan in color and do not produce a MG staining pattern of any kind, with the stain disappearing entirely in clean alcohol; however, these glands may retain pink coloration from Rose Bengal for a time after storage. In contrast, the same glands of K. dutchae   n. sp. retain a distinct MG pattern on the venter of the thoracic region after differentiation. Additional differences include denticulated capillaries limited to neuropodia in K. dutchae   n. sp. instead of both noto- and neuropodia as in K. baptisteae   . Further, the denticles are limited to an expanded knob on the shaft of K. dutchae   n. sp. whereas in K. baptisteae   the denticles are distributed along most of the shaft. Additionally, the first and second pair of branchiae are on setiger 1 in K. dutchae   n. sp.; whereas in K. baptisteae   the first pair of branchiae are lateral to the dorsal tentacles on the posterior margin of the peristomium and only the second pair are on setiger 1. K. dutchae   n. sp. is also similar to K. tesselata   , but differs in lacking a mid-thoracic ridge. All three species, however, are now known to have tessellated tubes.

Biology. Two paratypes from Station 181, June 1998, had numerous sperm packets in the coelom; one paratype from Sta. 182 also collected in June 1998 was packed with yolky eggs having a visible germinal vesicle and measuring 96–127 µm; a paratype from Sta. 189, also collected in June 1998, had both small oocytes ca. 20-µm diameter and larger ova 93–101 µm diameter in adjacent segments. These data suggest that gametes were not fully mature in June; it is likely spawning and recruitment occur later in the summer. The specimens from Sta. 213 were labeled Monticellina tesselata   in the MSMP voucher collection because of the surrounding tessellated tube. However, the two specimens agree well with Kirkegaardia dutchae   n. sp. and not K. tesselata   because a peristomial ridge is present and a mid-thoracic ridge is absent instead of absent and present, respectively, as in K. tesselata ( Blake 1996)   . Kirkegaardia dutchae   n. sp. is herein recognized as one of several closely related species having the tattered or tessellated tubes first reported for K. tesselata   , a California species.

Distribution. Known only from the Puget Sound in shallow depths, 14– 82 m. 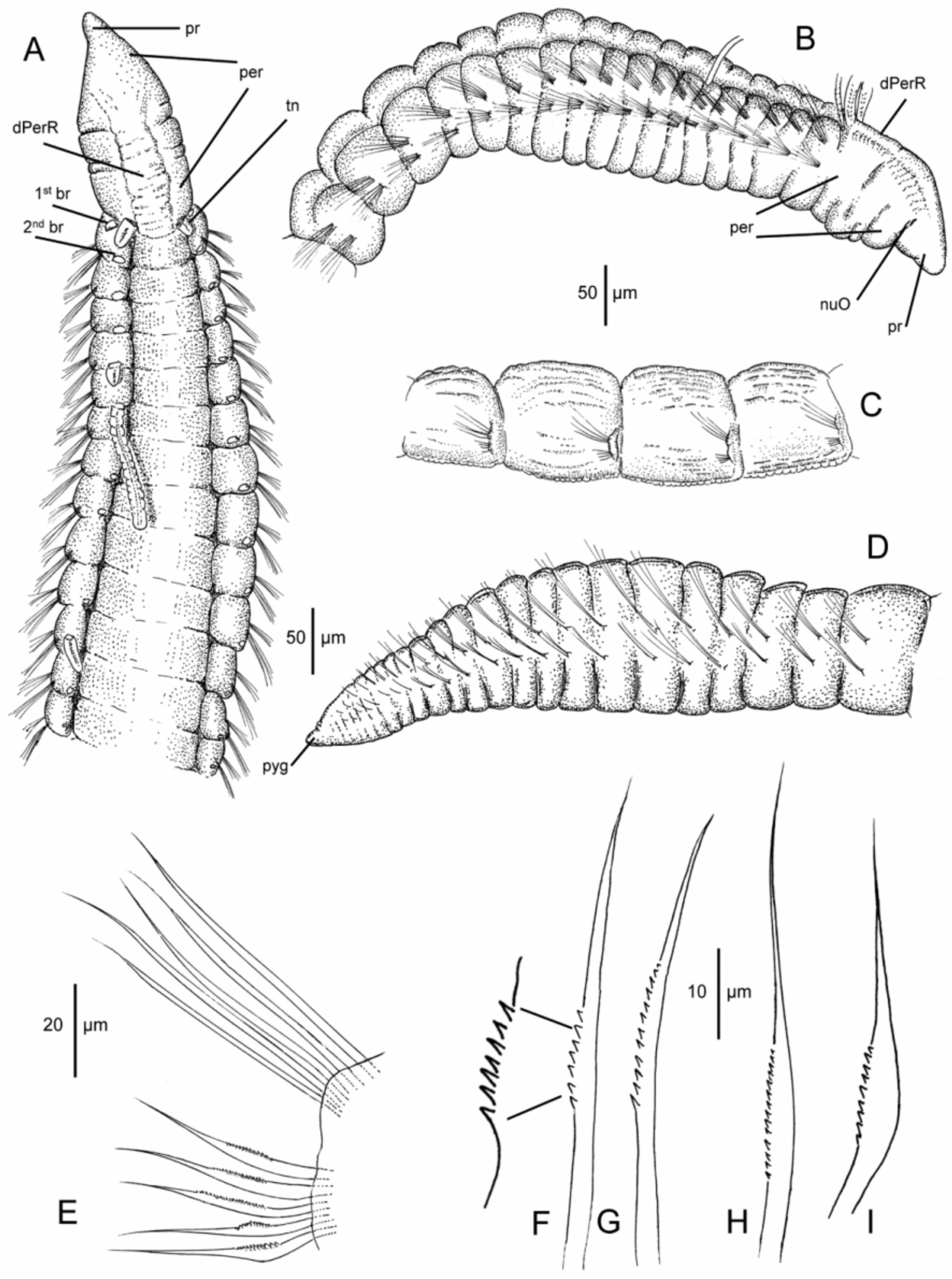 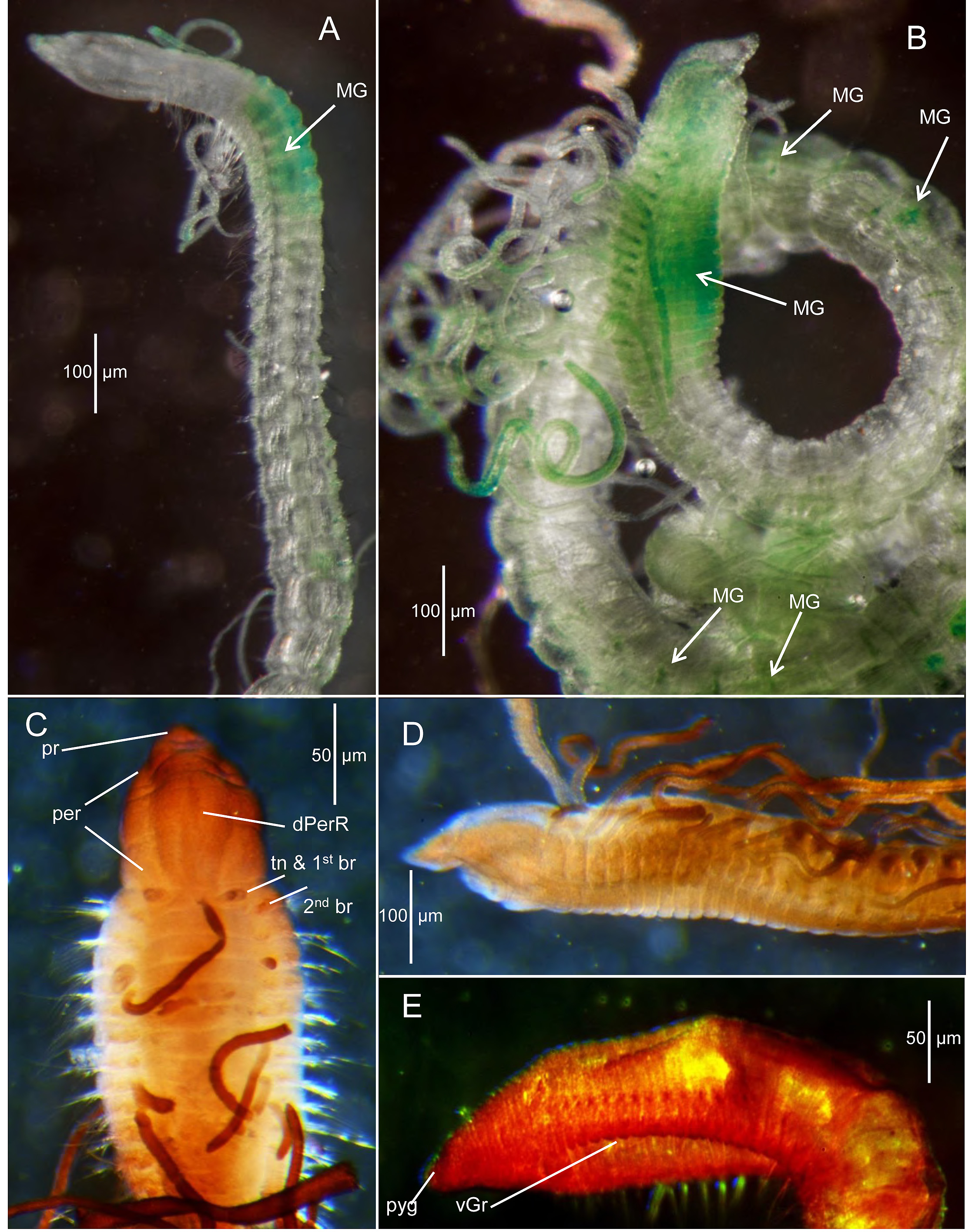