Blake, James A., 2016, Kirkegaardia (Polychaeta, Cirratulidae), new name for Monticellina Laubier, preoccupied in the Rhabdocoela, together with new records and descriptions of eight previously known and sixteen new species from the Atlantic, Pacific, and Southern Oceans, Zootaxa 4166 (1), pp. 1-93: 10-14

Setae relatively short, inconspicuous along body, those of anterior 25 segments slender capillaries in a single row, with up to 15–20 per ramus of both noto- and neuropodia (20–30 per ramus in paratypes provided to him by Dr. Kirkegaard, as noted by Laubier 1966: 637), with fewer setae more posteriorly, reduced to 5–10 per ramus in some paratypes, further reduced to 2–4 setae in far posterior segments. Capillaries relatively short throughout, similar in length and shape within a fascicle, broader basally, abruptly tapering but not aristate distally; notosetae longer than neurosetae, with fine denticles in broad basal part, these not continuing or at least not visible in thin apical extension; most neurosetae shorter than notosetae but similar with fine denticles along one edge of shaft ( Fig. 3 View FIGURE 3 E); setae arranged within fascicles such that denticles of notosetae directed ventrally and those of neurosetae directed dorsally, vis-à-vis ( Fig. 4 View FIGURE 4 A–C). In posterior abdominal setigers, ventral most 2–3 neurosetae thicker, with very broad base and thicker denticles similar to those described by Kirkegaard (1959: Fig. 3 View FIGURE 3 ). Far posterior setigers with denticles generally thicker than those of anterior and middle abdominal setigers ( Fig. 4 View FIGURE 4 B–C). First appearance of denticulated setae difficult to detect without dissecting numerous segments, but present by at least setigers 15– 20 in paratypes.

Methyl Green stain. A left lateral diagram of the holotype depicts the general pattern of MG staining ( Fig. 3 View FIGURE 3 C): tip of prostomium staining dark green with rest of prostomium and most of peristomium evenly speckled light green except for darker anterior area between nuchal organs. Anterior segments with ventral diffuse greenish area, but stain mainly limited to anterior dorsum and dorsolateral areas of thorax ( Fig. 3 View FIGURE 3 C); rest of body with stain dorsally concentrated in segmental constrictions, ending just behind parapodia; ventrally with narrow, elongate, diffuse mid-ventral spot on each segment, fading out on posterior segments. Dorsal channel between parapodia does not stain. Same general pattern present on paratypes, but not as prominent.

Remarks. According to a summary of the type material of Cirratulus dorsobranchialis   provided to me by the late Dr. Mary E. Petersen (letter dated 14 July 1985) there were originally 13 paratypes of C. dorsobranchialis   designated by Dr. Kirkegaard in addition to the holotype. Of these, three paratypes were loaned to Dr. L. Laubier and were commented on by him ( Laubier 1966); however, the paratypes were not returned and Dr. Laubier subsequently informed Dr. Kirkegaard that they were lost. In addition, three paratypes were loaned to Dr. A. Eliason and these were also lost. Of the remaining seven paratypes, Dr. Petersen sent three to me for evaluation ( Blake 1991); these were returned to Dr. Petersen. While working on cirratulids for the California Taxonomic Atlas, I had occasion to review the notes and sketches of the paratypes examined earlier and asked Dr. Petersen to check a few details, which she kindly provided in April 1994. This reexamination resulted in the conclusion that the synonymies proposed in Blake (1991) were not correct; comments to this effect were stated in ( Blake 1996: 318). In September 1997 during a short visit with Dr. Petersen in Copenhagen, I was able to examine the holotype and other specimens of C. dorsobranchialis   from Dr. Kirkegaard’s collection and prepared some additional notes and sketches. As part of a review of Dr. Petersen’s research materials following her death, I discovered her own notes and sketches of the C. dorsobranchialis   types, which supported my own conclusions. Figure 4 View FIGURE 4 A–E is based on Dr. Petersen’s pencil sketches of selected paratypes and prepared slides of parapodia.

The type specimens described here differ in several important aspects from the description by Kirkegaard (1959). Most importantly, Kirkegaard (1959: Fig. 2 View FIGURE 2 ) illustrated a worm with 2–3 anterior achaetous annulations; these were not mentioned in the text. The peristomium of the holotype and paratypes had only a smooth surface with no obvious annulations apparent, although faint lines were visible on one paratype ( Fig. 4 View FIGURE 4 E). The obvious annulations in Kirkegaard (1959: Fig. 2 View FIGURE 2 ) might have been due to misinterpretation by the artist who illustrated the specimens for Dr. Kirkegaard. On the same figure, some branchiae are illustrated with inflated tips; these also do not occur on the types examined and were also noted to be absent on the paratypes examined by Laubier (1966); Day (1961) also indicated that such branchiae were not present on the South African specimens he examined.

The short, strongly dentate setae illustrated by Kirkegaard (1959: Fig. 3 View FIGURE 3 ) were not observed during my initial study of the type material and were not observed by Laubier (1966) in the paratypes he examined and were not observed in specimens identified as Tharyx dorsobranchialis   by Day (1961, 1967); instead, only finely serrated setae were observed. It was not until individual parapodia from different parts of the body of paratypes were carefully examined that setae with conspicuous denticles were observed at 400x ( Fig. 4 View FIGURE 4 A–C). Most of the denticulated setae along the body have only numerous fine serrations along the shaft ( Fig. 3 View FIGURE 3 E) and for the longest and thinnest setae, they were only barely apparent at 400x.

The most conspicuous difference between Kirkegaardia dorsobranchialis   and K. heterochaeta   noted by Laubier (1966) was the presence of distinct peristomial rings in the first species and none in the second. However, the peristomial rings illustrated by Kirkegaard (1959: Fig. 2 View FIGURE 2 ) are not present on the holotype and only vague rings were observed on one of the paratypes of K. dorsobranchialis   . Thus, other characters are required in order to distinguish between the two species.

The most conspicuous difference between the two species, however, is the MG staining pattern. Kirkegaardia heterochaeta   has a prominent oval green patch on the dorsum of the second half of the peristomium prior to the origin of dorsal tentacles and a spectacular dark blue pattern concentrated on the thorax as stripes that begin middorsally and continue down each side with the most intense stain on the venter of the thoracic region. In contrast, the staining pattern of K. dorsobranchialis   is less intense, with the tip of the pre-setigerous region darkly stained and the rest of the prostomium and peristomium evenly covered with light speckles. The thoracic segments have a mid-ventral greenish area, but not the intense blue of K. heterochaeta   , and stripes are not formed. A narrow, elongate, diffuse mid-ventral spot is present on abdominal segments of both species.

Recent records of K. dorsobranchialis   from the Mediterranean by Çinar (2005) and others have not been confirmed. Given the large number of species identified as part of this study from worldwide locations and the differences between the present description of the type material and the original description by Kirkegaard (1959), it is likely that non-African records of K. dorsobranchialis   belong to other species.

Among other species of Kirkegaardia reviewed in this study, K. dorsobranchialis   is closest morphologically to K. carinata   n. sp. from deep-water off northern California, K. chilensis   n. sp. from offshore Chile, and K. cryptica ( Blake, 1996)   from southern California shelf and slope depths. All of these species have an entirely smooth peristomium without either ridges or annular rings. Of these, K. dorsobranchialis   and K. cryptica   have a smooth mid-dorsal channel; whereas, K. carinata   n. sp. and K. chilensis   n. sp. have a prominent ridge within the channel. K. cryptica   differs most noticeably from K. dorsobranchialis   in (1) having a longer pre-setigerous area of 1.9:1 length-to-width ratio instead of up to 1.5:1, (2) having few sharply pointed, widely spaced denticles on the neurosetae instead of numerous larger denticles that are tightly spaced, and (3) several differences in the MG staining patterns.

Biology. The species is recorded from sand and mud in False Bay , South Africa. Other records do not have any sediment data. Short-headed sperm were recorded for this species by Petersen (1999), based on the type collection from Angola, Bay off Lobito in 27 m; presence of sperm was also confirmed as part of my examination of the holotype   . 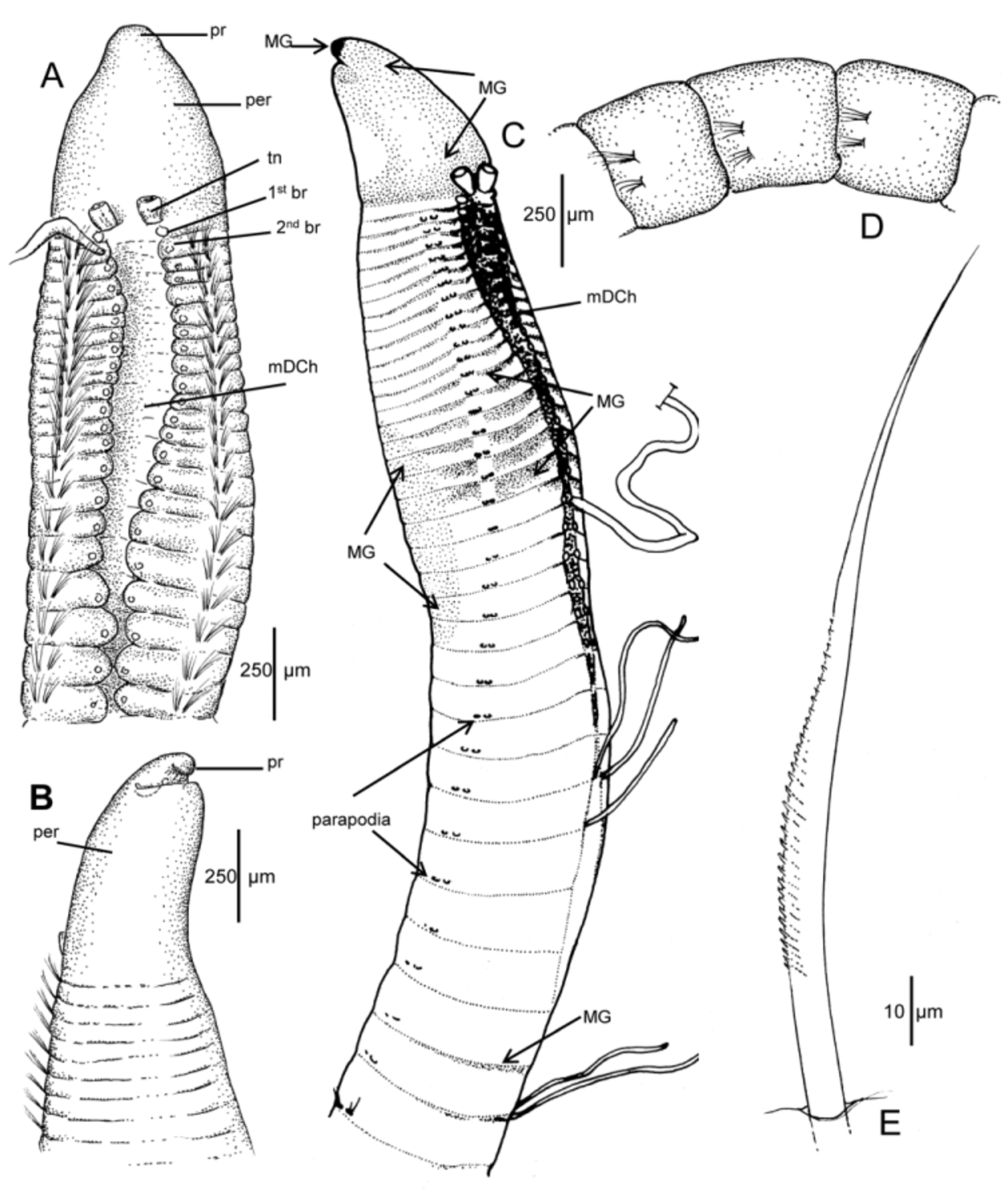 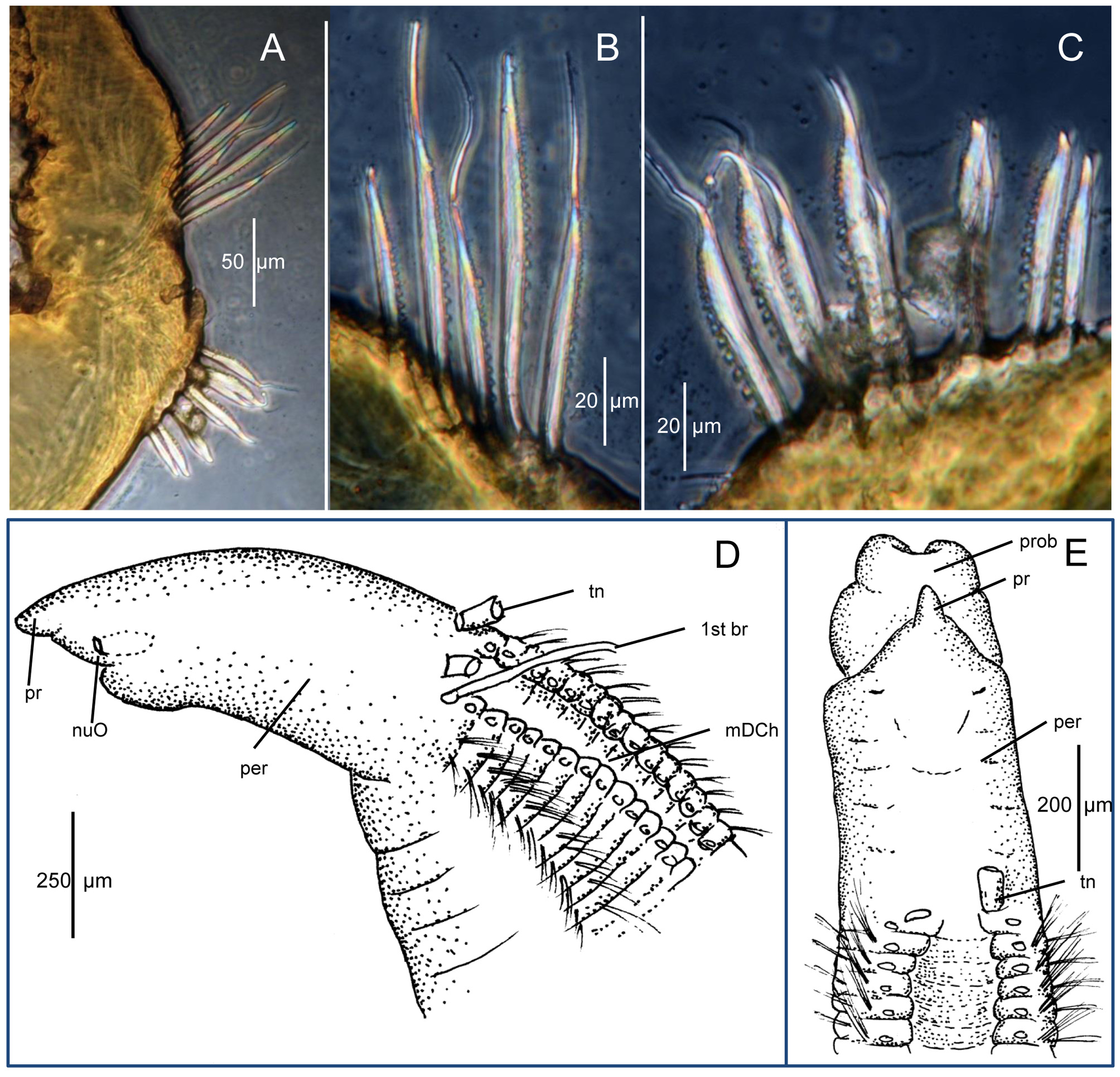