Colour. Both specimens studied are slightly immature and, thus, the upper and ventral surface brown to dark brown. We assume, however, that mature specimens, as other similar species of the memnonius  -group and in particular H. longicornis  , are blackish brown or even black, with some parts being lighter brownish. Despite this immaturity, it can be recognised that the head has the anterior margin of clypeus lighter, as well as a rather broad transverse stripe on frons; the antennal articles are lighter brownish and darkened apically beginning with the fifth; most probably, the gula is lighter than the genae, and the sides of pronotum, at least the rim lighter than its disc; finally, the legs seem to be lighter brownish than most other parts of the venter.

General surface sculpture. Entire surface covered by fine reticulation of small, more or less round meshes, however, in contrast to H. longicornis  , and especially to H. melanarius  , not appearing dull at all, but shiny throughout, even on apex of elytra.

Head. Punctation simple and sparse, denser and coarser in two clypeal grooves between anterior margin of eyes; punctation on frons and vertex absent. Second article of antennae almost as long as third and fourth together; third and fifth articles of same length, fourth one shorter than these.

Pronotum. Punctation near margins coarse and rather dense; inside hind angles with an impression, however, not nearly as deep as in H. obsoletus  ; here coarse punctures still denser and longitudinally prolonged in part. Disc of pronotum with only a few fine punctures, but a distinct scratch in its centre. Lateral margins in posterior half almost straight and converging anteriorly, stronger rounded anteriorly; lateral beading rather broad, more or less equal to half of diameter of antennal articles.

Elytra. Punctation simple and almost evenly distributed, punctures rather coarse, only finer beside suture and on apex; on disc distance between punctures ca. 1.5 that of their diameter; puncture lines almost imperceptible. Beading of margins in lateral view distinct, epipleuron not visible to humeral angle; lateral margin weakly ascending to humeral angles. Epipleura with a few coarse punctures. Setae on elytra present, but extremely fine and almost imperceptible.

Ventral surface. Sides of metasternum, metacoxae, and abdominal sternites with fine microreticulation, almost imperceptible in middle of third sternite, strongly impressed on last sternite, however, entire surface shiny. Large parts of venter provided with fine sparse yellowish setae, however these are rather indistinct. Prosternal process with a transverse ridge between procoxae, anteriorly not prolonged as a convexity, but flat and here provided with some very weak transverse grooves; shape of blade (behind procoxae) lanceolate, longitudinally carinate, sides narrowly flattened, here with a few coarse punctures and short setae; apex of process shortly rounded. Metasternum, metacoxae, and first two abdominal sternites with coarse punctures, however, centre of metasternum and areas right and left of it without punctures. Third to sixth sternite with punctures sparser and smaller. Metacoxal lines divergent anteriorly, ending short before posterior margin of metasternum; intralinear space with a few coarse and in part longitudinally prolonged punctures, in posterior half with distinct suberect yellowish setae. Posterior margin of each metasternal process almost straight, but both forming an obtuse angle ( Fig. 12View FIGURES 4 – 13. 4 – 6), thus, similar to those of H. melanarius  (cf. Fig. 194 in Nilsson & Holmen 1995). Protibia provided with one line of coarse punctures.

Female. Gonocoxosternum as in Fig. 11View FIGURES 4 – 13. 4 – 6; gonocoxae ( Fig. 10View FIGURES 4 – 13. 4 – 6) without any angularity on inner side (cf. Figs. 78–80 in Fery 1999). Reticulation on head and pronotum slightly more strongly impressed than in males, nevertheless, surface not appearing dull. Protarsal claws evenly curved. Transverse grooves on base of prosternal process more distinct than in male holotype, this, however, possibly due to individual variation.

Distribution. Turkey; known only from the type locality.

Etymology. Named for Necla, the first name of the senior author's mother.

Discussion. Hydroporus neclae  is most similar to H. longicornis  and H. melanarius Sturm. It  can be separated from the latter by the narrower habitus (cf. Figs. 1, 3View FIGURES 1 – 3), shape of the median lobe (cf. Figs. 4, 6View FIGURES 4 – 13. 4 – 6), and the surface of the cuticle which is reticulate in both species, but dull in both sexes of H. melanarius  , and shiny in H. neclae  . Both the holotype and paratype have the TL-H more than twice as long as the WP, a feature which was used by Nilsson & Holmen (1995: 44) to separate H. longicornis  from H. melanarius  , and, thus, H. neclae  's body shape clearly fits more that of the narrowly elongate H. longicornis  than that of the broader H. melanarius  . The shape of the hind margins of the metacoxal processes is more or less the same in both species ( Fig. 12View FIGURES 4 – 13. 4 – 6). On a first glance, H. neclae  could also be taken for a member of the H. longulus  -group, but these have the hind margins of the metacoxal processes distinctly sinuate and the males in most cases have an asymmetric median lobe (cf. e.g. that of H. erzurumensis  , Fig. 5View FIGURES 4 – 13. 4 – 6 in Erman & Fery 2000).

Notes: The drawings of the ventral aspect of the median lobe of H. longicornis  in Schaeflein (1972: 31) and Nilsson & Holmen (1995: 54) are somewhat misleading since the narrowing before the apex is figured as too weak; this may be due to a slightly different angle of observation. Foster & Angus (1985: 12), Friday (1988: 83), and Fery (1999: 257) provide more appropriate figures of the median lobe since the apex is figured in a more or less perpendicular view.

Finally, it shall be mentioned that we have also taken into consideration that the new species might be H. jacobsoni  , a species which was described from the adjacent Caucasian mountains. The study of a female syntype revealed, however, that this latter species has strongly sinuate hind margins of the metacoxal processes and, thus, belongs to the longulus  -group of genus Hydroporus  . 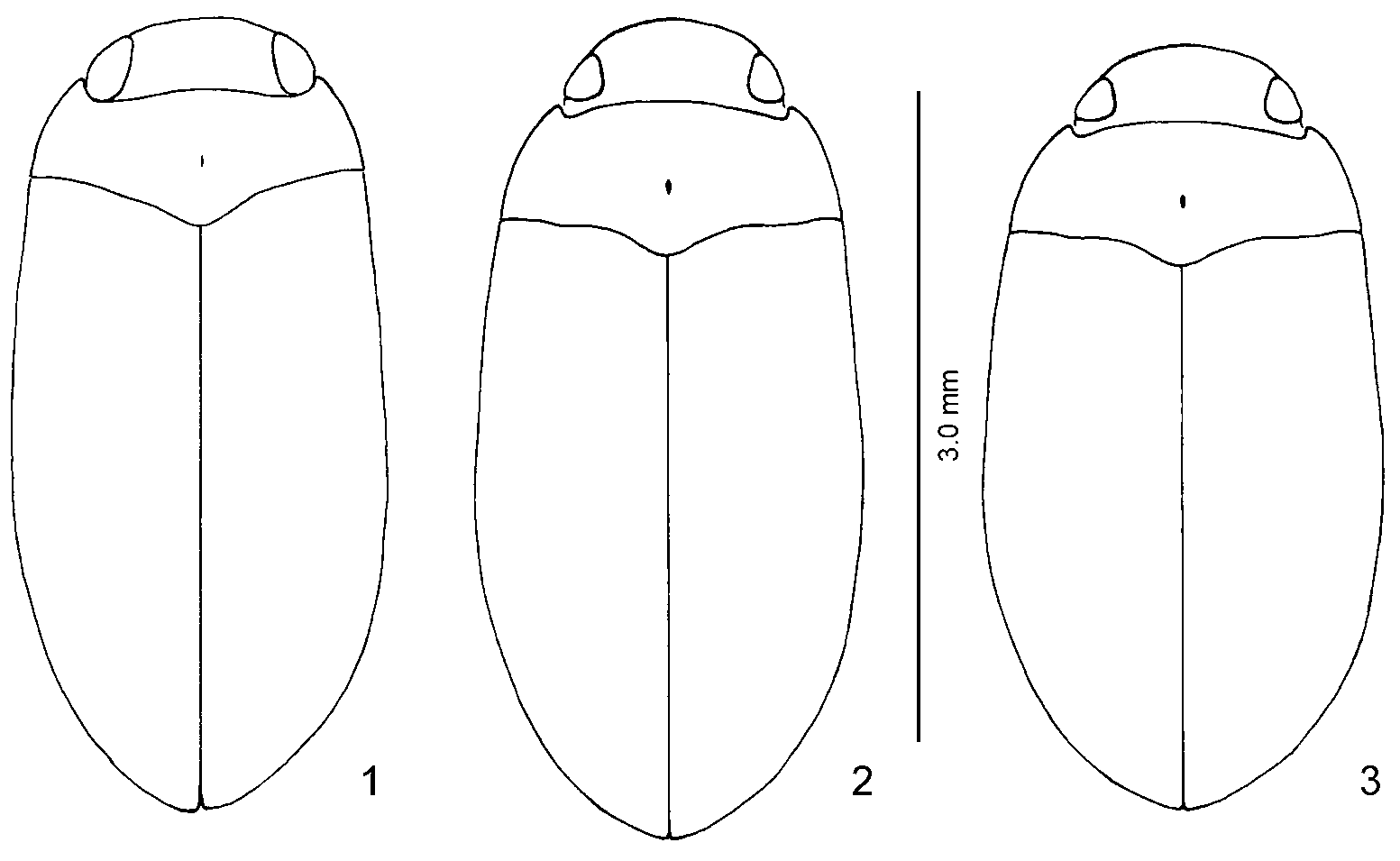 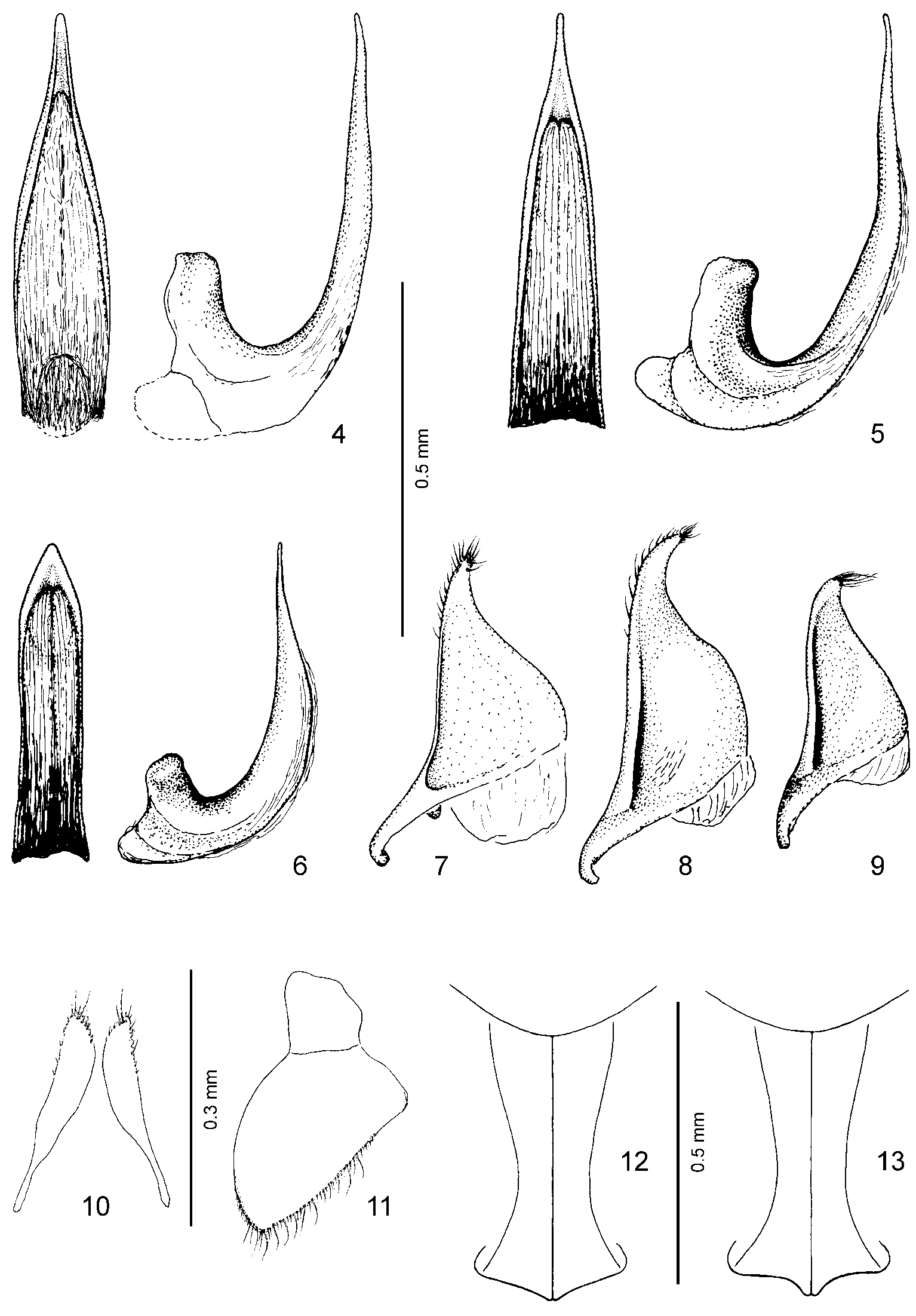