Glasby, Christopher J., 2003, A new species of Synelmis (Annelida, Polychaeta, Pilargidae) from New Zealand and designation of a neotype for S. albini from the Canary Islands, Zoosystema 25 (1), pp. 7-15: 9-12

DISTRIBUTION. — Known with certainty only from shallow subtidal rocky reefs of Tenerife and Fuerteventura, Canary Islands.

Langerhans’ type material originally housed in the Science Museum (Freiburg, Germany) was destroyed during the World War II according to Brito et al. (1996). They re-described Synelmis albini   based on five specimens from the Canary Islands; two were the specimens studied here from Tenerife, and the other three were specimens from Majanicho, Fuerteventura. The same five specimens were described earlier in the unpublished thesis of Jorge Núñez ( Núñez 1991), and in the same work the Majanicho specimens were identified as potential neotypes. Subsequently, the three Majanicho specimens were registered as “neotipos” with the Museo de Ciencias Naturales (Santa Cruz de Tenerife, Tenerife) (TFMC-AN/0178) (Brito et al. 1996). However, this must be regarded as an invalid neotype designation (irrespective of whether or not the thesis satisfies the ICZN as a valid publication) because among other reasons it was not accompanied by a statement identifying a particular specimen as the neotype and the specimens were not from near the original type locality, the rocky coast of Puerto de la Orotava, northern Tenerife (see Langerhans 1881: 95).

In order to rectify the situation, one of the two specimens described here from Playa de la Tejita, Tenerife, is here designated as the neotype, and a new registration number (TFMC- BMAN/000214) applied. The previous number (TFMC-AN/0178) has been cancelled (F. Hernández Martín pers. comm.). The neotype designated here is topotypic and is consistent with what is known about the former name-bearing type according to Langerhans (1881) and the descriptions of Núñez (1991) and Brito et al. (1996). The only discrepancies between Núñez (1991) and Brito et al. (1996) and the present description can be attributed to the larger body size (their largest specimen measured 20 mm in length, 0.5 mm wide and 110 chaetigers), and the slightly better condition of the Fuerteventura specimens. A pair of eyes is obvious in the Fuerteventura specimens, lateral antennae arise anterolaterally on the prostomium (the mid-lateral position on the present material is probably the result of distortion of the prostomium as a result of the eversion of the pharynx); notopodia have one or two notoaciculae whereas I observed only a single notoacicula.

An interesting feature recorded by Langerhans (1881: fig. 16d) for S. albini   , but not reported by other authors, is the presence of a ring or halo of fine hairs (= fimbriae), which are visible when the pharynx is everted. The fimbriae resemble those of certain hesionids. The fimbriae were not seen in the Tenerife specimens, probably because the degree of pharyngeal eversion was insufficient. However, fimbriae were observed in the new species of Synelmis   from New Zealand. The generality of the presence of pharyngeal fimbriae in Synelmis   (and other pilargids) is worthy of further investigation especially in regard to the phylogeny of the group. 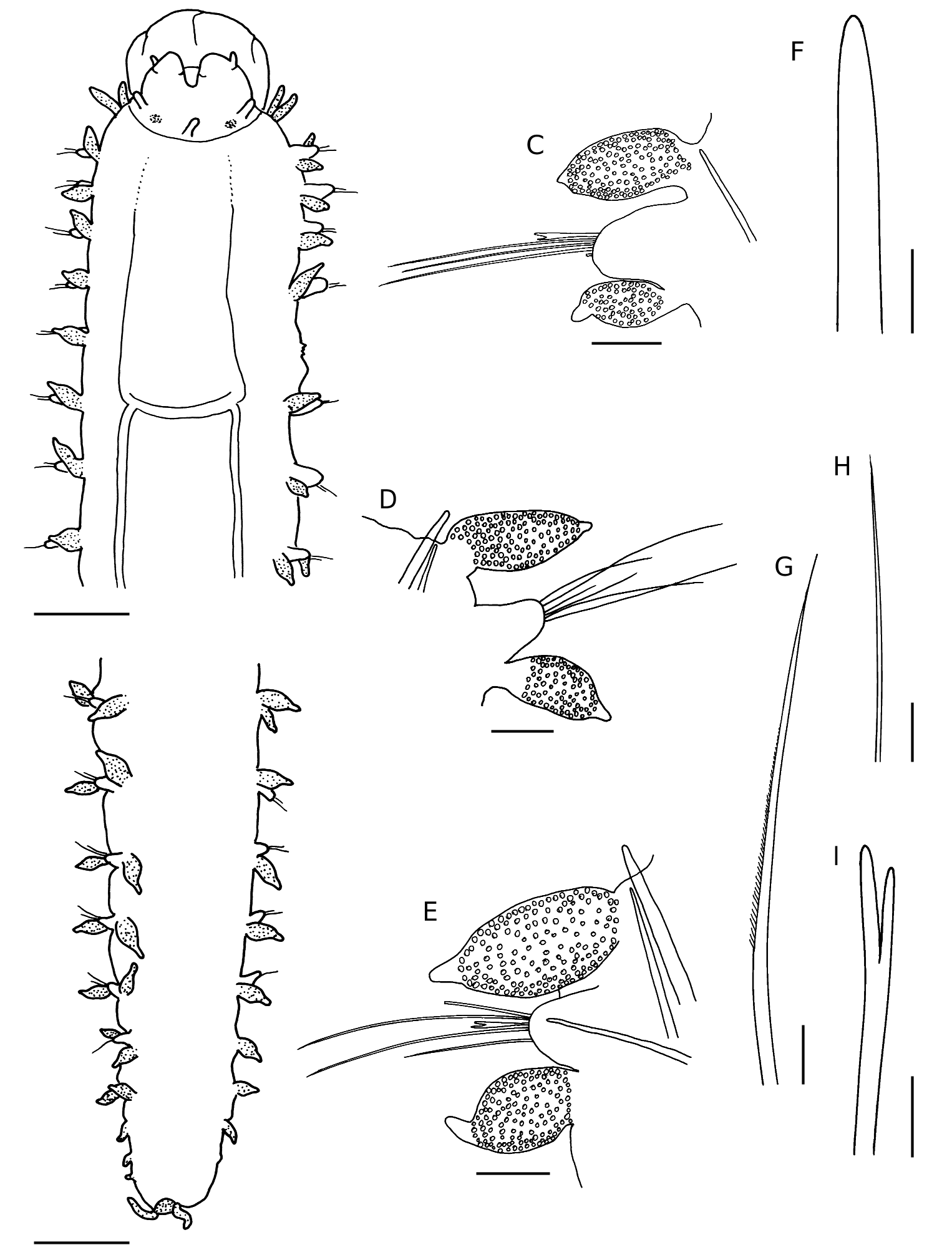