Colony ( Figure 1A View Figure 1 ) flabellate, loosely branched, sparsely reticulate; often large areas of open space between branches; on rare occasions, branches anastomose; irregular, pinnate branching chiefly in one plane. Appears moderately delicate; some distance from base, main stem generally divides into several main branches, center one ascending nearly unbranched, lateral ones at first widely divaricating, then ascending, giving forth pinnate branches which tend to be opposite, often irregular. Branchlets ~6.0 mm apart (where regular), somewhat flattened (0.5-1.0 mm); terminal branchlets usually end with two oppositely disposed polyps ( Figure 1B View Figure 1 ). Polyps form prominent, conical, volcano-shaped mounds, with broad base (not boxy), with distinct exsert anthocodiae; polyps scattered or biserial ( Figure 1B View Figure 1 ), in two irregular, lateral rows, creating a very narrow front and back; laterally, opposite or (often) alternate on branchlets; colony and branch profile appearing in form of zig-zag pattern. Polyps more numerous on front than behind; mound summits 2.0-4.0 mm apart on one lateral side, 0.6-1.0 mm high, surmounted by 0.4-1.0 mm tall anthocodiae, ~1.5 mm across. Margins with eight-lobed edge; outer sides of tentacles crowded with sclerites, tentacles retractile, bent inward at rest. Coenenchyme thin; outer layer filled with spinous rods, spindles, and capstans. Color of living colony typically true salmon, also bright orange to deep coral red; polyps may be same color (paler), cream or white; axis dark greenish-brown, lightening distally. Sclerites ( Figure 2 A–G View Figure 2 ) can be always exclusively small to somewhat long, warty (thorny), slender spindles, larger ones often curved. On shorter, thorny ones, some have very prominent, jagged teeth, projecting off one side (reminiscent of sclerites seen in some Muricea   ); also few small, elongated ones with median waists ("some as granules, some as foliate capstans," Nutting 1909). In current examinations, those that almost appeared as radiate nuggets could be the granular-appearing or foliate capstans mentioned by Nutting (1909). As well, some can resemble torches, and can be quite evident; these may be the shorter, thorny ones mentioned above. Mound surface sclerites lie transversely. Sclerites in tentacles described as stout, blunt rods; in all specimens examined (identified as this species), rods were sometimes rarely seen in very small numbers, but never obvious.

Named in honor of Professor CA Kofoid from the University of California.

None specifically indicated. Could appropriately be called the Orange ‘rick-rack’ gorgonian.

Found off California and Oregon coasts (refer to Appendix 3: List of material examined). Off California in locations between 175 and 218 m, off Oregon in 101-106 m, at 126 m and at 138 m. Speculative range from Upper Baja, California, to NE of Tanner Bank in the south ( USNM 59817), along southern California coast through Monterey Bay (Holotype, USNM 25432), to south of the Farallon Islands, California ( USNM 57235). May continue range northward, off the coast (NW) of Portland, Oregon ( USNM 53972), at least (as well, possibly USNM 49538 and USNM 56989, both from Heceta Bank, Oregon). Extreme range makes identification of some specimens questionable; possible range overlap with similar-looking species, S. pacifica   (Nutting, 1912). If following a slightly deeper, moderately cooler, water gradient in southerly locations, then a possibility. Appendix 2: Map A1 View Map A1 shows apparent range of this species in relation to those such as S. pacifica   and S. torreyi   (Nutting, 1909) that it might be confused with when viewed in situ.

Appears to be a moderate depth to deep-water species, generally deeper off California coast, slightly shallower in more northerly locales. Several lots of this species in SBMNH collection displayed associated organisms: on several, the attached organism looked like a clump of small bubbles, reminiscent of that which "spittle bugs" produce on branches of some land plants; at least some of these clumps were small anemones. Some specimens had species of hydroid attached; few colonies harbored tiny Ophiuroidea  .

Multiple labels associated with some specimens examined (some with as many as three different labels, each with a different genus/species name, as determined by three separate investigators), complicated identification. This called into question whether all of them were indeed S. kofoidi   , a different species in the genus Swiftia   or some other gorgonian (belonging to an entirely different genus); some specimens had been identified previously as belonging to the genus Psammogorgia   (sclerites did not support this).

Bayer made personal notations in his copy of Nutting (1909), indicating that this species was "stouter than torreyi, calyces closer, bars in anthocodiae large and stout. Similar to Callistephanus pacificus   Nutting, 1912: Pg. 96." This species is stouter than S. torreyi   (in the form of the polyps, and in total colony height), but polyps rarely as close together as those in S. torreyi   , nor were the large, stout bars that Bayer mentioned obvious; additionally, the color is completely different for these two. In other respects, specimens strongly match images for this species given by Nutting (1909). Bayer’s notation regarding similarity between it and Callistephanus pacificus   Nutting, 1912 is generally affirmed. Overall, most similar to Swiftia pacifica   , but S. kofoidi   is often more open and delicate; many colonies of S. pacifica   can be thicker-branched and bulky in overall appearance ( Figures 15 View Figure 15 , 21 View Figure 21 ). The bright orange color (salmon), overall delicate appearance, widely-spaced polyp mounds and very distinct, jagged/sharp zig-zag profile (due to predominantly alternate and lateral placement of prominent polyps) of this species set it apart from the other two species ( S. pacifica   or S. torreyi   ) that it is often compared with. As indicated in the WoRMS Database (Cordeiro et al. 2019), this species has accepted status.

The California Academy of Sciences ( CAS) has some thirty cataloged records (only some identified to species) from this genus in its collection. Eleven of them are from Alaska and are likely Swiftia pacifica   . Of the remaining, sixteen or so were identified as this species. Most of these however, were collected from northern California (Monterey Bay, Humboldt County, Sonoma County, Marin County; many likely the more northerly-dwelling S. pacifica   ). The Monterey Bay Aquarium Research Institute (MBARI) collection records indicated specimens of this species, collected and/or surveyed/photographed throughout their study areas (of those identified as this species, many may actually be S. pacifica   ). One colony examined via video/photo, was T1101-A21; based on colony shape and color, it appeared to be this species. Sclerite examination of the actual specimen could have confirmed it as such but specimen was not collected. Two other data collection events should be considered. However, neither of the specimens in question were located; they apparently are not housed at the National Museum of Natural History, Smithsonian (NMNH). Both from: North Pacific Ocean, USA, California, Monterey County: [Monterey Bay], bearing S 46°E, 8.4 miles off Point Piños light-house and S 76°E, 3 miles off Point Piños light-house, at 1,544 m and 109 m, respectively. Both collected by USBCF ‘Albatross’, at stations 4546 and 4554, respectively. 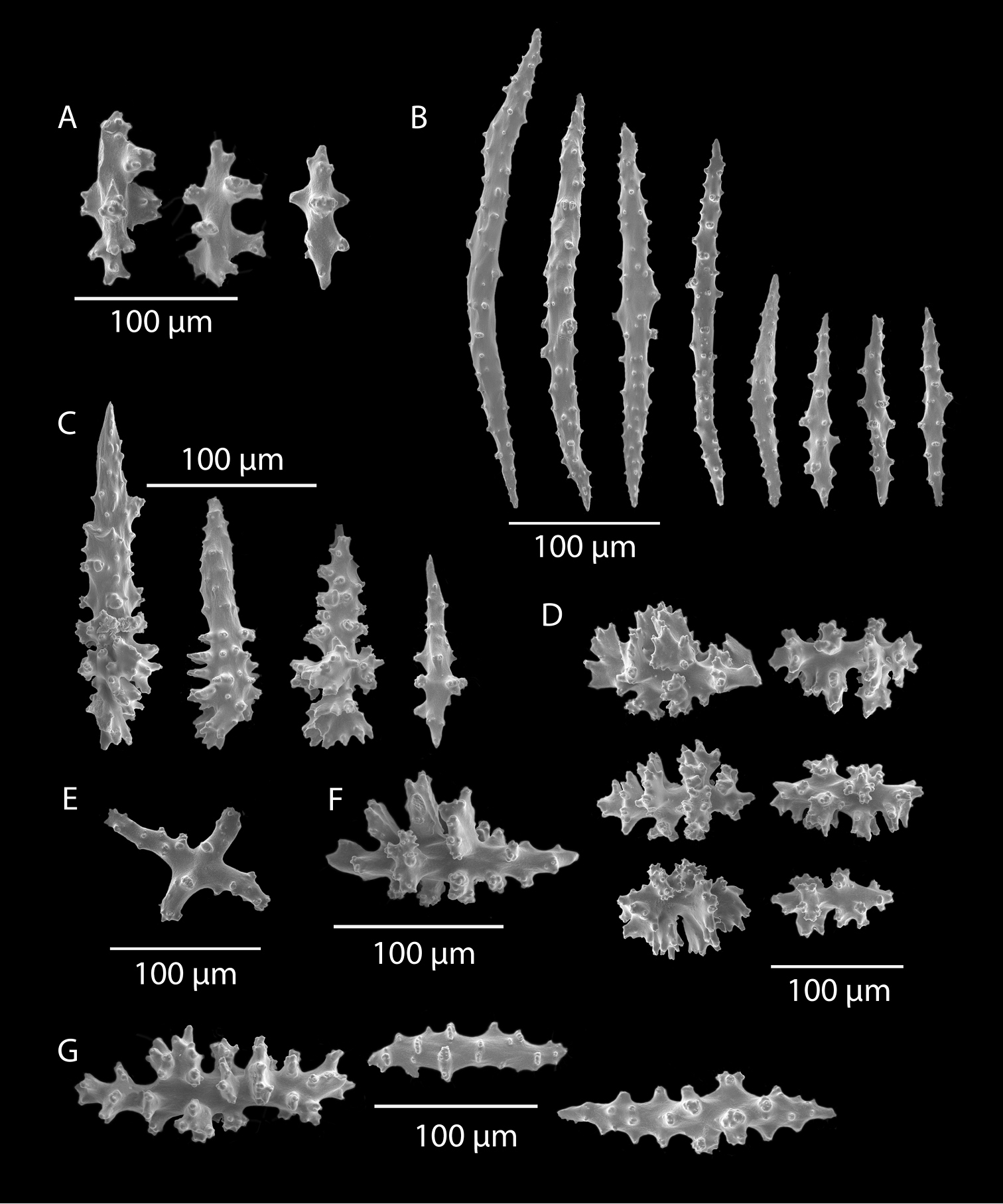 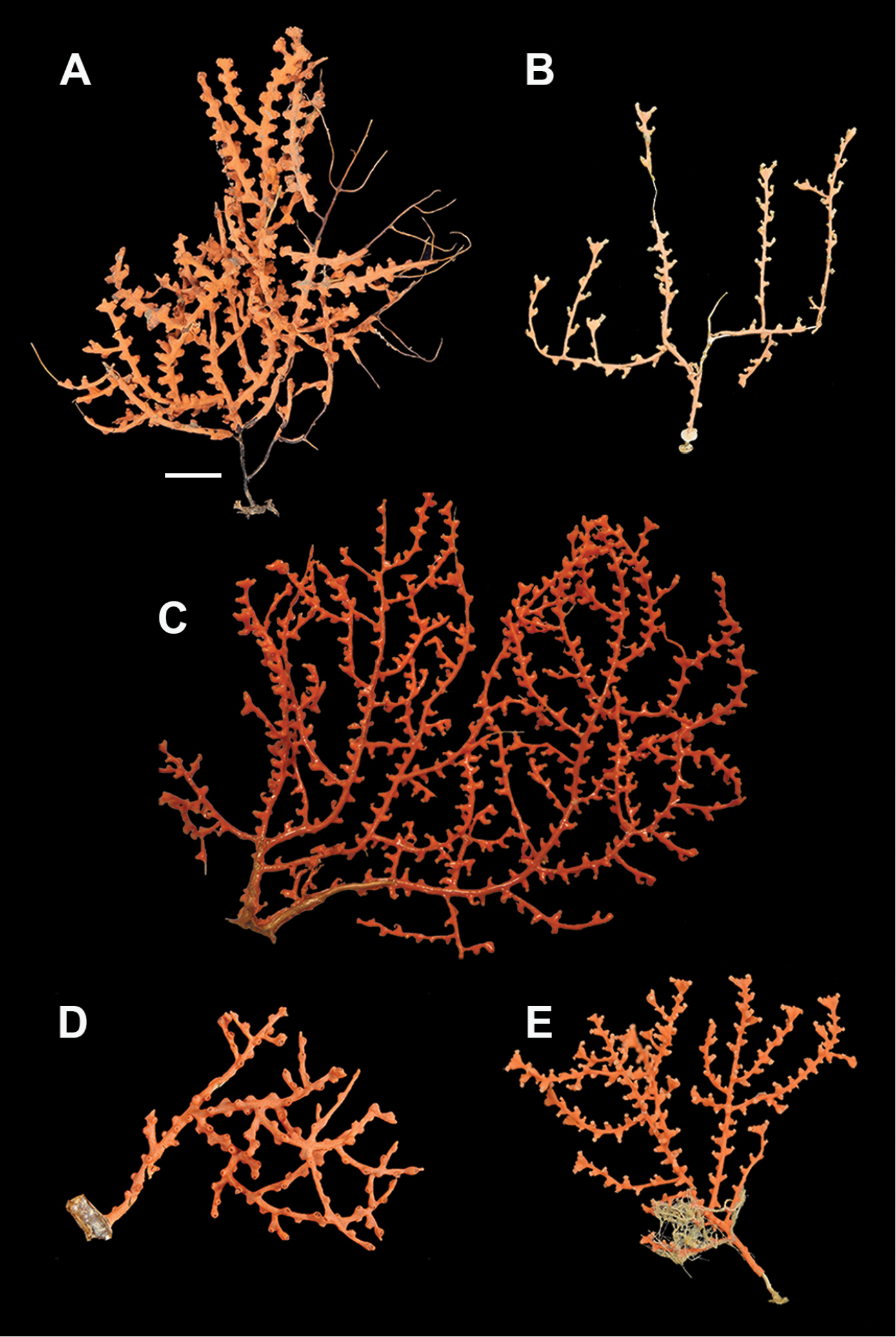 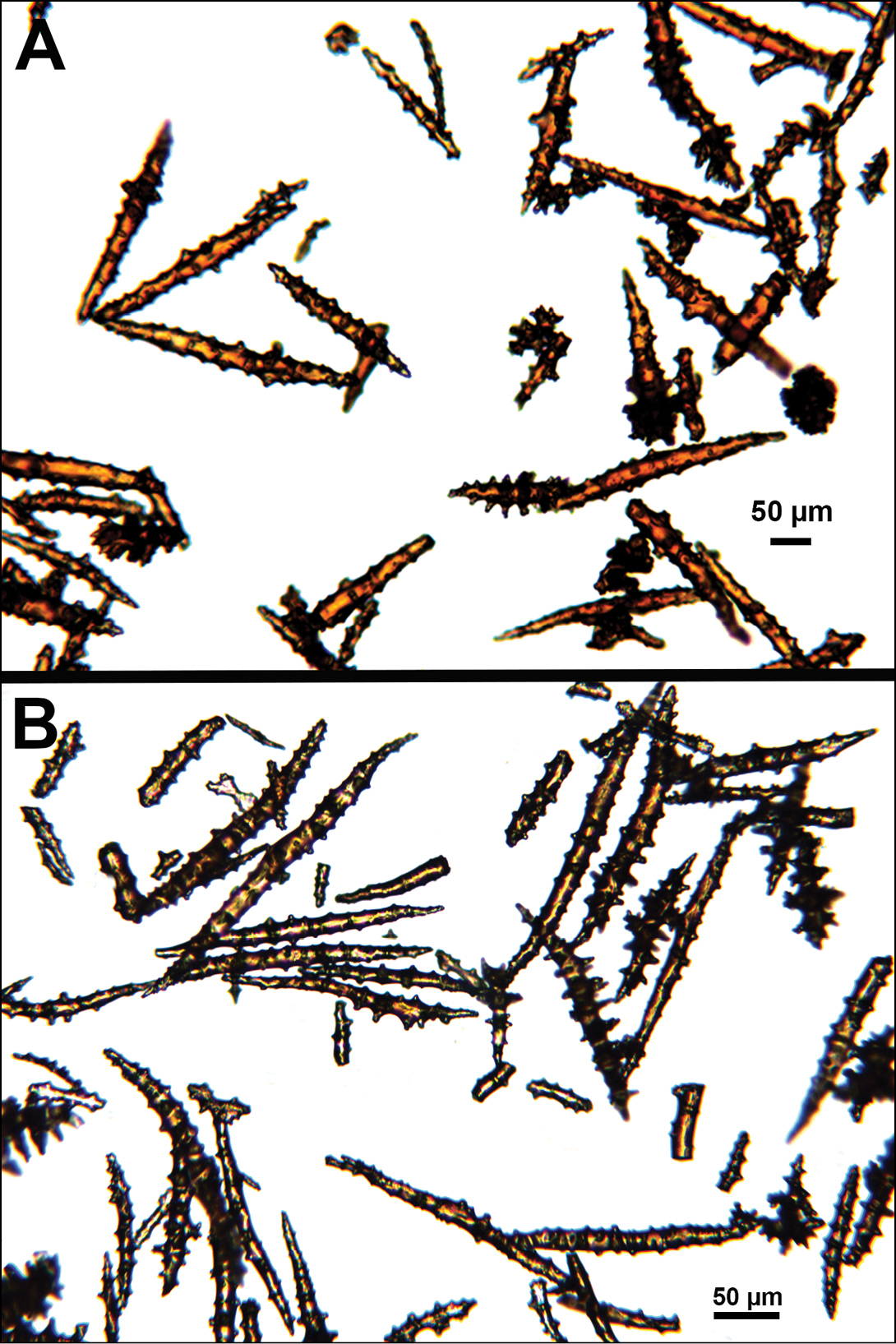 Figure 16. Common sclerite forms seen in colonies collected from the southern end of the geographic continuum, using standard light microscopy. A Sclerites taken from SBMNH 422965 B Sclerites from SBMNH 232036. 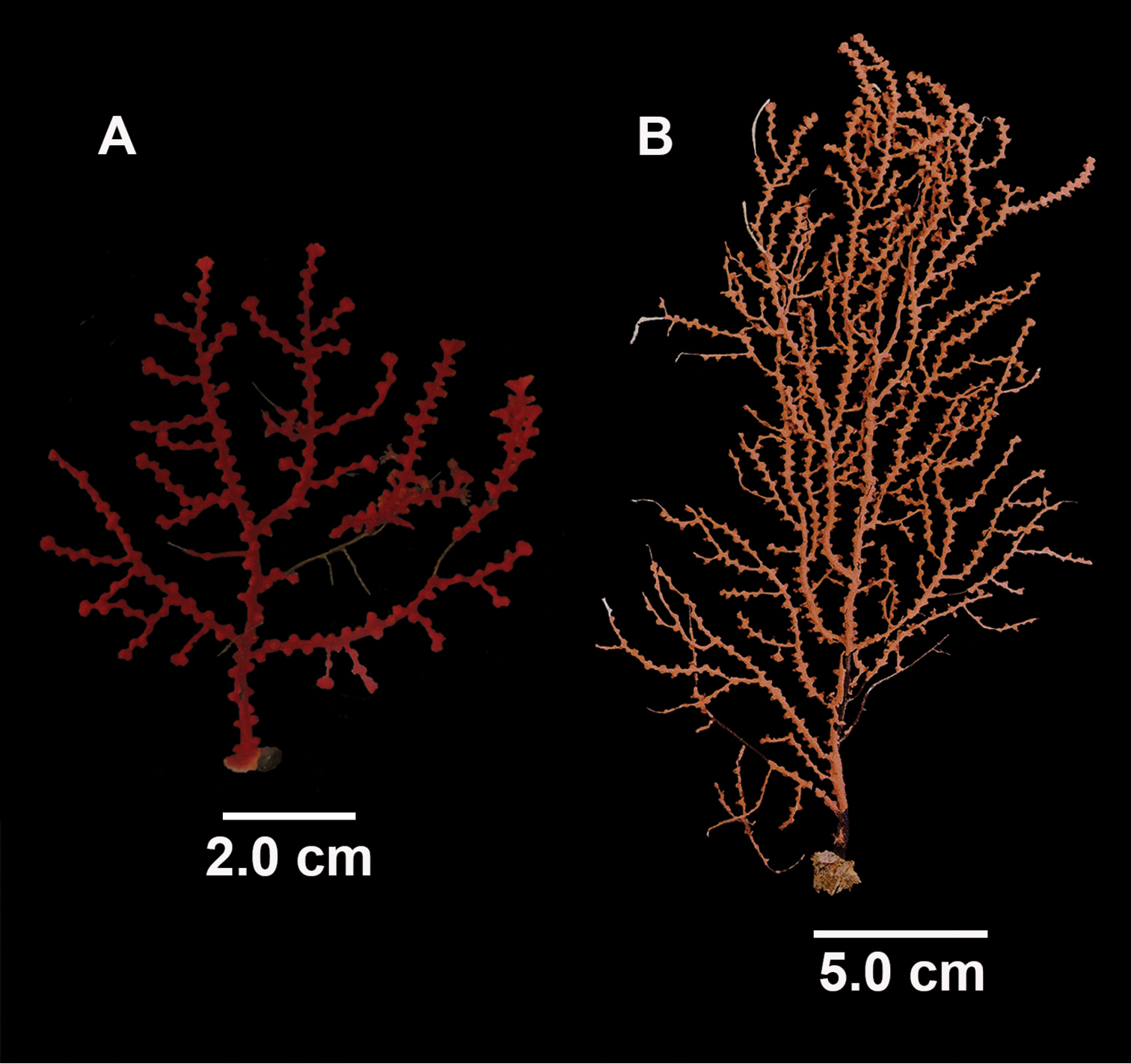 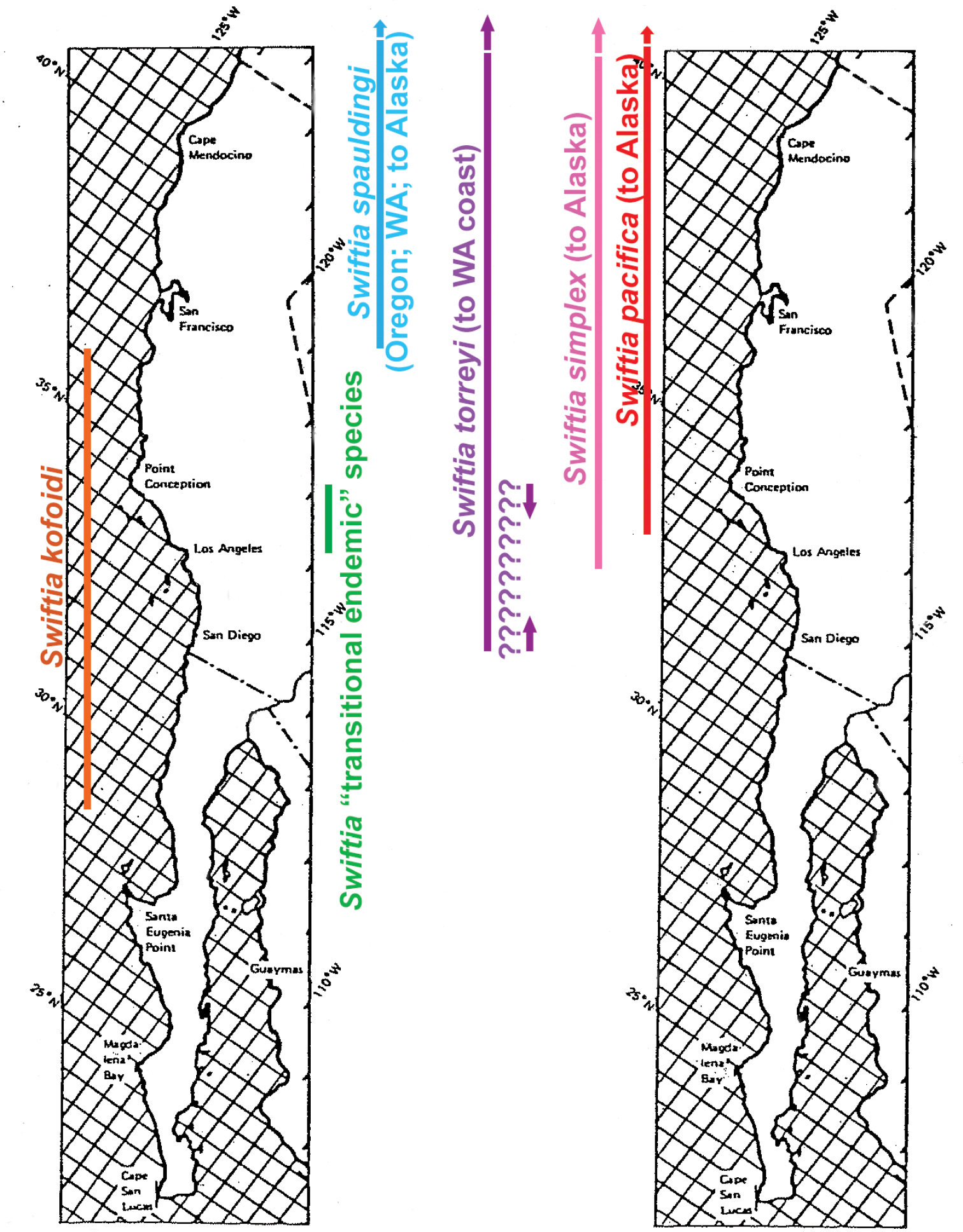 Map A 1. Distribution of species in genus Swiftia seen in, or immediately adjacent to, the California Bight. Range extensions are not definitive, but illustrative of the geographic distribution of specimens housed in SBMNH collection.