Diagnosis: A Dunkleosteus species   possessing transverse articular facets on the prehypophysial region of the parasphenoid, retention of fine punctate tubercles for dermal plate ornamentation, and an anterior position of the anterior triple point (PrO/PtO/C plate junction) over the orbit.

Etymology: Named after the collector, Clarence Raver of Wakeman, Ohio.

Occurrence and stratigraphy: Recovered from a shale pit south-west of the intersection of Route 2 and Rye Beach Road, and between Sawmill Creek and Rye Beach Road, Huron Township, Erie County, Ohio ( Fig. 2A View Figure 2 ). The shale pit has subsequently been covered by commercial development; however, laterally equivalent sediments are exposed in Sawmill Creek. Collected from the basal 1.5–3 m of the Huron Shale Member ( Fig. 2B View Figure 2 ), Ohio Shale Formation (Famennian, Over & Rhodes, 2000), which rests upon on the Middle Devonian Prout Limestone ( Hoover, 1960). Found within a large carbonate concretion typical of the Huron Shale. Dunkleosteus raveri   sp. nov. is further distinguished from the only other Dunkleosteus species   within the Ohio Shale Formation ( Du. terrelli   ) by its lower and non-overlapping stratigraphic position.

The skull roof ( Fig. 3 View Figure 3 ), in terms of individual plate shape and sensory line pattern, is comparable with that of Du. terrelli   ; however, it is preserved only incompletely, with portions of ten dermal plates present (parts of five paired and three median plates). The internasal, postnasal, postmarginal, gnathals, and cheek plates are not preserved. The plates are covered by a fine punctate tuberculation. The sensory line grooves follow a typical arthrodiran pattern ( Heintz, 1932, figs 42, 43). Internally, the skull roof is reinforced by lateral thickening (an occipital thicken- ing is not preserved, with only a small portion of the nuchal thickening remaining, th.n; Fig. 4A View Figure 4 ).

The preparation of the external surface is incomplete in some areas, and in other areas the removal of matrix has resulted in the loss of the most superficial layers. Additionally, many fractures are present as a result of the expansion of calcitic matrix during concretion growth. These diagenetic and preparatory features result in a loss of information concerning the visibility of plate boundaries. The contact surfaces between adjacent plates are denoted as either a contact face on the visceral surface or an overlap area on the external surface (after Dennis & Miles, 1979a).

The pineal plate (P; Fig. 3A View Figure 3 ) is narrow, being over three times longer than wide (length/width of exposed plate is ~3.3). The pineal plate is overlapped by the adjacent rostral, preorbital, and central plates, thereby separating the preorbital plates posteriorly. Internally, a pronounced ridge (r; Fig. 4A View Figure 4 ) posteriorly bounds the internal pineal fossa.

The central plate (C; Fig. 3A, B View Figure 3 ) outline is difficult to discern. Anteriorly, the outline of the plate is transverse, with the preorbital plate forming a shallow embayment. Laterally, the postorbital plate forms an embayment, although it appears to be shallow on the left and more deeply notched on the right. Anteriorly, the central plates are separated by the pineal plate for ~40% of their midline length. The posterior margin is incomplete. The supraorbital and central sensory line grooves cross the central plate, with both grooves ending at the level of the ossification centre. A contact between the central and the marginal plates is visible, although the total length of the contact is not clear. Internally, the pre-endolymphatic thickening (th.pre; Fig. 4A View Figure 4 ) extends from the lateral consolidated arch to the nuchal thickening (th.n; Fig. 4A View Figure 4 ), and shows a central depression. The preendolymphatic thickening forms a distinct anteromedial boundary for the parabranchial chamber (f.pb; Fig. 4A View Figure 4 ; cucullaris depression of Stensiö, 1963; refer to Carr, Johanson & Ritchie, 2009, for a discussion of the terminology applied to this region). A radiating pattern is present on the internal thin portion of the central plate (the ‘ossification rays’ of Heintz, 1932: 135).

The paranuchal plate (PNu; Fig. 3A, B View Figure 3 ), incomplete, is crossed by the continuation of the main lateral line groove. The marginal plate seems to form an embayment of the paranuchal plate in the area of the main lateral line, thereby forming a broad posterolateral process that overlaps the postmarginal plate. A descending face along this process forms part of the subobstantic area (soa; Fig. 3B View Figure 3 ; see also Dennis- Bryan, 1987: soa, fig. 5). The transverse occipital thickening and articulations with the thoracic armour are not preserved.

The ornamentation of the skull roof consists of a fine, evenly spaced ornament of punctate tubercles ( Fig. 5 View Figure 5 ). D. Goujet (pers. comm.) suggests caution in using the presence or absence of ornamentation as a phylogenetic character. This is based on the presence of both ornamented and unornamented forms of Plourdosteus trautscholdii ( Eastman, 1897)   within the same locality. However, a review of all of the specimens of Dunkleosteus   from the Cleveland Shale Formation curated at the Cleveland Museum of Natural History supports the presence of distinct stratigraphic distributions of ornamented and unornamented Dunkleosteus species. 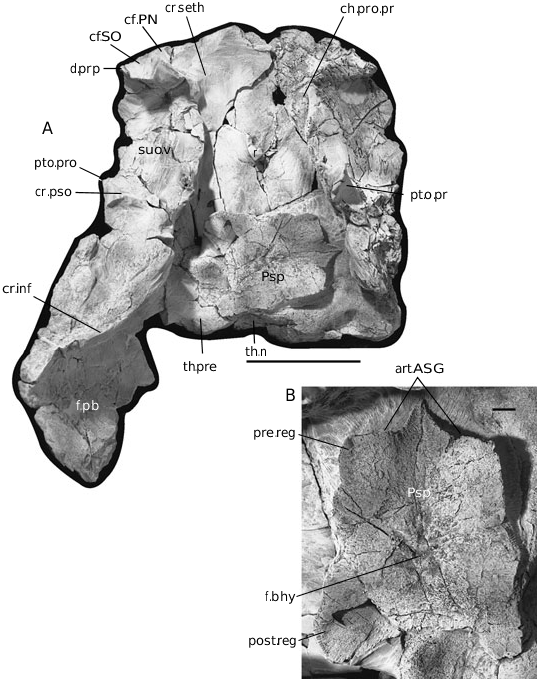