The Aspinothoracidi (node 8; Fig. 9 View Figure 9 ) are characterized by: (1) the development of a concave posterior nuchal border (character 11, state 2), associated with an enlarged nuchal gap; (2) the enlargement of the orbits, with a shift of the anterior triple point (PrO/ PtO/C plate junction) to a position over the orbit (character 28, state 2; character 33, state 1), and posterior rotation of the postorbital branch of the infraorbital sensory line, thereby closing the angle between this sensory line groove and that of the otic branch of the infraorbital sensory line (character 75, state 2); (3) the loss or reduction of the dermal postorbital process (character 34, state 0); (4) the loss of the spinal plate (character 45, state 0); (5) the loss of dermal ornament (character 91, state 0); (6) the reduction of the lateral consolidated arch and transverse occipital thickening on the internal surface of the skull roof; (7) the reduction of the nuchal pits and a rotation of these pits to open posteriorly; and (8) the separation of the nuchal pits by a median septum that is continuous with the posterior process of the nuchal plate (character 97, state 1, ambiguous because of missing data). The families sharing the loss of the spinal plate include the Leiosteidae   , Trematosteidae   , Selenosteidae   , Titanichthyidae   , Bungartiidae   , Leptosteidae   , and possibly Brachydeiridae   , Mylostomatidae   (clearly absent in Tafilalichthys   , one member of the Mylostomatidae   in which this region is well preserved), and Dinichthyidae   (missing data). In the current analysis only Di. herzeri   , Ha. rapax, He.   gouldii   , Gor. clarki   , Gy. hydei   , and Rhinosteus parvulus Jaekel, 1911   are considered as potential members of the Aspinothoracidi.

We do not attempt to evaluate critically the relationships among the Aspinothoracidi; although, the present results raise some questions concerning either the relationships of the Selenosteidae   or their monophyly, as suggested by several authors ( Denison, 1978; Lelièvre et al., 1987; Carr, 1994, 1996). As noted by Carr (1994, 1996), a new analysis of the European taxa together with work presently in progress on poorly known or undescribed material from the Cleveland Shale is fundamental before a systematic revision of the Selenosteidae   and related members in the Aspinothoracidi. However, an expressed goal of this study is achieved in demonstrating that Hadrosteus   and Dinichthys   are members of the Aspinothoracidi, and clearly distinct from the Dunkleosteidae   . 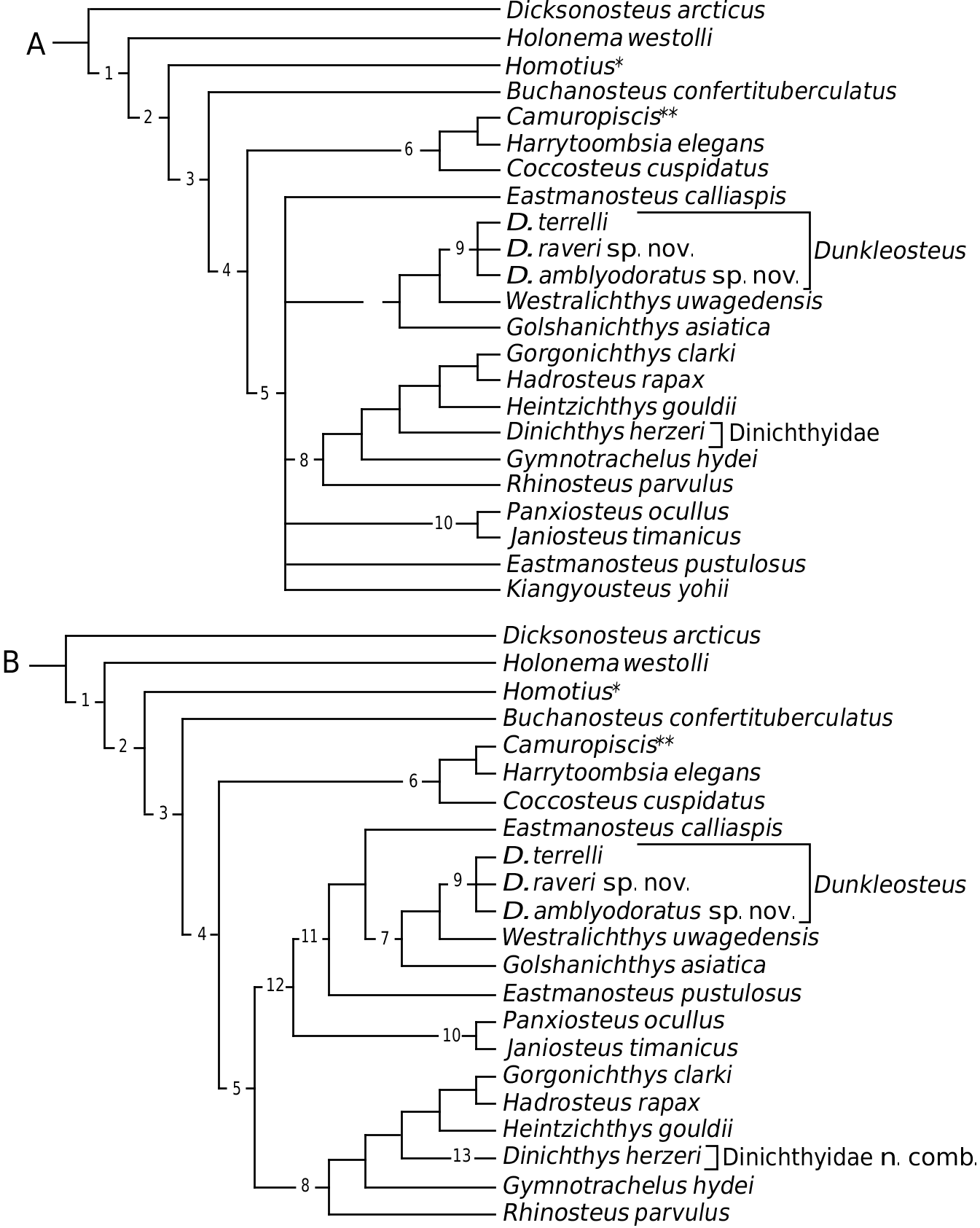