Rehderodendron macrophyllum   is known only from Hekou County, Yunnan Province, where three localities of the species (Binglangzhai, Tianweizhai and Shaba) have been documented since 1953. It was recorded as growing in evergreen broad-leaved forests along damp valleys and hillsides at 120-250 m elevation. The original habitat of R. macrophyllum   is severely disturbed by forestry activities. Rehderodendron macrophyllum   (as Parastyrax macrophyllus   ) was listed as Critically Endangered by the Chinese government in 2013 ( Ministry of Environmental Protection and Chinese Academy of Sciences 2013; Qin et al. 2017). In 2020, we investigated its population, finding only three trees on the hill around Binglangzhai Reservoir, now a protected area. Rehderodendron macrophyllum   is still seriously threatened and research on the conservation biology of this species is urgently needed. The species flowers from November through January; the mature fruiting time is not known.

From the time of its original description until the present work, Parastyrax macrophyllus   had been consistently placed in Parastyrax   , including in Flora Yunnanica, Flora Reipublicae Popularis Sinicae and Flora of China ( Ming 1983; Hwang 1987; Hwang and Grimes 1996). In the original description, Wu and Feng (in Wu and Li 1965) indicated that its inflorescence is very short and its fruit is drupaceous with a fleshy “exocarp” (likely the mesocarp instead), which would be consistent with the characters of Parastyrax   . We re-examined the original material, including the paratype collection Cai Ke-Hua 533 (KUN [acc. # KUN0026239!]), which possesses the only fruit gathered of the material cited in the protologue ( Wu and Li 1965). We found that the fruit of this collection is clearly immature, so its internal structure, which would otherwise help to confirm the placement of the species to genus, could not be determined. In March 2020, we conducted fieldwork in Binglangzhai, the type locality of P. macrophyllus   . There, we discovered plants that possess the same vegetative features as those in the type material of the species, yet with fruit in which the endocarp has many irregular rays intruding into the mesocarp, as in Rehderodendron   (Figs 4D, E View Figure 4 ) and unlike in P. lacei   (W.W.Sm.) W.W.Sm., the type species of Parastyrax   . On this basis, we conclude that P. macrophyllus   is best placed in Rehderodendron   . Parastyrax   must be redefined on characters that exclude those of R. macrophyllum   ; we include diagnostic characters for this purpose in Table 1, based on several previous studies ( Smith 1920; Dickison 1993; Hwang and Grimes 1996; Fritsch et al. 2001).

Rehderodendron macrophyllum   is most similar to R. truongsonense   P.W.Fritsch, W.B.Liao & W.Y.Zhao (Fig. 3B View Figure 3 ), a species distributed in northern and central Vietnam ( Zhao et al. 2019). These two species share such features as evergreen tree; inflorescences axillary, congested and densely stellate-pubescent; bracteoles foliaceous, elliptic or obovate; filaments connate at base; and style pubescent. However, R. macrophyllum   can be easily distinguished from R. truongsonense   by larger leaf blades 12-27 × 6-12(-15) cm (vs. 6-13 × 4-7 cm), with a greater number of lateral veins on each side (8-14 vs. 4-7). 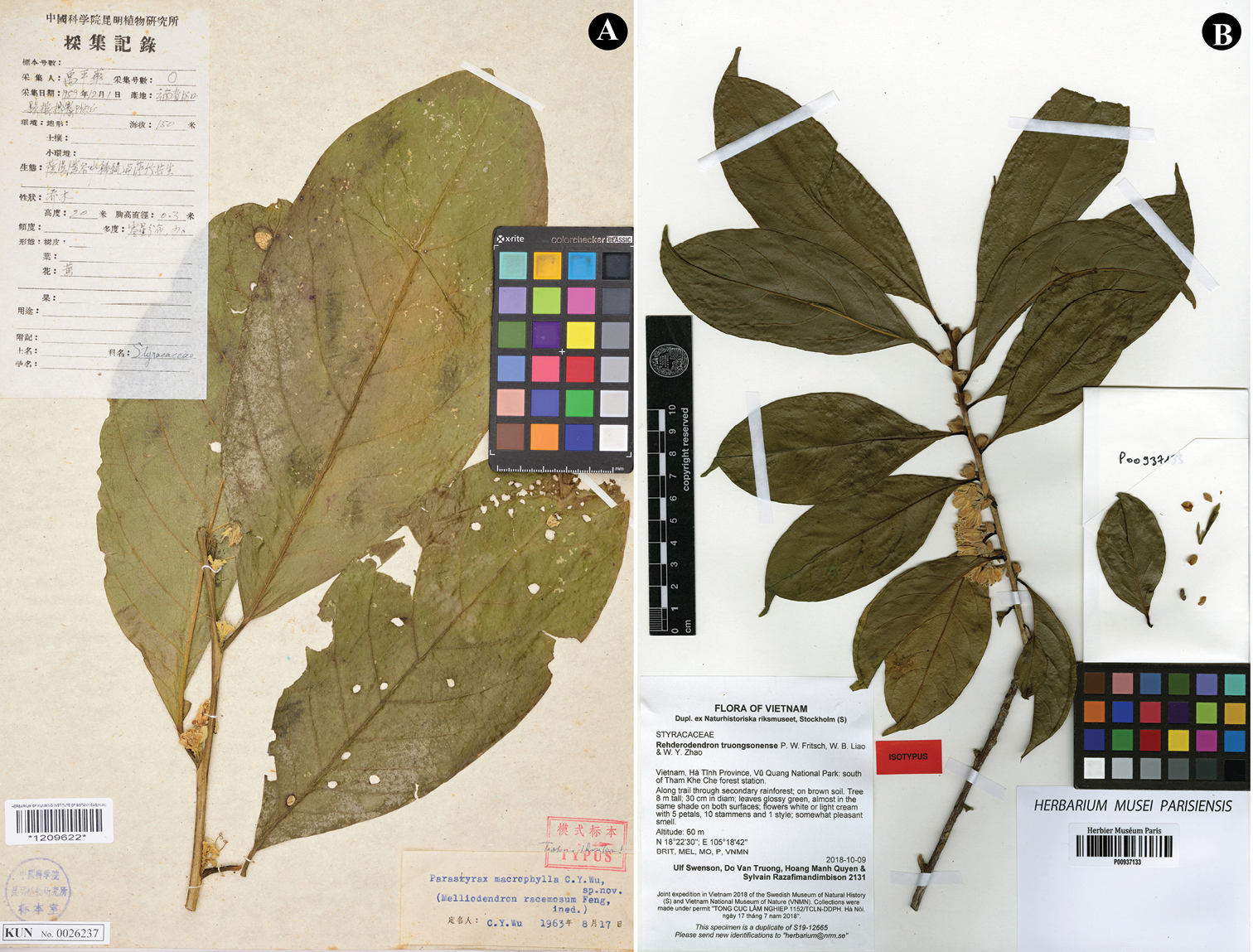 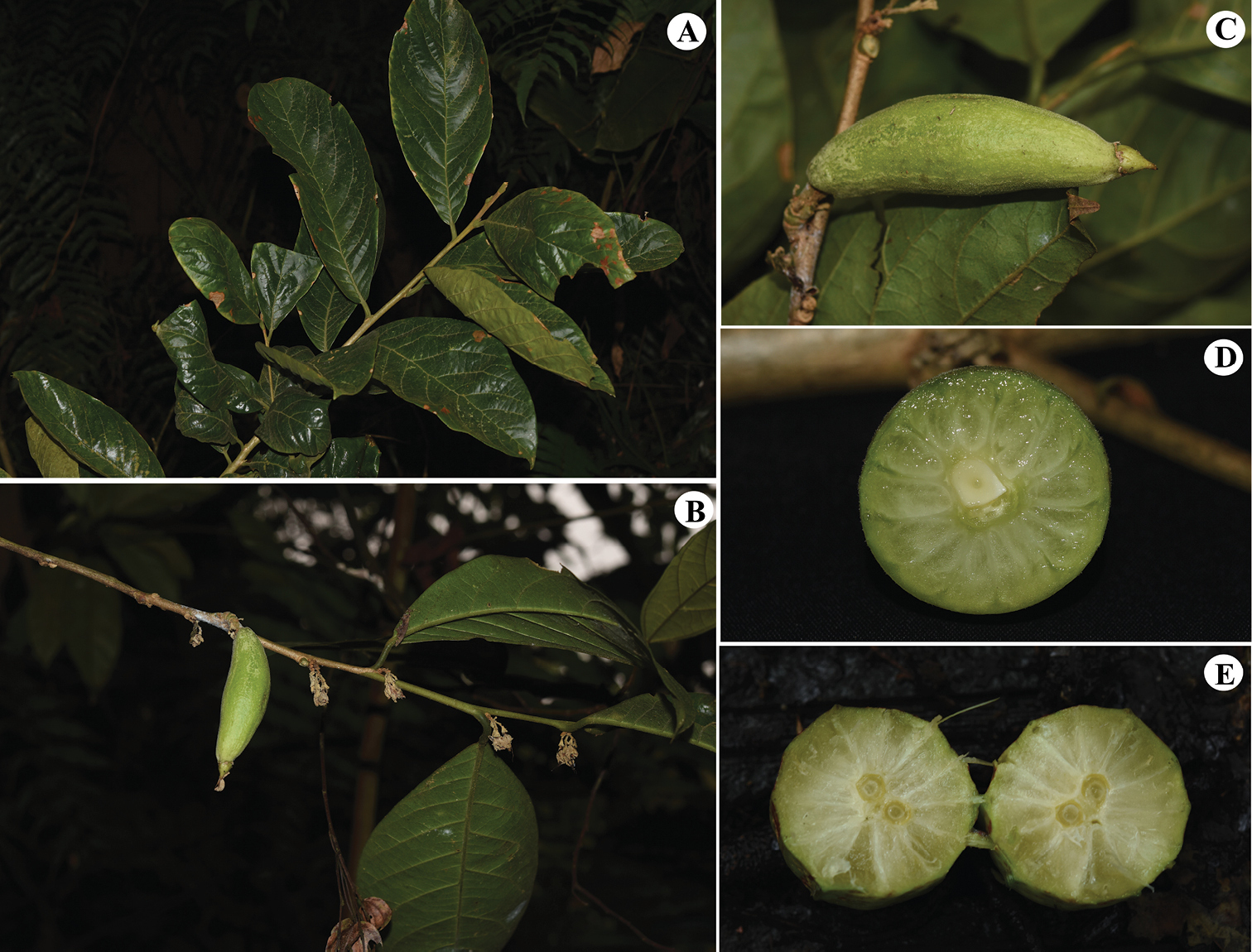