Remarks: Species of Hyalorisia  are similar to other limpet-like capulids in their shell shape and in the presence of an extension of the oral area, the pseudoproboscis; they are diagnosed by the shell, which is thin, depressed and regular in shape (from rounded to ovoid), and shows a glossy lamella inside the posterior part of the aperture.

Based on the original description and drawings, and on photographic examination of a syntype ( NHMUK 1904.6.15.136), C. fragilis  may indeed belong to Hyalorisia  : the shell is limpet-like, thin, ovoid, depressed, with the internal lamella (internal septum of Smith, 1904: 2) still present in the NHMUK syntype ( Fig. 8HView Figure 8). We had no material available for molecular systematic analysis from that part of the Indian Ocean that could be referred to as C. fragilis  and we were, therefore, unable to assign this name to any of the unnamed MOTUs in our dataset. Incidentally, we note that the name Capulus fragilis E. A. Smith, 1904  is a junior homonym of Capulus fragilis Meek & Hayden, 1856  from the Cretaceous of South Dakota. The allocation of C. fallax  to Hyalorisia  is more doubtful due to the apparent absence of lamella and to the shape of the aperture, which is flat in the posterior part and thus more similar to that of Capulus  or hipponicids. However, C. fallax  also shows similarities with Hyalorisia  , such as a slightly pointed anterior part of the aperture and the presence of a dorsal shell ridge ( Fig. 8JView Figure 8). Finally, C. (Hyalorisia) nettlesi  , showing the general features of the genus (ellipsoidal shell with an internal lamella; Fig. 8View Figure 8 K–N), may be the only known fossil of the genus. However, it is larger in size, compared with all the 11 extant species, and with the dorsal margin projected further than the apex ( Fig. 8MView Figure 8); this may suggest that either C. (Hyalorisia) nettlesi  was living on a different host or that it did not belong to the same Hyalorisia  lineage as the extant species.

Because of the presence of a pseudoproboscis similar to that of Capulus  , it has been suggested that Hyalorisia galea  is a kleptoparasitic filter feeder ( Bouchet & Warén, 1993). Prior to the present study, almost nothing was known about the hosts of Hyalorisia  . The only data consist of records of H. tosaensis  attached to the auger shell Terebra pretiosa Reeve, 1842  ( Otuka, 1939) and to the scallop Propeamussium sibogai  ( Otuka, 1939, as Propeamussium  sp.; Matsukuma, 1978), and a photo of H. galea  attached to a living Propeamussium  sp. ( García, 2012: fig. 4). Otuka’s record parallels what is known for C. ungaricus  , that is that it may also live in association with burrowing gastropods, such as Turritella communis (Thorson, 1965)  . However, it should be noted that while Turritella communis  as a ciliary or suspension feeder ( Yonge, 1946; Fretter & Graham, 1962) has a feeding strategy consistent with the hypothesized kleptoparasitic behaviour of the associated capulids, Terebra pretiosa  as a predator (carnivore) certainly does not. It is in fact not clear whether Otuka actually examined the specimen of H. tosaensis  reported to have been found by Torao Yamamoto, and we are inclined to believe that it was a hipponicid rather than a Hyalorisia  . As previously reported by Matsukuma (1978), we found that Hyalorisia  specimens are found (alone or in pairs) on propeamussiid scallops on the anterodorsal part of the left valve and close to the edge of this valve. Hyalorisia  attachment generally produces a small semilunar notch on the valve edge (i.e. caused by the insertion of the pseudoproboscis) and a scar on the shell on the site of attachment ( Fig. 9View Figure 9). These traces are very similar to those left by C. ungaricus  on its hosts (e.g. Fassio et al., 2015: fig. 1). 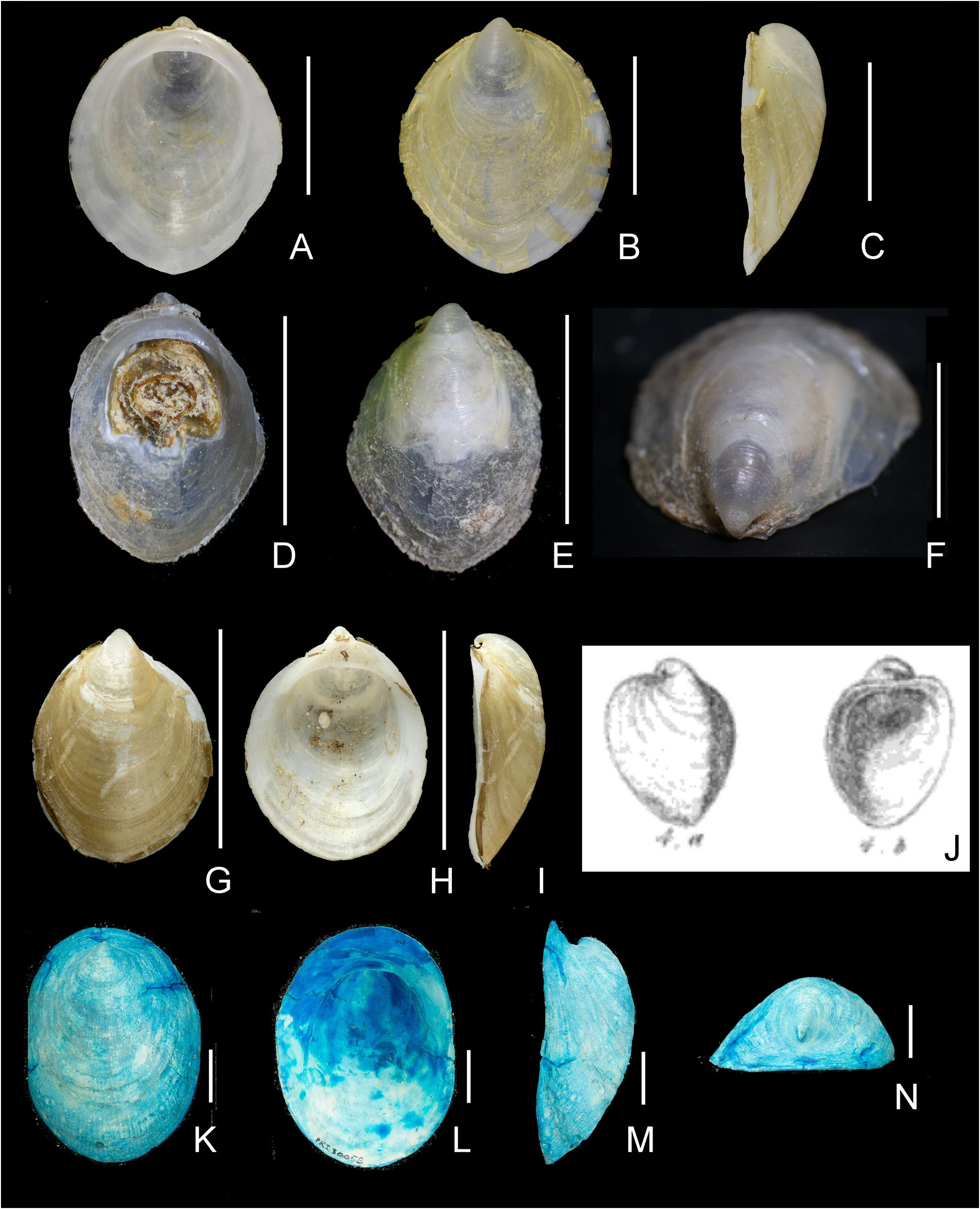 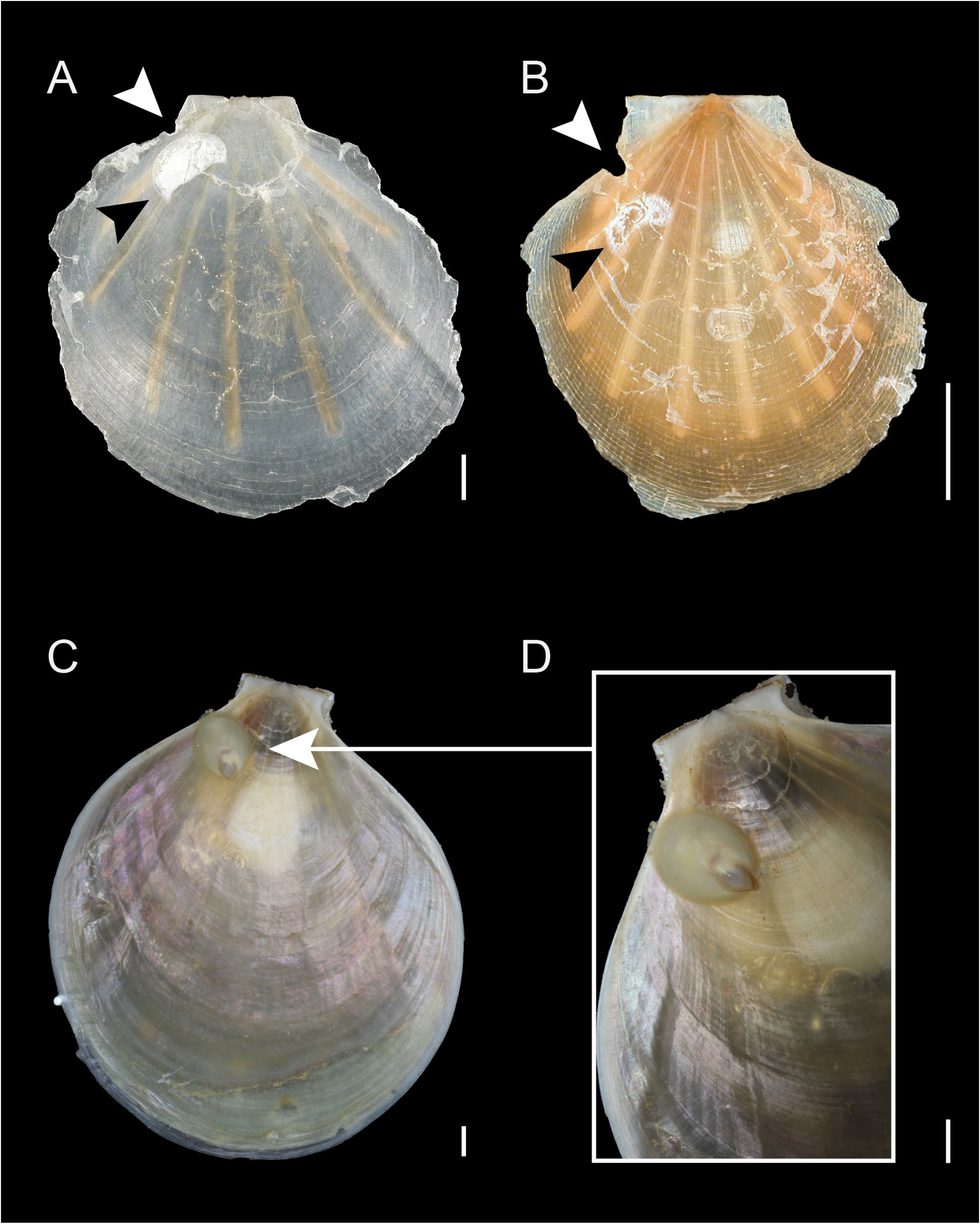