Derivation of the name. The species is named after Dr. G.F. Mazepova () from the Limnological Institute of the Siberian Branch of the Russian Academy of Sciences, who initially identified this species as Tonnacypris cf. glacialis . This is in recognition of her contributions to ostracod taxonomy in Lakes Baikal and Hövsgöl.

Diagnosis. Moderately large species (females about 1.6–2.3 mm). In lateral view slightly higher than half length, anterior and posterior margins broadly rounded. Calcified part of the inner lamella anteriorly narrow, and only slightly narrower posteriorly compared to anteriorly. Inner lamella of the left valve with one anteroventral peg associated with a reduced inner list, posteroventral peg sometimes inconspicuous. A 2 with reduced natatory setae, with tips just reaching the terminal segment. Mx 1 with tooth bristles on the third endite serrated. Terminal segment of the right clasping palp of the male (T 1) with a neck-like marginal indentation near the proximal end.

Description of male. Valves in lateral view ( Fig. 14 View FIGURE 14 A, B) slightly higher than half the length, with greatest height situated at about two-fifth of the length, dorsal margin slightly curving there; dorsal margin almost straight and sloping between this highest point and the rounded, inconspicuous posterodorsal angle in LV; posterior margin widely rounded and evenly progressing towards ventral margin; ventral margin slightly concave; valves in inner view ( Fig. 14 View FIGURE 14 A, B) with calcareous part of the inner lamella anteriorly less than twice as broad as posteriorly, posteroventral about same wide as posteriorly, ventrally only progressively narrowing around indentation; ventral part of the calcified inner lamella with one anterior and one, sometimes inconspicuous, posterior peg.

Wouters organ not seen on A 1. Rome organ small. Terminal segment with two long setae, one short claw, and one smaller, slender Y-aesthetasc.

Mx 1 with seven (5 + 2) setae on the first segment of the palp; terminal segment of this palp spatulate; tooth bristles of third endite serrated; sideways-directed bristles serrated.

CR ( Fig. 15 View FIGURE 15 F) with proximal seta slightly hirsute, proximally slightly enforced, two distal claws, distal setae about three-fourth the length of the proximal setae; distal half of the posterior side of the ramus set with about 6 or 7 groups of setulae in single rows.

Additional description of female. Valves in lateral view ( Fig. 14 View FIGURE 14 C,D) as in the male, but larger in all dimensions; posterodorsal angle slightly more rounded than in male; carapace in dorsal view ( Fig. 14 View FIGURE 14 I) subovate and slightly pointed at both sides; surface of the valves covered with polygonal pattern of superficial grooves, most obvious along the dorsal side; radial and false pore canals straight, similar to Tonnacypris tonnensis ( Fig. 10 View FIGURE 10 B); valves in inner view as in the male, but ventral indentation less pronounced and posteroventral calcified part of the inner lamella more narrow in the LV; colour: whitish.

A 2 ( Fig. 16 View FIGURE 16 B) with z-setae shorter than terminal claws, and unequal in length; G 2 -claw reduced, about 1.6 times the length of the terminal segment.

Remarks. Mazepova (2006) gives a range of 1.63–2.30 mm for the length of the female carapace and 1.55–1.97 for the male carapace. Apparently, the species seems to grow significantly larger in deeper water. This could not be checked from our material, as only shallow sites were sampled.

Ecology. Mazepova (2006) reported this species from shallow littoral zones as well as from profundal zones (down to 150 m deep). We found it in late summer on shallow sand with some macrophytes. Due to the reduced natatory setae on A 2 and the presence in the profundal zone, the species is believed to crawl in and on sediments. In the type locality, we found a sex ratio close to 1: 2 (8 males and 18 females recovered). No juveniles were found.

The species can be distinguished from:

Tonnacypris edlundi n. sp. by its larger size, more narrow anterior calcified lamella, short claw G 2 on A 2, shorter natatory setae on A 2, group of four setae next to β seta on Md palp, serrated tooth bristles on the third endite of Mx, seven setae on the first segment of Mx palp, and distinct indentation on terminal segment of right clasping palp of male.

Tonnacypris glacialis by its broadly rounded posterior margin, anterior and posterior pegs on the calcified lamella of LV, and distinct indentation on terminal segment of right clasping palp of male.

Tonnacypris lutaria by its broadly rounded posterior margin, anterior and posterior pegs on the calcified lamella of LV, and distinct indentation on terminal segment of right clasping palp of male. 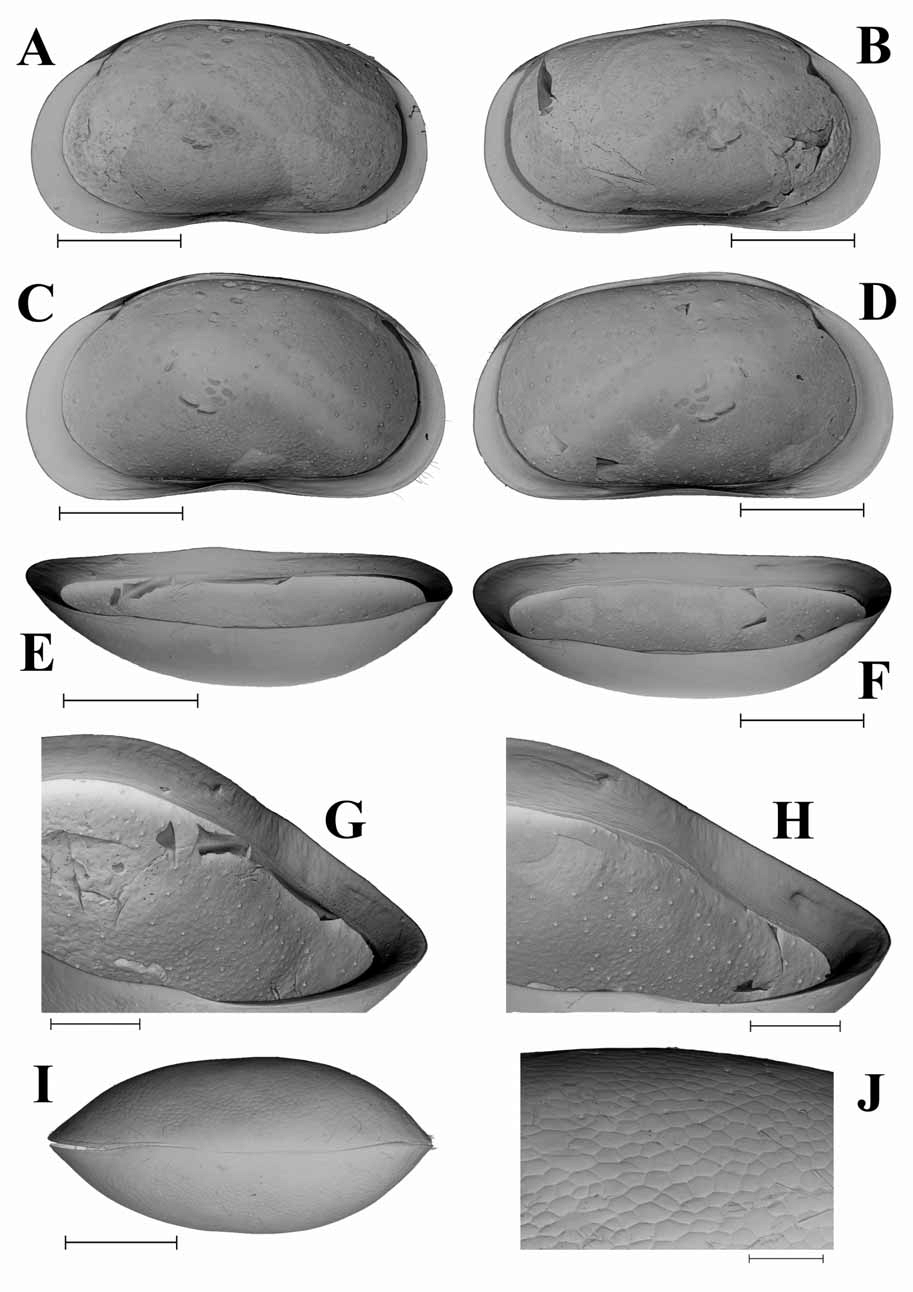 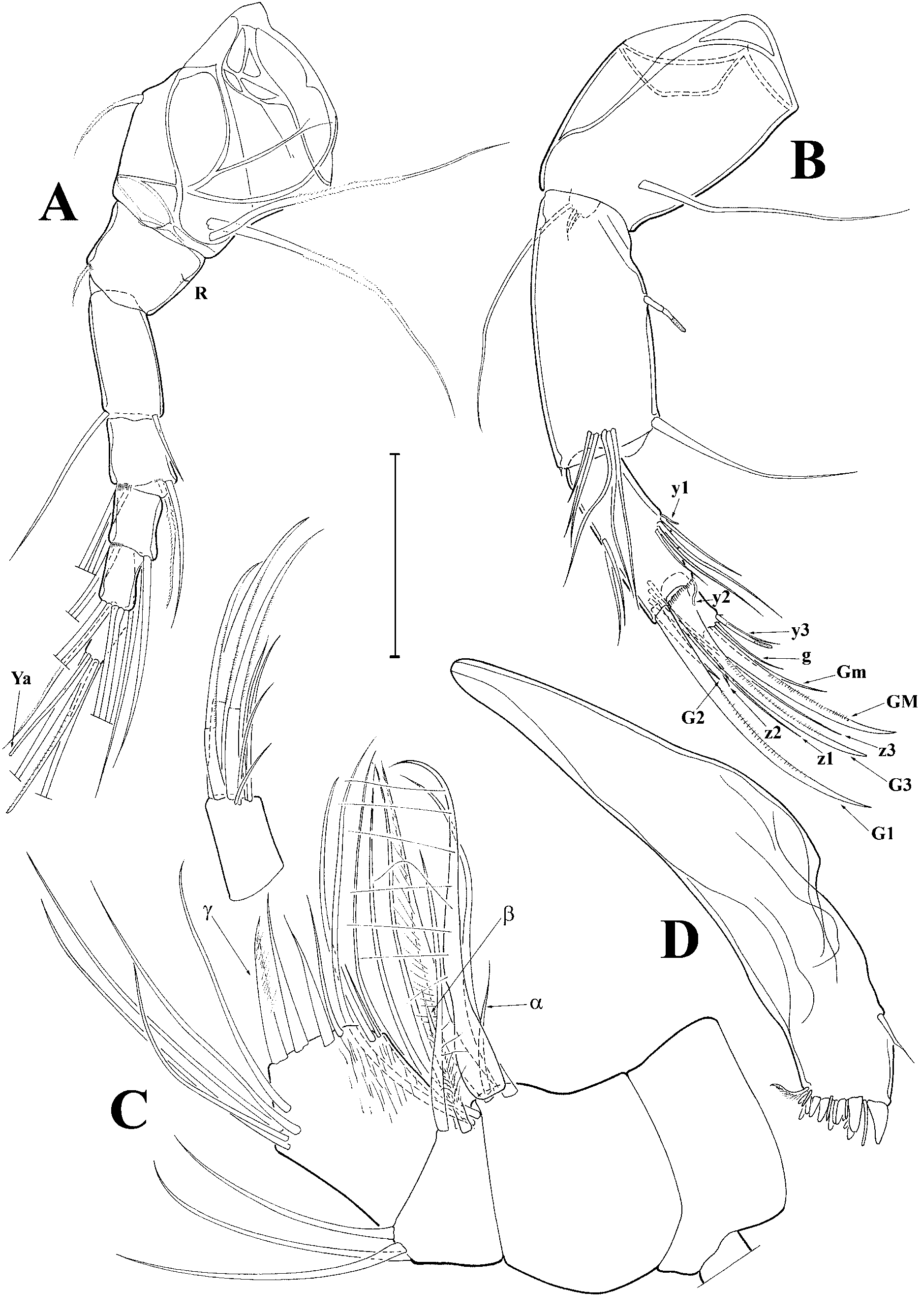 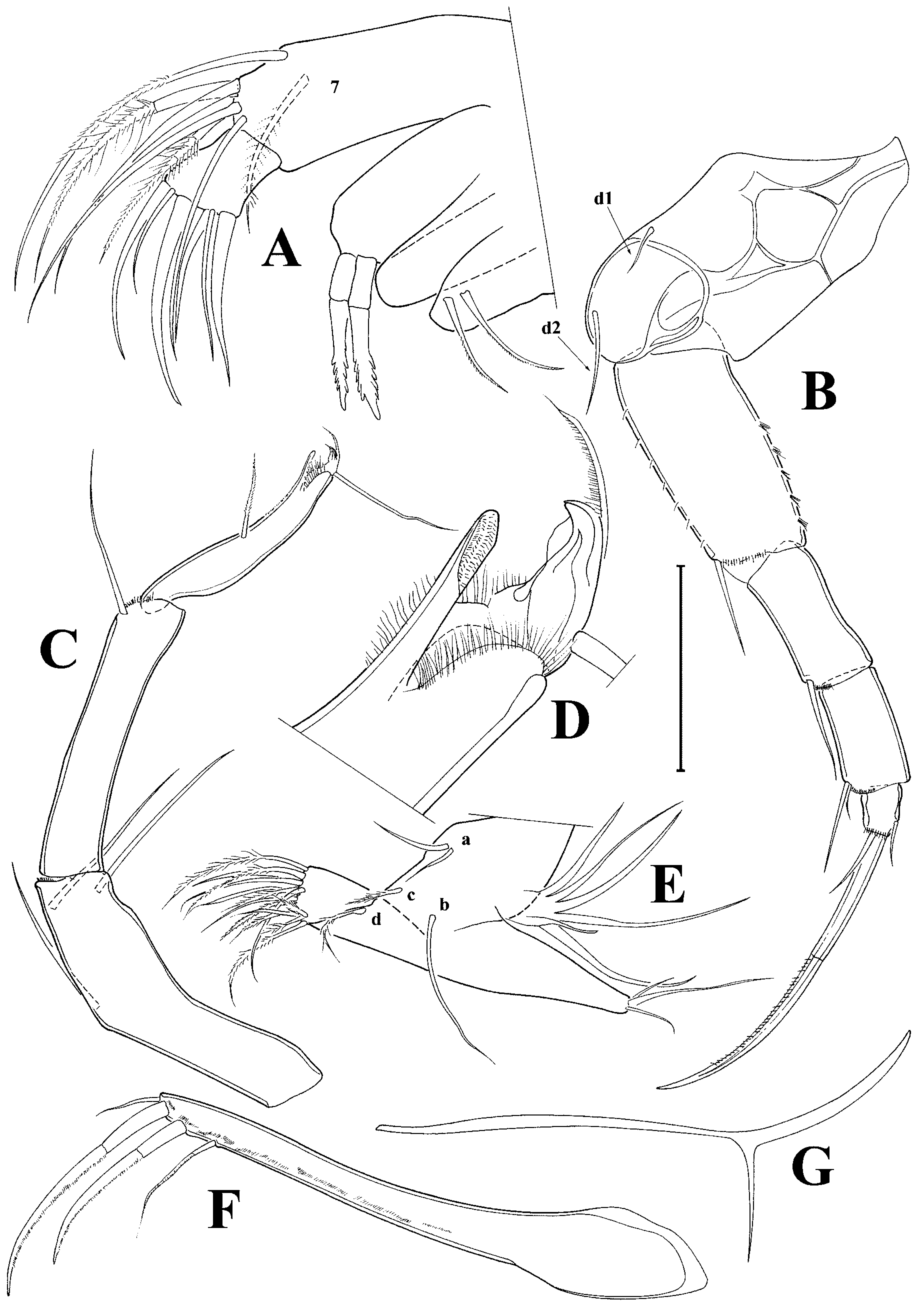 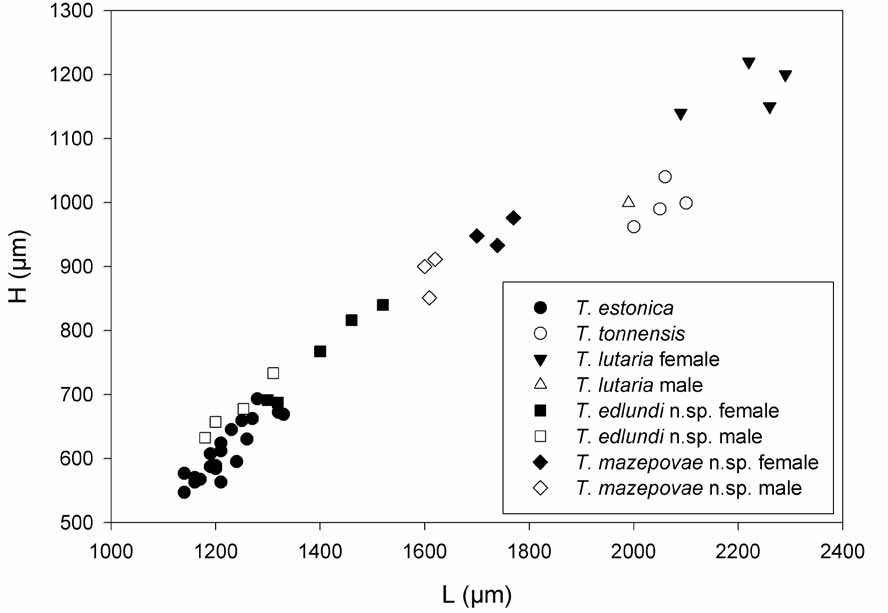