The colonies are abundant along the southern coast of Madagascar. In large club-shaped lobes, isolated or grouped on a common base ( Fig. 21 View FIGURE 21 A). All specimens have a clear naked tunic on the head and varied epibionts on the basal parts. The colour in formalin is pink or light purple and the consistency is cartilaginous. The zooids are deeply retracted into the tunic making depression at the colony surface. The zooids have a same aspect in all species of the genus. Both siphons have 6 large lobes divided in five or 6 digitations ( Fig. 21 View FIGURE 21 B). A pigment spot is constant between the oral lobes. The oral tentacles are numerous in three orders of size along a single ring behind a large velum. The thoracic musculature ( Fig. 21 View FIGURE 21 D) is made of crossed longitudinal and oblique fibres. According to the colonies the branchial sac has 18 to 21 rows of stigmata and about 50 stigmata in a half row ( Fig. 21 View FIGURE 21 C). There are no parastigmatic vessels. The transverse vessels in high blades have no papillae. The less contracted thoraces are 9mm in length. The abdomen is variable and may reach 25mm in length in immature zooids. The stomach is in posterior position with a smooth wall except the typhlosolis in a narrow groove. The bi-lobed anus opens at the base of the thorax. More than a hundred testis vesicles have been counted. They occupy the both sides of the gut loop behind the stomach level ( Fig. 21 View FIGURE 21 E). The sperm duct is red. The ovary is in the centre of the testis. Only one immature embryo has been found in the abundant Madagascar material, a seasonal reproduction is likely.

Only two other Somozoa species can be considered as valid:

S australiensis Kott, 1990   from South Australia has only 12 to 14 rows of stigmata and a stomach with ridges.

S. bellissima Kott, 1990   in a single colony lobe has 14 to 15 rows of stigmata, a smooth walled stomach and a post-stomach with several compartments (Kott’s fig. 59 A). 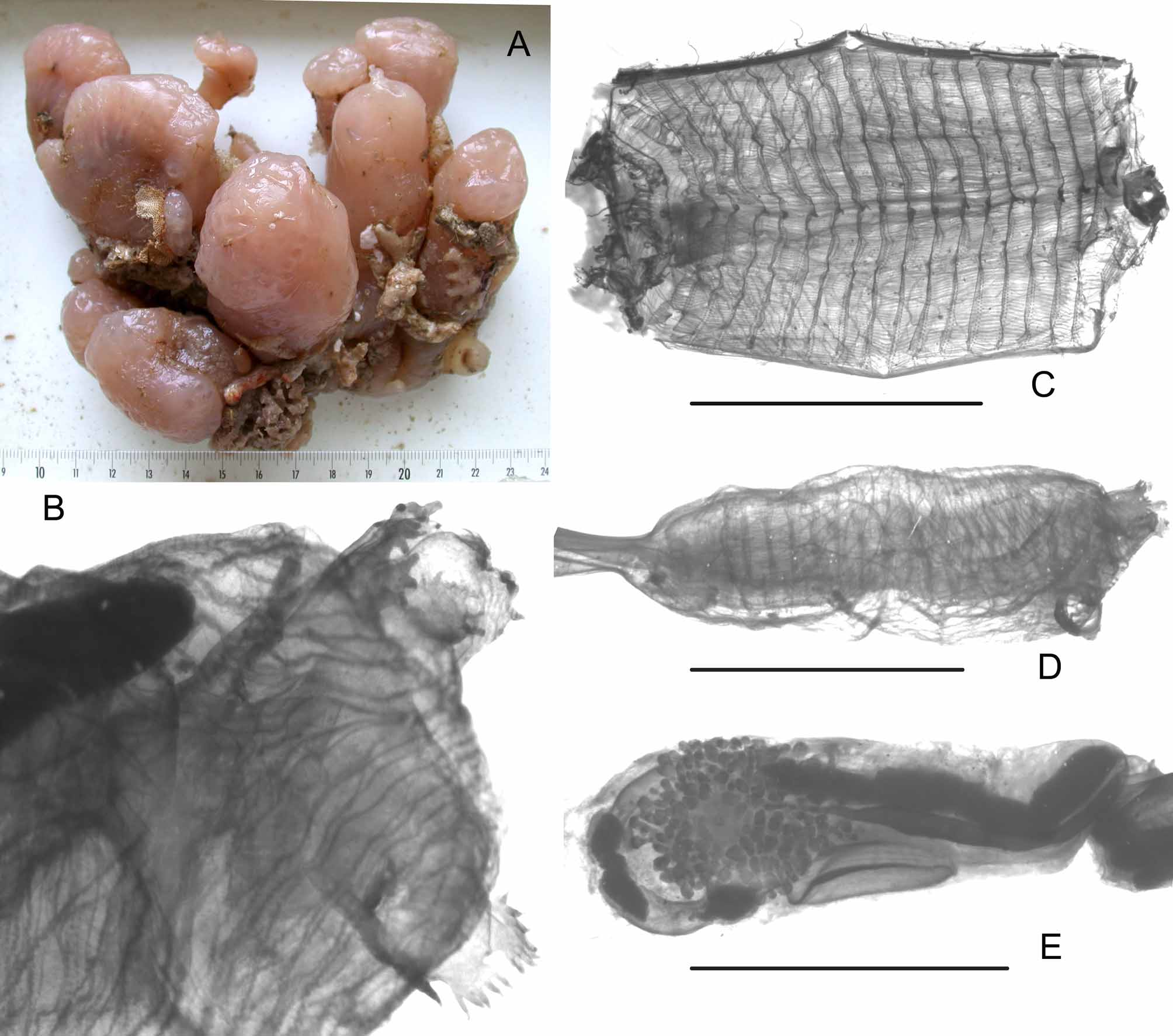