The single colony was white in life. Its shape is a pad of irregular outline 5.5cm long and 4.5cm high ( Fig. 4 View FIGURE 4. A B). The tunic is hard without sediment. The surface of the colony is smooth between large spaced hollows, each of them containing a circular system of zooids ( Fig. 5 View FIGURE 5 A). The oral siphons open at the periphery of the hole and the common cloacal opening forms a tubular chimney erect in the centre of the system. The largest crater is 9 mm in diameter. The internal tunic is more gelatinous. The zooids ( Fig. 5 View FIGURE 5 F) are stout, light brown in formalin The 6 long oral lobes are internally folded and seem to be bifid due to the contraction ( Fig. 5 View FIGURE 5 F). The rim of the atrial opening is anteriorly expanded in a stout languet and has 6 spiny lobes at the ventral edge ( Fig. 5 View FIGURE 5 B,D). The longitudinal muscles are dense on the thorax with two of them particularly strong on the sides of the dorsal line. About 16 oral tentacles have three orders of size. The peripharyngeal ring is thick. The branchial sac has 18 rows of about 20 stigmata on each side of the imperforated dorsal line ( Fig. 5 View FIGURE 5 C). The abdomen ( Fig. 5 View FIGURE 5 F) is shorter than the thorax which is always contracted. The stomach is rectangular either with an almost smooth wall or with 2 or 3 folds or sometimes with 5 to 6 irregular crests. An annular post-stomach is present. The post abdomen ( Fig. 5 View FIGURE 5 F) is longer than the thorax plus abdomen. The ovary is far from the abdomen in front of a double line of testis vesicles that reaches the heart. The extremity of the post-abdomen was stained in red in some zooids. One or 2 embryos are in the atrial cavity, they are of a deep red, the largest 1.1mm in length.

Among the Aplidium   species having a naked tunic and circular systems A. hestia   differs by its large craters with a central chimney, numerous rows of stigmata and a dentate rim of the atrial aperture. 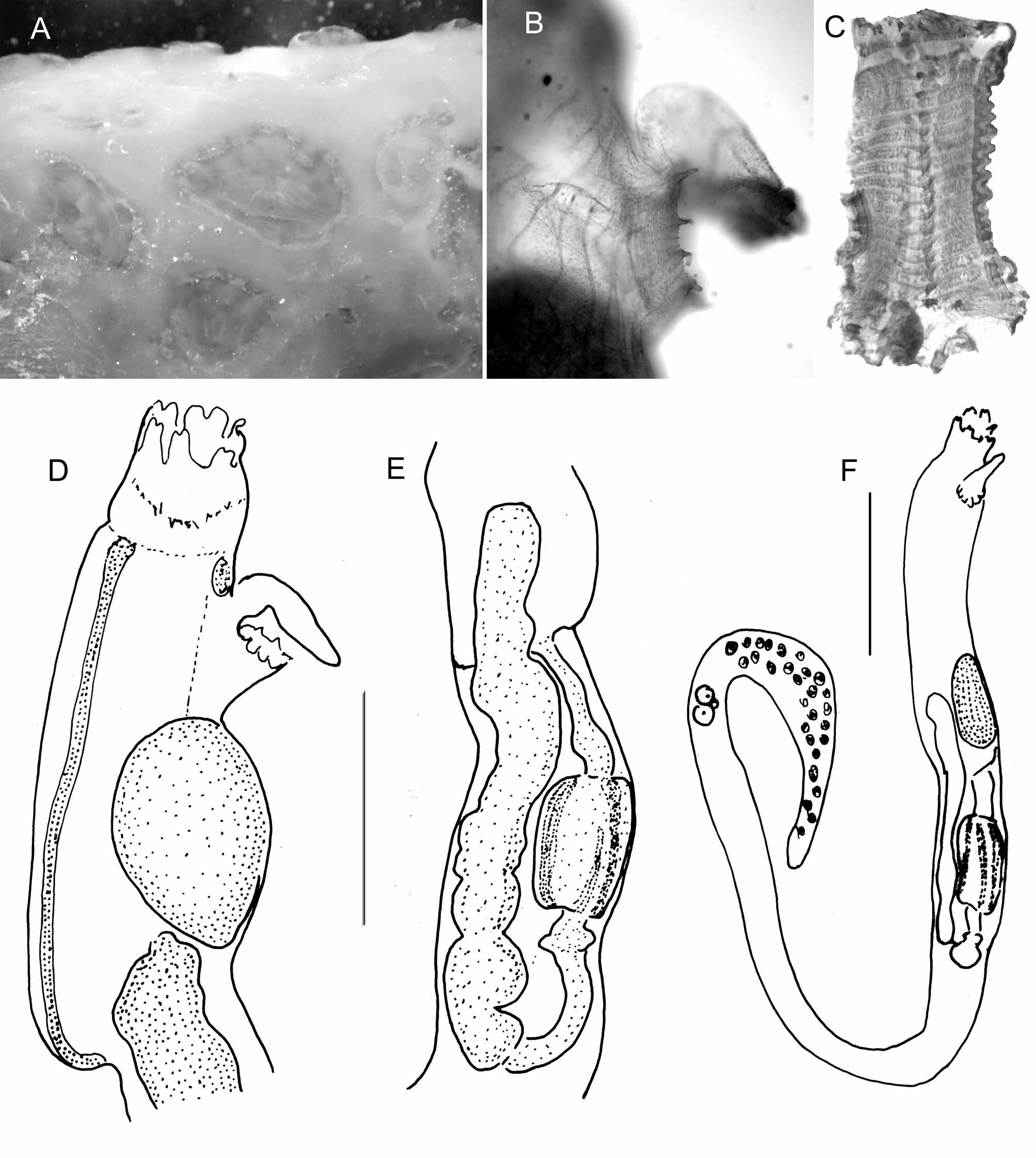