Diagnosis. In the group of species with setulae present on meron below spiracle, L. absentiseta   can be recognised by the absence of the 2 p preapical setae on mid femur.

Etymology. The name absentiseta   refers to the reduction in the strength of the leg setae and the absence of the 2 p preapical setae on mid femur.

Thorax. Ground-colour black. Scutum and scutellum densely dusted; in anterior view light grey, in posterior view grey to light grey and with no pattern of darker or undusted vittae, tinged here and there with yellowish in ♀ especially before suture and at sides; pleura also light grey. Anterior spiracle yellowish. Acr setulae in 6–7 irregular rows at suture. Dc 2+4, only the prsc pair strong, the others only twice as long as a ground-setula. 2 pprn, inner seta sometimes weak. 0–1+1 ia, both setae fine and short, the prst seta sometimes absent. 1+1 sa, both strong. 1 strong and 1 weaker proepisternal setae. 1 strong proepimeral, shorter than the strong proepisternal, with 5–6 adjacent setulae. Anepisternum with only a setula in upper anterior corner; posterior row with 3 strong and 3 weak setae. 3 strong kepst, lower one closer to posterior than to anterior. Meron with 1–2 conspicuous setulae below spiracle, bare above hind coxa. Scutellum with disc densely setulose, with a few setulae in 1 row descending on to sides, otherwise sides and ventral surface bare.

Legs. Black, knees and basal 1/4 to 1/3 of all tibiae yellow. Fore coxa bare behind. Fore femur without av; pv row complete, the setae fine, short and sparse, shorter than femoral depth; pd row complete. Fore tibia with a strong submedian pv seta; with strong d, p and pv apical setae. Fore tarsomeres 2–4 of ♂ rather short, not as long as tarsomere 1, otherwise fore tarsomeres without modifications. Mid femur without av setae; pv surface also without setae but with 1–2 longer setulae near base; a surface without differentiated setae; without p preapicals. Mid tibia with 1 submedian p seta; with strong d, a, v, and pv apicals, and a weak p apical. Mid tarsomeres without modifications. Hind coxa bare on posterior apical margin. Hind femur with 1–2 short av setae around middle in ♂, without av in ♀, and 2–3 short pv in basal third, several of the setulae on ventral surfaces longer and more erect; ad row complete; d preapical absent. Hind tibia without av or pd setae; ♀ with 1 ad, d and ad preapicals, and av and pv apicals; ♂ with the ground-setulae long and erect, especially on ad, a and av surfaces, the ad seta and the d and ad preapicals fine and not very distinct from these setulae ( Fig. 358 View FIGURES 358–359 ), the av apical strong but at tip of v and pv surfaces with several fine hair-like setae. Hind tarsus of ♂ ( Figs 358–359 View FIGURES 358–359 ) with basal tarsomere short, flattened, greatly expanded on posterior side, and with a dense brush of orange setulae along p and all over v surfaces, and with long p setulae also on tarsomeres 2 and 3; without modifications in ♀, though basal tarsomere is rather thickened.

Biology. Adults have been collected on beaches. 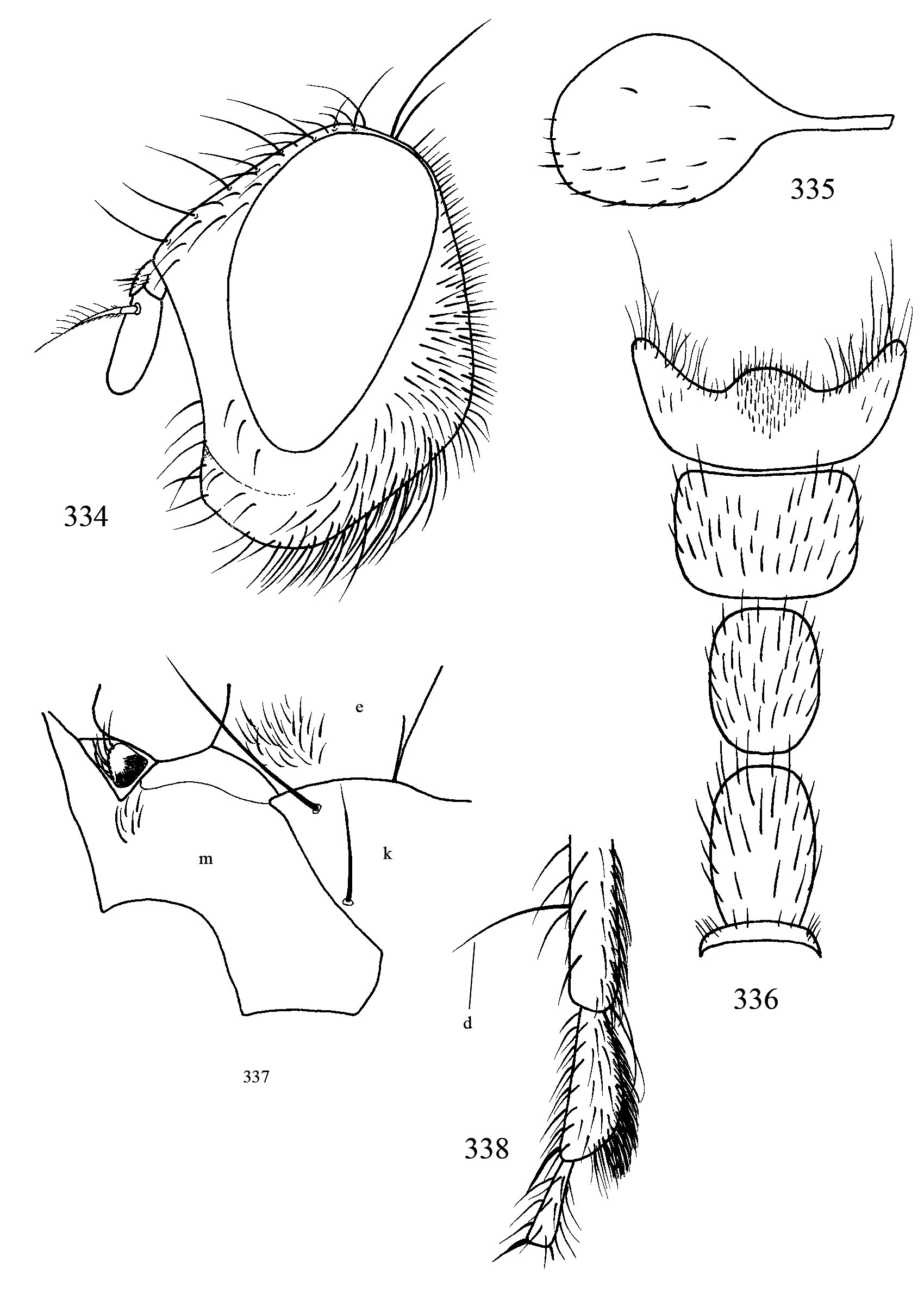