Diagnosis. In the group of species with a seta on posterior apical margin of hind coxa and yellow palpus, L. incana   can be recognised in the ♂ sex by the conformation of hind tibia and basal hind tarsomere ( Figs 225–226 View FIGURES 223–227 ), and in both sexes by the position of the vibrissa high above the mouth-margin ( Fig. 224 View FIGURES 223–227 ).

Etymology. The Latin adjective “incanus” (feminine: “incana”) means grey, and the name refers to the light grey appearance of this species.

Legs. Black, mid tarsomeres not reddish. Fore coxa bare behind. Fore femur with a row of short spinules on av surface; pv row complete, the setae fine, in basal half much longer than femoral depth, interspersed with multiserial v to pv spinules; all the ventral spinules stronger in ♀ than in ♂; pd row complete. Fore tibia without submedian seta; with strong d, pd and pv apical setae, and a strong ad apical. Fore tarsomeres of ♂ rather short, without modifications. Mid femur on av and pv surfaces with rows of short spinules that run from base to apex, stronger in ♀ than in ♂, and in addition with a few short pv setae in basal third, not equal to femoral depth; basal half also with a row of short strong a setae, culminating in a strong seta at middle; 2 p preapicals. Mid tibia with 1 strong p seta; with strong d, a, v, pv and short p apicals, the d apical placed well before apex. Mid tarsomeres without modifications. Hind coxa with a seta on posterior apical margin. Hind femur with 3–4 av setae in apical half, the longest equal to femoral depth; pv surface with 3–4 setae in basal half, longer than femoral depth, apical half with a series of spinulose setulae; ad row complete; 1 d preapical. Hind tibia with 1 ad and 1 short av; in ♂, d preapical relatively short and fine, and the ad preapical present only as a setula ( Fig. 225 View FIGURES 223–227 ), in ♀ these setae long and strong; in ♂ apex of tibia on av to pv surfaces with numerous short fine curled hairs, without apical setae ( Fig. 225 View FIGURES 223–227 ); ♀ without modifications at apex, with 1 av and 1 pv apical setae. Hind tarsus of ♂ ( Figs 225–226 View FIGURES 223–227 ) with basal tarsomere slightly swollen in apical half and covered with a brush of dense setulae on av to pv surfaces, which continue on to 2nd tarsomere, and with some short hair-like setulae on basal half of ventral surface; without modifications in ♀.

Abdomen. Ground-colour black. Tergites grey dusted dorsally and laterally, in extreme posterior view ♂ with a pair of faint dark spots on tergites 3 and 4 ( Fig. 227 View FIGURES 223–227 ), these markings also indistinctly present in ♀. ♂ epandrium grey dusted. ♀ ovipositor with exposed tergites dusted grey to brownish-grey. Sternites 1–5 grey, but sternite 5 of ♂ shining. Setae only present on tergite 5, with 1 pair of median and 2 of lateral discals, and 4 pairs of erect marginals, shorter in ♀ than in ♂. ♂ sternites 2–4 with sparse setulae ( Fig. 228 View FIGURES 228–230 ).

Ƌ terminalia. Epandrium separated from tergite 5 by syntergosternite 8, which has 2 spiracles; without large setae; weakly produced lobe-like ventrally. Tergite 6 absent. Sternite 6 present as a small plate, withdrawn beneath sternite 5. Surstylus absent, i.e. fused to epandrium without trace ( Fig. 229 View FIGURES 228–230 ). Cercal plate divided dorsally and ventrally ( Fig. 230 View FIGURES 228–230 ). Hypandrium attached at two points: to a rod originating from wall of epandrium close to upper outer edge of cercal plate; and via a tiny apparent praegonite to lower anterior corner of epandrium. Phallic complex ( Figs 231–232 View FIGURES 231–232 ): hypandrium with a pair of long finger-like processes at posterior end that meet and unite with base of epiphallus, and with a beak-like process at posterior ventral end; praegonite and postgonite present, the latter long and bifurcate, the branches not pointed; phallapodeme large, at mid-length joined to hypandrium by a small bridge; phallus long, tube-like, simple, juxta large, without spinules, without a pair of processes flanking it near base but with a posterior process at base.

Distribution. Known only from Australia ( SA). 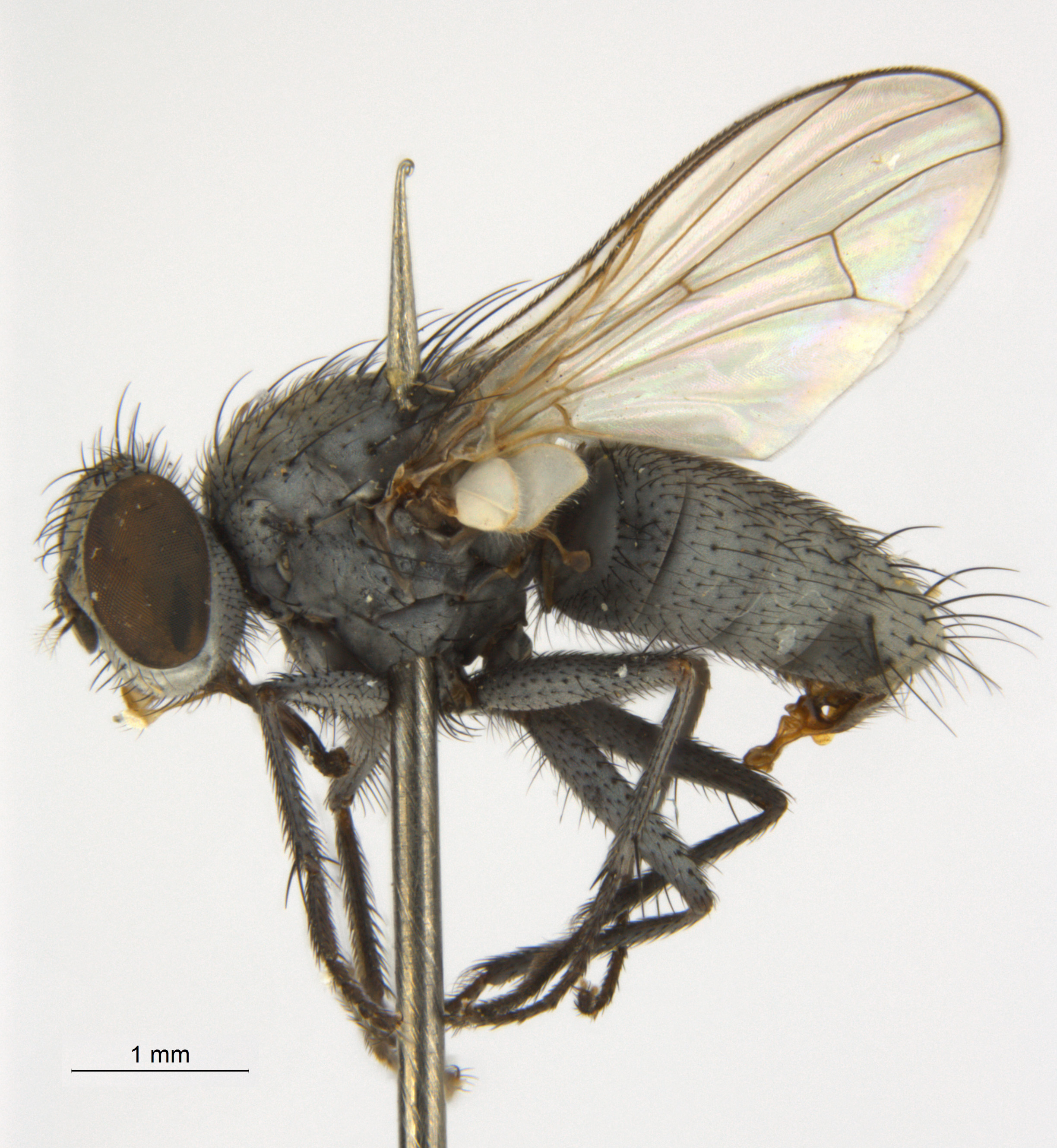 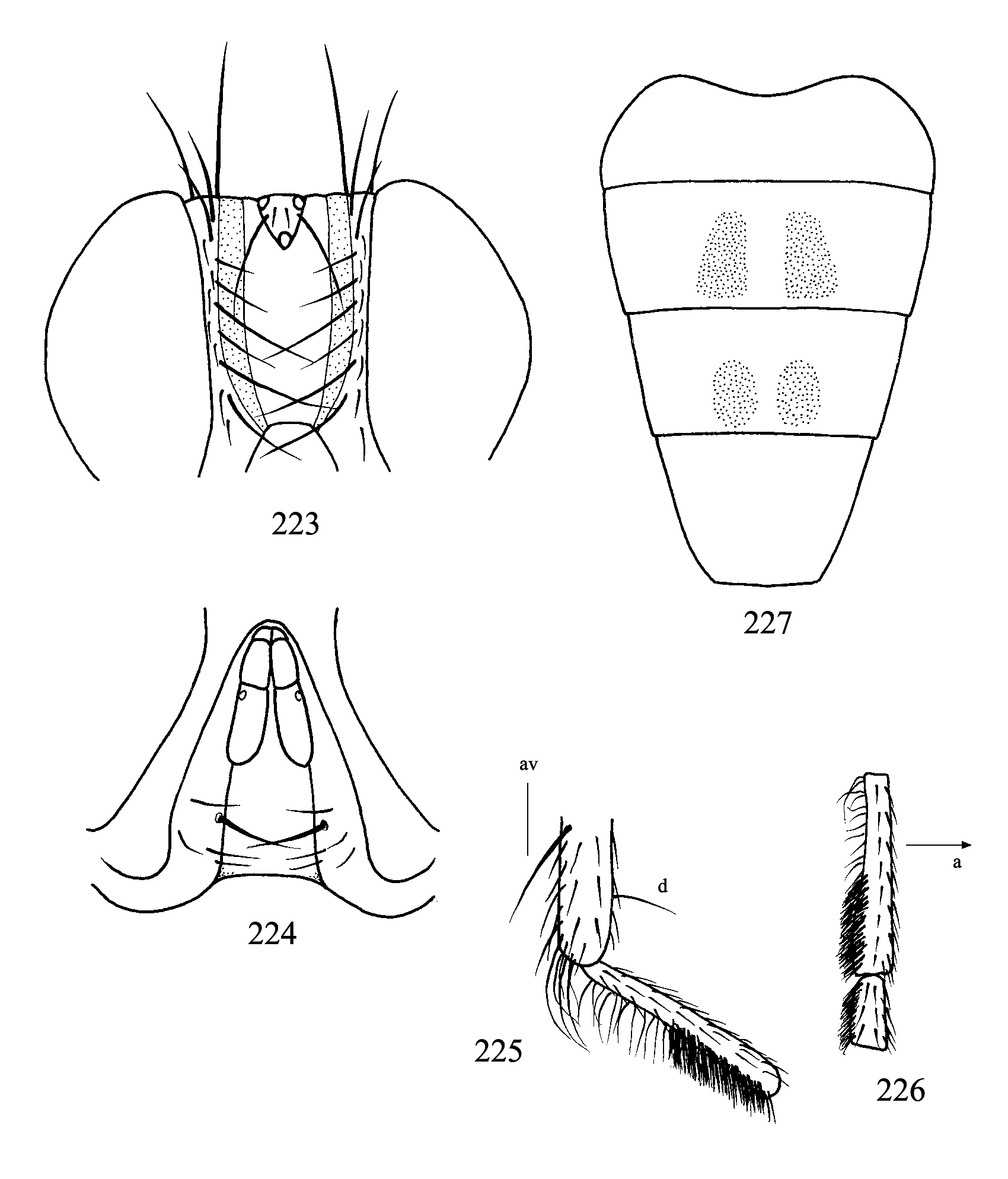 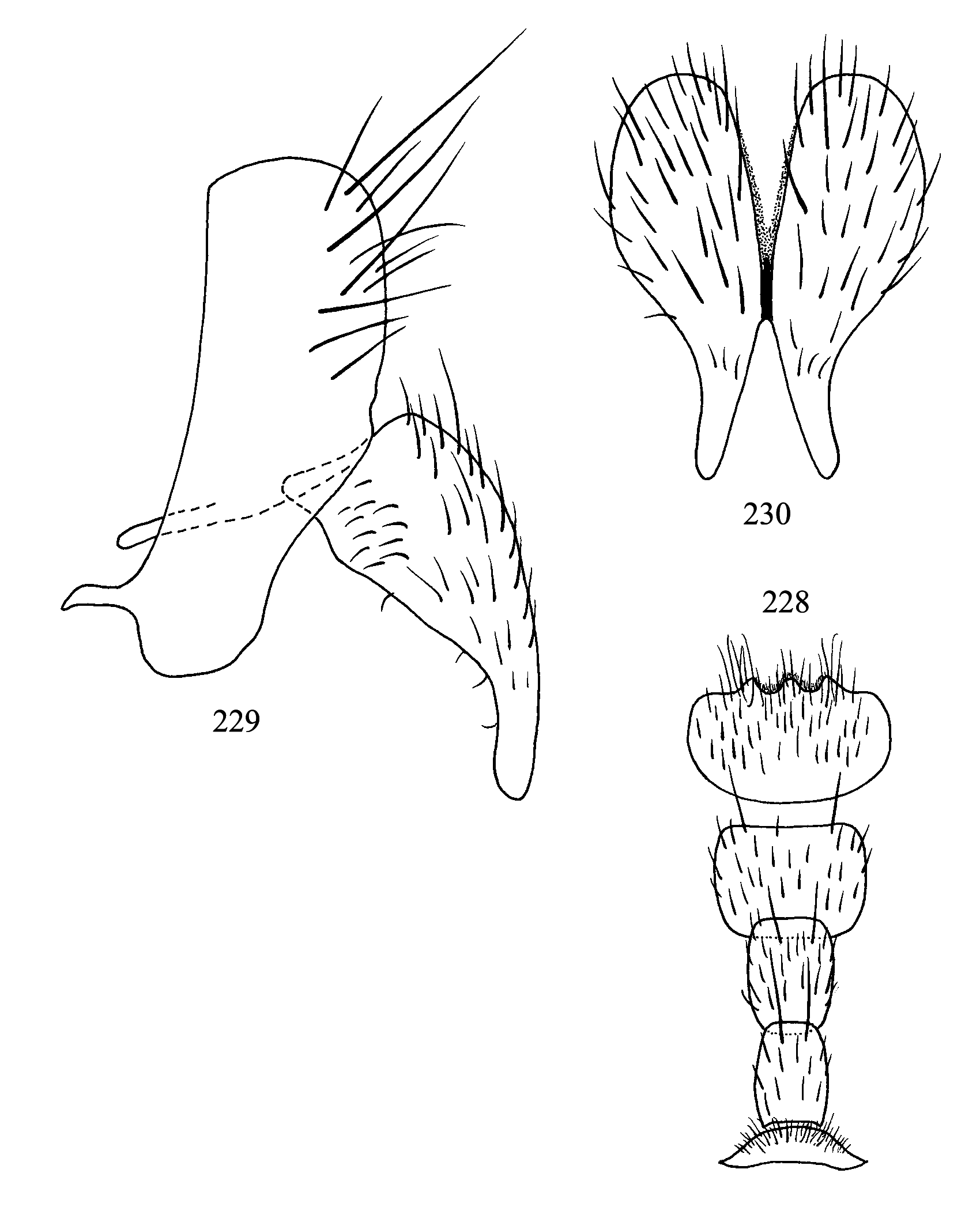 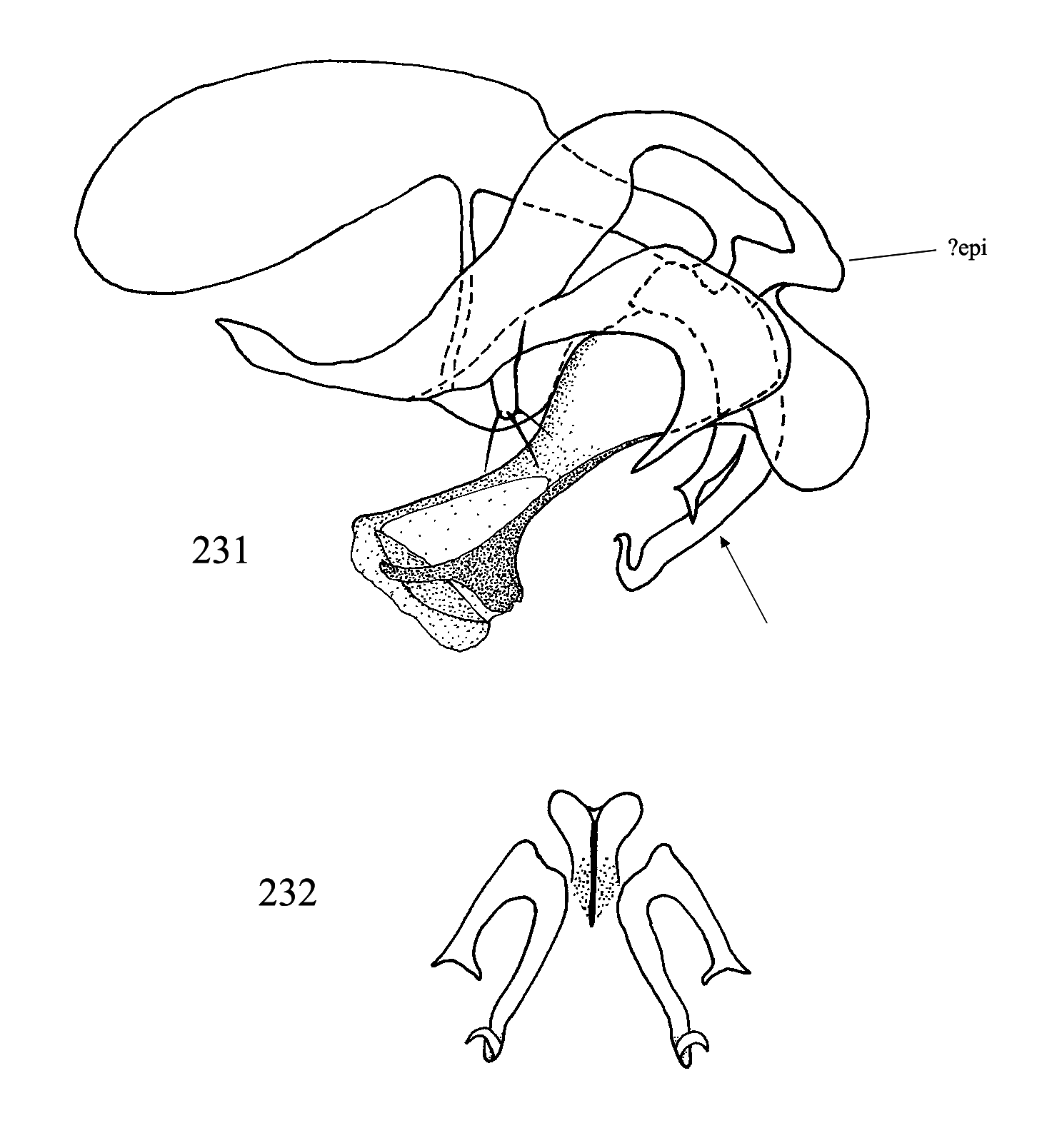