Diagnosis. In the group of species with a seta on posterior apical margin of hind coxa, L. brendana can be immediately recognised by the forwardly-curved vein M ( Figs 258 View FIGURE 258 , 263 View FIGURES 263–265 )

Etymology. The species is named after my wife Brenda.

Description Ƌ ♀. Head ( Fig. 259 View FIGURES 259–262 ). Ground-colour black. Frons at broadest point 0.4 (♂) or 0.38 (♀), at lunula 0.35, of maximum head-width (frontal view). Fronto-orbital plate uniformly pruinose except between orbital setae and vertex, together with frontal triangle, parafacial, face, gena and most of occiput silvery-white pruinose, rarely tinged with yellow in ♀; frontal triangle very broad, most of frontal vitta suppressed in ♂ but visible in both sexes except when viewed from below. Lower orbital seta weak. Parafacial broad, as broad as postpedicel; bare on upper half. Antenna black, only apical edge of pedicel obscurely orange; postpedicel short, 2.4 times as long as broad, only a little longer than pedicel in ♂, falling short of mouth-margin by 0.5–0.6 its length. Arista plumose, the hairing at widest point 1.4–1.5 times width of postpedicel. Vibrissa strong. Gena broad, 0.26 (♂) or 0.2 (♀) of vertical eye-length; genal setae rather strong and dense. Palpus dull yellow basally to brown apically, strongly swollen at tip ( Fig. 260 View FIGURES 259–262 ).

Thorax. Ground-colour black. Scutum and scutellum rather densely grey dusted; postpronotal lobe, notopleuron and pleura very light grey. Viewed from in front, scutum wholly silvery dusted in ♂, grey in ♀; in posterior view appearing mostly grey dusted except for a light grey band along suture, running from notopleuron to dc, with weakly indicated black markings as follows: in ♂, a pair of vittae running from neck to 3rd post dc, a small patch around prst ia and sa, and a small patch along ia line that is joined at suture to the dc line; in ♀, these dark markings often reduced and hardly visible, scutum mainly uniformly grey dusted in posterior view, but more often with a median dark line too, and often this and the dc and other lines coalescing to form a broad subshining area before and just after suture; scutellum grey dusted. Anterior spiracle pale. Scutum entirely covered with dense short setulae, not forming rows even along acr lines. Dc 2+4, anterior 2 post setae only twice as long as the groundsetulae. 2 pprn. 1+0–1 ia, with no trace of post setae in ♂, the posterior seta present but weak in ♀. 1+1 sa, both strong. 1 strong and 1 weaker proepisternal setae. 1 strong proepimeral, slightly shorter than the strong proepisternal, with 3–5 adjacent setulae. Anepisternum with a very short seta in upper anterior corner; posterior row with 3 strong and 3–4 weak setae. 3 strong kepst, lower one closer to posterior than to anterior. Meron bare below spiracle and above hind coxa. Scutellum with disc densely setulose, 2 irregular rows descending on to sides, otherwise sides and ventral surface bare.

Legs. Black, except for reddish knees, these more broadly so in ♀. Fore coxa bare behind. Fore femur with a row of short spinules on av surface; pv row complete, the setae fine, in basal half longer than femoral depth, interspersed with multiserial v to pv spinules; all the ventral spinules stronger in ♀ than in ♂; pd row complete. Fore tibia without submedian seta; with d, pd and pv apical setae, only the d strong in ♂. Fore tarsomeres of ♂ rather short, without modifications. Mid femur on av and pv surfaces with rows of short spinules that run from base to apex, and in addition with a few short pv setae, and in ♀ also av, in basal half, not equal to femoral depth; basal half also with a row of short strong a setae, culminating in a strong seta at middle; 2 p preapicals. Mid tibia with 1 strong p seta; with strong ad, av, v, and p apicals, the p short in ♂, the ad apical a little before apex. Mid tarsosmeres without modifications. Hind coxa with a seta on posterior apical margin. Hind femur in ♂ with 5 av setae in apical 2/3, the longest longer than femoral depth, in ♀ with 1 av at middle preceded by several short setulae; pv surface in ♂ with a series of short setae along most of length, culminating in a longer preapical seta, reduced in ♀ to a few short setae in basal half; a few spinulose setulae interspersing the av and pv setae or beyond; ad row complete; 2 d preapicals. Hind tibia with 1 ad, with the ground-setulae on a and ad surfaces rather long; 0– 1 av seta; ad and d preapical setae long and strong; 1 av and 1 pv apical setae. Hind tarsus of ♂ with basal tarsomere slightly swollen, with a uniform covering of short dense brush-like setulae along p to pv surfaces and a row of setulae along a surface ( Fig. 261 View FIGURES 259–262 ); without modifications in ♀.

Abdomen. Ground-colour black. Tergites grey dusted, tinged with yellow; in ♂ with paired black spots on syntergite 1+2 and tergites 3–4 ( Fig. 264 View FIGURES 263–265 ), and on sides of abdomen with a small dark spot on hind-margin of tergite 5 and another across the suture dividing tergites 4 and 5; in ♀ the dorsal spots much larger ( Fig. 265 View FIGURES 263–265 ) and running as bands down on to lateral margins of tergites, and tergite 5 also with a pair of sharply-defined dark spots extending down on to sides. ♂ epandrium grey dusted. ♀ ovipositor with exposed tergites dusted grey to brownishgrey. Sternites 1–5 grey, but sternite 5 of ♂ shining. Setae only present on tergite 5, with 1 pair of median and 2 of lateral discals, and 3–4 pairs of erect marginals. ♂ sternites 2–4 with sparse setulae ( Fig. 262 View FIGURES 259–262 ).

Ƌ terminalia. Epandrium separated from tergite 5 by syntergosternite 8, which has 2 spiracles; without large setae; weakly produced ventrally. Tergite 6 and sternite 6 absent. Surstylus absent, i.e. fused to epandrium without trace ( Fig. 266 View FIGURES 266–267 ). Cercal plate divided dorsally and ventrally ( Fig. 267 View FIGURES 266–267 ). Hypandrium narrow, attached at two points: to a rod originating from upper outer edge of cercal plate; and via a tiny apparent praegonite to lower anterior corner of epandrium. Phallic complex ( Fig. 268 View FIGURE 268 ): hypandrium with a pair of narrow processes at posterior end that meet and unite with base of the rudimentary epiphallus; praegonite and postgonite present, the latter long, trifurcate, the median branch by far the longest; phallapodeme large, at mid-length joined to hypandrium by a narrow bridge; phallus long, with a very long and strongly sclerotised basal tube, simple, juxta large, without spinules, with a pair of large processes flanking it at mid-length which each bear two finger-like processes.

Biology. Adults have been collected on a beach and at the mangrove—salt marsh boundary. 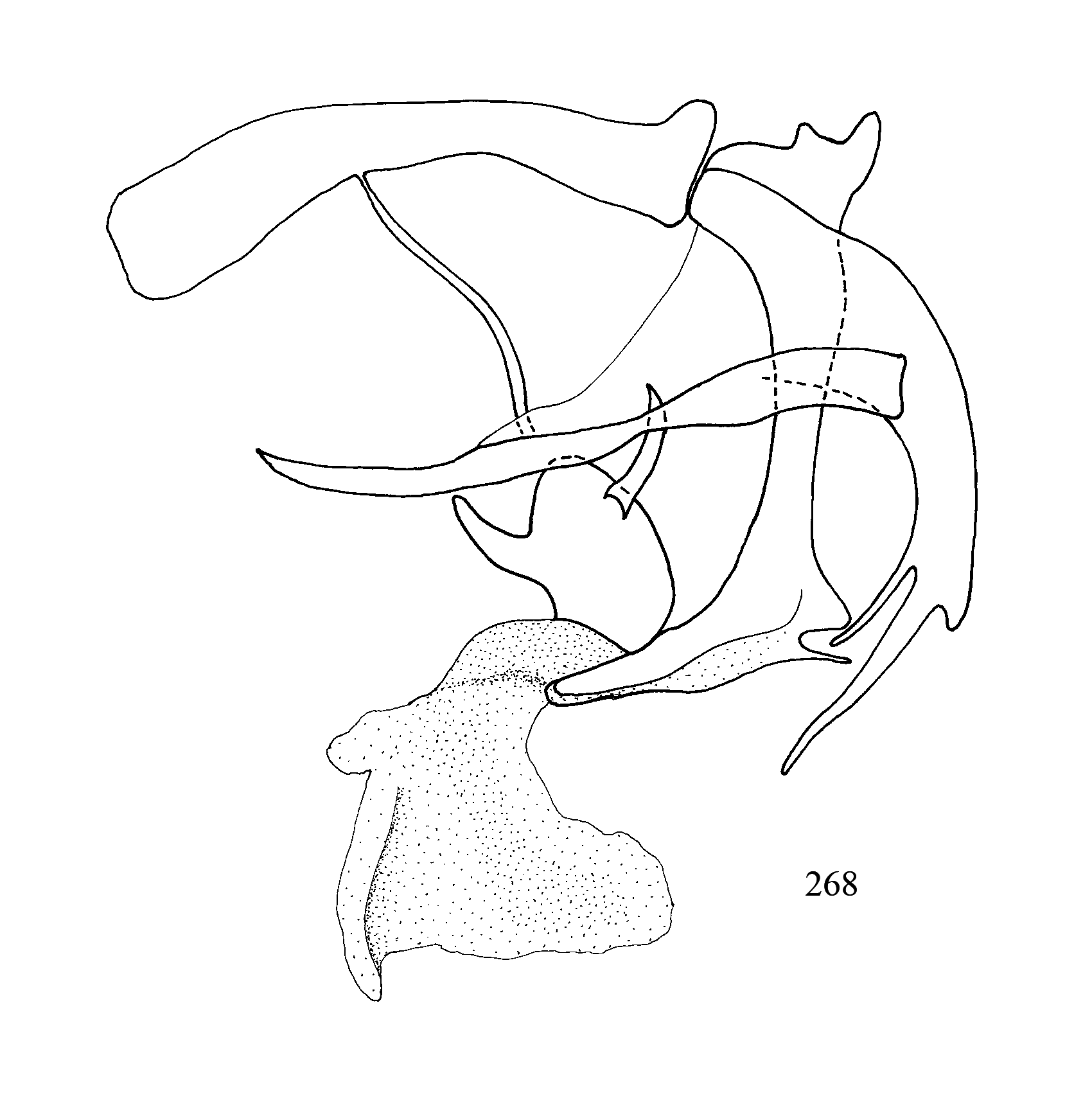