Diagnosis. In the group of species with a seta on posterior apical margin of hind coxa and yellow palpus, L.

hamulifera can be recognised in the ♂ sex by the silvery frontal area with reduced frontal vitta, and by the conformation of hind tibia and basal hind tarsomere ( Figs 239–240 View FIGURES 237–242 ).

Etymology. The name hamulifera   is a diminutive formed from the Latin noun “hamus” (= “hook” or “talon”) to which is added an adjective based on “ferre” (“to carry”), and refers to the setulose ventral finger-like process at the tip of hind tibia ( Figs 239–240 View FIGURES 237–242 ).

Thorax. Ground-colour black. Scutum and scutellum rather densely dull grey dusted in ♂, lighter in ♀, postpronotal lobe and notopleuron whitish, pleura grey. Viewed from in front, scutum wholly silvery dusted in ♂; in posterior view appearing mostly dark except for a grey band along suture, running from notopleuron to dc, and a pair of grey post vittae between dc and ia, which join a narrow pale transverse band in front of scutellum; in ♀, most of the grey dust on scutum replaced by ill-defined brown markings as follows: a broad median line, postsuturally occupying most of the space between dc and coalescing there with a pair of narrow darker vittae running through prst and post dc; a small patch around prst ia and sa; a broad post vitta between ia and sa; scutellum grey dusted, partly tinged with brown in ♀. Anterior spiracle dark. Acr setulae in 4–5 irregular rows at suture; with a pair of weak but distinct prsc setae. Dc 2+3, all strong. 2 pprn. 1+1 ia, anterior post seta absent. 1+1 sa, both strong. 1 strong and 1 weaker proepisternal setae. 1 strong proepimeral, slightly shorter than the strong proepisternal, with 5–8 adjacent setulae. Anepisternum with a very short seta in upper anterior corner; posterior row with 3 strong and 3 weak setae. 3 strong kepst, lower one closer to posterior than to anterior. Meron bare below spiracle and above hind coxa. Scutellum with disc densely setulose, 1–2 rows descending on to sides, otherwise sides and ventral surface bare.

Legs. Black, except for knees and mid tarsomeres which are reddish, the knees more broadly so in ♀. Fore coxa bare behind. Fore femur with a row of short spinules on av surface; pv row complete, the setae fine, in basal half much longer than femoral depth, interspersed with multiserial v to pv spinules; all the ventral spinules stronger in ♀ than in ♂; pd row complete. Fore tibia without submedian seta; with strong d, pd and pv apical setae, and a strong ad apical. Fore tarsomeres of ♂ rather short, without modifications. Mid femur on av and pv surfaces with rows of short spinules that run from base to apex, stronger in ♀ than in ♂, and in addition with a few short pv setae in basal third, not equal to femoral depth; basal half also with a row of short strong a setae, culminating in a strong seta at middle; 2 p preapicals. Mid tibia with 1 strong p seta; with strong d, a, v, pv and short p apicals, the d apical placed well before apex. Mid tarsomeres without modifications. Hind coxa with a seta on posterior apical margin. Hind femur with 3 av setae in apical half, the longest equal to femoral depth; pv surface with 3–4 setae in basal half, longer than femoral depth, apical half with a series of spinulose setulae; ad row complete; 1 d preapical. Hind tibia with 1 ad and 1 strong av which is rather close to apex of tibia; in ♂, d preapical relatively short and fine, and the ad preapical present only as a setula ( Figs 239–240 View FIGURES 237–242 ), in ♀ these setae long and strong; in ♂ apex of tibia without v apical setae but drawn out ventrally into a short densely setulose finger-like process ( Figs 239–240 View FIGURES 237–242 ); ♀ without modifications at apex, with 1 av and 1 pv apical setae. Hind tarsus of ♂ with basal tarsomere slightly swollen in apical half and covered with dense setulae ( Figs 239–240 View FIGURES 237–242 ), with some short hair-like setulae on p surface and a long curled hair-like v seta at mid length; without modifications in ♀.

Abdomen. Ground-colour black. Tergites dull grey dusted dorsally and laterally, in ♂ sometimes unicolorous and sometimes with weakly indicated darker markings on syntergite 1+2 and tergites 3 and 4 in posterior view ( Fig. 241 View FIGURES 237–242 ); in ♀ with darker markings on tergites 3 and 4 as in ♂, and tergite 5 also dark on hind-margin, antero-lateral corners, and sides. ♂ epandrium grey dusted. ♀ ovipositor with exposed tergites dusted grey to brownish-grey. Sternites 1–5 grey, but sternite 5 of ♂ shining. Setae only present on tergite 5, with 1 pair of median and 2 of lateral discals, and 4 pairs of erect marginals. ♂ sternites 2–4 with sparse setulae ( Fig. 242 View FIGURES 237–242 ).

Ƌ terminalia. Epandrium separated from tergite 5 by syntergosternite 8, which has 2 spiracles; without large setae; rather produced ventrally ( Fig. 243 View FIGURES 243–244 ). Tergite 6 absent. Sternite 6 present as 2 small symmetrical plates, joined together at one end, withdrawn beneath sternite 5. Surstylus absent, i.e. fused to epandrium without trace ( Fig. 243 View FIGURES 243–244 ). Cercal plate divided dorsally and ventrally ( Fig. 244 View FIGURES 243–244 ). Hypandrium attached at two points: to a rod originating from upper outer edge of cercal plate; and via a tiny apparent praegonite to lower anterior corner of epandrium. Phallic complex ( Fig. 245 View FIGURE 245 ): hypandrium with a pair of long finger-like processes at posterior end that meet and unite with base of epiphallus; praegonite and postgonite present, the latter long, incurved and bifurcate at mid-length; phallapodeme large, at mid-length joined to hypandrium by a small bridge; phallus long, tube-like, simple, juxta large, without spinules, with a pair of plate-like processes flanking it at mid-length. 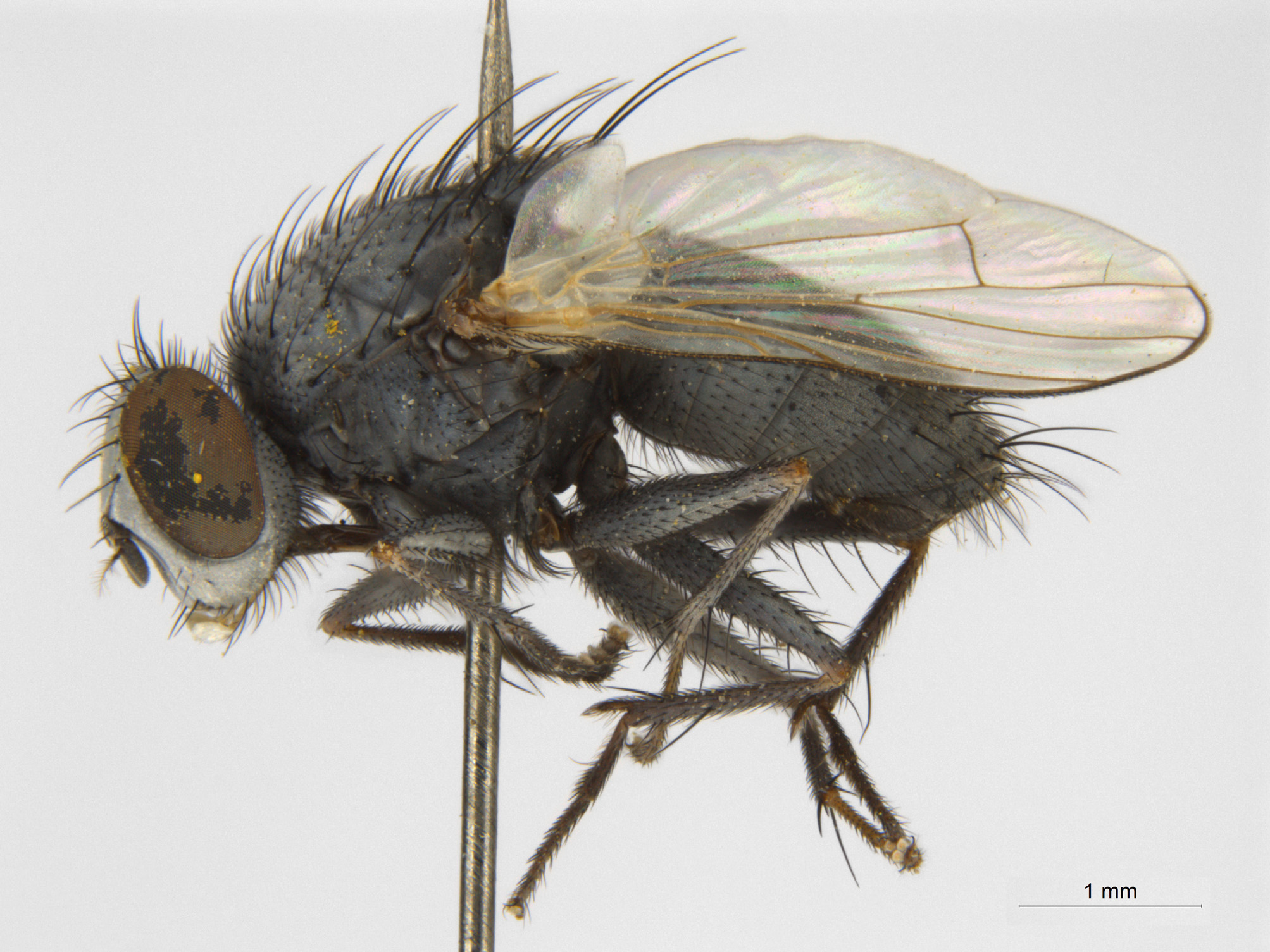 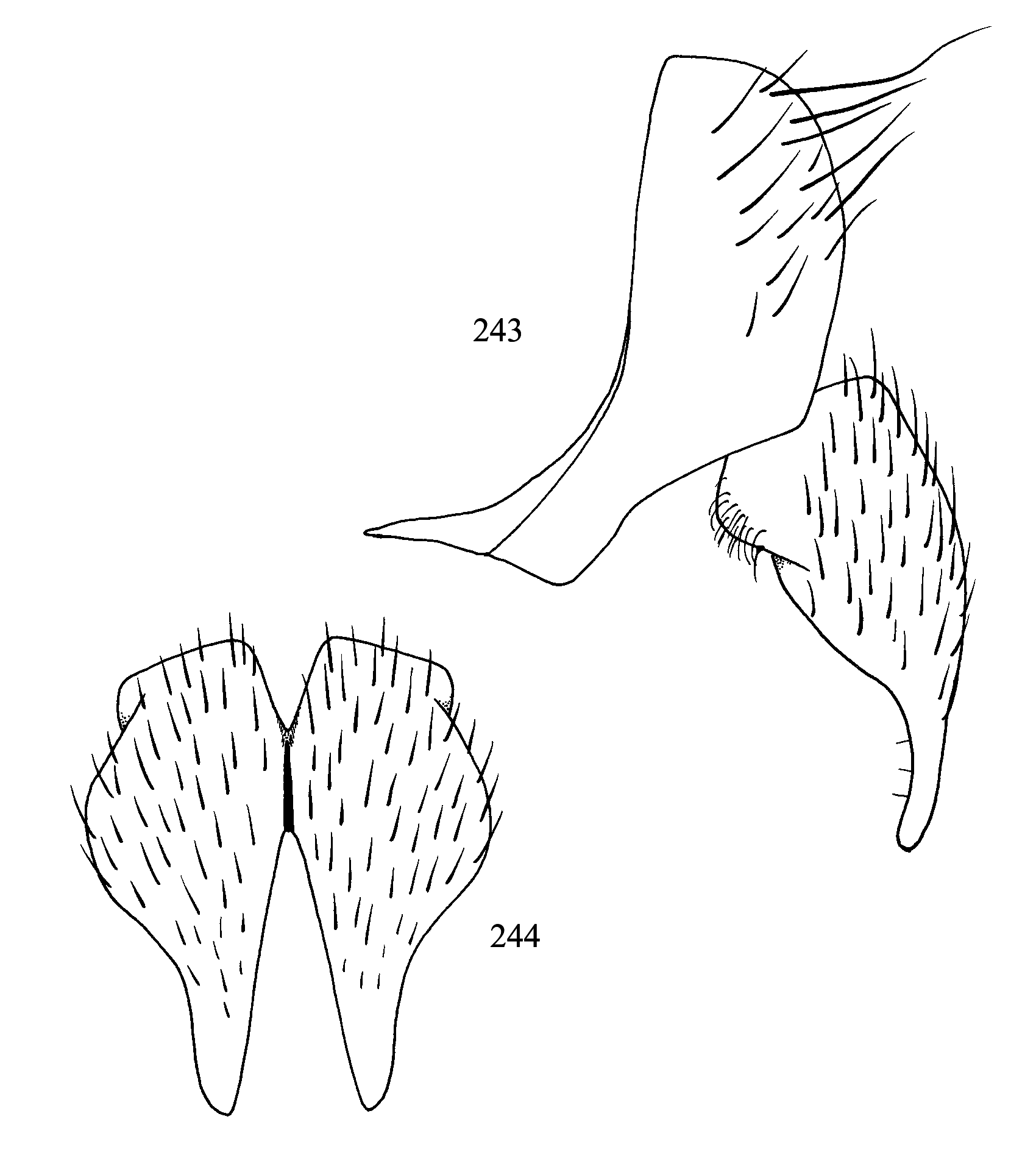 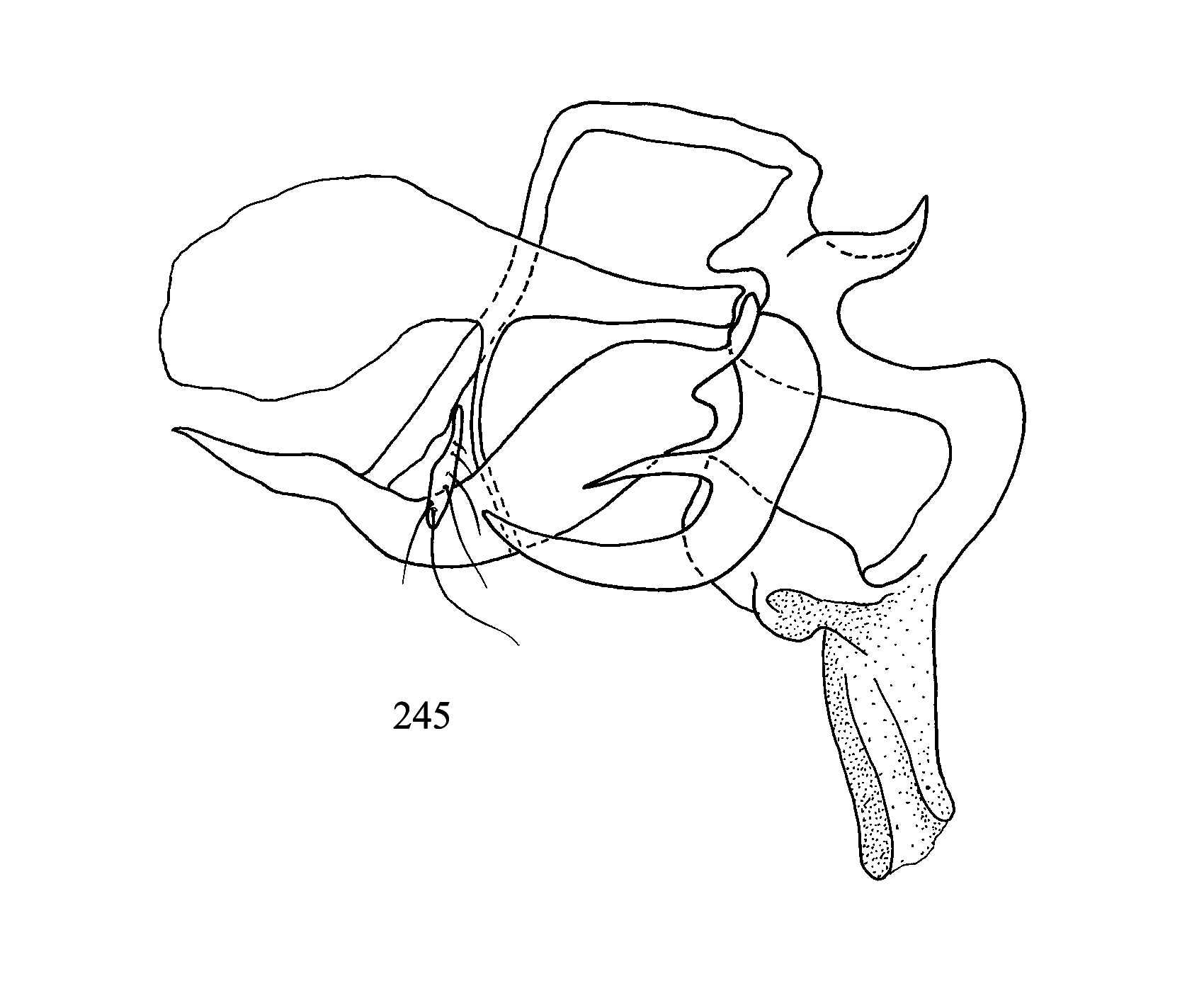 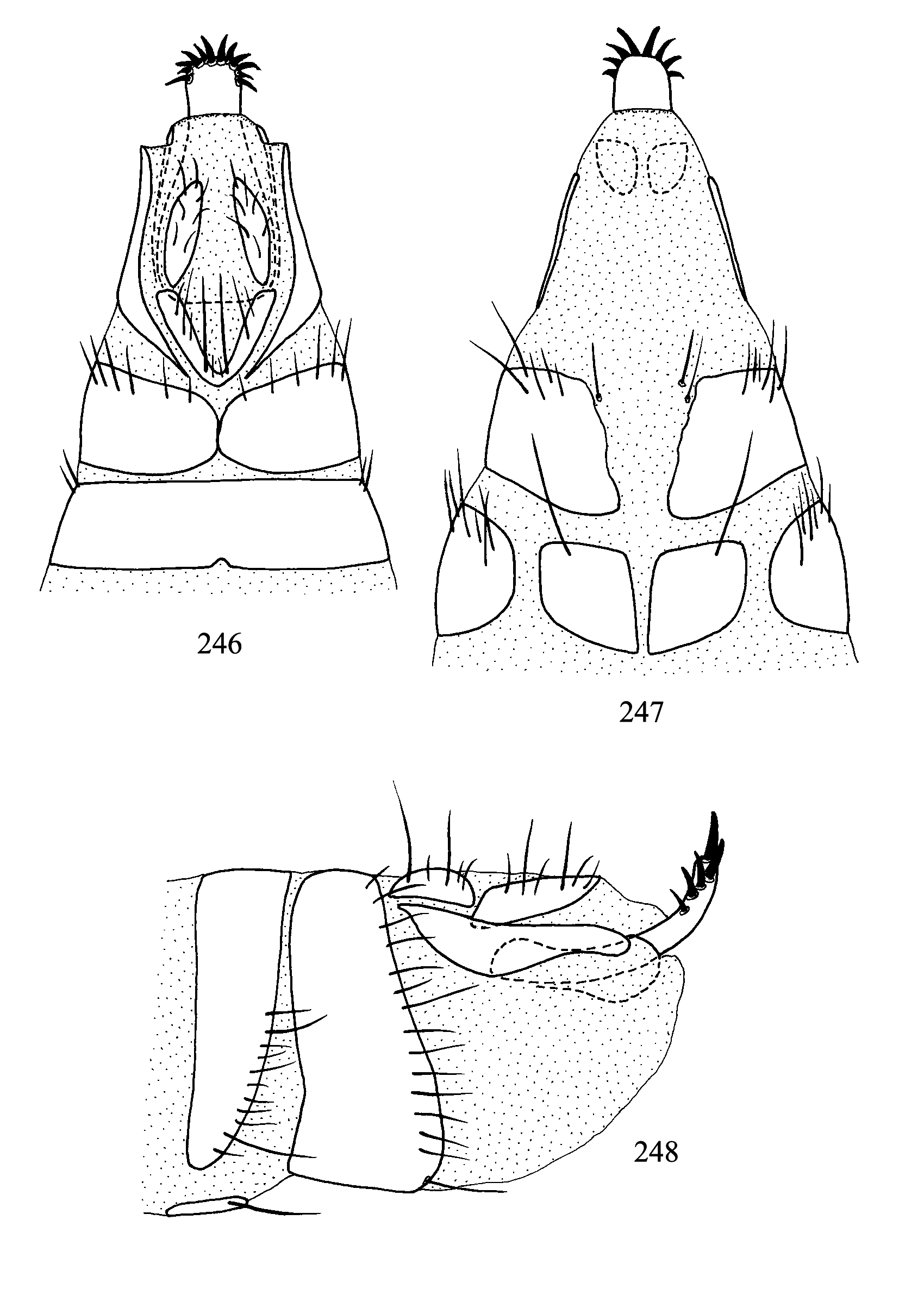