Most phylogenetic information available on Phymaturus species has commonly been provided in studies focusing on other lizard clades (often Liolaemus ), in which a limited number of taxa belonging to this genus are used as outgroups (e.g. Schulte et al. 2000; Valladares et al. 2002; Díaz & Lobo 2006; Pincheira-Donoso et al. 2007a). The first phylogenetic hypothesis to include a proportionally large number of Phymaturus species was recently developed by Espinoza et al. (2004). In a comparative analysis exploring the evolution of trophic niche in Liolaemidae lizards, these authors reconstructed, on the basis of both morphological and molecular data, the phylogenetic relationships between seven Phymaturus taxa (when only 12 of the current 19 species were recognized; see below). A major achievement of Espinoza et al. ’s (2004) results was that they provided the first support to the hypothesis that these robust lizards are grouped into two main clades ( Fig. 5 View FIGURE 5 ), one primarily austral and Patagonian ( patagonicus clade) and one essentially boreal and Andean ( flagellifer clade = palluma clade; see Etheridge & Savage 2003 and Cei & Scolaro 2006, for nomenclatural details) as had previously been proposed by Etheridge (1995; see also Cei & Castro 1973; Cei 1986).

More recently, Lobo & Quinteros (2005b) presented the only known explicit study focused on the phylogenetic relationships within the genus Phymaturus ( Fig. 5 View FIGURE 5 ). Lobo & Quinteros’s (2005b) phylogenetic hypothesis, entirely based on morphological data, incorporated the analysis of 15 Phymaturus species , when a total of 17 were known (in the same work, these authors provided the description of four new taxa; see below for details). Only P. calcogaster ( Scolaro & Cei 2003) , P. verdugo ( Cei & Videla 2003b) and P. vociferator ( Pincheira-Donoso 2004a) were excluded from that study (although P. dorsimaculatus – included in that study – and P. vociferator appear to be conspecific; see below). Even though Lobo & Quinteros’s (2005b) phylogeny differs importantly in some aspects from Espinoza et al. ’s (2004) tree ( Fig. 5 View FIGURE 5 ), it also supported substantially the hypothesis of two major clades forming the genus Phymaturus . In both phylogenetic hypotheses, the same Patagonian and Andean groups previously mentioned were found as independent evolutionary lines, consisting of the same subset of species ( Espinoza et al. 2004; Lobo & Quinteros 2005b; Fig. 4 View FIGURE 4 ).

These recent attempts to clarify the phylogenetic relationships among Phymaturus species represent substantial progress for future phylogenetic-based systematic and evolutionary research (e.g. see Wiens 2004, for details on the value of morphological based phylogenies). Nevertheless, it is also worth noting that further studies are still needed to provide additional evidence on this matter. Indeed, different authors have recognized some of the limitations that morphological-based phylogenies may imply ( Pimentel & Riggins 1987; Campbell & Frost 1993; Thiele 1993; Pleijel 1995; Wiens 1995, 1998, 2001; Strong & Lipscomb 1999; Scotland et al. 2003). For example, whereas delimitation and definition of morphological character states are difficult and sometimes arbitrary, this is not a problem for molecular variables, whose delimitation and definition is practically automatic ( Wiens 2001). Consequently, the elaboration of Phymaturus phylogenetic hypotheses based on molecular dataset are desirable.

In this work, we recognize within the Liolaemidae family the main clades and groups detailed in figs. 2, 3, 4 and 5, and as follows 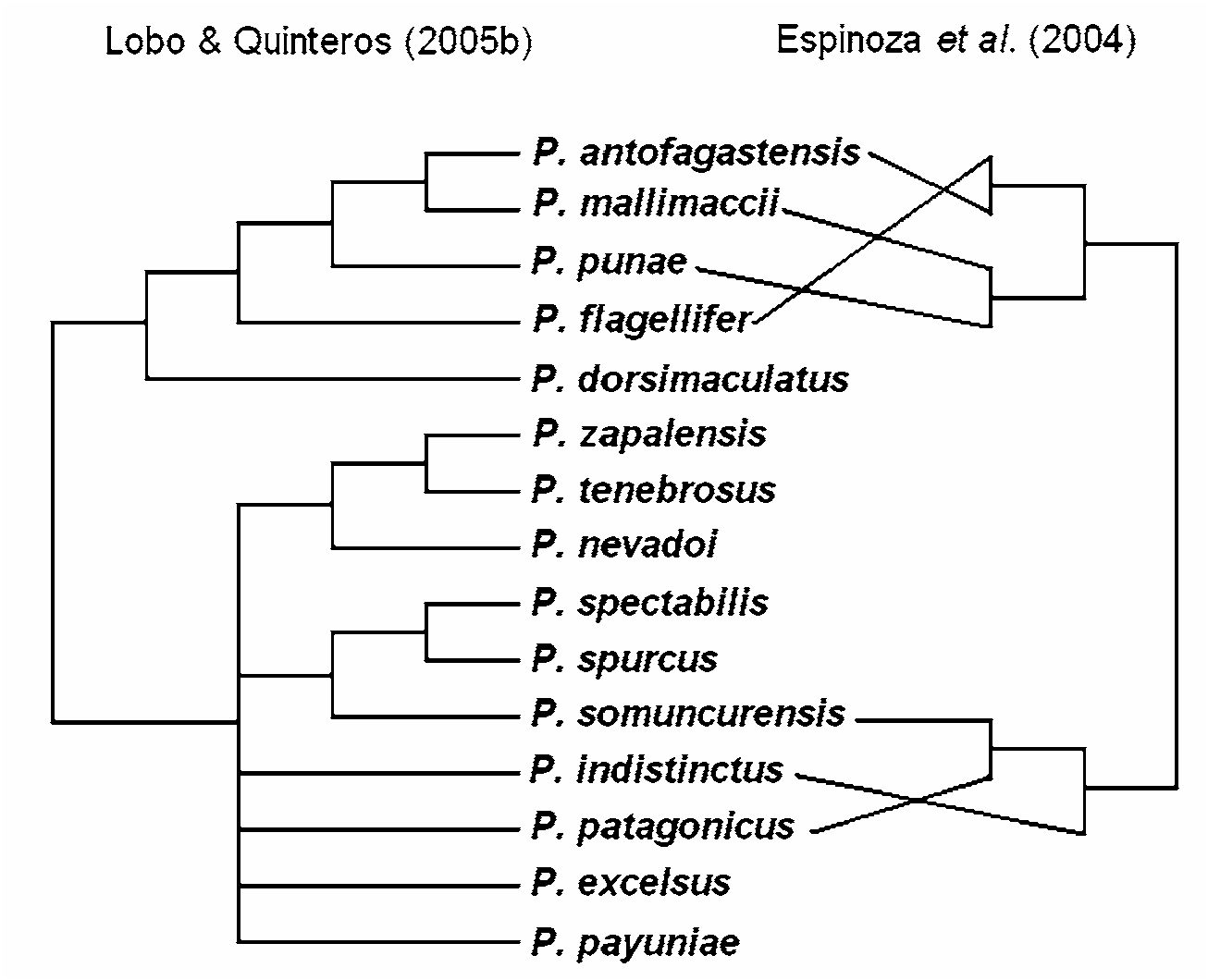 FIGURE 5. Phylogenetic relationships between the species of the genus Phymaturus. Note contrasts between the structure of the phylogenetic hypotheses proposed by Lobo & Quinteros (2005b) and Espinoza et al. (2004). Although we consider that P. dorsimaculatus is a synonym of P. vociferator, the figure shows the nomenclature used in the original work (Lobo & Quinteros 2005).

FIGURE 5. Phylogenetic relationships between the species of the genus Phymaturus. Note contrasts between the structure of the phylogenetic hypotheses proposed by Lobo & Quinteros (2005b) and Espinoza et al. (2004). Although we consider that P. dorsimaculatus is a synonym of P. vociferator, the figure shows the nomenclature used in the original work (Lobo & Quinteros 2005).