As a determination of species encompassed within this assortment of specimens from the eastern Pacific has not yet been established/confirmed, information regarding type locality and identification of any type specimens must await further study.

The Latin fili - = “thread;” and form -, the Latin for "form or shape;" could refer to the slender thread- or wire-like nature of the branches; this branch pattern was seen consistently in all specimens examined (regardless of what species might be represented). Thus, specimens from at least one species group could potentially be named Thesea filiformis   , but could not be synonymous with Elasmogorgia filiformis   Wright & Studer, 1889. For T. variabilis   , variability is implied, but whether that is in regards to such characters as colony form, branch thickness or sclerite appearance, the description given by Bayer (1958) is not clear; he does, however, indicate that the colonies he examined displayed variety of color.

For this assemblage of specimens, from the northern Channel Islands, California, south to Baja, California, based on location data (see Appendix 3: List of material examined). NMNH has T. filiformis   in their collection; those specimens were examined and they indeed belong in the genus Thesea   (for example, USNM 30295, from San Diego, Point Loma, resembles those in SBMNH collection). It has been determined that many specimens collected by both LASD and OCSD are similar to those in SBMNH collection. NMNH has several other specimens ( USNM 57172, Baja, CA; 57173 Baja, CA and 57525, from California, Point Loma) that also resembled those in SBMNH collection, or those collected by both LASD and OCSD. As to T. variabilis   , the two specimens examined at NMNH ( USNM 50633 and 50634) were both collected from La Jolla Canyon, San Diego County, CA.

Found on sand/soft mud bottoms to depths of at least 30 m, based on collection data for many specimens in SBMNH collection. Branches of these colonies can be found with any number of other organisms growing on, or associated with, them. On specimens examined, both wet and dry, were found: 1) round, gall-like growths formed by a species of acorn barnacle (protruding out through the coenenchyme, 2) presence of a Lepas   -like barnacle (found primarily on bare, exposed axis, rather than on strands with coenenchyme intact; one specimen with a note: " Scalpellum   ," where barnacle was conspicuously affixed to strand), 3) presence of ovulid snails (genus Neosimnia   ), 4) intertwined with arms of Ophiuroidea  , 5) sometimes with other kinds of cnidarian attached at base of colony; often mixed in with species of sea pen, having the same body form (thin strand-like colonies) and 6) some with what appeared to be a kind of worm (? ribbon worm) curled around the branch strands.

Muzik (1979) made the comment that "colony shape is largely environmentally, not genetically determined" in the Thesea   - Filigella   - Muricella   genera cluster. Colonies will be "large, planar, even branched . . . when on a large firm substrate, but filiform on rubble." The species group discussed here consistently grew on something other than large, firm substrates (based on consistent slender, filiform appearance of branch strands), confirmed through images provided by staff of LACSD and OCSD. Their growth and presence on a softer or rubble bottom would dictate aspects of their biology, such as materials fed upon, means of anchorage (or lack thereof), etc.

Of interest are specimens belonging to the genus Thesea   that are consistently, and regularly collected by Los Angeles and Orange County Sanitation District (LACSD and OCSD) staff; these look very comparable to many lots of specimens housed in SBMNH collection. Both LACSD and OCSD regularly label the majority of their collected samples as " Thesea   species B;" it appeared that this is the species described here, so plentiful in the SBMNH collection. These will have a tan, light beige to dull cream coloring. Based on the number of lots housed in SBMNH collection (see Appendix 3: List of material examined), and the consistent collection records that both LACSD and OCSD report, Thesea   is very common in California waters. Also of interest are specimens (determined as belonging to this genus), present in both SBMNH collection (in fewer numbers) and collected by LACSD and OCSD, that have a noticeably yellower color than the typical Thesea   described above. It was the range of color displayed in the SBMNH collection lots (and of those collected regularly by LACSD and OCSD) that was of more than passing interest. Nutting (1909) stated color for Elasmogorgia filiformis   from California (incorrect genus) as clear, light gray, with axis dark brown, and Nutting (1912) stated color (for same species, again incorrect genus) as rather dark brown; axis almost black (was unable to determine if these two statements by Nutting, regarding color, were for dry specimens, but likely). Multiple wet specimens examined revealed variable color in both coenenchyme and axis, without consistent color pairing, despite no real differences in appearance of sclerites (aside from color). With no apparent, clear-cut differentiation in variation of the sclerites (aside from color) in most of the arrays examined from colonies colored beige, white, or yellow, initial consideration was that all were several color morphs of the same species. At present, colonies are being treated as such; more extensive examinations currently being conducted may reveal differences that would warrant colonies of varying color being given separate taxonomic designations. Additionally, a small number of lots within the collection have far smaller, stouter (almost equal in width and length) dense sclerites; these are very similar in length to the less heavily warted spindles that are seen. The possibility that these specimens need to be separated out has not been excluded, but different environmental circumstances may account for these variations.

Determination as to whether or not an actual operculum was present on calyces was (and is as yet) not clarified. Kinoshita (1909), Kükenthal (1924) and Deichmann (1936) all specifically made mention, and described arrangements of, sclerites that form the operculum in this genus. In one known species the operculum was described as being strong, each flap consisting of three spindles forming an acute-angled triangle, reinforced by others lying parallel to these, or disposed longitudinally on distal parts of tentacles. In another species, the operculum was described as being composed of three to six pairs of spindles in converging double rows. Neither pattern was clearly seen in specimens examined. Considering the accepted definition of an operculum, and those families where one is quite evident, it did not seem that in this genus there is such a structure in the correct sense of that term; it might be more accurate to speak of a collaret, or a crown and points arrangement. Neither Kinoshita (1909), Kükenthal (1924) or Deichmann (1936) provided any clear illustrations of the situations they discussed regarding an operculum. Fabricius and Alderslade (2001) speak of the family as having crown and points, with no mention of an operculum. Despite an issue of semantics, or incorrect use of the term operculum, the simple fact was that very few colonies examined provided even one or a few calyces where a clear view could be had of what was covering over the tentacles. The eight tooth-like projections of the calyx margin were evident (on many), but any pattern of sclerites that might have been overlying the indrawn tentacles was another matter. The dry, often brittle nature of many of the specimens compounded the problem. With fresh material, more malleable to work with, this question could definitively be answered.

Regarding the species T.   [non Elasmogorgia   ] filiformis   (Nutting, 1909), Nutting reported a specimen taken from off San Pedro, California coast, in the University of California collection, as well as one described in Nutting (1909), from ‘Albatross’ station 4349, Point Loma light-house, NE 6.5 miles, 136-244 m (unable to locate them, thus these specimens could not be examined). He also reported specimens taken in the Dutch East Indies at 112 meters, and the specimen described in Nutting (1912) was taken from ‘Albatross’ station 4837, Tateisha Zaki Light, S 53 E 8 miles, 104 m. These latter two may not be the same species as the other two mentioned.

Regarding Thesea variabilis   , there are no apparent specimens of the species in the SBMNH collection (see Appendix 3: List of material examined). Based on collection data for the specimens at NMNH ( USNM 50633 & USNM 50634, from La Jolla Canyon, San Diego), this species required inclusion here but was unable to determine if these specimens are this species or actually a morph of T.   [non Elasmogorgia   ) filiformis   . Commonly called the White gorgonian, " Thesea variabilis   resembles very narrowly by its exterior aspect some of the Thesea 's   of the 'American Indies’ " ( Bayer 1958). Drawings of sclerites from Thesea guadalupensis   that Bayer (1958) provided for comparison with T. variabilis   showed that the resemblance is more than superficial. The only real difference seen was that the sclerites of T. variabilis   were smaller than those of T. guadalupensis   (and of roughly the same size as those seen in T.   [non E.   ] filiformis   ). "The sclerites are in limited accord, as are the external characters. Thus, there is no doubt that the eastern Pacific species belongs to the genus Thesea   , a genus that was formerly thought to be restricted to the 'American Indies.' " While noted on a list found in SBMNH files, indicating California sites and depth ranges (40-46 m, in the La Jolla area, only), there is no certainty that other coastal areas of California (even just southern California), would be an actual locality for this species. In Bayer’s personal SEM files, images were found for Thesea variabilis   Studer = Psammogorgia variabilis   . These did not fully resolve identification issues but does lead to further consideration of this species belonging to the genus Psammogorgia   rather than the genus Thesea   . Found at depths greater than 100 ft [~33 m], on the two specimens Bayer examined (1958), barnacles that were present formed prominent cysts on the branches.

Overall branching pattern described puts T. variabilis   at odds with the colony form commonly seen and named as Thesea   spp. in southern California, where branches simply appear as long thin strands, often with no apparent base, both ends of each strand/branch frequently terminating in a flattened, arrowhead shape. From images sent by LACSD and OCSD, many have an attachment to the substrate simply by being partially buried in the soft bottom sand or mud. USNM 50633 and USNM 50634 appeared more as a flattened bush, with indication of an actual base structure, and had branches of a thicker diameter, with a slightly more yellow coloration. They did not appear as the many colonies in the SBMNH collection, but their sclerites were very comparable. Thus, there might be the possibility that T. variabilis   and T.   [non E.   ] filiformis   are the same, with variable colony form (attached forms, with actual base structure, more extensively branched, even almost as a fan, while those with no attachment base more thread-like); perhaps this is a case of different living conditions dictated by the surrounding environment resulting in different colony morphologies.

Generally, this multiple-lot assemblage is composed of specimens that are best described as a conglomerate of what could be called Thesea filiformis   (with few possible morphs) or is composed of a few different species. Based on location data for all, T. filiformis   for all may be the better choice; further studies will need to be done, but there is no doubt that the genus Thesea   is commonly encountered in southern California waters.

Figure 28. Thesea, spp., SBMNH 422414. A Colony 23 cm from base attachment point on rock to tip (attachment was very tenuous; rock now separated from colony) B Closer view of branches, branch tip and pattern of calyces on branch surface.

Figure 28. Thesea, spp., SBMNH 422414. A Colony 23 cm from base attachment point on rock to tip (attachment was very tenuous; rock now separated from colony) B Closer view of branches, branch tip and pattern of calyces on branch surface. 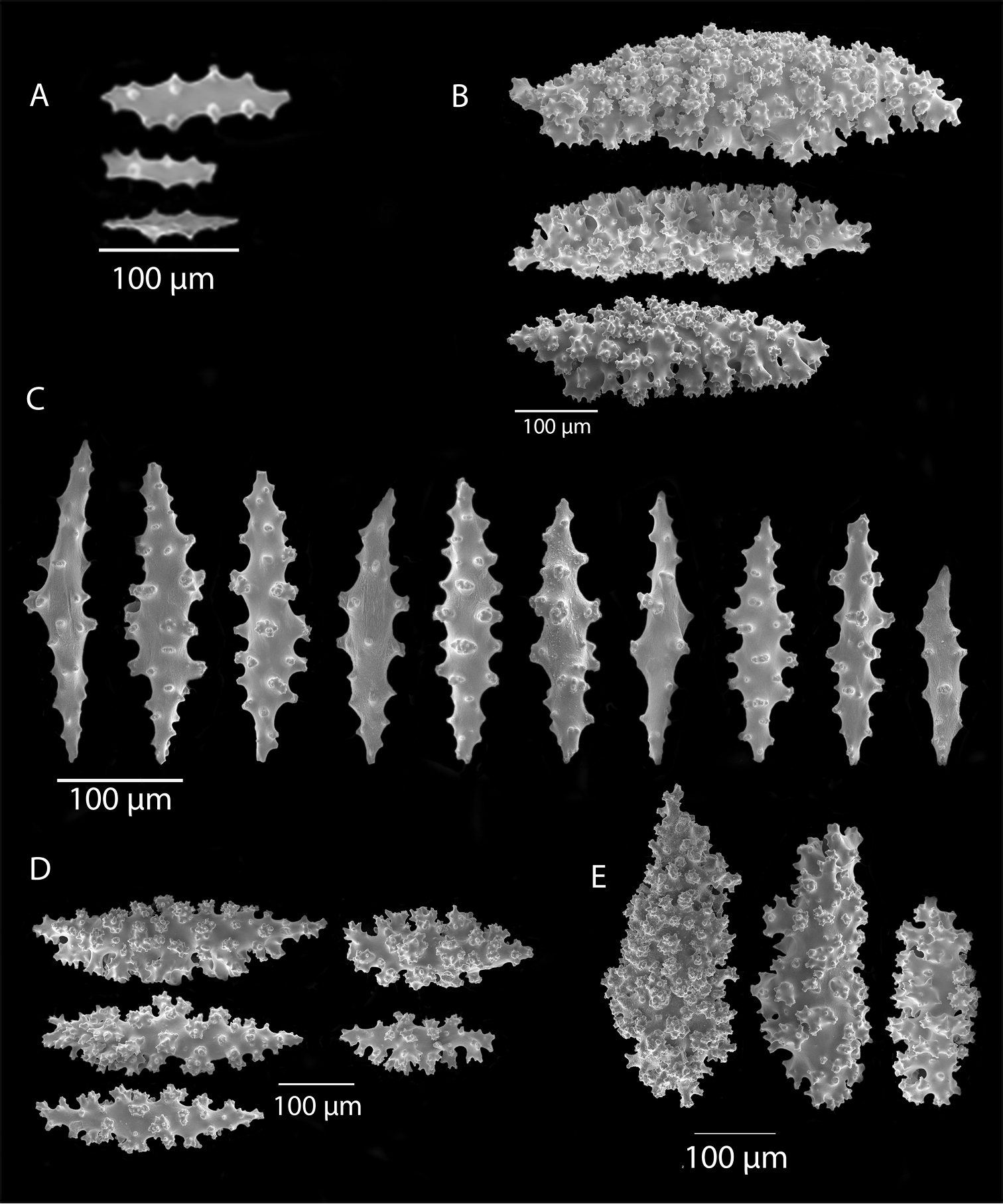 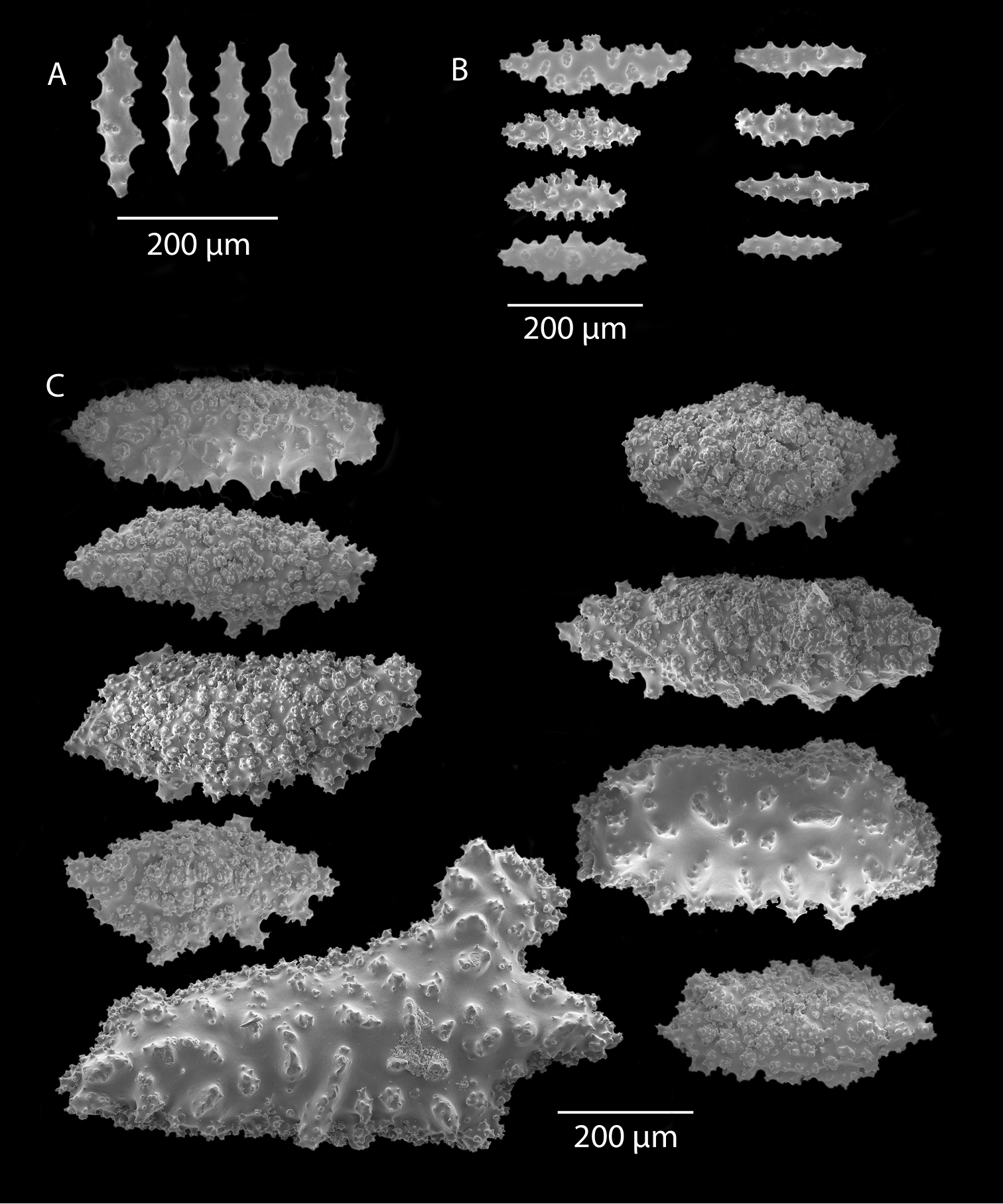