Description. Massive lobate cormus ( Fig. 41a View FIGURE 41 ), consisting of densely and tightly anastomosed tubuli, with oscules on top of the lobes leading to atrial spaces. Color pink in situ. Preserved material consists of two fragments, each 2 x 2 x 1 cm of the much larger specimen, estimated to be 6 x 4 x 2 cm, most of which was used for natural products research. The preserved fragments are white or cream colored ( Fig. 41b View FIGURE 41 ) and comprise several contracted lobes.

Etymology. Named after Dr Michael Schleyer, Oceanographic Research Institute, Durban, South Africa, who collected the material, and in recognition of his important work on the marine ecology of South Africa.

Remarks. Although we do not have molecular sequence data for this specimen, the overall similarity of the present material with Leucascus , reviewed by Cavalcanti et al. (2003), makes it likely that the present new species is also a member of that genus. Our SEM cross sections ( Figs 41c–d View FIGURE 41 ) show the characteristic structure of short atrial cavities surrounded by tightly anastomosed tubuli, with the whole cormus covered with a cortex of erect short diactines. Of the described species of Leucascus , only South Australian L. clavatus Dendy, 1892 possesses diactines, but these are much larger and thicker (350–850 x 99 –140 µm) than those of the new species, while also the tri- and tetractines are significantly larger (actines 70–160 x 9–19 µm).

Borojević (1967) reported Ascaltis reticulum ( Schmidt, 1862) (as Clathrina ) from South Africa, from both the Indian Ocean coast (‘Natal shore’) and from the Atlantic coast (False Bay). He gave a general description for these specimens, which fits our material except for the diactines, which measured 100–200 x 15–20 µm, well in excess of our diactines. No mention was made of spines on the apical actines of the tetractines. A. reticulum is originally described from the Mediterranean ( Schmidt, 1862). It is possible that at least the Natal specimens could be conspecific with our specimen rather than with A. reticulum . Klautau et al. (2016) redescribed Adriatic Ascaltis reticulum ( Schmidt, 1862) and provided molecular sequence data. The spicule types and sizes described by Klautau et al. conform rather closely to those cited above for our specimen, except for the diactines which were longer and thinner (60–142 x 4–6 µm) and not eroded. Of course, Ascaltis differs from Leucascus in lacking a lined atrial cavity ( Borojević et al. 2002a), and generally is less elaborate in shape and structure. Molecular sequence data of Ascaltis reticulum provided by Klautau et al. (2016), and downloaded from GenBank were found to group at a rather low bootstrap value with sequences of the Indonesian Leucascus flavus described by us previously (Van Soest & De Voogd, 2015) in our Calcinea phylogeny ( Fig. 2C View FIGURE 2 ). This would confirm a close relationship of Ascaltis and Leucascus as postulated by Borojević et al. (2002a). Nevertheless, there are no molecular sequence data available for the type species of Ascaltis , A. lamarcki ( Haeckel, 1872) , so the true affiliation of Leucascus and Ascaltis remains uncertain.

Dendy’s (1913) Leucosolenia gardineri from the Western Indian Ocean on paper looks close to the present new species, the major obvious difference appearing to be the lack of banana-shaped diactines in L. gardineri . The species is currently assigned to Ascaltis .

Novel natural products, clathculins A and B, have been described from this specimen by Rudi et al. 2000. 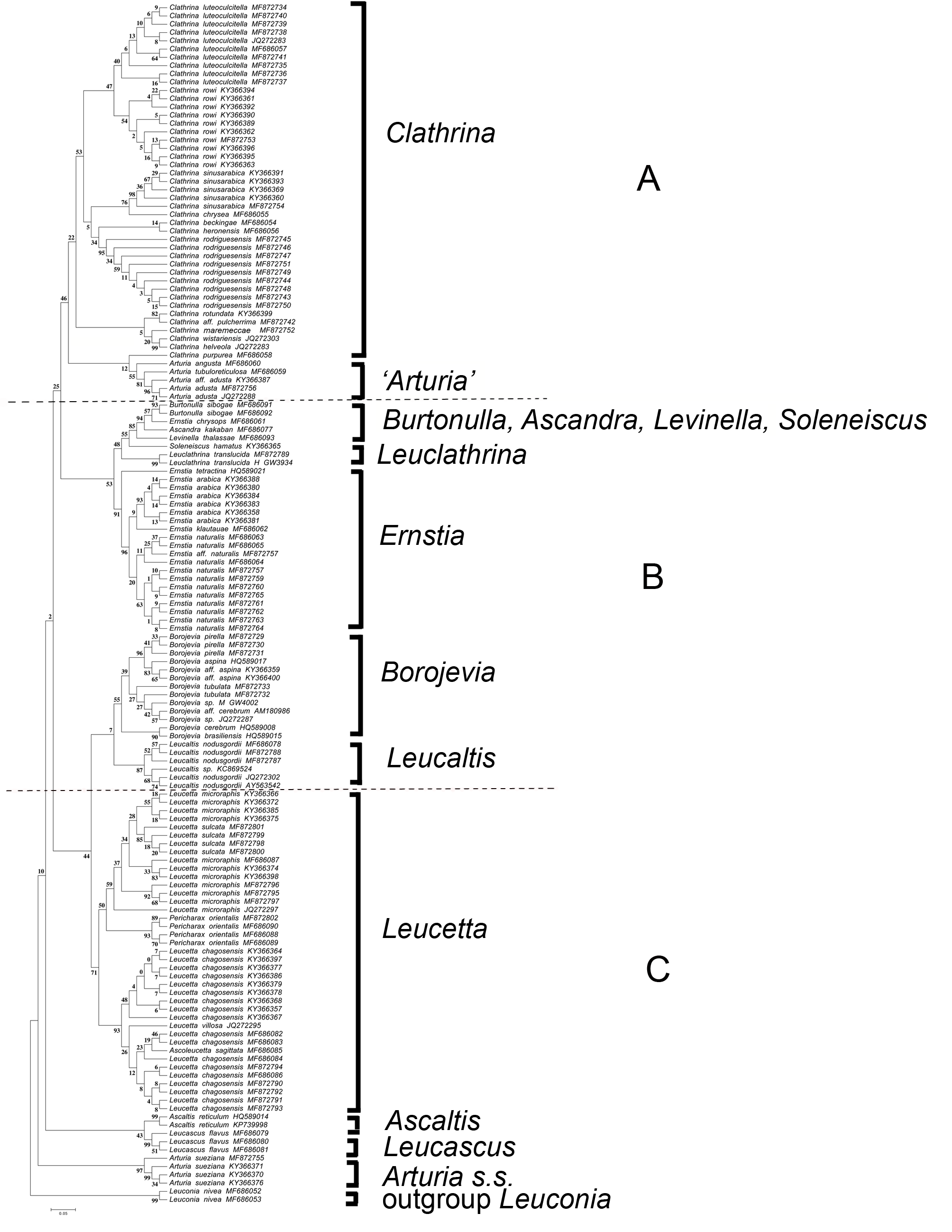 FIGURE 2. Maximum-likelihood tree based on analysis of sequences of the partial 28S gene (C2–D2 region, comprising 442 sites) of Western Indian Ocean Calcinea newly generated by the Naturalis Biodiversity Center and sequences additionally obtained from GenBank, the Sponge Barcode Project and from Oliver Voigt (München) from the Red Sea, Indonesia, Australia, and a few sequences from other parts of the world, to demonstrate the affiliation of the compared species. Please note that Arturia sequences do not appear in the same clade, indicating Arturia is non-monophyletic. Numbers at the root of clades are bootstrap values of 1000 replicates. Since the high number of sequences were difficult to read in detail, we subdivided the present tree in three detailed sections 2A, 2B, and 2C. 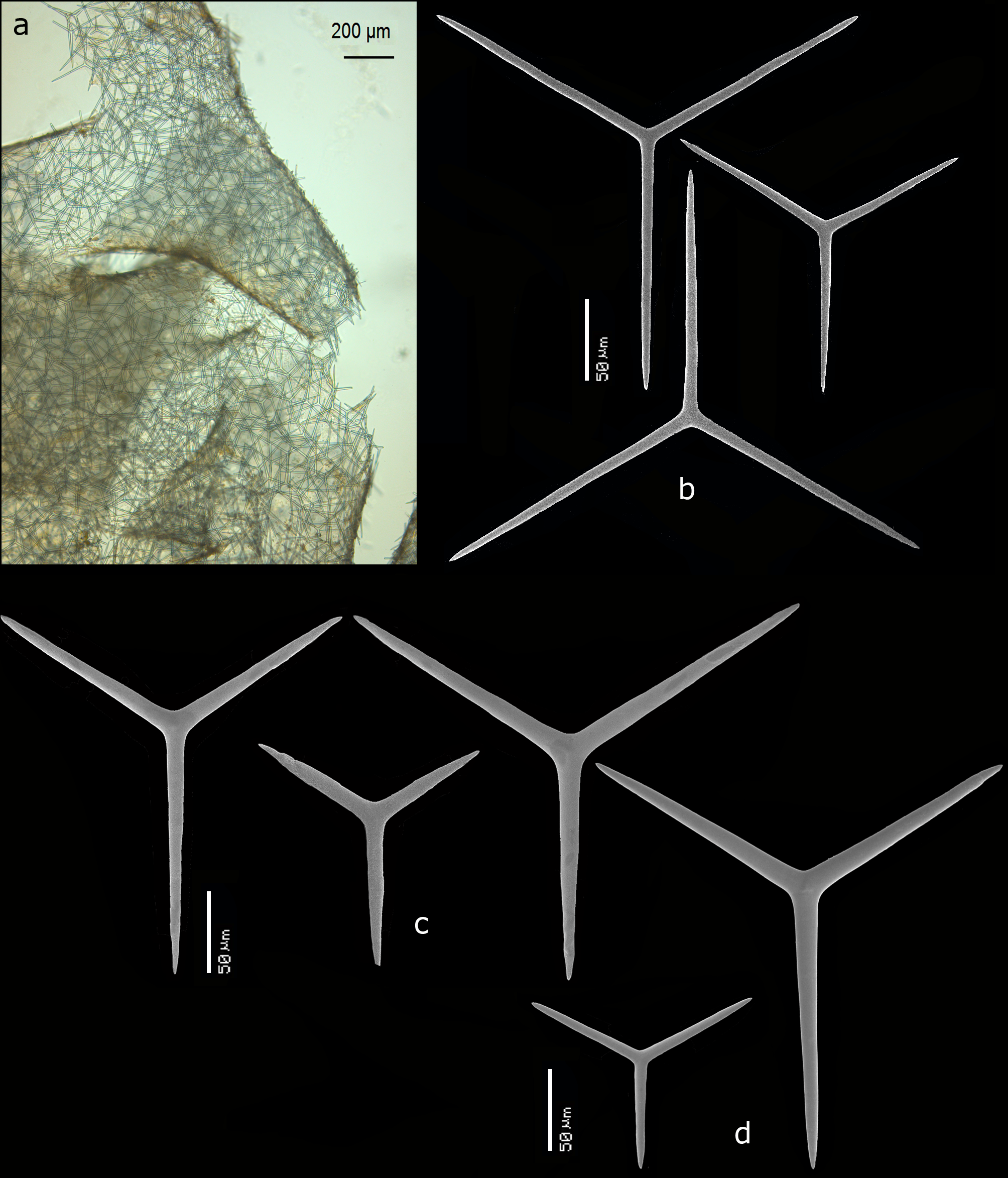