Type material examined. Holotype: adult female, SINGAPORE: on Macaranga hypotema   [sic, see below], E.E. Green letter dated 8.vi.1916, coll. I.H. Burkill, 1(2, holotype clearly marked and 1 paratype adult female) ( USNM)   . Paratypes: same data as holotype but two slides specify "in hollow stems of M. hypotema   ", 4(4 adult females, including 1 on slide with holotype, + 2 slides with a number of first-instar nymphs) ( USNM; the 1 slide with 3 paratype females not seen). Morrison's original description refers to five adult females and several mounted "larvae", and this accords with the slides listed above, all of which have Morrison type labels on both the slides and their envelopes. However there is another USNM slide of this species which appears to have been prepared and labelled by Green from original Burkill material as its label starts: "Ctenochiton / tumuliferum / Green, ms. / Part of type / material.)" (details listed immediately below), but these specimens are not mentioned by Morrison in the original description of this species   .

Examined non-type material from original collection. SINGAPORE: in hollow stems of Macaranga hypotema   [sic], coll. I.H. Burkill, 1(2 adult females + 1 third-instar female) ( USNM; slide labelled by Green and discussed above); in hollow stems of Macaranga hypoleuca   , attended by ants, coll. I.H. Burkill, 2(2) ( BMNH). The BMNH also has another 10 slides, with a total of 29 adult females and nymphs, of this Singapore collection from Burkill; PJG examined these slides in 1994 and made notes but did not take measurements. All of these BMNH slides have similar data to the   type collection listed above, but they are not type specimens, as explained in the Materials and methods.

Adult female. Unmounted material. “.. rarely broad oval, but usually broadened behind and triangular with angles rounded; plane of dorsal surface flat, but in dried specimens covered with relatively large knobs having a fairly definite arrangement of a median longitudinal single row and on each side of this two other rows, the outer one forming a continuous row around the body at the margin; dorsally covered with a thin, brittle, whitish but more or less translucent, glassy secretion, very easily broken and usually more or less wanting, molded into elevations and depressions corresponding to those of the body, this covering normally wanting over the flattened extreme margin of the body; body color dull brown, of secretionary covering, as stated, translucent whitish; .. ( Morrison 1921: 655). For the present revision, the available adult females preserved in ethanol were pinkish red in colour ( Fig. 11D View FIGURE 11 ). Although Morrison recorded the body of dry adult females as dull brown, but this is unlikely to reflect the colour in life.

Margin. Eyespots present slightly removed from dorsal margin, each 20–28 µm in maximum dimension. Marginal setae (mset) of 2 broad types usually not found together on a specimen (but female SPQ.030 with both types): (1) long (20–110 µm) and flagellate, present in 1 or 2 rows (rarely up to 3 rows on part of margin) (as illustrated in Fig. 14 View FIGURE 14 ); (2) short (12–28 µm long) and with apices mostly fimbriate (or at least divided), usually present in a single row, rarely in 2 rows on parts of margin; with about 7–30 marginal setae between anterior and posterior stigmatic areas on each side of body. Stigmatic setae (stgset) of variable length and development, numbering 1–3 but usually 1 (rarely absent) per cleft, median seta 3–25 µm long, lateral ones if present each 3.0– 7.5 µm long, spinose and tapering to a rounded point, rarely 3 very short setae (≤ 5 µm) present.

Heckroth et al. (1998) recognised C. tumuliferus   from both Borneo and Peninsular Malaysia and recorded it as most common on M. hypoleuca   , which is a common and widespread tree in both regions (Davies 2001). We had available for study 16 slide preparations, each containing from one to six adult females, made by Heckroth and identified by him as C. tumuliferus   from Borneo. Five slides (#445, 447, 450, 451 and 453, ex M. hypoleuca, Santubong   [probably on the lower slopes of Mt Santubong], Sarawak) have adult females of C. tumuliferus   , but the other 11 slides (#495, 525, 526, 527, 581, 589, 598, 629, 631, 635 and 614, ex either M. bancana   , M. hypoleuca   , M. indistincta   , M. beccariana   or M. pearsonii   , from three areas in Sabah) contain specimens of C. pseudotumuliferus   . Other than the specimens from Santubong, all other records for C. tumuliferus   are from Singapore and Peninsular Malaysia and, given that it is unlikely that Heckroth's specimens of C. tumuliferus   are mislabelled, the explanation for this distribution is probably geographic. Santubong is in the region of Sarawak closest to Singapore and West Malaysia and may have been isolated from the rest of Sarawak by past geological and environmental conditions. The Kuching area (including Mt Santubong) of western Sarawak is south of the Lupar Valley and a geological fault called the Lupar Line. This fault marks the southwestern boundary of the rock formation called the Rajang Group in Sarawak ( Moss 1998; Wang et al. 2016). The Lupar Valley contains a large river, the Batang Lupar, surrounded by extensive swamp forests, which may have created a barrier to the dispersal of some taxa. A barrier effect of the Lupar Valley has been hypothesised for a species of Malaysian frog for which populations from Peninsular Malaysia and western Sarawak were more genetically similar than populations in western Sarawak were to those in northeastern Sarawak ( Zainudin et al. 2010).

The adult females of C. tumuliferus   from Santubong have 7–9 dorsal submarginal humps on each side of the body and of the typical shape for C. tumuliferus   ; 12–16 dorsal anal plate setae on the six females for which they are visible clearly; flagellate marginal setae up to 90 µm long (but usually <60 µm) in 1 or 2 rows; 1–4 stigmatic setae per cleft with each seta usually 10–25 (rarely up to 36) µm long; and an apical antennal prolongation 5–8 µm long (rarely 10 µm long on one antenna of a pair); thus these females barely differ in key morphological features from females collected from Singapore and Peninsular Malaysia. Further collecting and molecular assessment of C. tumuliferus   from the Kuching region (i.e., south of the Lupar Line) would be valuable. Furthermore, C. tumuliferus   may occur in the northwestern part of West Kalimantan but no collections have been made in that region. 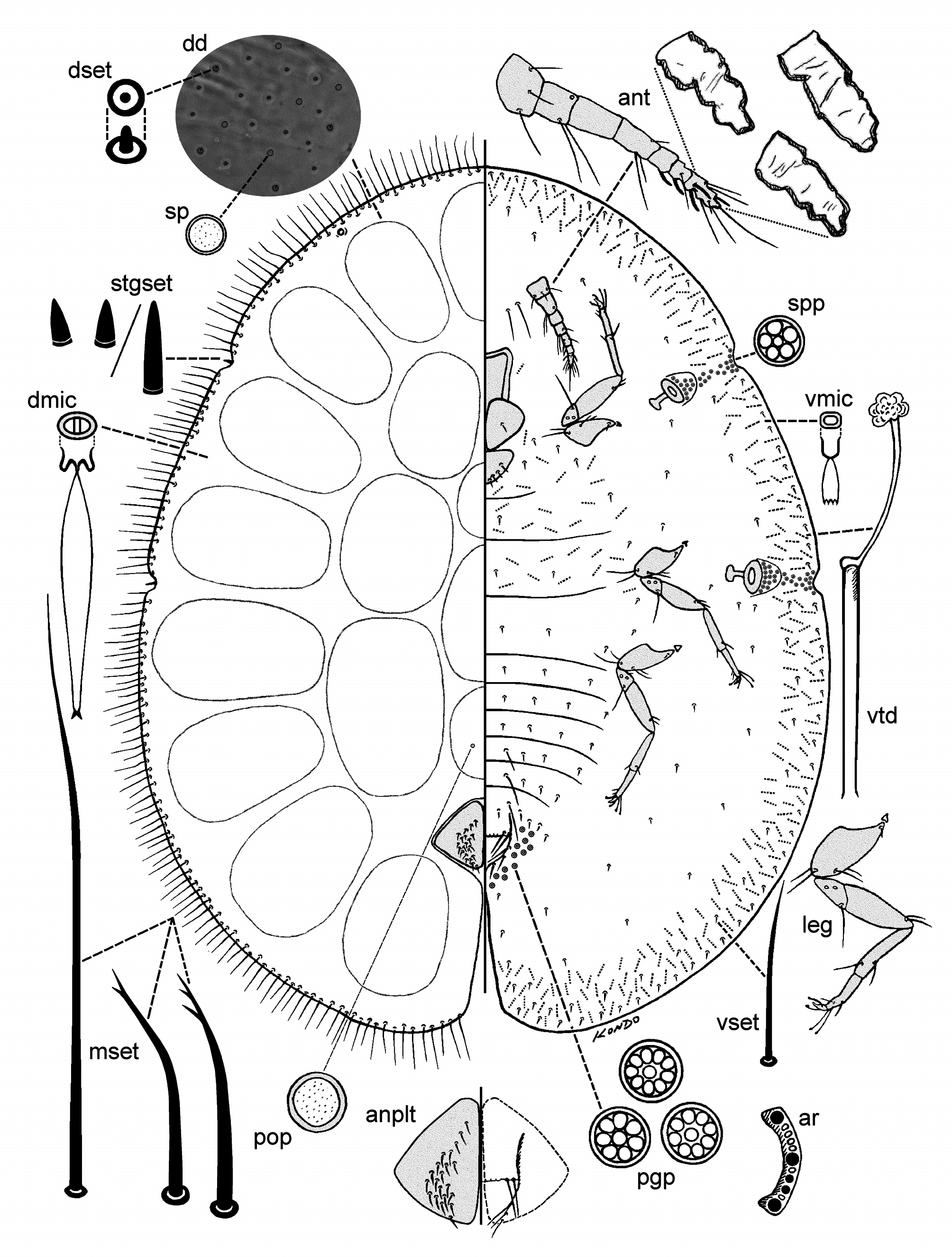