Etymology. The species epithet was given on the basis of the geographical location where the species was encountered for the first time.

Type material. The holotype and 8 paratypes were fixed in formalin and deposited in the collection of the Museum of Natural History in Geneva, Switzerland under accession numbers MHNG-INVE- 89244 (holotype) and MHNG-INVE- 89245, MHNG-INVE- 89246 (paratypes). All specimens were collected from the same sampling locality (see ‘Materials and Methods’ for details).

Diagnosis. As for genus; this particular species has the ability of attachment to flat surfaces and significant test shape plasticity.

Test morphology. Test monothalamous, flexible in shape and able to change its life mode from free to attached one. Free forms are subspherical, oval, or kidney-shaped in outline; their maximal cross-sectional test diameter varies from 165 to 405 µm (n= 17), with the widest portion of the test located approximately at mid-level. Free forms with irregularly shaped tests (e.g. with a completely distorted proximal end or large swellings) also occur. The holotype has a subspherical, slightly elongated test, which was free (unattached) at the moment of collection. Aperture roughly circular, oval or irregularly shaped, located terminally, surrounded by a low agglutinated collar, which is sometimes slightly flared. Underlying organic layer is visible, sometimes projecting forward from the edges of the agglutinated collar and forming an inconspicuous fringe.

Attached individuals are dome-shaped; their edge outline is irregular; those who apparently spent long time on substrate, develop bordering flange around the test. Test diameter of four measured specimens varied from 450 to 1030 µm. The aperture is located on the upper surface of the dome, positioned eccentrically, otherwise looking similarly to the aperture of free individuals. The basal test wall or ‘floor’ is present or partially present; in detached specimens that seemingly did not possess the complete floor, no organic membrane was observed covering the bottom opening.

Wall structure. The test wall is whitish or greyish, opaque, composed of small mineral grains, the majority of which are translucent (presumably quartz), with occasional black grains interspersed between them. The wall of some dome-like attached individuals incorporated very large, disproportionate grains that were transparent or dark. The wall thickness is not uniform, especially in the attached specimens, with some areas (as e.g. the lateral wall parts) being considerably thicker than the basal wall. Direct measurements of the test wall thickness were not possible, as the test was not sectioned. The flexibility of the test wall suggests loose binding between the grains as well as the presence of the underlying organic layer.

Granuloreticulopodia. Once isolated and cleaned of gathered matter, the cell readily deploys extensive granuloreticulopodial network in the surrounding medium (from here on, we will use the term ‘reticulopodial’ instead). When observed on a planar surface, numerous ‘main’ branches are visible, radiating from the apertural area. Fully deployed network occupies the area around the cell, with its radius surpassing test diameter at least five times. The number and density of main strands is greater in the prevalent direction of movement, if the cell starts to relocate. Also, the proximal portions of reticulopodial strands frequently fuse into vast, flat cytoplasmic ‘veils’ with the same radial bidirectional streaming of granules within the veil, as observed in separate reticulopodial strands.

Test interior. Cytoplasm opaque, whitish or with a slight orange tinge, it was visible through the opening in the bottom of some detached dome-shaped tests.

Observations on living individuals. The active, freely moving individuals were discovered in the accumulations of phytodetritus, diatoms and filamentous algae. They invariably gathered a lot of material with vast reticulopodial networks and accumulated it around the aperture (Plate 1, fig. H). The dome-shaped F. islandica  tests were found on empty Mytilus  shell fragments, in the coarse fraction of the sample (> 500 µm); these attached individuals accumulated a lot of matter above themselves resulting in the dome completely covered and hard to reveal (Plate 1, fig. I). Numerous diatoms were frequently found associated with the lower surface of the test floor of attached forms; it was not clear, however, how they became trapped under the basal wall. Transition from the free to attached life mode was documented only once. A free, oval-shaped specimen was isolated and placed in a separate dish. Initially, it wandered on the bottom with reticulopodia extended and forming a large network, but after two weeks it became sedentary and attached itself to the plastic with the aperture turned upwards and a flat rear attachment surface, rendering a bottle-like appearance (Plate 1, fig. F).

Molecular phylogeny. Analysis of partial SSU rDNA sequence data showed that F. islandica  belongs to the Clade M of monothalamous foraminifera ( Fig. 1View FIGURE 1). Its close relative is a saccamminid from the coast of New Zealand, tentatively assigned to the species Saccammina alba Hedley (1962)  . Both species differ by only 6.2 % of sequence divergence, but their common branching is not strongly supported (36 % BV). The environmental sequence Xeno 215.5 branches between the two species. All of them belong to a strongly supported (100 % BV) subclade M 1, which also includes the genus Allogromia  , undescribed allogromiid ‘twinkle’ (GenBank Accession number EU 213245View Materials) and one environmental sequence ( EU 213225View Materials) ( Fig. 2View FIGURE 2). Other sequences branching at the base of clade M, include various environmental sequences, as well as sequences of specimens which were assigned to genera Hyperammina  and Crithionina  on the basis of their morphology ( Fig. 2View FIGURE 2). All these sequences form a morphologically heterogeneous clade M, with the terrestrial species Edaphoallogromia australica Meisterfeld et al. (2001)  at its base.

Remarks. Close relationship of F. islandica  and Saccammina alba  raises the question of the generic affinity of both species. The genus Saccammina  originally described by Sars (1868) has substantial morphological differences when compared to S. alba  of Hedley (1962) and presently described species. The type species, Saccammina sphaerica Sars  has a rigid test wall, composed of coarse sand grains ( Brady 1881, Heron-Allen & Earland 1913). Although the genetic data are not available for S. sphaerica  from the original locality in the Norwegian Sea, the sequences of a very similar morphospecies from the Weddell Sea branch within the Clade C monothalamids ( Figure 1View FIGURE 1). Because of its clearly different morphology we think that S. alba  should be moved to another genus. Yet, its placement in the genus Flexammina  might be premature as close phylogenetic relations between F. islandica  and S. alba  are not supported ( Fig. 2View FIGURE 2). On the other hand, the study of Goldstein (1988) concerned a very similar monothalamid from the coast of California, which was verified by Hedley as belonging to S. alba  . It exhibits exactly the same behavior as Flexammina islandica  , being capable of attaching itself to hard surfaces. In his original publication, Hedley does not report any radical transformations of the test shape, as well as attached individuals; however, quite strong variability of the test contour in free individuals is apparent (see Figure 2View FIGURE 2, Hedley 1962). All sequenced specimens of S. alba  from the original location were rounded and we did not observe any change of its shape, but the observation time in this case was too brief and attached specimens were possibly overlooked. Taking all the above points into consideration, we think that more genetic data is needed to unambiguously prove the congeneric status of F. islandica  and similar morphospecies from New Zealand and California. 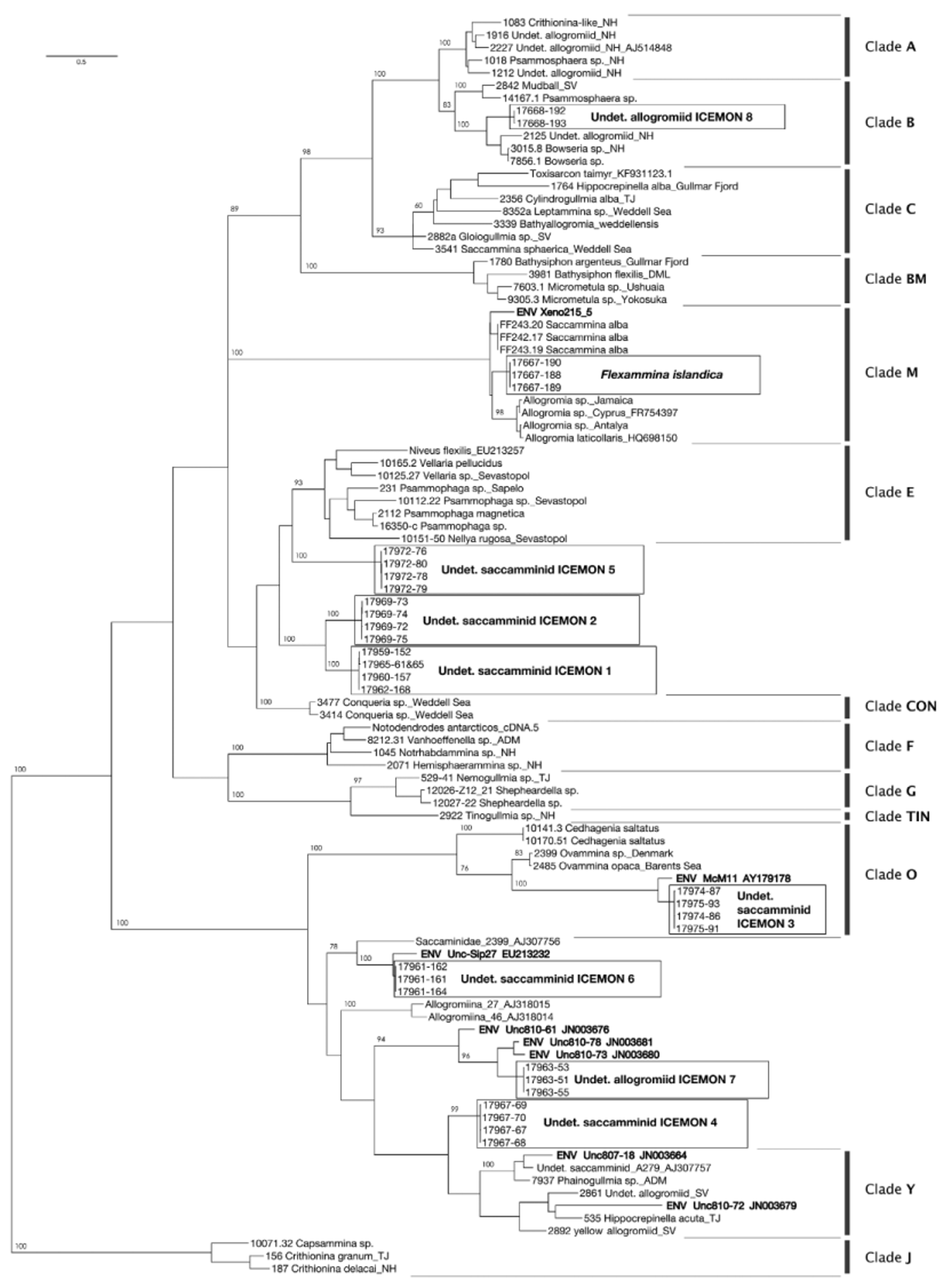 FIGURE 1. Phylogenetic tree of monothalamous foraminifera based on 3 ’ partial SSU rDNA sequences from our database and some GenBank sequences derived from environmental clone libraries (marked by the ‘ ENV’ prefix and highlighted in bold). New sequences obtained in this study are marked by frames with the names of corresponding phylotypes / species given in bold; the name of every new sequence consists of two parts separated by dashes (foraminiferal DNA collection number and clone number). Foraminiferal DNA collection numbers and GenBank accession numbers (if available) are also shown for other sequences. Major monothalamid clades are indicated in accordance with Pawlowski et al. (2002, 2011).

FIGURE 1. Phylogenetic tree of monothalamous foraminifera based on 3 ’ partial SSU rDNA sequences from our database and some GenBank sequences derived from environmental clone libraries (marked by the ‘ ENV’ prefix and highlighted in bold). New sequences obtained in this study are marked by frames with the names of corresponding phylotypes / species given in bold; the name of every new sequence consists of two parts separated by dashes (foraminiferal DNA collection number and clone number). Foraminiferal DNA collection numbers and GenBank accession numbers (if available) are also shown for other sequences. Major monothalamid clades are indicated in accordance with Pawlowski et al. (2002, 2011). 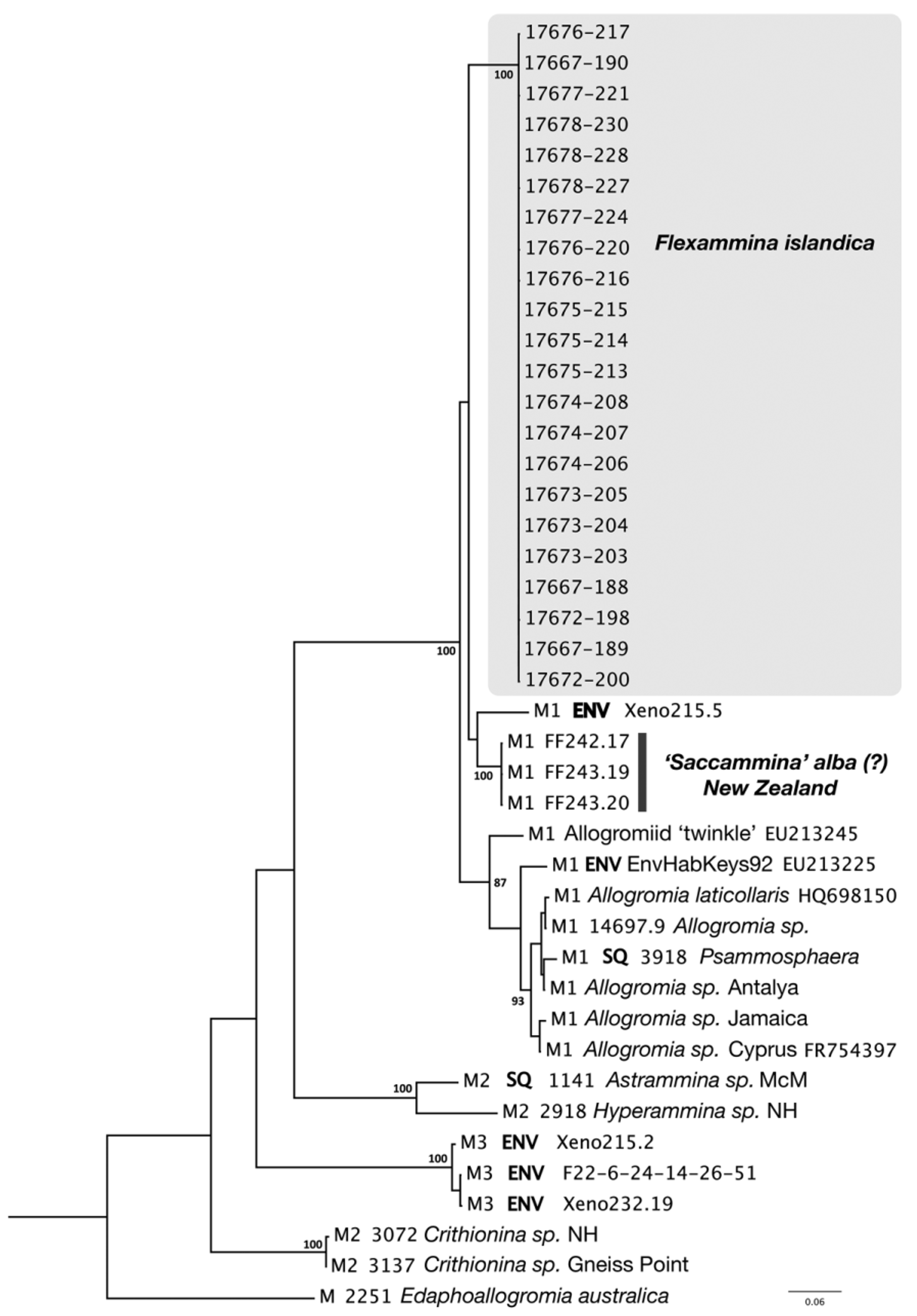