Description. Stolonal colony growing on stems of Hydrodendron arboreum   ( Fig. 9 View FIGURE 9 A –D). ‘Encrusting hydrorhiza consisting of a dense mass of branching and anastomosing tubes (fig. 6). Each tube is covered with its own very thin sheath of perisarc (fig. 33) and there is no common sheath of coenosarc covering the hydrorhiza as a whole, … In the central parts of the hydrorhiza the tubes are closely packed, anastomose freely, and are disposed in several layers. At the periphery however the tubes are reduced to a single layer, become more dispersed, and anastomose slightly’ ( Hickson & Gravely 1907: 9).

Gastrozooids ( Fig. 9 View FIGURE 9 C, 10 A), c. 1050 µm high and c. 250 µm in maximum diameter, with conical hypostome and a distal crown of eight to nine filiform tentacles [six to ten according to Hickson & Gravely (1907)]. Nematocysts concentrated on their tips.

Gonozooids shorter than gastrozooids (c. 850 µm high and c. 370 µm in maximum diameter), with short, rounded hypostome, without tentacles or just with a few tentacle buds, without gonophores (gametes developing into body wall) ( Figs 9 View FIGURE 9 A –B, D, 10 B).

‘The body of the blastostyle is usually considerably dilated and has a superficial resemblance to a simple ovoid sporosac’. ‘The medusoid structure of the gonosome is completely reduced in the male, … The sperm cells (fig. 33, sp.) are found in a dense cluster between the ectoderm and endoderm even in the youngest blastostyles we have examined (0.1 mm in length), and neither in these nor in the older blastostyles can we find any true medusoid structures.’ ( Hickson & Gravely 1907: 9)

Remarks. Although Hirohito (1988) considered the genus Rhysia   (family Rhysiidae   ) synonymous with Stylactis, Brinckmann-Voss et al. (1993)   retained both the family and the genus as valid [This is also the currently accepted view (e.g. Bouillon et al. 2006; Schuchert 2014)], arguing that the structure of the gonozooid, with gonophores reduced to mere gonads, is very different from that of representatives of the family Hydractiniidae   .

Brinckmann-Voss et al. (1993) already indicated that Rhysia fletcheri   could be distinguished from Rhysia autumnalis   and R. halecii   by morphological characters (see Table 2 in Brinckmann-Voss et al. 1993). In fact, R. fletcheri   has gastrozooids with nematocyst clusters around the hypostome and there are no dactylozooids [according to Schuchert (pers. com.), it can have tentaculozooids]. On the other hand, they indicated that R. autumnalis   and R. halecii   were largely distinguished by meristic characters, that both species were widely separated zoogeographically, and that they occur under quite dissimilar environmental conditions.

Ecology and distribution. Rhysia halecii   is only known from McMurdo Bay, in the Ross Sea, where it was collected at 36 m, in February ( Hickson & Gravely 1907). 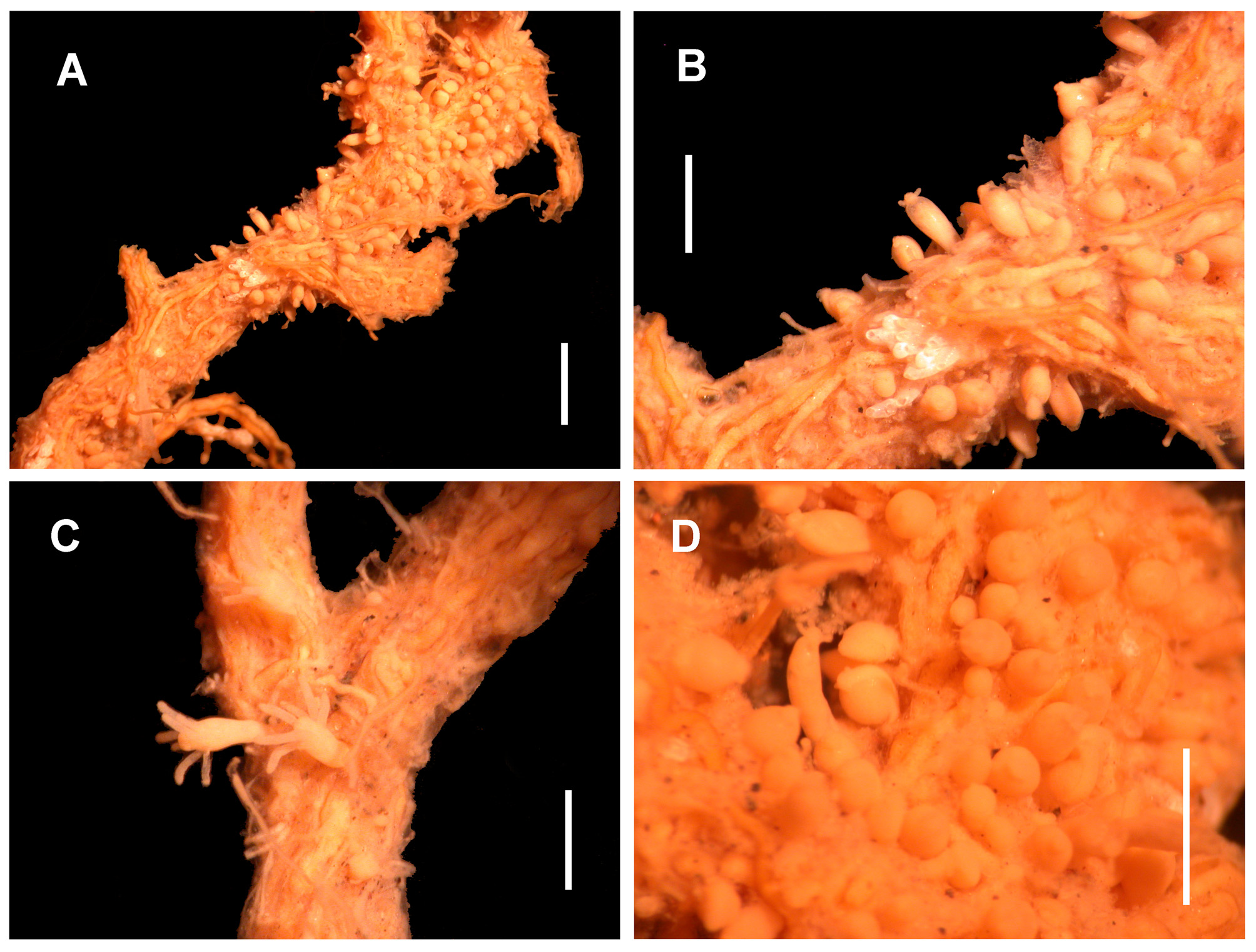 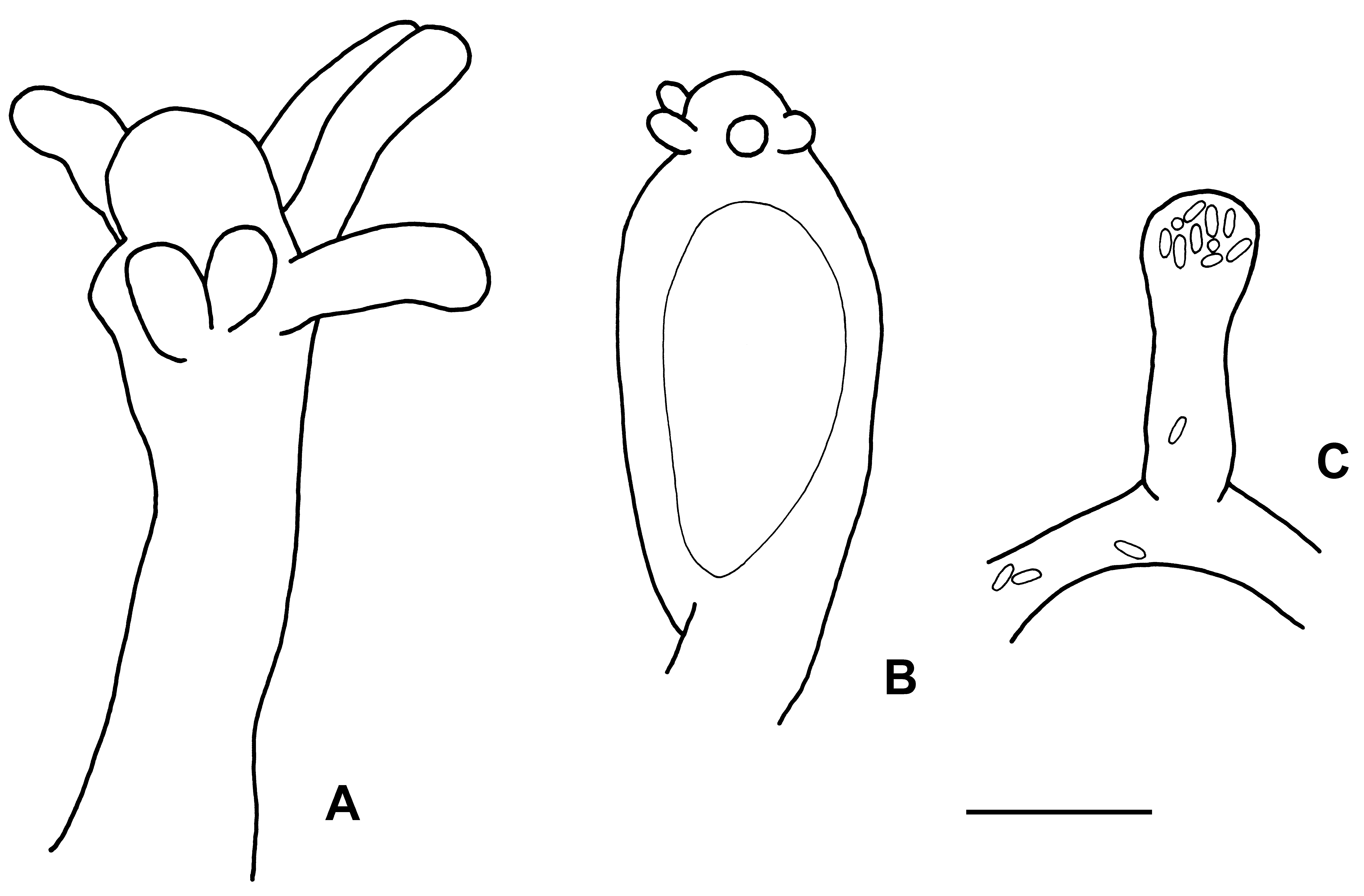