This species is only known from Chipwi Township, Myitkyina District, east-central Kachin State, Myanmar. It is a deciduous tree growing at ca. 2100 m elevation (7000 feet on label) and is still poorly known. The species flowers from March to April; its fruiting time is not known. Based on the IUCN Red List Criteria ( IUCN Standards and Petitions Subcommittee 2019), we suggest a conservation status for this species as DD (Data Deficient).

Pterostyrax burmanicus   was described on the basis of a single collection, R. Farrer 803, from Langyang, eastern Upper Burma ( Smith 1920; Fig. 1 View Figure 1 ). From then until the present work, it had been accepted as a species of Pterostyrax   Siebold & Zucc. endemic to Myanmar ( Wu and Li 1965; Chen and Chen 1996; Kress et al. 2003). The species was not included in the phylogenetic analysis of Fritsch et al. (2001). Although the fruit of P. burmanicus   is unknown, its vegetative and floral characters all agree with those of Rehderodendron   (Table 1) and, in combination, match no other genus of the Styracaceae  ( Hwang and Grimes 1996; Fritsch et al. 2001). Four critical characters differ from those of Pterostyrax   , but agree with those of Rehderodendron   : P. burmanicus   has faintly serrulate leaf blade margins (versus dentate in Pterostyrax   ), fertile shoots comprising only inflorescences (Figs 1 View Figure 1 , 2A View Figure 2 ; versus leaves (proximally) and inflorescences (distally); Fig. 2B View Figure 2 ), flowers that are not strictly arranged on one side of the inflorescence branches (Figs 1 View Figure 1 , 2A View Figure 2 ; versus arranged on one side of ultimate inflorescence branches; Fig. 2B View Figure 2 ) and petals that are distinctly connate beyond their bases (versus connate at their bases only (coherent)). On this basis, we conclude that P. burmanicus   is best placed in Rehderodendron   (Table 1).

Rehderodendron burmanicum   is very similar to R. microcarpum   K.M.Feng ex T.L.Ming, a species of far north-western Yunnan Province, China and northern Kachin State, Myanmar ( Ming 1983; Zhao et al. 2020). Both species are deciduous trees with a paniculate and densely stellate-pubescent inflorescence, filaments connate well below the middle and a pubescent style. The young leaves of R. burmanicum   have sparsely-scattered stellate pubescence and the stamens are longer than the petals (Figs 1 View Figure 1 , 2A View Figure 2 ), whereas the young leaves of R. microcarpum   are densely covered with stellate pubescence and the stamens are shorter than the petals (Fig. 2C View Figure 2 ). However, the only known locality of R. burmanicum   is in Chipwi Township, east-central Kachin State, Myanmar, which is well outside of the known geographic range of R. microcarpum   . Properly assessing the species boundaries or whether such exist between these two species must await more specimen collections and the generation of morphological and molecular data at the population level.

" Parastyrax burmanicus   W.W.Sm." is a name listed in Kress et al. (2003). We could not find any original published literature for this species or digitised specimens identified as such and conclude that it is a nomen nudum, likely resulting from a publication error meant as Pterostyrax burmanicus   . 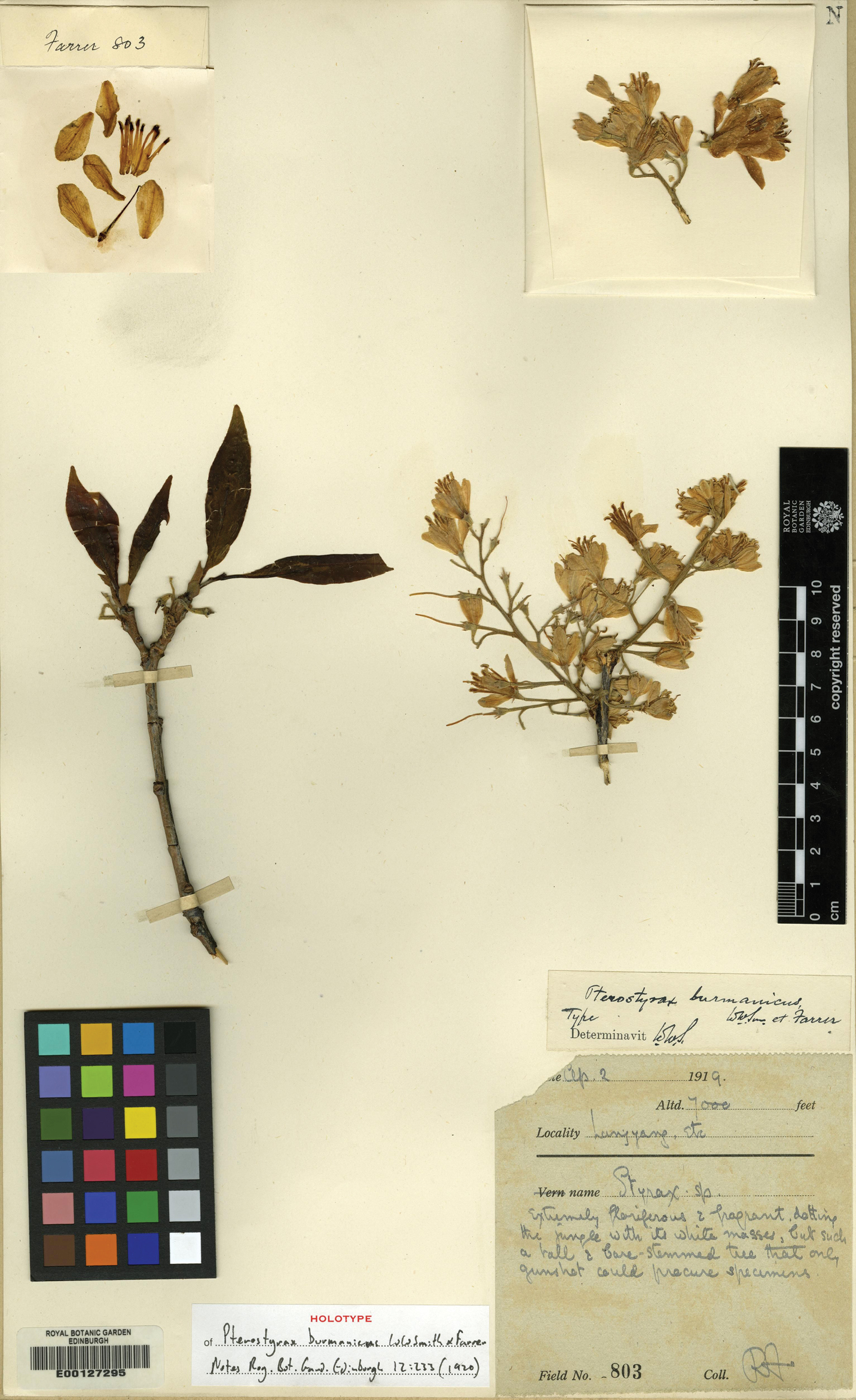 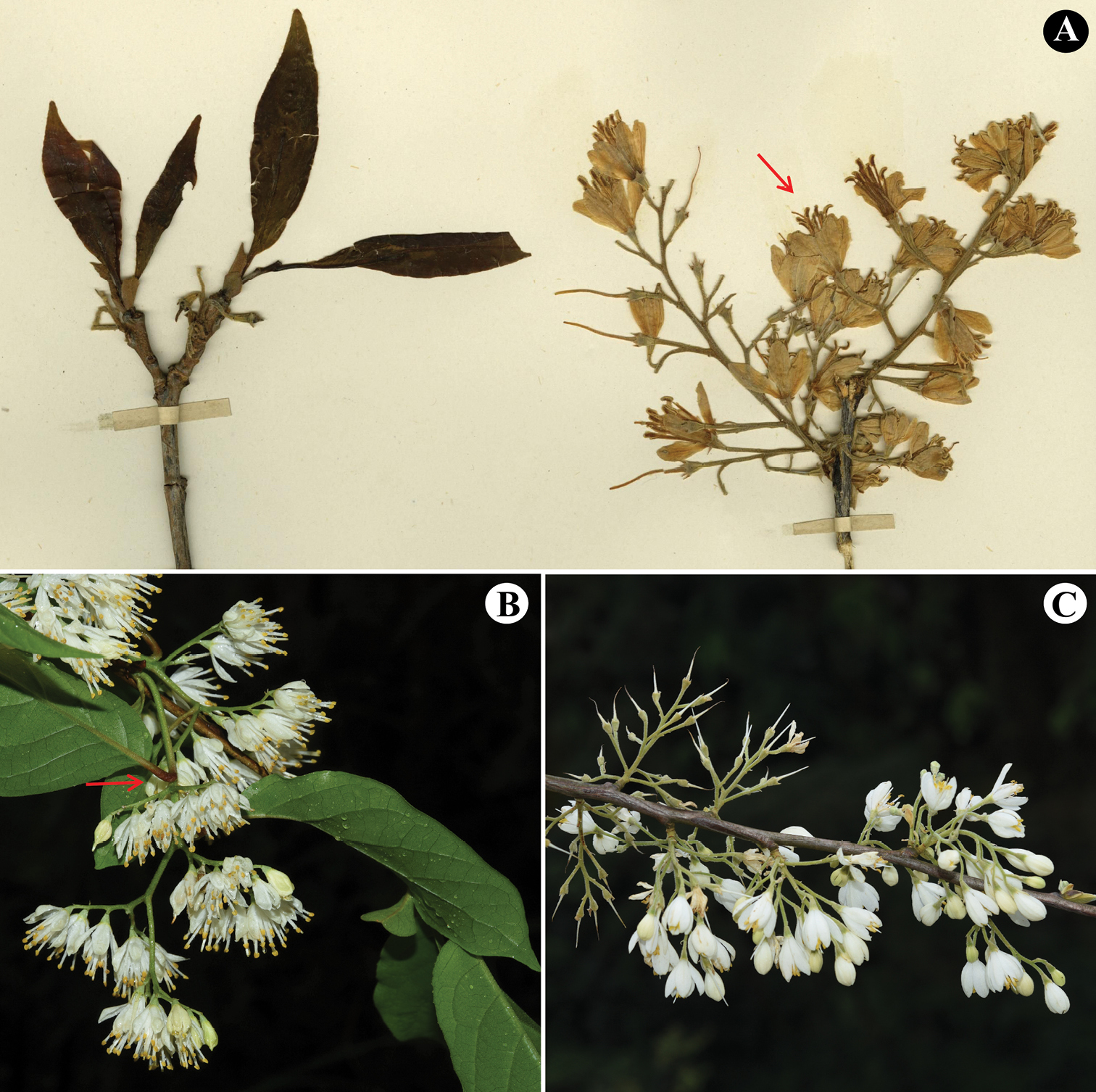