Figured specimens show a gradual loss of coloration of the reddish-pigmented soft parts in N. verbernei  after many years conserved in ethanol, from fresh specimens ( Fig. 19View Fig A–B) to old ones ( Fig. 19View Fig C–D). Rolán & Fernández-Garcés (1994) described the external morphology of N. verbernei  and N. decollata ( Rolán & Fernández-Garcés, 1994)  from Cuba as being translucent white with milk-white spots distributed on the dorsum. This could be a result of long-time storage of animals and consequent loss

of pigmentation, or even suggest that N. verbernei  from Brazil constitutes a different species than the Caribbean one (see below).

Rolán & Fernández-Garcés (1994) briefly described, but did not illustrate, opercula of N. verbernei  and N. decollata  , which are similar to those herein illustrated ( Fig. 19View Fig E–F) by being multispiral and having a subcentral nucleus. The operculum of N. albogemmata Laseron, 1958  , illustrated by Marshall (1983), possesses a remarkably prominent peg accessory, which was not observed in N. verbernei  from Brazil.

The radula of N. verbernei  from Brazil has a variable number of cusps in some teeth, in addition to an abnormal local asymmetry. The peculiar arrangement of teeth rows in a distinct ‘V-shape’ generates a pattern in which one tooth is exactly situated in the center of the six teeth adjacent to it ( Fig. 20DView Fig). Other genera of Triphoridae  also seem to present a slight level of ‘V-shape’ arrangement of rows, but apparently never like the observed herein.

The most surprising feature of the radula of N. verbernei  from Brazil is its radically different tooth morphology when compared to N. verbernei  from Cuba and other species ( N. decollata  , N. albogemmata  and N. aff. albogemmata  ). Main differences comprise the central tooth of N. verbernei  from Brazil bearing three main cusps (instead of two, four, six or nine cusps), lateral teeth with up to five or six cusps (instead of seven or more cusps in remaining species) and the main three claw-like cusps of marginal teeth (which completely differ from the several elongated cusps of the hand-shaped marginal teeth in other species). The radular formula of N. decollata  is 7-1-1-1-7 ( Rolán & Fernández-Garcés 1994), similar to the eight marginal teeth observed in N. verbernei  from Brazil, whereas the radula of N. albogemmata  and N. aff. albogemmata  is 1-1-1-1-1 (as argued by Marshall 1983) or 2-0-1-0-2 (as argued by Nützel 1998). This extreme variation in the composition of the radula indicates that Nanaphora  shows an atypical evolutionary flexibility in order to colonize new sponge hosts or, alternatively, it is constituted by different monophyletic lineages that are masked by a convergence of inflated and reduced shells ( Marshall 1983). 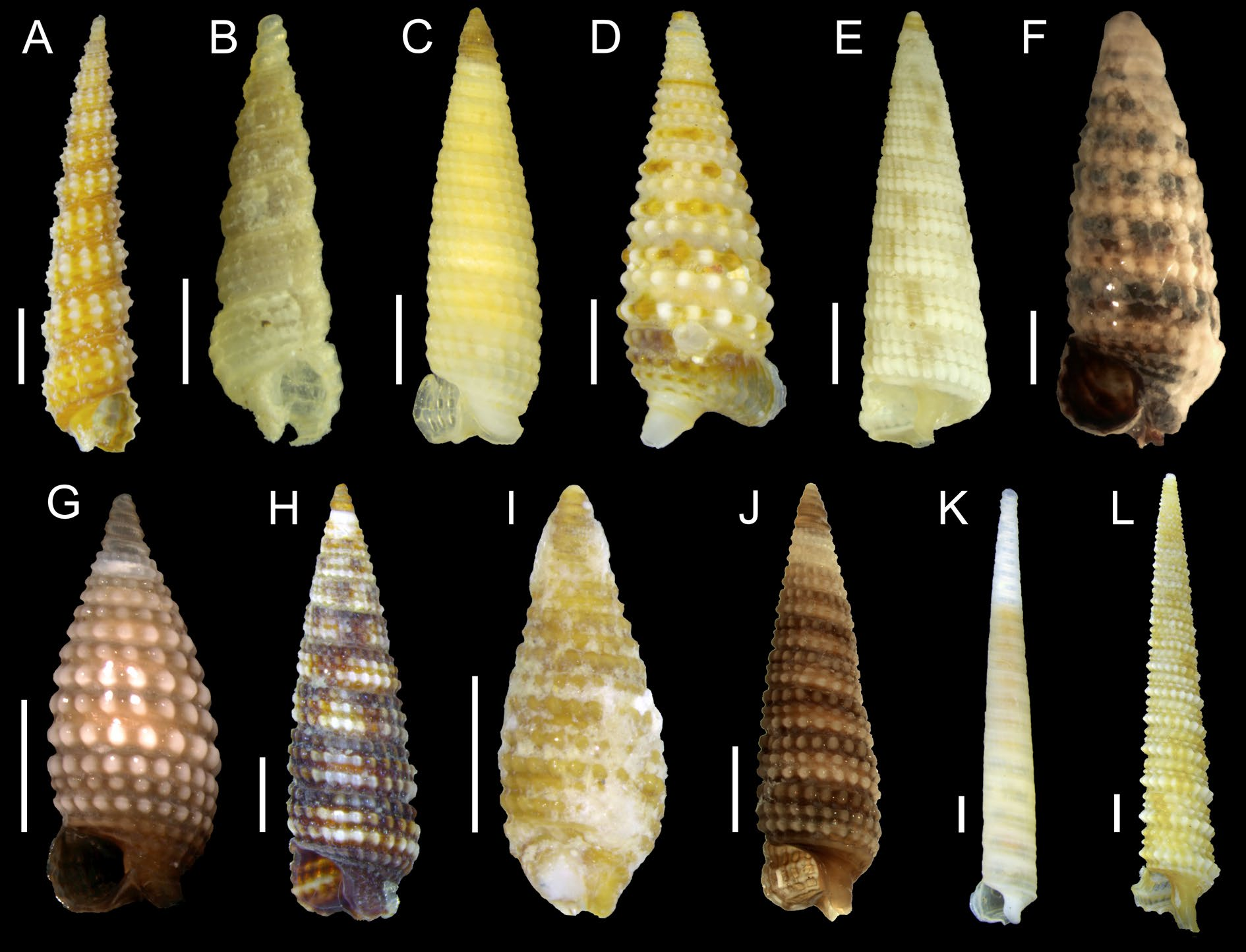 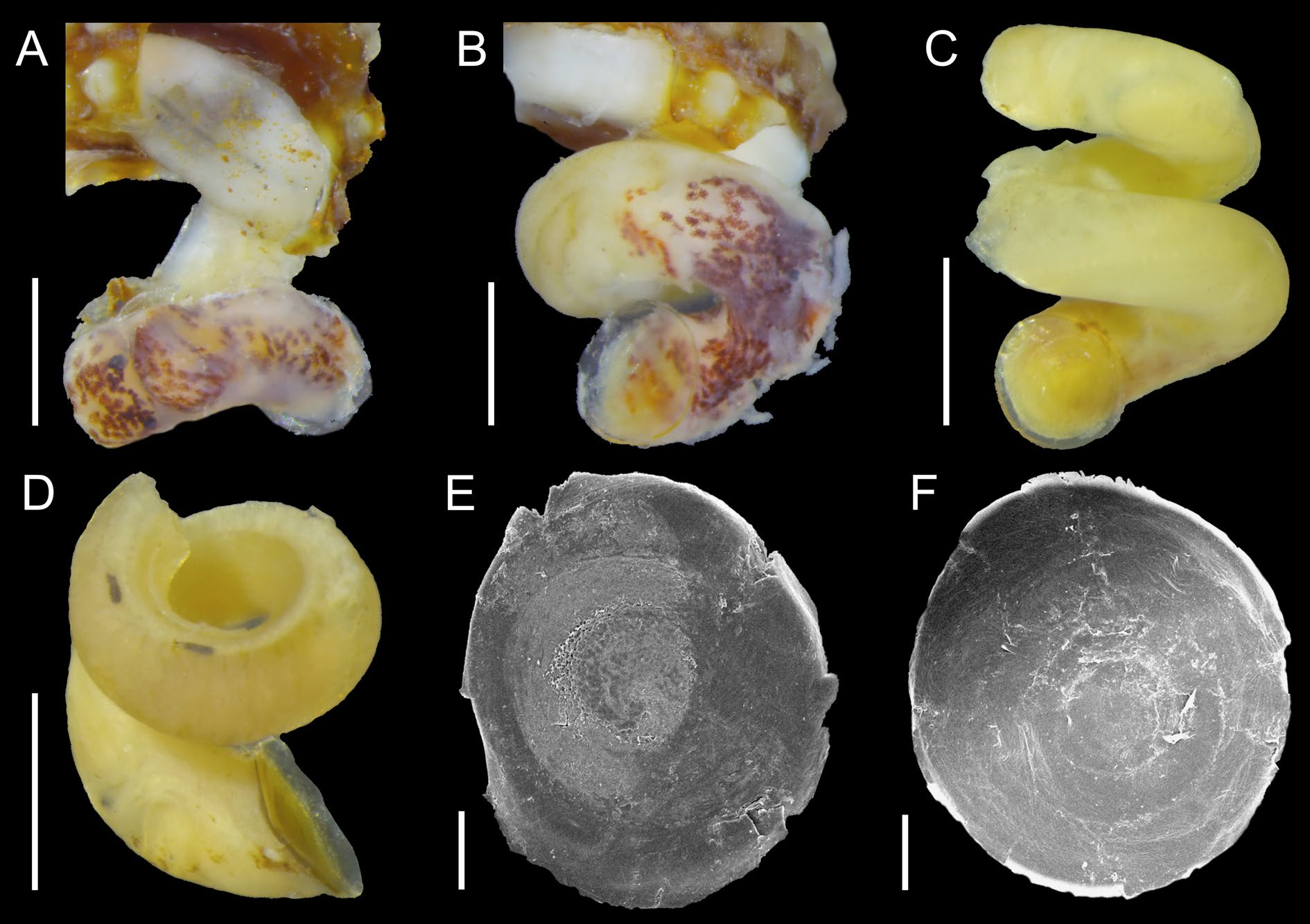