Meigen (1830: 7) erected the monobasic genus Camarota  on common features applying to many genera of Chloropidae  , but the character “Alae incombentes, fornicatae” (“Flügel aufliegend, gewölbt”) at once characterizes the single peculiar European species which he names Camarota flavitarsis  . He named the genus from the Old Greek word “kamarotós”, meaning convex or “forming a round arch”. Different from all other world species of Chloropidae  , the wings are not extended in one plane but close–fitting to the hind legs and curved around the abdomen and its tip, thus being concave on the lower side, comparable with similar wings of the European flies Stegana coleoptrata (Scopoli, 1763)  ( Drosophilidae  ) and Discomyza incurva (Fallén, 1823)  ( Ephydridae  ). Latreille (1805: 383) described Oscinis curvipennis  with not useful many features, but mentioning “Ailes se courbant vers leur extrémité posterieure” meaning the same as Meigen’s definition. A peculiar “vena spuria” between both medial veins was detected by Schiner (1864, “eine eigenartige Flügelfalte”) and also described and illustrated as “piega alare” by Leonardi (1900).

Undoubtably, this pleat supports the wing folding around the legs and abdomen. Interestingly, Goodliffe (1942: 311, 323) speculated about a possible morphological and behavioral mimic background: “The Camarota curvipennis  adults had a remarkable appearance in that the colourless wings, which showed a small pleat in the medial-cubital region when at rest, were bent down close to the shining black dorsal surface of the abdomen so that the insects somewhat resembled small black beetles or wingless Psocids. The long thick black aristae which were held erect, resembled filamentous antennae. They moved in vigorous jumps like flea–beetles ( Phyllotreta  ). Possibly there is a protective resemblance of some kind”. The jumping flight was first mentioned by Schiner (1864), and the beetle habitus of such flies was expressed already by the scientific name Stegana coleoptrata  (see above).

Though the genus is monobasic, Westwood (1840) designated a junior taxon, Camarota aurifrons Haliday, 1833  , as type species of the genus not at all citing Meigen’s C. flavitarsis  . The taxonomical act to correct this invalid designation was published by Sabrosky (1941), who formally fixed Oscinis curvipennis  , the senior synonym of Meigen’s C. flavitarsis  , as the type species of Camarota  .

The larval substrate of the single European species Camarota curvipennis  was repeatedly reported by applied entomologists being engaged with cereal pests in different countries. A great part of the 251 checked publications dealing with this species used either the synonym C. flavitarsis Meigen  (69 papers) or the erroneous name C. curvinervis  (43 papers). Already Schiner (1864: 222–223) recorded the flies in numbers below turf of Sesleria caerulea  (L.), and the identical observations near Vienna on the “blue-moor grass” were repeated by Funk (1901). Host plants, oat (“biade”, Avena  L.) and wheat (“frumento”, Triticum  L.), were first clarified for the European species C. curvipennis  (under the name cerealis  ) by Rondani (1873a; 1973b), later maize (“granturco”, Zea  L.) was added by Leonardi (1900) [confirmed by Shapiro (1962)] and rye ( Secale  L.) and barley ( Hordeum  L.) were added by Balachowsky & Mesnil (1935: 977). Nartshuk (1972: 35) and Uffen (1978: 226) mention also the quitch, Elytrygia repens  L. (= Agropyron repens  ) as a wild host grass. In two papers, Marchal (1894; 1897), the larval bionomy was described in detail. Larvae develop gregariously in the youngest upper part of crops and pupate together above the uppermost node of the stem. This development confirms with most other chloropids destroying the vegetation point of grain and other monocots. Attacked crops do not develop ears and stop growing taller than 30 cm. Mostly the maggots were collected and reared together with those of other chloropid grain pests, Oscinella  spp., Meromyza  spp., and as secondary stem invaders Elachiptera  spp. It remains doubtful if the larvae are phytophagous or phyto-saprophagous. For the first time here we report an introduced grass as most probable host plant, the neophyte Paspalum miliaceum  L., sawn on the roof of the “AQUAtoll” swimming baths in Neckarsulm ( Germany), 49°11’21”N 9°14’38”E, which housed an isolated immense population of C. curvipennis  on 26 July 2008, detected by Klaus Schrameyer and identified by the second author. This example corresponds to a phytophagous development. Deeming (1981) in his description of C. cylindrica  also reports grasses ( Poaceae  ) as developmental substrate, but the larvae are reported as predators of other fly larvae, Diopsis  sp. ( Diopsidae  ) in rice plants (observations of Descamps, 1957: 141, 147). It is noteworthy that all C. cylindrica  specimens which we identified were obtained by canopy fogging from tall rainforest trees in Central Africa. The third species, C. angustifrons Bezzi, 1908  , is known to attack shoots of the grasses Panicum phragmitoides Stapf  , Andropogon gayanus Kunth  , and A. fastigiatus Swartz  in Nigeria ( Deeming, 1981). 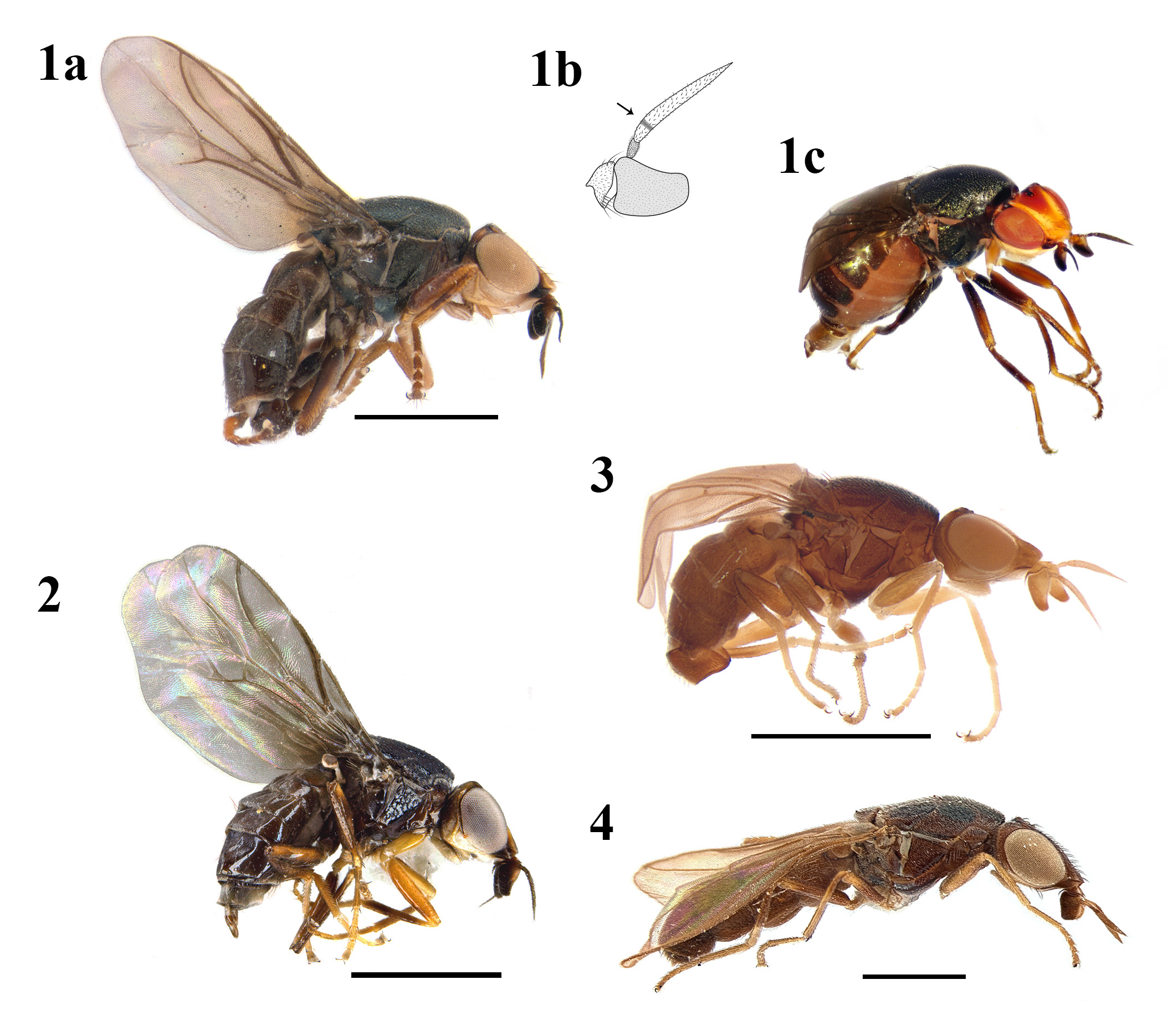