Ambates ; Chevrolat 1835 [Appendix with list of species treated in Chevrolat 1833 –35]. Not available (deviation from original spelling neither mentioned or explained; see text below)

The history of confusions concerning the names Ambates and Embates , their authorships, type species and interpretations is presented in Prena (2003a) and briefly summarized here. Chevrolat had adopted Schönherr’s manuscript name Ambates (by explicitly citing its origin) in his own paper, spelled it Embates in the text ( Chevrolat 1833) and Ambates in the appendix of the same work (Chevrolat 1835). This nomenclatural act was generally disregarded in the literature because of supposed absence of a valid description. Subsequent studies in this group of weevils referred to Ambates Schönherr (1836) . O’Brien & Wibmer (1982) recognized the formal validity of Embates Chevrolat , but considered the original spelling a lapsus calami because of its deviation from that used in the appendix. Alonso­Zarazaga & Lyal (1999) considered the suppression of the spelling Embates as technically inconsistent with the International Code of Zoological Nomenclature and regarded Embates Chevrolat a subjective senior synonym of Ambates Schönherr. The latter was distinguished from Embates and resurrected in Prena (2003a).

Drepanambates Jekel (1883) is another genus that needs to be addressed in this context, because its cursory description referred to species of Embates , Ambates and species representing another, still undescribed genus, but failed to designate a type species. In order to preserve Jekel’s original intention and to suppress subsequent erroneous interpretations by Champion (1907) and Hustache (1938), I designated Peridinetus schoenherri Chevrolat as type species ( Prena 2003a). In this sense, Drepanambates includes certain species that occur in the coastal rain forests between the Brazilian provinces Bahia and Santa Catarina, i.e. Ambates callinotus Chevrolat , A. ephippius Chevrolat , Drepanambates amabilis Jekel and Peridinetus schoenherri . They exhibit a falciform rostrum with a ventrally produced lateral edge, basally parallel pronotal sides and often slightly convergent elytral sides. However, these character states can be found in various combinations in species of Embates Chevrolat. My study of approximately 150 species revealed no character state that could be used to divide Embates into phylogenetically meaningful subunits. This is not surprising, because the great species diversity of Embates and the close relationship to several genera with the same larval host favor a concept of young phylogenetic age. For this reason, I include Drepanambates Jekel in Embates Chevrolat as a new junior synonym.

Life history. Species of Embates occur primarily in disturbed habitats of evergreen forests, generally not above 2600 m. A few species dwell in open habitats, among them E. solani , E. marginatus and E. vestitus . Adult specimens are diurnal and can be found on their host plants throughout the year. Plants in Piperaceae could be confirmed with reasonable confidence as diet for the majority of the Costa Rican species ( Marquis 1991, this study) and as larval host for approximately six species. Species of Piper (including Pothomorphe ) represent the principal host plants, while at least E. flavolimbatus and E. peperomiae are associated with species of Peperomia . Most adult species are oligophagous in particular groups of hosts, while some appear to be strictly monophagous. However, local subpopulations of oligophagous species may exhibit a clear preference for a particular species of host plant. A comprehensive concept about the phylogeny of the neotropical species of Piper is not available. My experience is that Burger’s (1971) provisional arrangement shows much agreement with the plant­weevil associations found by Marquis (1991), and my observations. Species with palmately veined leaves (e.g. Piper pseudo­lindeni , P. retalhuleuense , P. reticulatum , P. sanctum ; with the notable exception of P. marginatum ) are visited rarely by species of Embates . The remaining species of Piper can be divided into two groups based on the mode of their distal growth. The shoot­apex and the new leaf emerge either from within the leaf­base at the flowering nodes, or from within the prophyll and free of the leaf­base at the flowering nodes ( Burger 1971). Despite oligophagy, almost all species of Embates seem to be restricted to one or the other of the two groups, while size, shape, venation and texture of the leaf exert little influence on the plant selection. The same observation holds for species in Ambates , Pantoteles and Peridinetus (personal data). Adult weevils of these four genera often can be found feeding or resting in characteristic holes made in the leaf­blade ( Fig. 24 View FIGURE 24 ), thereby exposing their flanks and mimicking fallen flowers, bracts, seeds or excrement. Oviposition has not been observed to my knowledge. The eggs are relatively large, elongate, and produced in low numbers. Larval development takes place in the soft or slightly woody tissue of the stem, rarely in the petiole or in the root. The larva tunnels the interior of the stem without giving any external evidence of its presence except of an indistinct oviposition hole. Debris is disposed within the tunnel, where pupation takes place without a cocoon. The hatched weevil prepares an exit hole for leaving the interior of the host plant. By that time, the infested part of the host can be damaged to a degree that inhibits further terminal growth of the stem. Embates vanus is known to affect Piper nigrum (a cultivated oriental species) in Bolivia (E. Ramos, pers. comm.). No information is available about the development of the species associated with Peperomia .

Sexual dimorphism. Female specimens generally have a slightly longer, less sculptured rostrum with the antenna inserted slightly more basally compared to male specimens. Sexing of specimens can be done in most cases based on the degree of convexity of the basal ventrites. In a few cases, males can be recognized by the 1) more elongate antennal club (e.g. E. discordabilis ), 2) notched and pilose ventrite 5 (e.g. E. pseudobumbraticus ), 3) fringe of hairs on the ventral tibial edge (e.g. E. cretifer ), or 4) enlarged protibial mucro (e.g. E. sinuatus ). The pronotum is generally of subequal size in both sexes, while it exhibits dimorphism in various species of Ambates and Pardisomus .

Morphological variation. Apart from a few cases of non­systematic deviation probably caused by injury at immature stages, some systematically occurring variations were observed. Most noteworthy is the significant relationship between the altitude of the collecting site and the body proportion of E. sinuatus . Figure 25 View FIGURE 25 illustrates this relationship for specimens collected along a 30 km long transect on the northern slope of Volcan Barva in Costa Rica. Specimens from high elevations are more slender than specimens collected at lower elevations (Fig. 80, 81). The same relationship holds for specimens from other regions ( Fig. 25 View FIGURE 25 ). On the Pacific side of the Costa Rican Cordillera de Talamanca, with more seasonal weather conditions, this effect can be accompanied by a modification of the color­pattern (see next paragraph). It is possible that the local temperature contributes to these variations, for instance by a prolonged larval development in cooler habitats. Similar observations on the possible effects of altitude on the body size were made for species of Pantoteles ( Prena 2001) and Ambates ( Prena 2003a) . The currently non­quantified contribution of environmental and genetic variables to the prevailing heterogeneity of adult specimens, particularly in geomorphologically heterogeneous habitats, can render the identification of some species a delicate issue when insufficient material is available for comparison.

Color­pattern. The presence of small scales and their frequent arrangement forming intriguing ornamental patterns prevails in most species in and near Embates . Champion (1907) used the color­pattern in his key for pragmatic reasons. Nevertheless, he was aware of the close relationship of several species with seemingly unrelated vestiture. Later authors, in particular Casey (1922) and Voss (1953, 1954), implied a greater taxonomic value of the color­patterns and based new genus­group names on them. A more comprehensive study of these patterns now demonstrates their compound nature. The material available gives numerous examples, in particular in complexes of imperfectly separated species, that allow for tracing the origin of the various components of the color­pattern. It is concluded here, that the primitive condition was a dark elytral macula encircled by a thin line of light­colored scales. This condition is preserved in several species near E. caeca and E. sagax . These species also provide evidence that the light­colored circumambient line disintegrated into single elements ( Fig. 26, 28 View FIGURES 26–33 ). It was the modification of these elements, in particular the ante­macular and the post­macular elements, that led to the immense diversity of color­patterns in the Ambatini ( Fig. 29–33 View FIGURES 26–33 ). Modifications included width, length, shape, bearing and position of each element, as well as color, size and density of the scales. In some cases, the basic vestiture dwindled to microscopic scales, so that the ante­ and post­macular elements dominate the color­pattern, such as in E. cretifer (Fig. 177) and E. paludicola (Fig. 200). In other cases, the ante­ and post­macular elements merged with the basic vestiture, such as in E. burgeri (Fig. 93) and E. polymorphus zeledonensis (Fig. 183d). Slight modifications of a single component may have a tremendous effect in complex color­patterns, for example in E. sinuatus and E. belti . It can be said generally, that the dark elytral macula (if present) tends to vary rather little, while the adjacent light­colored elements exhibit much more variability, often clinal and occasionally extreme in extent. The nature of this variation is thought to be a combination of environmental factors, such as the weather conditions during larval development and metamorphosis, and various degrees of genetic heterogeneity in the population. 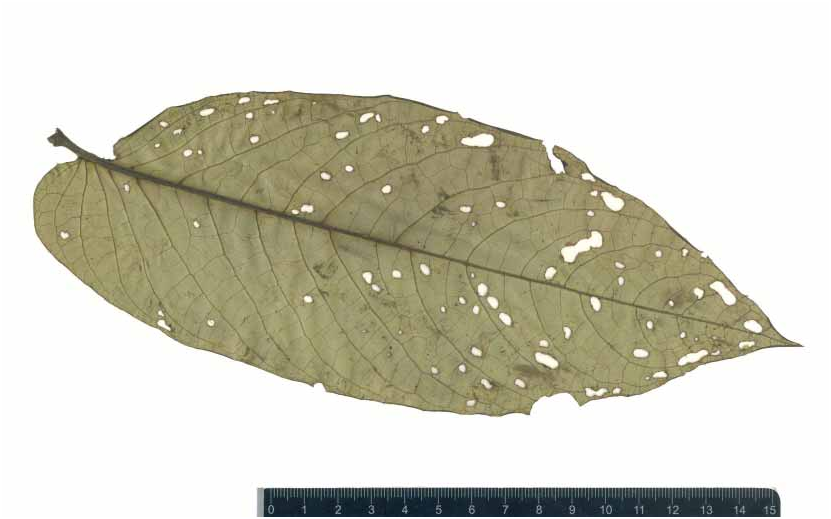 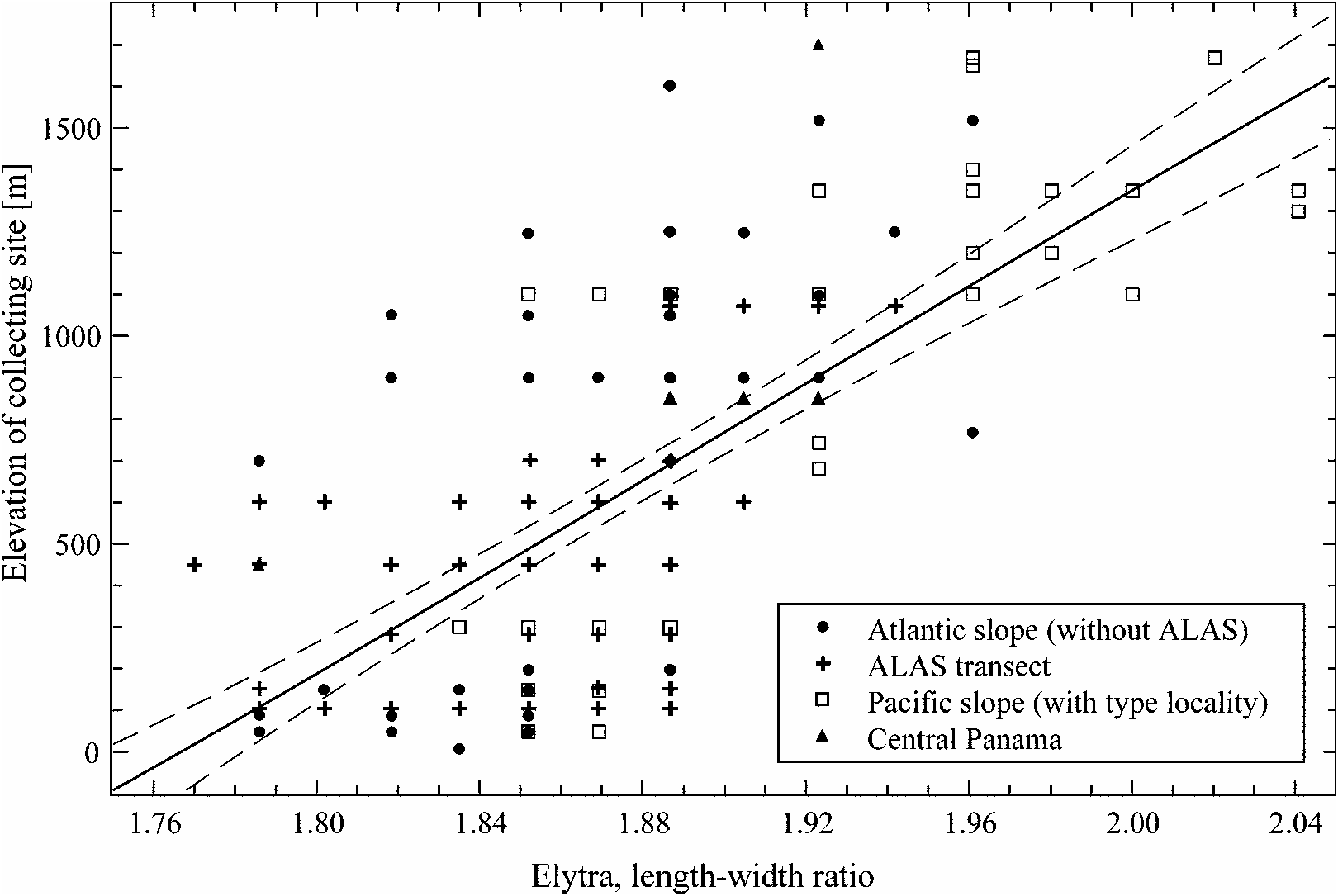