Suffrutescent twiner c. 1 m long with younger branches densely covered by more or less straight to bent often retrorse rather stiff reddish hairs, glabrescent. Leaves somewhat coriaceous, shining green above, paler below; blade 7-10 × 2.5-3.5 cm, elliptic, cuneate at base, acuminate at apex, with reddish bent hairs beneath, glabrous above, without colleters at the very base above; margin entire; venation pinnate and looped, reticulate; midrib when dry distinctly impressed above and raised beneath; secondary veins divaricate to right-angled and tertiary veins grossly reticulate, slightly raised on both sides when dry; epidermis ± smooth on both sides; petiole distinct, 0.5-1 cm long, with dense reddish mostly appressed hairs, glabrescent. Inflorescences extra-axillary, shorter than the adjacent leaves; cyme appearing umbel-like but actually with flowers in pairs with reduced internodes at a c. 1 cm long stalk, 3-5 flowered, hairy; pedicels c. 1 cm long; bracts and bracteols narrow, 1.5-3 mm long. Calyx lobes united only at the very base, c. 2.3 × 0.9 mm, much longer than the corolla tube, triangular, acute, with long reddish hairs outside, glabrous inside, with a small colleter at each lobe sinus. Corolla ellipsoidal in bud, contorted with the left lobe margin overlying, not or only slightly twisted, with the lobes fused at the base only into a short tube, greenish yellow with small purple dots at base; tube c. 0.3 mm long, glabrous; lobes c. 6.5 × 3 mm, elliptic, rounded to bluntly acute at apex, rotate, glabrous outside, with rather long and erect but sparse hairs along left margin (seen from above) and on the inside of lobe becoming denser towards base. Staminal column c. 2.8 mm high (c. 1 mm with projecting connectives excluded); filaments broad with short sclerified margins (anther wings) and with five cup-like projections below (pollinium entrances), united into a short cylinder at base; anthers with connectives much prolonged into yellow filiform appendages grouped together basally in a column but diverging above, papillate; filiform appendages c. 1.8 mm long; thecae distinctly papillate, reddish brown. Corona lobes filiform, c. 0.8 mm long, ± horizontal, much shorter than the prolonged connectives, papillate. Pollinia ellipsoidal, c. 0.2 mm long, attached to minute soft corpuscula. Gynoecium not studied. Fruits unknown.

HABITAT AND DISTRIBUTION Calyptranthera sulphurea   is known only from the type locality at Daraina in the northeastern part of Madagascar, found in dense humid forest at 800 m altitude. It was collected in flower in December   .

Calyptranthera sulphurea   has yellow flowers. In contrast, all other species of Calyptranthera   are basically reddish, from pale rose or almost white to lavender and purple or dull brown. In addition to the yellow flowers this species differs from the sympatric C. villosa   by its smaller staminal column, the shorter and more or less horizontal corona lobes, by its connectives lacking long hairs on dorsal side and by the much less hairy corolla lobes. Furthermore, the thecae are reddish brown in C. sulphurea   , yellow in C. villosa   . The pubescence of the corolla lobes is not seen without magnification, whereas in C. villosa   the white (when dry) indumentum completely covers the adaxial side of the lobes.

The epithet of this species alludes to the yellow flowers. 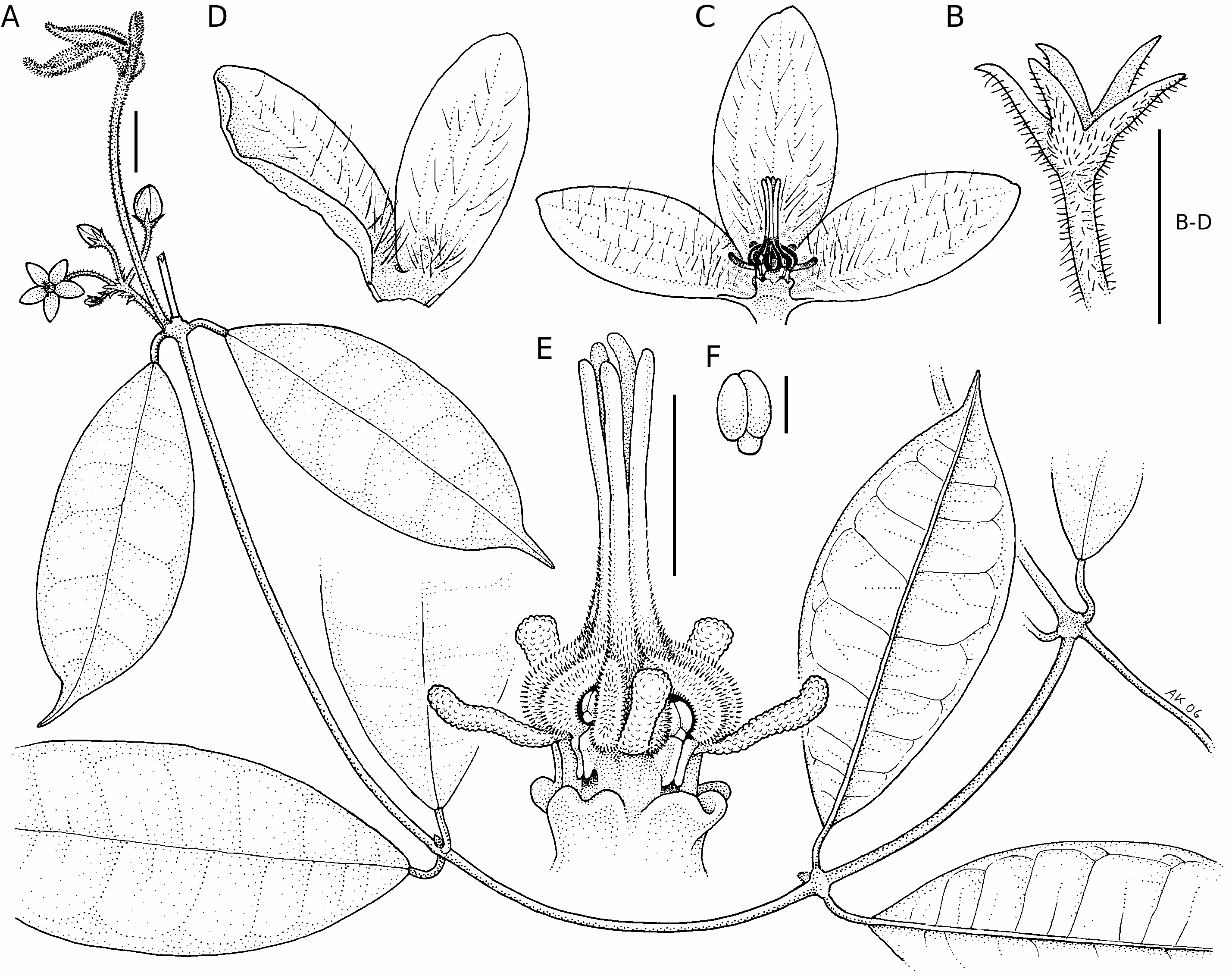