Diagnosis: Differs from other Paredrodesmus   in its relatively slender anterior podomeres, in the wide spacing of the antennae and in the unique form of the gonopod.

Description: As for the genus. Males 10–11 mm long, 0.8–0.9 mm in maximum vertical diameter. In alcohol, adults are a uniform, very pale yellow. Antennal bases separated by nearly twice a base diameter, antennomere 6 barely wider than 5 ( Fig. 6 View FIGURE 6 B). Podomeres on anterior legs much less swollen than in other Paredrodesmus   . Legpairs 6 and 7 with a wide gap between opposing coxae, legpairs 3, 4 and 5 with a narrower gap; flexed gonopods reach to legpair 3. Genital opening on leg 2 coxa on an inconspicuous mesal projection ( Fig. 6 View FIGURE 6 A). Rear margin of gonopod aperture barely raised ( Fig. 7 View FIGURE 7 ). Telopodites ( Fig. 7 View FIGURE 7 ) close together at base but not fused. Telopodite base very small with a few long setae. Distal portion of telopodite arising medially, nearly straight, somewhat flattened mesolaterally. A process arises at about one­third the telopodite length which is directed caudad and slightly proximad and whose blunt tip curves mesad; the distal surface of this process carries a comb of ca. 20 long, thick setae directed distad and slightly caudad; some of these setae appear to be identical to the peg­like structures seen in other Paredrodesmus   . Just distad to this process the telopodite bends slightly laterad. At about two­thirds its length, the telopodite has a crimp on its anterior surface (‘c’ in Fig. 7 View FIGURE 7 ) and gives rise just basal to this point to the long, tapering solenomerite, which projects distad and laterad before curving so that the tip points cephalad. The prostatic groove runs on the mesal surface of the telopodite before entering the solenomerite. Distal to the crimp, the telopodite bends a little caudad. A small, rounded uncus arises just under halfway between the crimp and the apex, which tapers to a blunt point bent caudad very near its end, with a small, laterally directed tooth at the level of the bend.

Distribution and habitat: In well­rotted litter, humus and richly organic soil over ca. 1800 km 2 on the southern portion of Tasmania’s East Coast including Maria Island, from near sea level to ca. 600 m, mainly in dry eucalypt forest ( Fig. 12 View FIGURE 12 A). Co­occurs with P. purpureus   in the southern portion of its range. This species can be locally abundant.

Etymology: Greek akerios, dead, + dendron, tree, noun in apposition. So named because the gonopod telopodite resembles a long­dead but still upright tree which has lost its smaller branches. 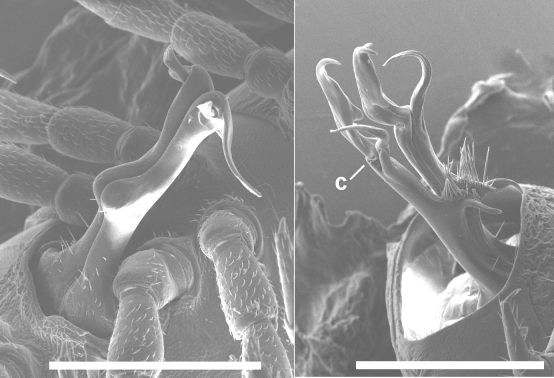