Colonies erect, stems unbranched or sparingly branched, up to 8 mm high and with up to 40 hydranths. Stems arise from creeping hydrorhiza. Stems always monosiphonic, irregularly segmented, regularly with intercalated segments without hydrotheca, these internodes short and with two marked bulges at their ends ( Figure 7C View Figure 7 ). Internodes generally short and stout, sides often undulated. Hydrotheca sitting at the end of segment like a prolongation of it, rim perpendicular to segment axis. One or two side-branches, if present, arising immediately below hydrotheca, angles quite acute ( Figure 7D View Figure 7 ). Hydrotheca with slightly diverging wall, these quite straight, not curved; diameter at level of diaphragm 0.15–0.17 mm, depth 30–45 mm. Secondary hydrothecae present, with hydrophore. Hydranths with 20–24 tentacles, body and tentacles containing zooxanthellae. Gonothecae arising from within primary hydrothecae. Female gonotheca pear-shaped, about 0.8–0.9 mm long, slightly compressed, opening on side, formed by a short, vertical, completely adnate tube with a median septum, opening without distinct hydrotheca, but rim with some desmocytes; opening plane perpendicular to long axis of gonotheca; two protruding hydranths present; about three eggs per gonotheca. Male gonotheca not observed; according to Babić (1913) oblong ellipsoid, 0.68–0.85 mm long, smooth, without hydranths.

The type material of Bourne (1890) did not include gonothecae, a character usually indispensible for a correct identification of Halecium   species. Two other traits, however, allow recognition of the species. This is for one the presence of zooxanthellae, for the other the segmentation pattern with its short, ahydrothecate segments with bulging ends (or segments constricted in the middle). Bourne’s material had both characteristics. Babić (1913) and Bedot (1914) described fertile material. Later authors, like Vervoort (1959), Millard (1975) and Cornelius (1995), also included material lacking zooxanthellae and with smooth perisarc. The female gonothecae depicted by Hamond (1957), Vervoort (1959) and Cornelius (1975, 1995) differ from the one depicted in Figure 7E View Figure 7 and they appear identical to that of H. beanii   ( Figure 5G View Figure 5 ). The egg number is also higher than usually found in H. lankesterii   . These differences prompted Peña Cantero and García Carrascosa (2002) to postulate that the mentioned material of Cornelius and Vervoort actually belonged to a different, so far unnamed species. I concur with Peña Cantero and García Carrascosa (2002). The occurrence of fertile, monosiphonic stems of Halecium beanii   (see under this species) led me to suspect that the material of Hamond (1957), Vervoort (1959) and Cornelius (1975, 1995) was actually composed of monosiphonic colonies of H. beanii   . Hamond (1957) acknowledged that H. beanii   and H. lankesterii   resemble each other very closely, but he insisted that they are distinct. He kept them apart on account of the sharply curved side-branches. His colony in Figure 9 View Figure 9 resembles more H. lankesterii   and it thus appears that his material contained indeed some H. lankesterii   besides monosiphonic H. beanii   .

Halecium lankesterii   also occurs in the Mediterranean and can be confounded with H. petrosum   if no female gonothecae are present. The presence of zooxanthellae, the wider hydrothecae and the characteristic ahydrothecate segments of H. lankesterii   help to distinguish them (compare Figures 7 View Figure 7 and 8 View Figure 8 ).

Halecium nanum Alder, 1859   resembles closely H. lankesterii   as described above. Both have zooxanthellae in their tissue. The female gonotheca of H. nanum   has two hydrothecae that reach to the distal end ( Calder 1991), while they end roughly in the middle in H. lankesterii   . Their different ecology additionally suggests that they are likely separate species. Halecium nanum   is usually epiphytic, mostly occurring on pelagic Sargassum   sp. in warmer waters of the Atlantic. Cornelius (1995) thought that it might be wider spread and occur on a wider range of substrata. 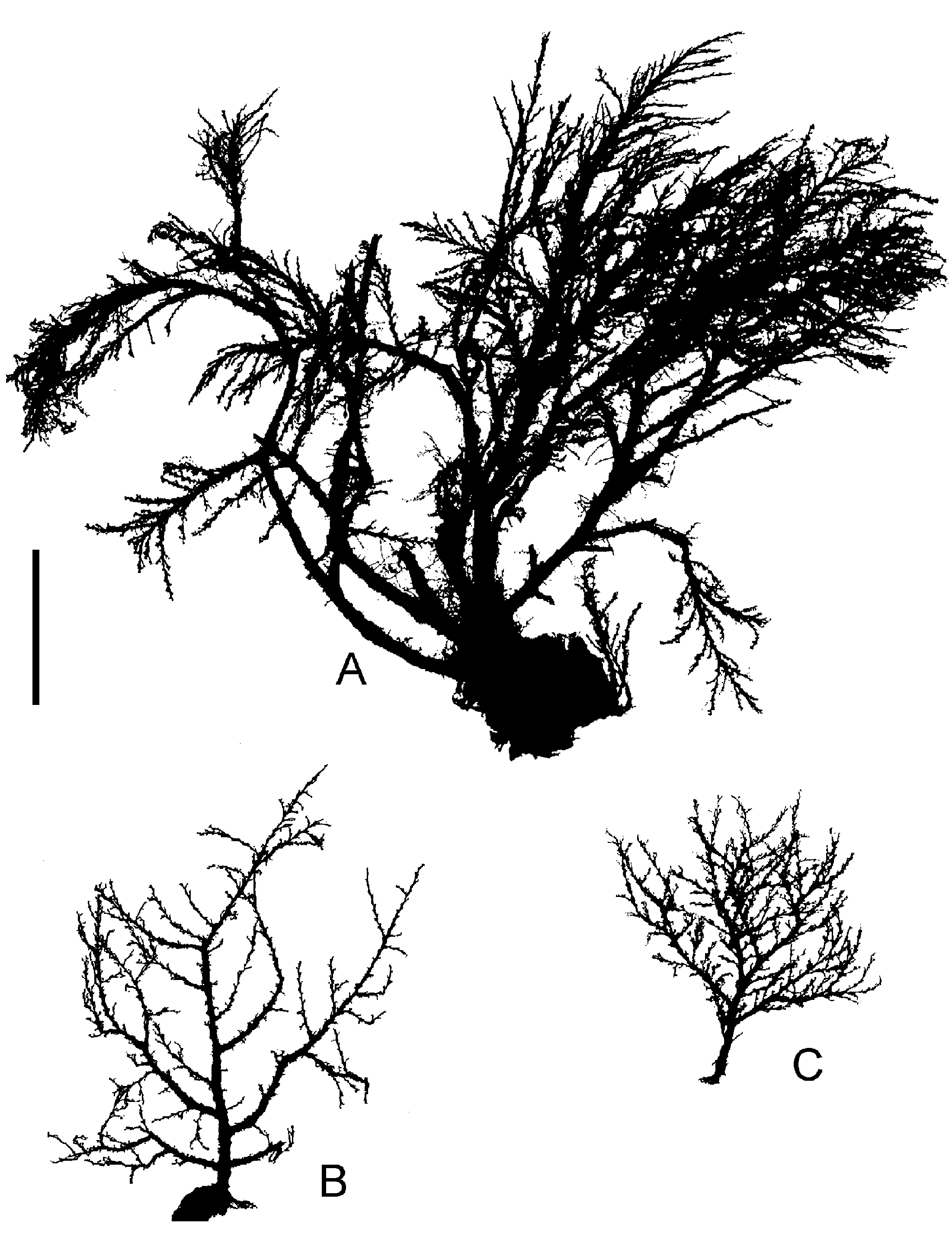 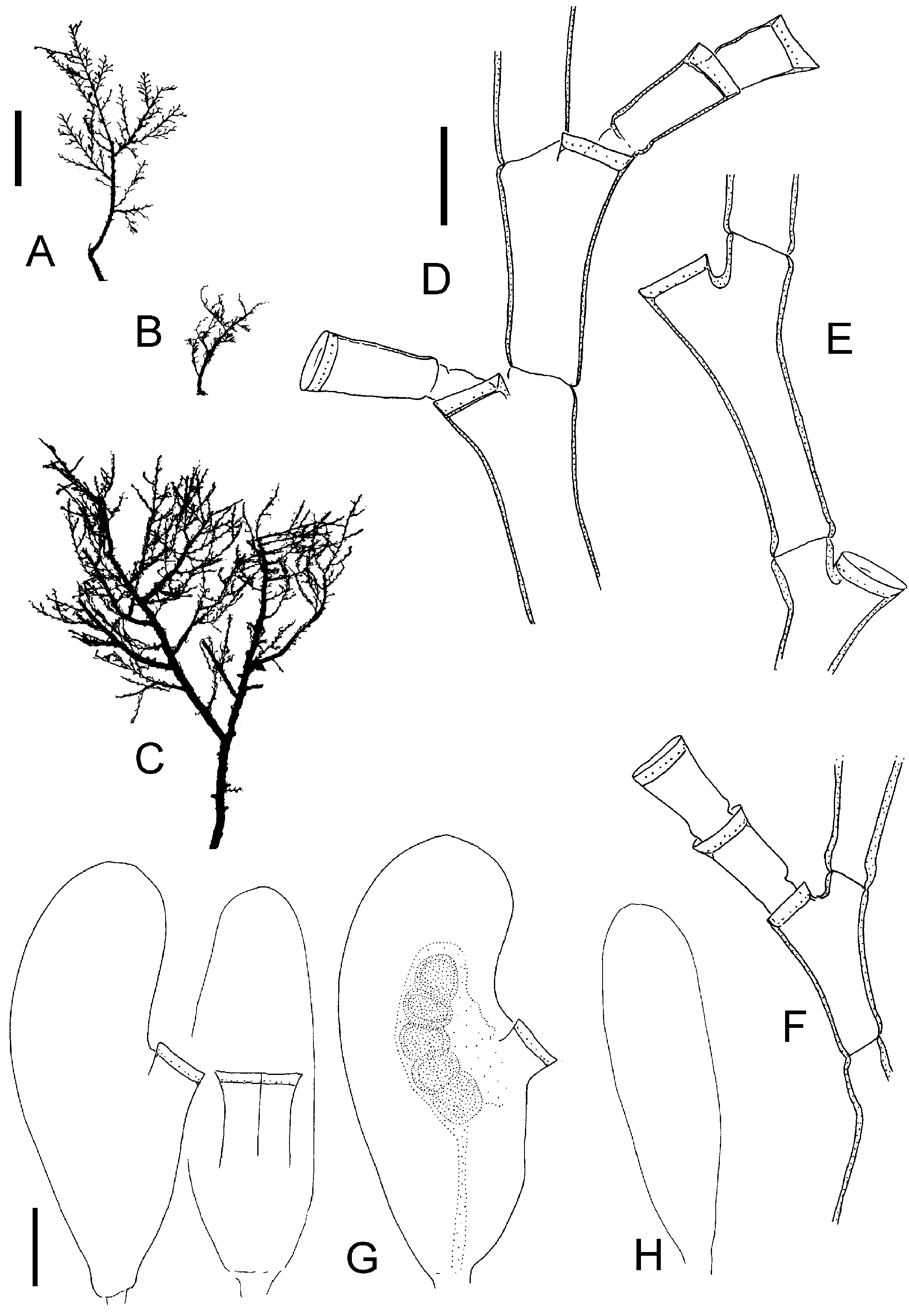 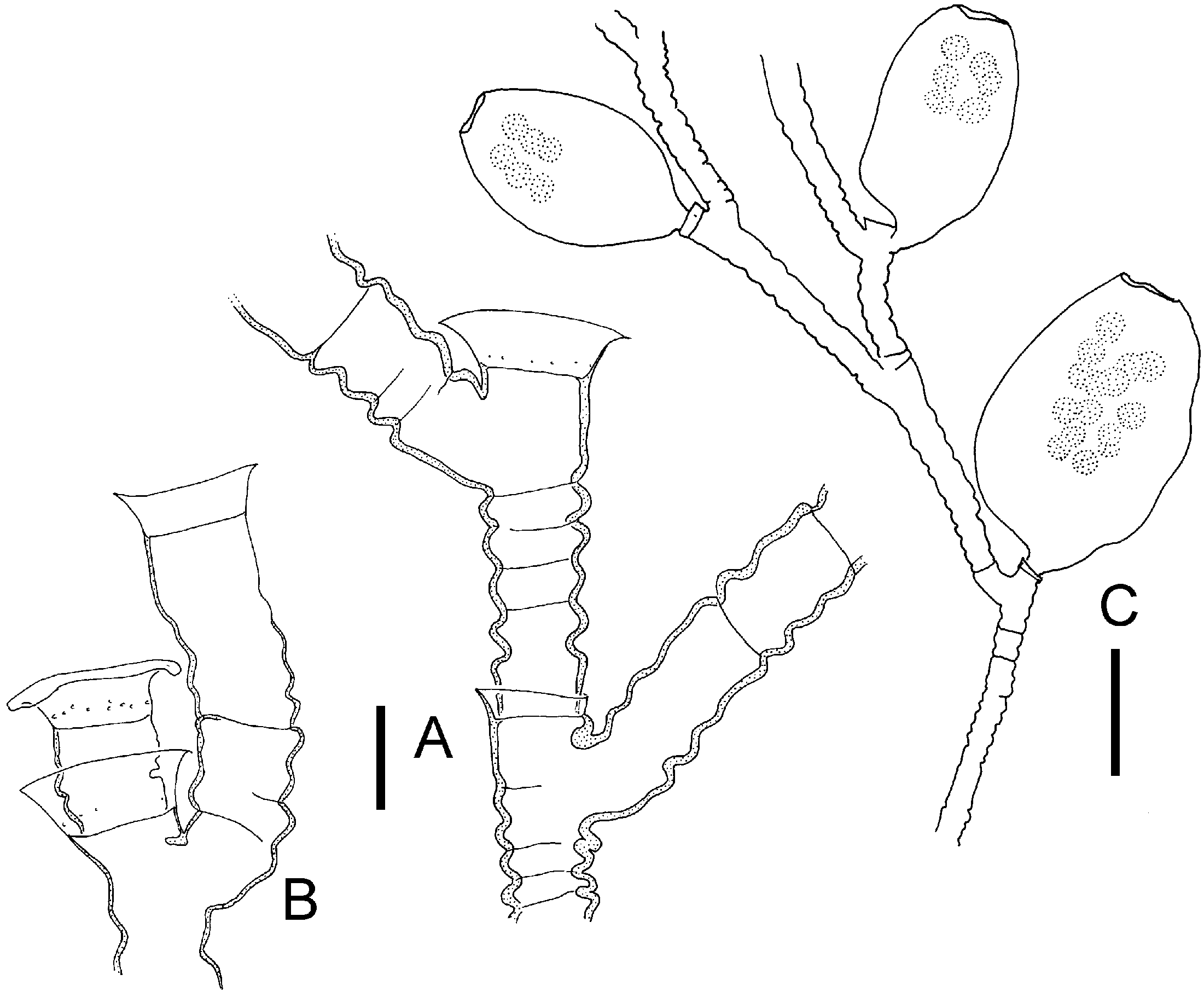