Female genitalia: Not examined. The abdomen is now missing from the single female specimen.

Cocoon. An oblong envelope of white silk, approximately 5–6 mm long and 2–3 mm wide, spun on the underside of a semicircular bark flap cut by the larva at the end of the mine; unadorned or with a cluster of 1–12 or so pearly bubbles near each end ( Figs. 4–6 View FIGURES 3 – 11 ).

Etymology. The specific name is derived from the genus of the host plant, Viburnum   L.

Diagnosis. The forewing pattern is similar to that of several described Marmara   species possessing darkly banded forewings, but M. viburnella   is clearly distinct when larval biology is taken into account. No other species is known both to mine leaves and to pupate under a bark flap cut by the larva at the end of the mine. Further, each of the six species that is reported to pupate under a bark flap, in addition to using hosts belonging to other plant orders, has an adult with distinctly different forewing coloration: the wings of M. auratella Braun   are “bronzy brown, with an almost golden luster under brilliant illumination” ( Braun 1915); those of M. elotella (Busck)   and the three ash feeders are predominantly white ( Busck 1909; Fitzgerald 1973); and those of M. fasciella (Chambers)   are banded with approximately equal parts white and pale brown ( Chambers 1875).

Biology. In Massachusetts, adults emerge in June and early July and deposit eggs on the upper surfaces of leaves of Viburnum   , one egg per leaf, typically over a prominent vein. The sap-feeding larvae hatch in early July and form meandering linear leaf mines, less than 1 mm wide ( Figs. 7–8 View FIGURES 3 – 11 ). The mine is at first epidermal and may appear whitish or like a tiny, shining snail trail, difficult to discern. Before long the mine deepens and becomes pale brown in color, with a very fine, central frass line visible under magnification. Eventually the mine enters the leaf midrib, either directly or by a side vein, and proceeds down the petiole and into the stem. We have found apparently occupied leaf mines in Massachusetts as late as 8 August, and have found completed leaf mines, with larvae already feeding in stems, as early as 19 July in Massachusetts and 30 June in Illinois. Once in the stem, the larva quickly tunnels deeper in the bark, and the mine ( Fig. 9 View FIGURES 3 – 11 ) usually is not externally visible for more than a few cm. Based on the known life histories of other bark-mining Marmara   species, we presume that the larvae overwinter partially grown and finish feeding in the spring. The depth of the bark mine appears to vary throughout development; we have found fragmentary epidermal and deeper bark mines of various sizes, but much of the feeding evidently takes place in the cortex and is not visible on the surface. The mature larva cuts a semicircular flap in the bark ( Fig. 4 View FIGURES 3 – 11 ) and spins its cocoon on the underside of this ( Fig. 6 View FIGURES 3 – 11 ). Although we have found mines extending to within a few cm of the base of the stem, the pupation site tends to be well over 1 m aboveground, on a branch or a portion of the main stem that is less than 1 cm thick and has relatively smooth bark. Upon emergence of the adult ( Figs. 10–11 View FIGURES 3 – 11 ), the pupa is thrust through the cocoon near one end ( Fig. 5 View FIGURES 3 – 11 ).

Parasitoids. Four Quadrastichus Girault   adults ( Hymenoptera   : Eulophidae   : Tetrastichinae   ) emerged from one cocoon. No keys exist for the identification of North American species in this genus, and there are likely numerous undescribed species in addition to the ten known from this continent (C. Hansson, in litt.). Six Ageniaspis Dahlbom   adults ( Encyrtidae   : Encyrtinae   ) emerged from another cocoon, and another 23 emerged from two or more cocoons that were not isolated in separate rearing vials. They do not match any of the species recorded from northeastern North America (R. Zuparko, in litt.).

Remarks. The successful rearing of Marmara viburnella   followed five years of investigation and failed attempts, during which the larval biology was gradually pieced together. The first known leaf mine on Viburnum dentatum   was found on Tuckernuck Island by CSE on 10 September 2011 during a survey of leaf-mining and gallforming insects of Nantucket County, Massachusetts, USA. Additional mines were found on Nantucket Island in August 2012, and since they were observed to proceed down the petioles and into the twigs, several twigs with mined leaves were collected in resealable plastic bags. A single larva appeared in one of the bags, and photographs were shown to DRD and DLW, who agreed that it appeared to be an early instar Marmara   . In June 2013, additional searching of V. dentatum   by CSE and JAB revealed a few old bark mines, but no bark flaps were found and it was presumed that this species exits the mine to pupate after overwintering in the stem or roots. In late July 2014, V. dentatum   plants with leaf mines were marked with pink flagging, and in December, five of these were dug, potted, and kept in an unheated shed over the winter, inside large sleeves of fine-meshed cloth. On 3 March 2015, the plants were brought indoors, and they were checked daily until June for emerging adults. No moths emerged, but on 30 June, CSE and JAB discovered leaf and stem mines with two associated bark flaps on V. dentatum   west of Effingham, Illinois. Thus, in June 2016 CSE and JAB were newly motivated to search for bark flaps on Nantucket Island, and succeeded in collecting approximately 30 that appeared fresh (rejecting numerous others that were from previous years) scattered over five different sites.

The leaf mine of Marmara viburnella   is easily distinguished from other mines occurring on Viburnum   , as no other insect produces a mine that proceeds down the petiole and into the stem. The only other known linear mine on Viburnum   is one found by CSE and JAB on V. edule (Michx.) Raf.   in Washington. This mine was tightly coiled at the beginning, arcing back and forth in an area bounded by two lateral veins; eventually it crossed a vein and stretched out into a typical linear mine. The larva exited through a slit in the upper epidermis at the end of the mine. Frass was deposited in beaded strips along the sides (not in a thin central line as in M. viburnella   ), an arrangement characteristic of Agromyzidae   ( Diptera   ). We presume this mine to be the work of Liriomyza charada Lonsdale   , which has been reared from V. edule   in Alberta ( Lonsdale 2017). The two other known Viburnum   miners are both moths that form blotch mines. Phyllonorycter viburnella (Braun)   ( Gracillariidae   ), which like M. viburnella   is common on V. dentatum   on Nantucket Island, forms an underside tentiform mine in which pupation takes place ( Braun 1923). Coleophora viburniella Clemens   ( Coleophoridae   ) feeds from a portable case, producing full-depth mines that contain no frass. It is recorded from V. nudum   L. var. cassinoides   (L.) Torr. & A. Gray ( McDunnough 1942), V. prunifolium   L. ( Clemens 1861), and V. rufidulum Raf. ( Covell 1999)   , and we have found larvae on V. dentatum   in Vermont.

It is conceivable that Marmara   mines on Viburnum   species other than V. dentatum   represent moths distinct from M. viburnella   , but at this point we have no reason to suspect so. In Berkshire County, Massachusetts, we have found mines on V. lantanoides   in the immediate vicinity of mines on V. dentatum   . 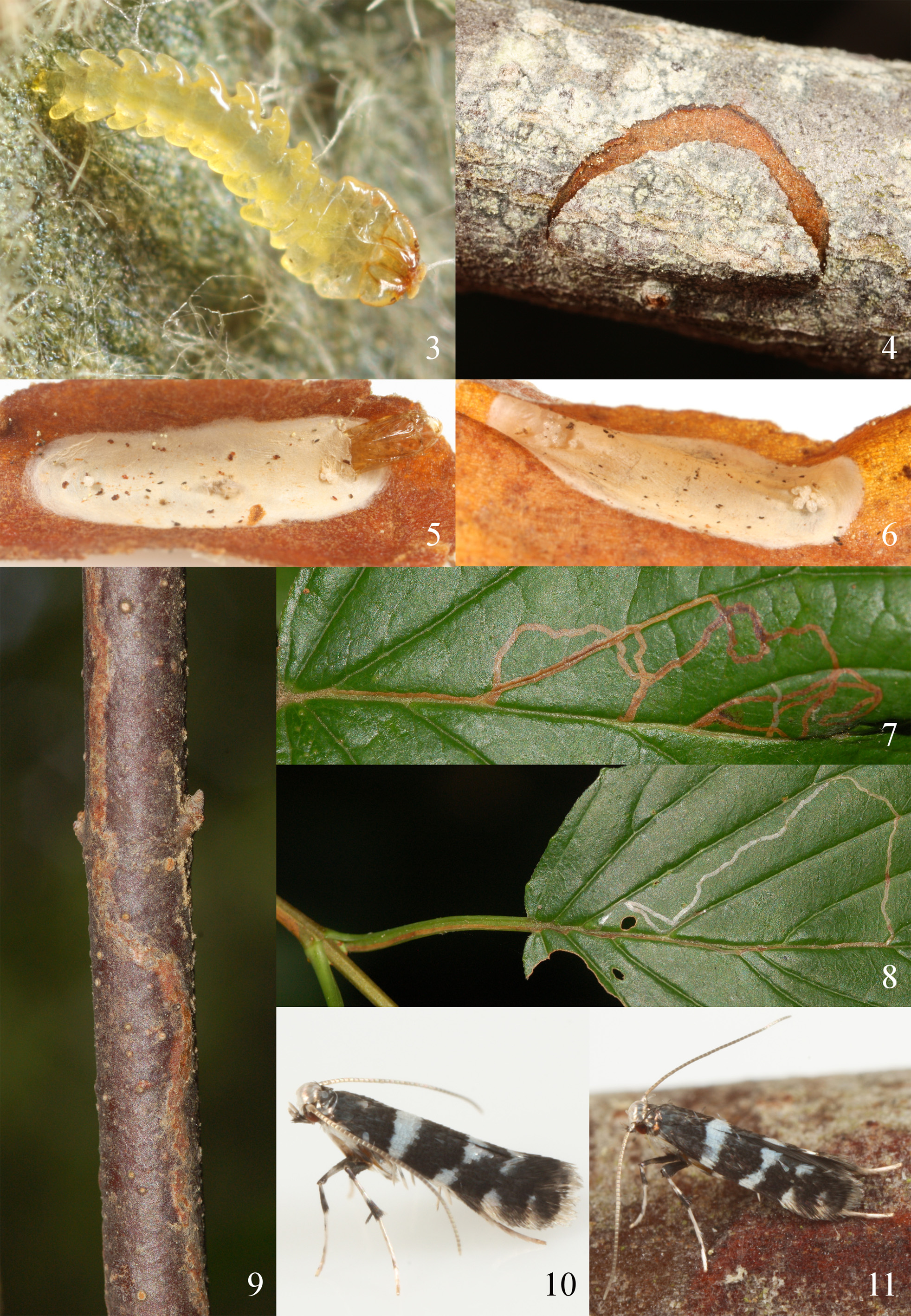 FIGURES 3 – 11. Marmara viburnella. 3, early instar larva; 4, bark flap cut by the larva, under which the cocoon is spun; 5, cocoon of male paratype, with pupal exuviae protruding from right end; 6, cocoon with numerous pearly bubbles, found in Illinois; 7, the first documented leaf mine, from Tuckernuck Island, September 2011; 8, mine tract departing the leaf blade, visible as a brown line in the petiole and twig; 9, bark mine; 10, holotype male; 11, paratype male.

FIGURES 3 – 11. Marmara viburnella. 3, early instar larva; 4, bark flap cut by the larva, under which the cocoon is spun; 5, cocoon of male paratype, with pupal exuviae protruding from right end; 6, cocoon with numerous pearly bubbles, found in Illinois; 7, the first documented leaf mine, from Tuckernuck Island, September 2011; 8, mine tract departing the leaf blade, visible as a brown line in the petiole and twig; 9, bark mine; 10, holotype male; 11, paratype male.