Similar to Lepanthes pachychila   Luer & Hirtz, differing in the taller plants up to 40 cm long (vs. less than 20 cm tall), the petals with narrowly triangular-oblong lobes (vs. lobes triangular), the lip with the blades thin, ovate-oblong, the base rounded and apically acute (vs. lip blade thick, broadly ovate with basal and apically rounded ends) and appendix triangular in dorsal view, with two protuberances on the top and a minute tuft of hairs at the base (vs. minutely bilobulate appendix).

This species was collected in the buffer zone of the Cayambe-Coca National Park on the eastern Imbabura and Pichincha provinces (Fig. 4 View Figure 4 ). The population from Imbabura (Fig. 13 View Figure 13 ) grows in páramo (AsSn01) according to Ministerio del Ambiente del Ecuador (2013) as small groups or isolated individuals that grow on roadside embankments along with other members of Pleurothallidinae   like Draconanthes aberrans   (Schltr.) Luer, Stelis pusilla   , S. lamellata   Lindl., Pleurothallis bivalvis   Lindl. and P. apopsis   Luer. The specimens collected in Pichincha grew in evergreen montane forest (BsAn01)(Fig. 13 View Figure 13 ) according to Ministerio del Ambiente del Ecuador (2013), and unlike the Imbabura population, the plants grow epiphytically at the base of the trunks or on the lower branches of the trees, where they also share their habitat with Stelis pusilla   , S. lamellata   , Pleurothallis bivalvis   and P. apopsis   .

The species has been found in flowers and with fruits at different stages of maturity from May to July, suggesting that reproduction takes place all year round.

The specific epithet honors the Caranqui culture that historically occupied the same areas where this species is distributed.

Lepanthes caranqui   is known from two localities within an extent of occurrence of 575 km2. It inhabits both paramo and montane forest where it is more abundant, forming small colonies on tree trunks. Its habitat is not considered to be under pressure since it is located in the buffer zone of a protected area but a potential threat would be the advance of the agricultural frontier. However, it has been observed that this orchid can adapt to moderately disturbed areas and is able to colonize different types of vegetation. Considering the abundant number of mature individuals observed in the field we estimate an approximate number of 500 mature individual and giving that its area of occupancy, habitat quality and the number of mature individuals are not declining we suggest the Least Concern (LC) category following the IUCN (2012) Red List Categories and Criteria. 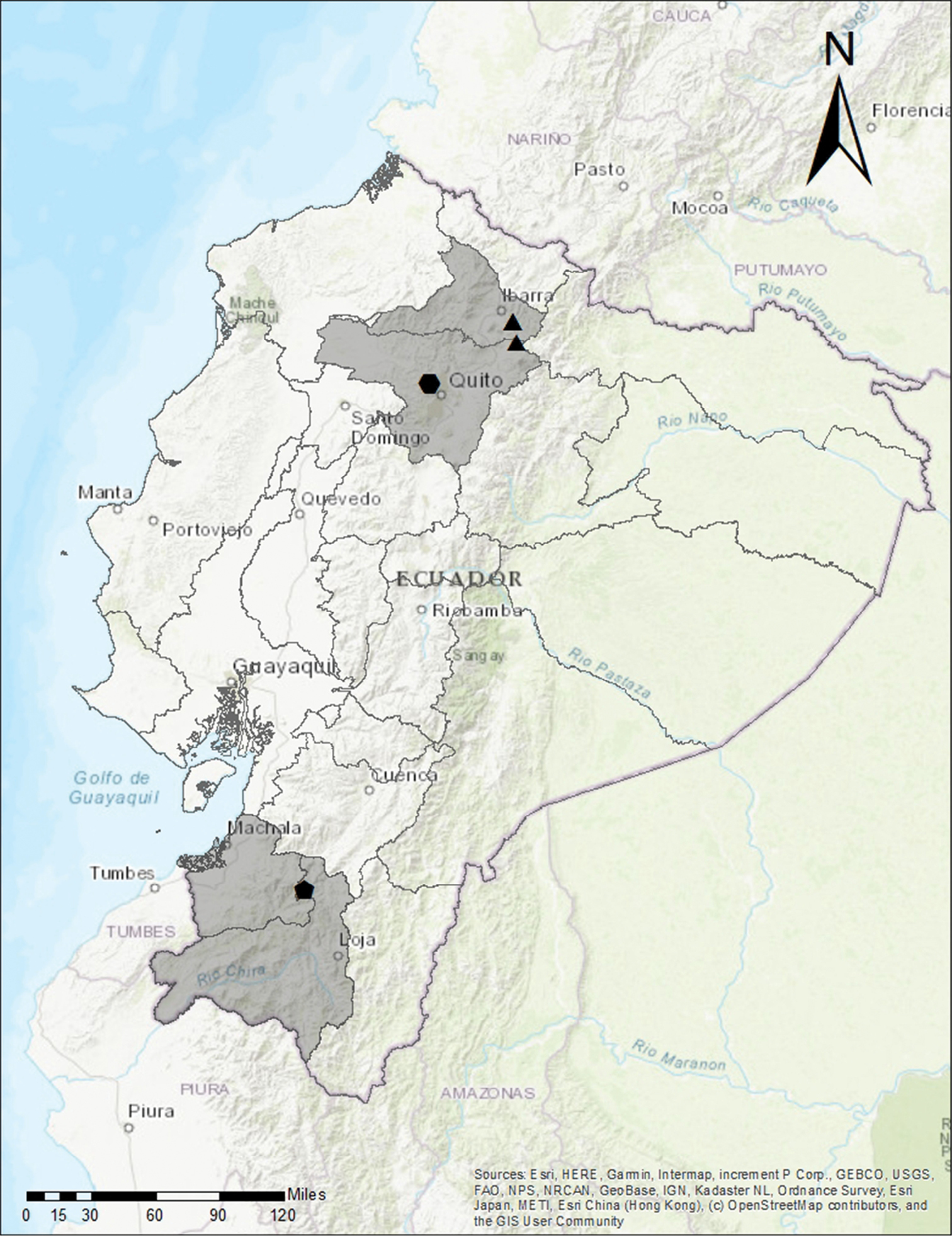 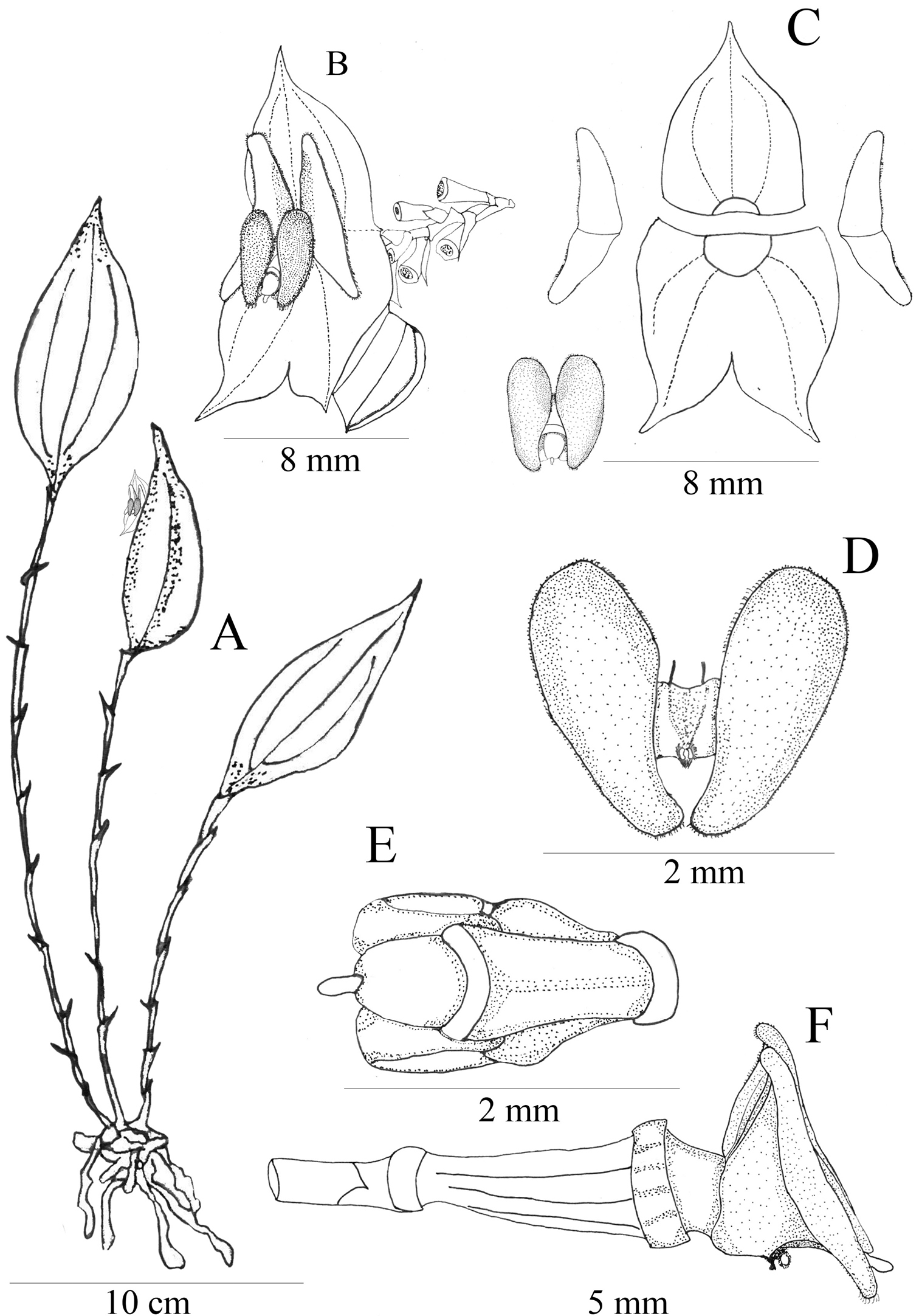 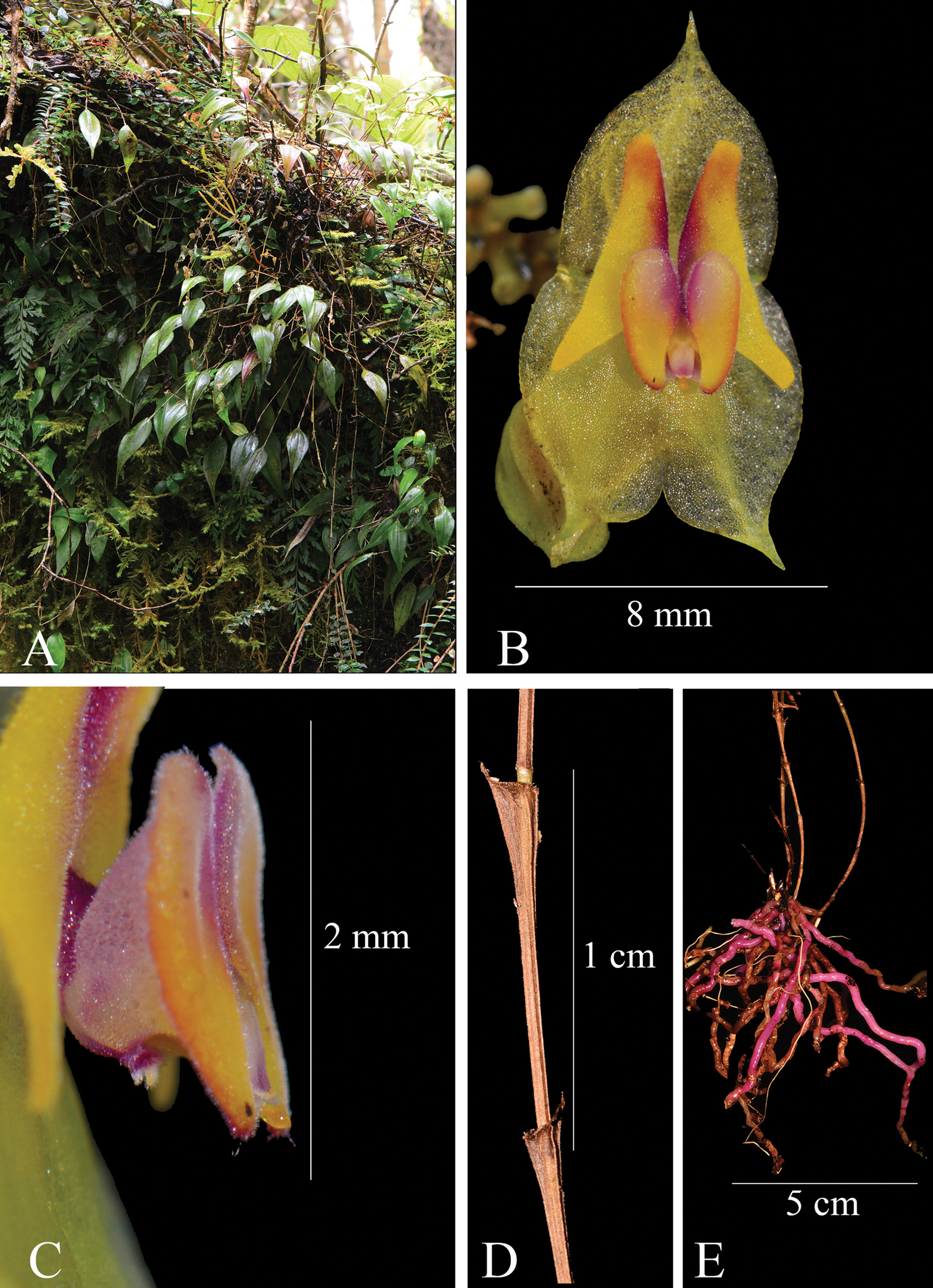 Figure 11. Lepanthes caranqui A plant growing in its natural habitat B front view of the flower C lateral view of the lip showing the apendix D detail of the lepanthiform sheat E roots detail. Photograph by F. Tobar from the plant that served as type (Tobar et al. 3348). 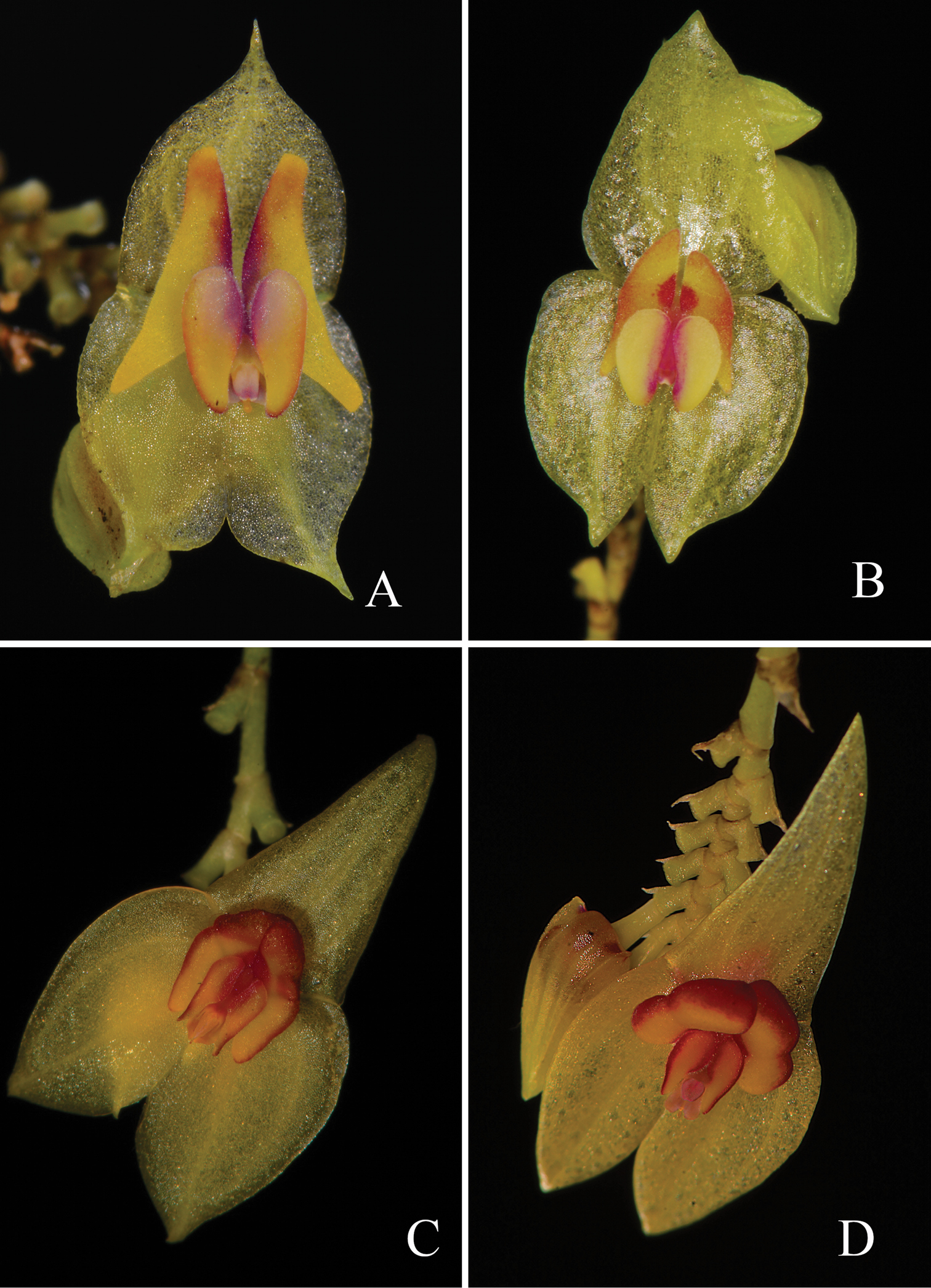 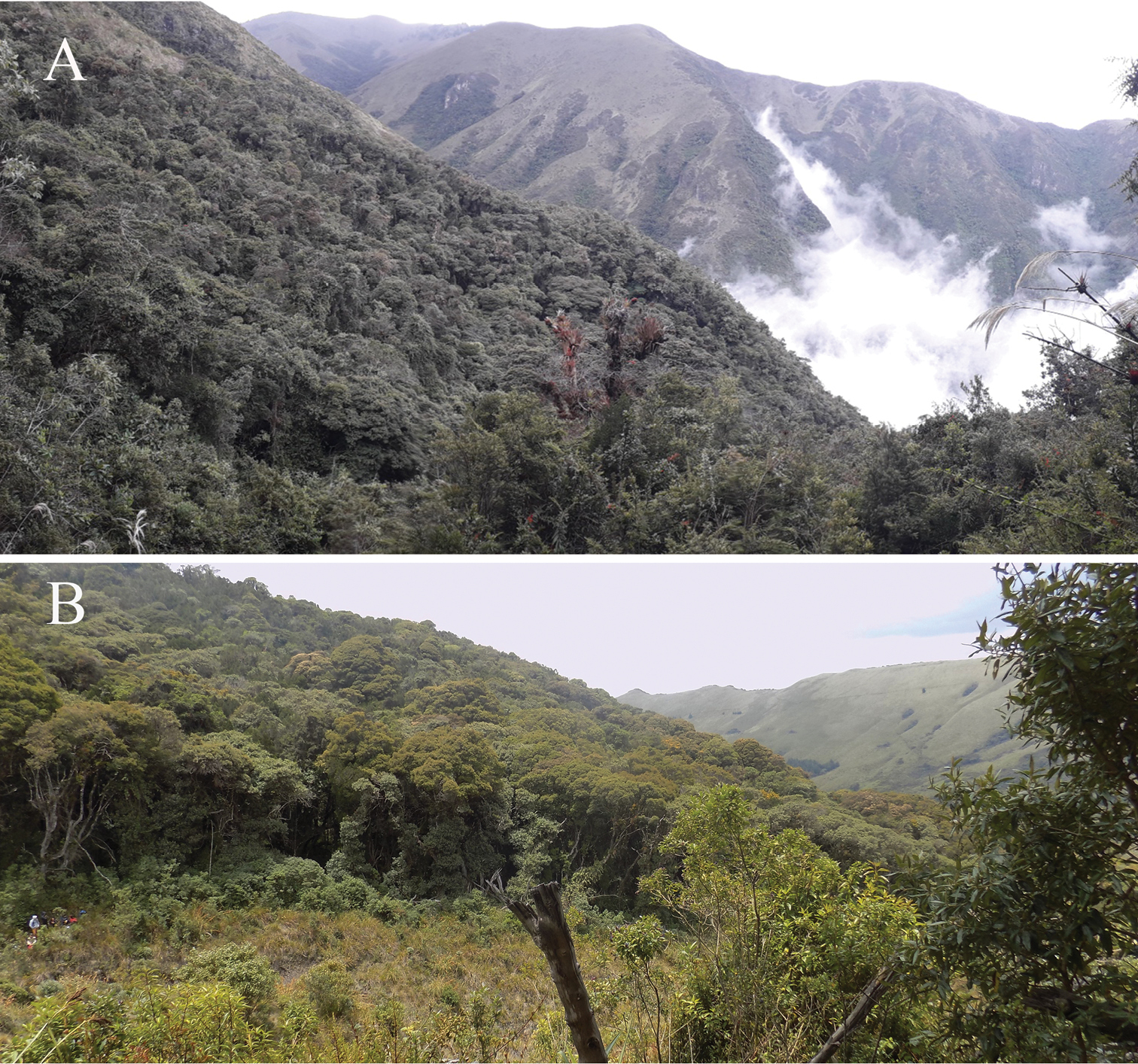