HW projection only poorly developed; a faint orange spot between the R5-M1 veins is present in some specimens; the DFW band generally with five well developed, almost contiguous, crescent-shaped spots ( Fig. 5E View Fig ) (however, there are some specimens with small, sometimes blurred, disjunct spots; cf. Fig. 5F View Fig ); on the VFW, in space Cu2-2A, the inner margin of the distal white stripe forms a projection that does not reach the black border of the proximal white stripe; in the VHW cell the dark brown lines and curved line above the Cu1-Cu2 ocellus are well developed ( Fig. 5E-F View Fig ). The valva axis has no swelling; the dorsal ridge has a row of more than 6 spines, dimimishing towards the extremity ( Fig. 13G View Fig ).

The FWL varies from 58 to 66 mm. Average P = 3.9 (n = 6; cf. Table 3 View Table 3 ); it is possible that there is no significant difference with other populations from the Northern Andes, except E. z. greeneyi   . In some specimens, there is a faint orange spot between the R5-M1 veins, making a very weak projection of the proximal branch of the submarginal band ( Fig. 5E View Fig ); this feature has not been observed in other specimens from the Northern Andes. The DFW band varies from well developed, with five barely contiguous spots, to five small disjunct spots in some specimens, that we consider to be individual variations, like similar specimens from northern Peru, Ecuador and Venezuela. The violet iridescence is a little more pronounced than that of E. z. greeneyi   , but less than in E. z. reyi ssp. nov. and E. z. isabelae ssp. nov. (cf. Fig. 6 View Fig ). The androconial patch is a bright creamy, pale citrus yellow. The background colour of the ventral surface has a lighter yellowish aspect than in E. z. chachapoya ssp. nov. ( Fig. 5E View Fig ). On the VFW, the isolated white spot in the cell is medium to large, with a variable, roughly oval, triangular or crescent-like shape; there is sometimes a small white spot in the angle formed by the cubital vein and Cu2 ( Fig. 5E-F View Fig ); in space Cu2-2A, the inner margin of the distal white stripe forms a projection that does not reach the black border of the proximal white stripe, and is often less pronounced than in E. z. greeneyi   ( Fig. 5E-F View Fig ). On the VHW, the white stripes extend far beyond the Cu1-Cu2 ocellus, notably the distal one, which reaches vein 2A; in the cell, the dark brown lines and curved line above the Cu1-Cu2 ocellus are well developed; the costal VHW ocellus has an incomplete pale circle, sometimes partially covered with white scales; the black ring is complete and sometimes thicker than in any other subspecies ( Fig. 5E-F View Fig ). The VHW Cu1-Cu2 ocellus (Φ average value: 10.7 mm; n = 6; cf. Table 5 View Table 5 ) is larger, on the average, than that of E. z. greeneyi   and E. z. reyi ssp. nov., and much larger than in E. z. isabelae ssp. nov. Genitalia exhibit weak individual variations ( Fig. 13G-I View Fig ). The valva is regular, without a swelling; the ridge bears a row of more than 6 spines, the size of which varies more or less regularly; the gnathos is larger than those in E. z. zolvizora   , and sometimes smaller than in E. z. chachapoya ssp. nov.

Only 6 females are known (labelled from ‘Calima Valley, Cauca River’; Calima, 45km W of Buga; Río Agua; ‘Rio Aguatal’; Colombia Ost; and ‘Colombie’). The FWL varies from 66 to 70 mm. The diagnostic characters correspond to those of the males ( Fig. 7F View Fig ). On the dorsal surface, the FW band is composed of five narrow crescentic orange spots that just touch each other (the band is slightly narrower than that of most E. z. greeneyi   females). There is the faintest hint of a sixth orange spot between the R5-M1 nerves ( Fig. 7F View Fig ). There is a strong purplish sheen in the middle of both the FW and HW. As in the male, on the VFW, in space Cu2-2A, the inner margin of the distal white stripe forms a projection that does not reach the black border of the proximal white stripe (an exception is the female from Río Aguacatal), unlike in E. z. reyi ssp. nov. and E. z. isabelae ssp. nov. The dorsal branches of the inward projections of the sterigma have a regular outline, in this way being different from E. z. greeneyi   and more similar to E. z. chachapoya ssp. nov., but their extremities are notably less distant from the internal side of the arch than in females from northern Peru ( Fig. 15K View Fig ); nevertheless, the differences with one of the E. z. chachapoya ssp. nov. females (cf. Fig. 15H View Fig ) are weak. Female genitalia of E. z. opimus   do differ markedly from those of other Northern Andean females, except one female of E. z. reyi ssp. nov. which has thicker inward projections and shorter dorsal branches (cf. Fig. 15L View Fig ).

The only ten dates that we have are from May to November.

The taxon E. opimus   was described by Staudinger (1887), on the basis of three syntypes (males), two from Manizales ( Colombia) and one from Chanchamayo ( Peru). After Stichel (1904), it was considered as a subspecies of E. zolvizora   , until Penz (2008) revised its status. The name opimus   has always been used for Colombian specimens ( Stichel 1904, 1909, 1932; Fruhstorfer 1912; Fassl 1914, 1915 a, 1915b; D’Abrera 1987). Staudinger noted differences between the Peruvian syntypic specimen and the Colombian ones. It should be noted that none of the syntypes match the figured specimen (fig. 36) in Stichel (1909). To stabilize the situation, we have designated as lectotype the undamaged Manizales syntype. The other Manizales specimen is therefore a paralectotype. As indicated previously, it is likely that the syntype from Chanchamayo belongs to E. z. chachapoya ssp. nov. 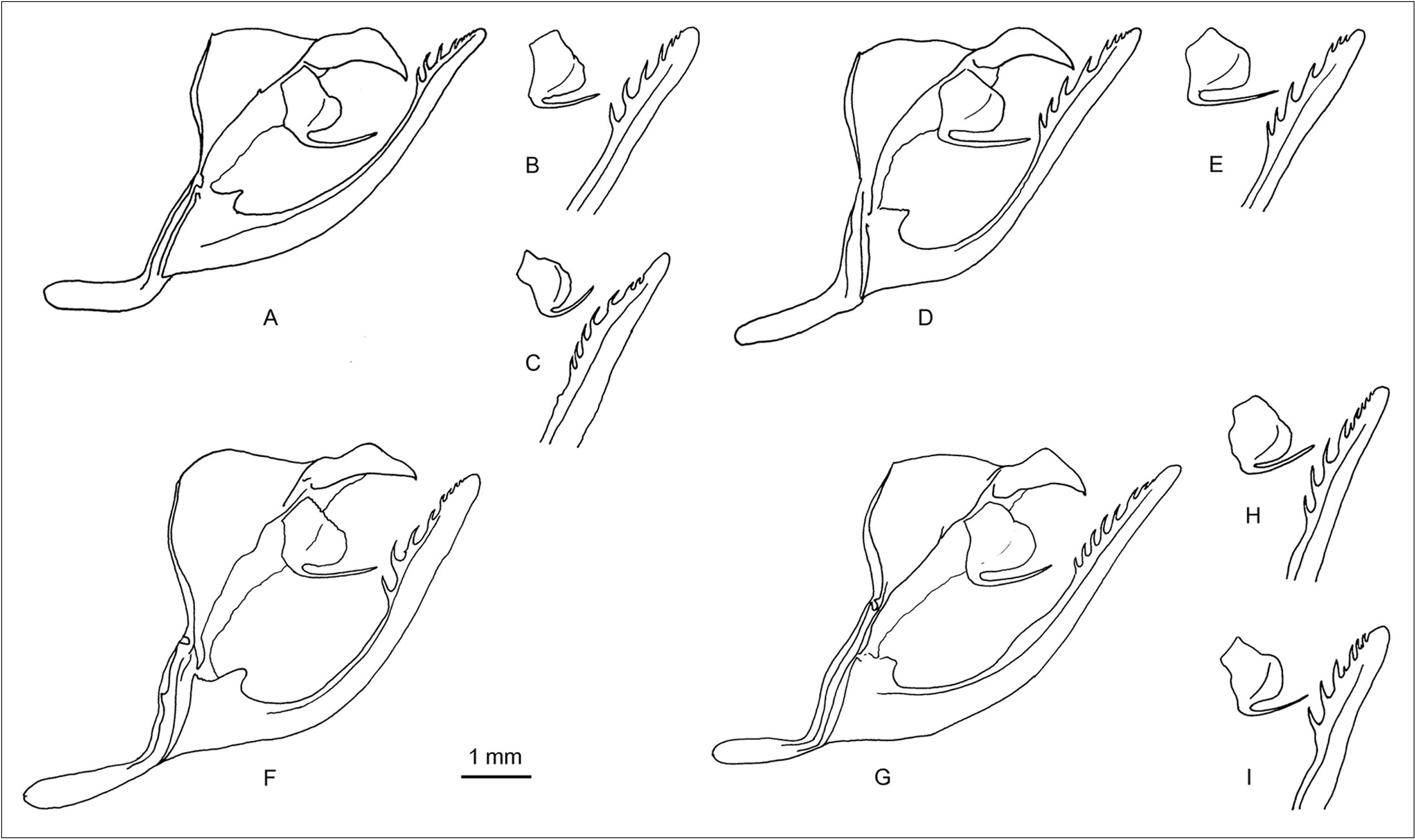 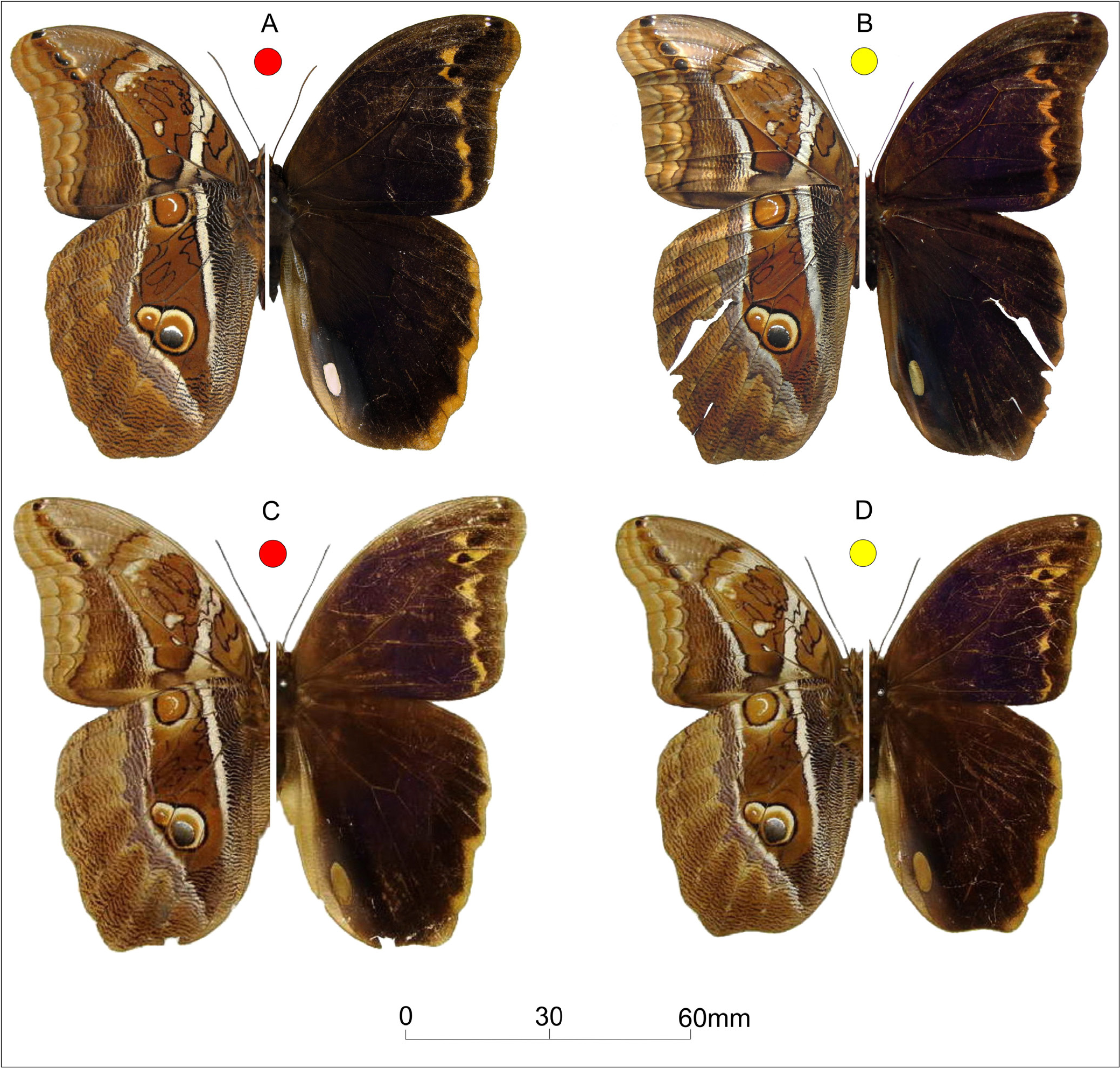