Gonads on radial canals, developing in small transparent clusters at junction of radial canal with ring canal and at manubrium, but not completely extending along canals, each developing cluster with internal luminescent green spots, the spots becoming separated and fading as gonad matures. Measurements of Gonionemus agilis   are given in Table 1.

The maximum likelihood and Bayesian phylogenetic analyses were generally consistent with each other and similar to Collins et al. (2008). Gonionemus agilis   grouped in a clade that was highly supported in the Bayesian analysis but not in the ML analysis and that included Cubaia   , Gonionemus   and Scolionema   ( Fig. 3 View FIGURE 3 ), which fell within another strongly supported clade that included Aglauropsis aeora Mills, Rees & Hand, 1976   . The Olindias   group formed another strongly supported clade, as did the geryoniids, and a group including Maeotias   , Limnocnida   , Craspedacusta   , and Astrohydra   . However, the arrangement of these clades relative to each other is not well-supported.

Remarks. T here are three accepted species of Gonionemus   (see Schuchert 2013): G. vertens A. Agassiz, 1862   , G. chekiangensis Ling, 1937   and G. hamatus Kramp, 1965   . G, vertens   is a variable species with a reputation for painful stings in certain populations and is widely distributed in the northern hemisphere ( Arai & Brinckmann-Voss 1980, Govindarajan & Carman 2016). Based on mitochondrial COI sequences and morphological observations, the western Pacific and western Atlantic populations that are associated with stings may represent a distinct species referred to here as Gonionemus   sp. (see Govindarajan et al., 2017). G. vertens   has been recently recorded from Argentina in the southern hemisphere where it is assumed to have been anthropogenically introduced ( Rodriguez et al. 2014), G. chekiangensis   recorded from the northern Pacific is a much larger species than G. agilis   (see Xu et al. 2014) and G. hamatus   has been found only once in southern Australia where it is known from one specimen captured in 1961 in the plankton at Adelaide, South Australia. Attempted rehabilitation of the dehydrated holotype specimen ( SAM H143, loaned by the South Australian Museum) was unsuccessful. The specimen is flattened and the contents of the bell degraded, however enough of one tentacle remained to show the nematocysts are arranged in circumferential bands as described by Kramp (1965).

Gonionemus agilis   differs in the following morphological respects from known species of Gonionemus   :

(i) Location of adhesive pads. In both G. vertens   and G. chekiangensis   the adhesive pads are not at the tips but further up the tentacles. Kramp (1965) described the pads of G. hamatus   as being at the tip of the tentacles. (ii) Distribution of tentacular nematocysts. In G. agilis   they are not arranged in circumferential bands as described for the other three species but are in scattered discrete clusters or arcuate pads.

(iii) Morphology of gonads. All other species of Gonionemus   are reported to have gonads folded in a zig-zag pattern along their entire length. In various stages of maturity those of G. agilis   showed no evidence of extending completely along the radial canals and only a few specimens showed incipient zig-zag folding of the clusters just above the ring canal.

Statocysts are very difficult to find in G. vertens   ( Thomas 1921, Brinckmann-Voss pers. comm.). Statocysts may also be an incipient structure in Gonionemus agilis   as examination (x 1000) of several crushed specimens found only a few spherical bodies (c. 15 µm diameter) believed to be statocysts. Yet another specimen (see Fig. 1C View FIGURE 1 ) clearly showed statocysts between some of the tentacle bases.

Green luminescent spots at the junction of the radial canal with the ring canal were mentioned by Ling (1937) in his description of G. chekiangensis   . It has not been reported by other authors. In G. agilis   the brilliant transparent green spots are in clusters in the earliest developing gonads at the ring canal and manubrium and are sometimes visible along the radial canals as the gonads mature.

The living medusa is very active, the tentacles reacting immediately to touch and the terminal adhesive pad is in constant waving motion. The manubrium is very extensile, changing shape and sweeping well beyond the umbrella margin when the bell is flattened. The lips are in constant motion, rapidly changing shape from quadrate to fluted and swastika shapes.

Medusae collected in May, 2014 were kept in a laboratory dish for 25 hours during which time they remained immobile with tentacles extended. When a small branch of Cystophora   was placed in the dish the tentacles became very active, the adhesive pads grasping the alga, the medusa then scrambling onto the alga with which it closely blended in colour. The association of the crawling G. agilis   with Cystophora monilifera   is of interest since Schuchert (1996) recorded another crawling medusa, Staurocladia wellingtoni Schuchert, 1996   from Cystophora   in New Zealand.

Gonionemus agilis   may possibly be conspecific with Gonionemus hamatus   as they are both from southern Australian localities separated by 1,200 km of coastline. The degraded condition of the type specimen and lack of detail in Kramp’s figures of G. hamatus   preclude more detailed comparison. Thus for the present and until more material is found in the Adelaide region, G. agilis   is considered a distinct species.

The relatively large genetic distances between G. agilis   and other species of Gonionemus   for 16S (~10%) and COI (~15%) indicate that both of these markers will be useful for DNA barcoding. In general, one of the limitations of DNA barcoding is that barcode sequences are still not available for most species ( Bucklin et al. 2011). By providing DNA barcode sequences as part of a formal taxonomic description, accurate barcode-based taxonomic assignment is ensured ( Dayrat 2005). 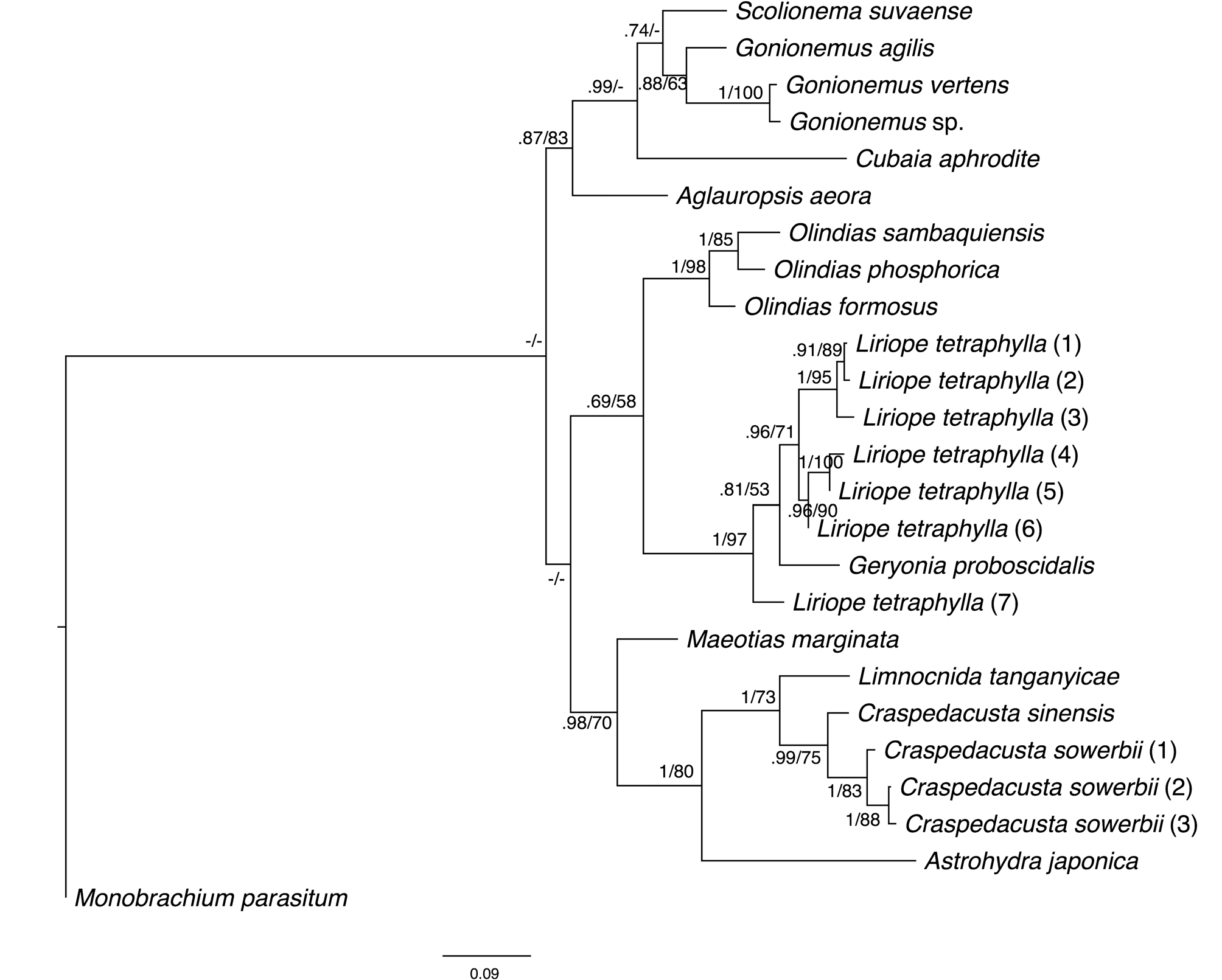 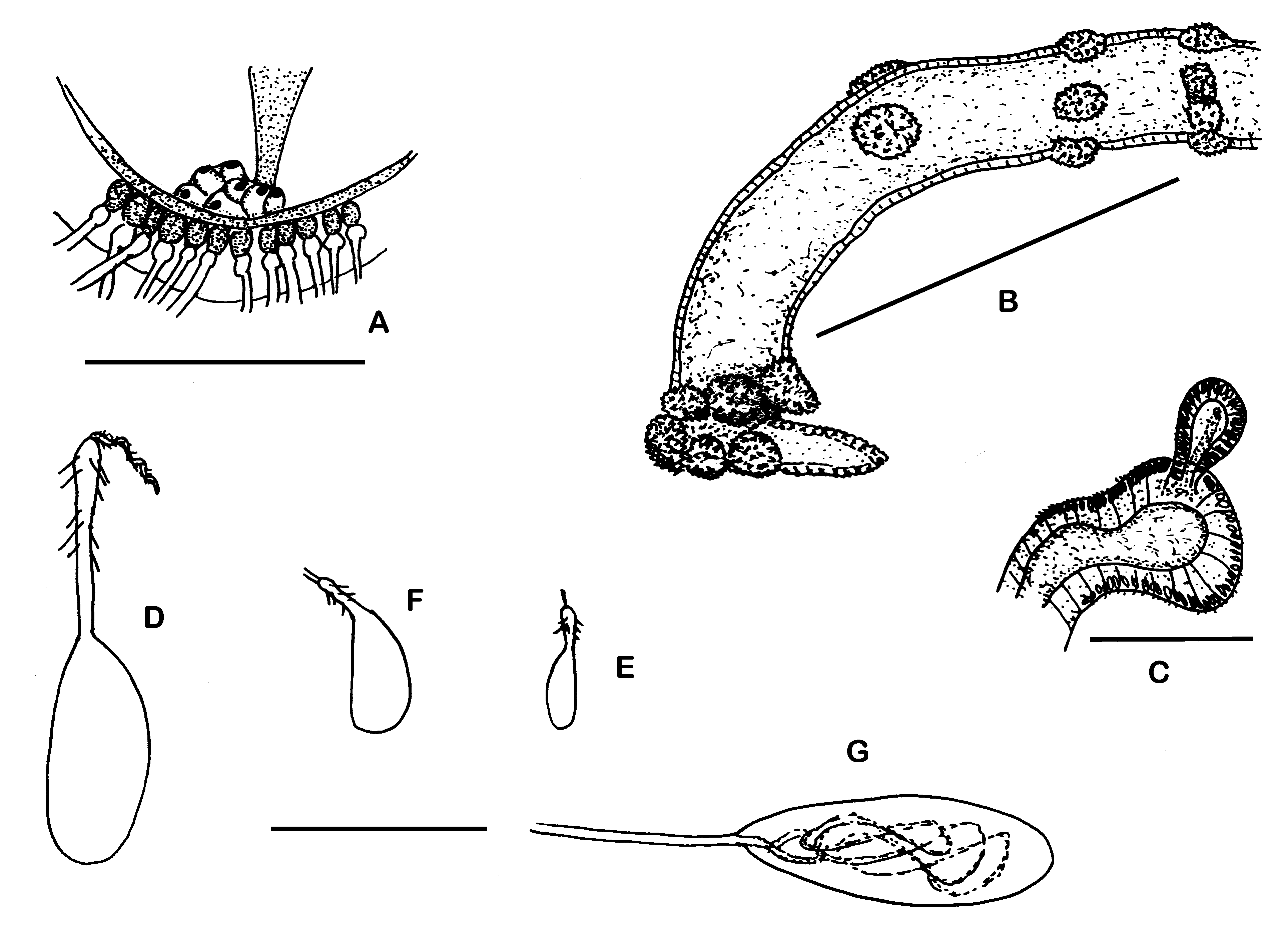