Diagnosis. A species of Trimma   with the posterior one quarter or less of the predorsal midline scaled, these scales usually overlapping rows from either side rather than centred on the midline; a relatively broad bony interorbital (about pupil diameter in width); 14–15 pectoral-fin rays with the upper three and lower 2–3 unbranched; multiple, sequential branches to the first four pelvic-fin rays (up to five branch points, six branch tips); 3–4 + 14–15 = 17–19 gill rakers on the outer face of the first gill arch; a forked caudal fin ( Fig. 16 View FIGURE 16 ); ventral half of body translucent yellow-orange to red in life, pale above; body uniformly straw-coloured in preservative with darker diffuse saddles across the dorsum.

Description. The following description is taken mostly from Winterbottom (1984), with corrections made for differences in methodology, omissions and errors in text and figure derived from 10 (of 60) specimens from Helen Reef, Palau ( ROM 83303 View Materials , 10(21.1–23.6), because of the paucity of Australian material of this species.

Etymology. Named for Douglass F. Hoese, co-author of this paper, in recognition of his many contributions to gobioid systematics.

Distribution. The species has been collected at Cocos (Keeling) Ids, and photographed at the Maldives, the only other Indian Ocean localities beside the type locality at the Chagos Archipelago. We have examined preserved material from off Timor and the Moluccas, the Philippines, Palau, Raja Ampat, Papua New Guinea, New Britain and the Solomon Islands in the western Pacific ( Fig. 15 View FIGURE 15 ).

Comparisons. Trimma hoesei   is unique among members of the genus in possessing a forked caudal fin ( Fig. 16 View FIGURE 16 ). It differs from all other species of Trimma   with a broad, bony interorbital except T. taylori   in having the first four pelvic-fin rays with 3–4 sequential branches (as opposed to a single sequential branch). It differs further from T. taylori   in that the second and third dorsal spines are elongated in both sexes (elongated only in males of T. taylori   ), and in having only a single expanded haemal arch (vs. 4–5 expanded haemal arches—see Winterbottom, 1984, fig. 26). See Comparisons section of T. taylori   for further differences.

This species has been collected infrequently, and the largest lots came from well-developed caves in a vertical wall at about 40 m in the Chagos Archipelago and from similar caves at 27m at Helen Reef, Palau. G. R. Allen provided us with a photograph of a pair of T. hoesei   spawning on an alcyonarian coral that was taken in Milne Bay, PNG at a depth of 15 m. The species is probably more widely distributed in the Indo-west Pacific (sensu Winterbottom et al., 1989) than current records indicate.

Trimma hoesei   is normally found on drop-offs in depths of 20– 50 m. In Australia, it is known only from single specimens from the southern Great Barrier Reef and from Cocos (Keeling) Islands. 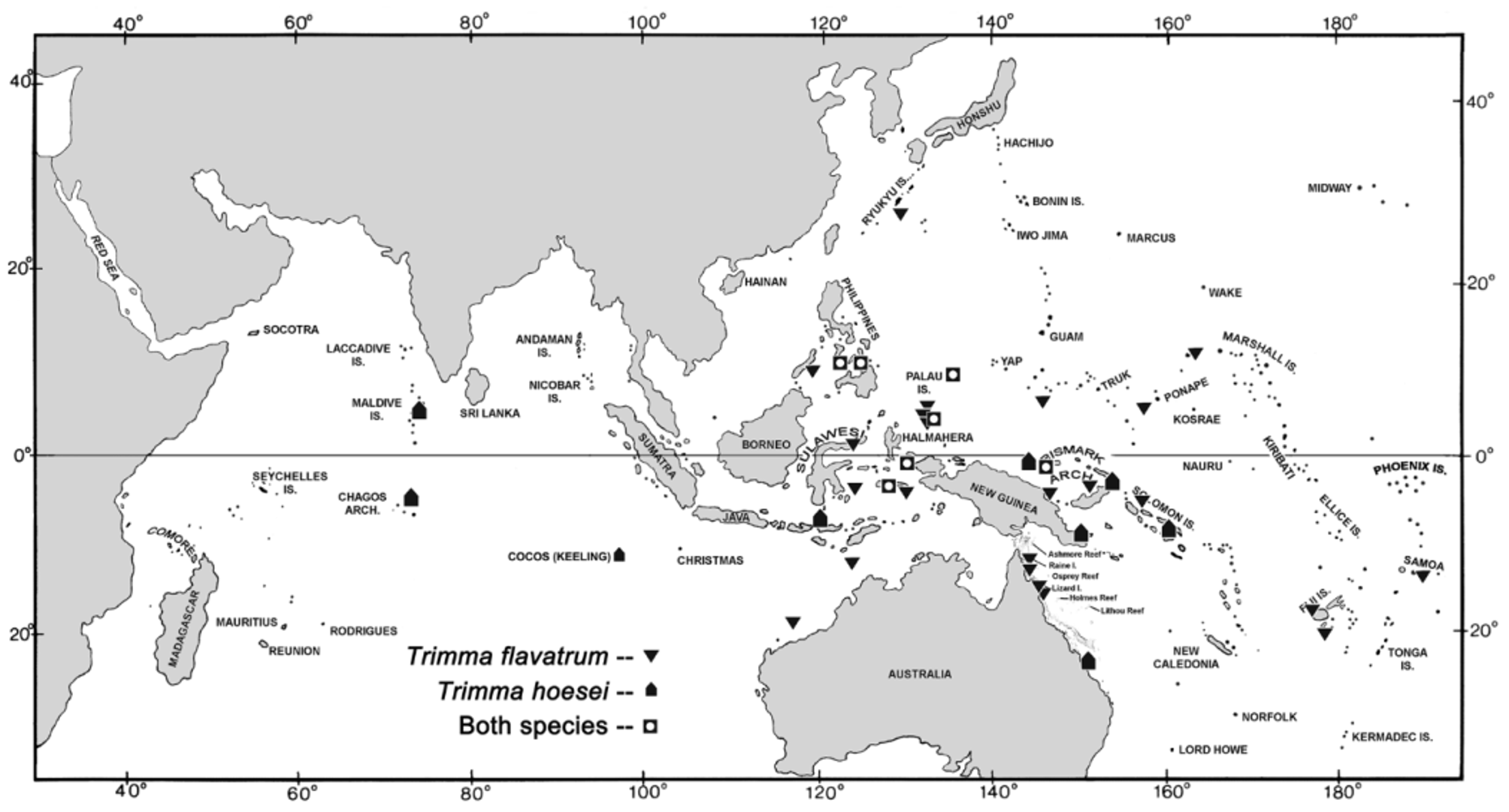 FIGURE 15. Map of the distributions of Trimma flavatrum (solid inverted triangles) and T. hoesei (solid pentagons). A solid square with a white center indicates localities at which both species occur.