Material. Sixty-nine specimens, 9.1–19.3 mm SL, Comores, Western Indian Ocean to Easter Island, Eastern Pacific Ocean. This species has not been redescribed in any detail since its original description, so we provide fuller details of the material we have examined.

Diagnosis. A species of Trimma   with 7 dorsal- and anal-fin rays; 18–20 pectoral-fin rays with the lower 6–9 thickened relative to the upper rays; fifth pelvic-fin ray as long or slightly longer than fourth; a pelvic fraenum and full basal membrane; a row of small, vertically-oriented, ctenoid scales along the median dorsal half of each orbital rim; first dorsal fin with a black margin; and prepelvic region scaleless.

Description. The description is based on all specimens that were in reasonable enough condition for the characters to be recorded (thus the number of specimens used for each character varies) irrespective of the collection locality. Dorsal fins VI + I 7, no spines elongated, third and fourth reaching to first element of seconddorsal fin when adpressed, first ray branched or unbranched, all remaining rays branched; anal fin I 7 (once I 6), all rays unbranched except for posterior half of last ray, which may be branched; pectoral-fin rays 18–20 (mean = 19.0), dorsalmost 2–3 rays unbranched, followed by 6–10 branched rays (lowest numbers in smaller specimens) and 6–9 unbranched and slightly thickened rays; pelvic fin I 5, first four rays branched 2–4 times sequentially, fifth ray slightly longer than fourth and reaching to between urogenital papilla and anal-fin origin posteriorly, branched 3 times dichotomously (i.e. eight terminal tips); full basal membrane and complete fraenum. Lateral scales 23 (once 24); transverse scales 7 (once 6.5); up to 5 horizontal rows of ctenoid scales present on opercle, with 1–5 scales per row (higher numbers dorsally, lower numbers ventrally); usually a single cycloid scale on cheek; medial bony margin of upper half of orbital trenches with about 10, vertical, small ctenoid scales in row on each side from posterior nares to sphenotic area; 5–10 cycloid predorsal scales in midline (lower numbers in smaller specimens) which may reach interorbital trough in larger specimens but end anteriorly at level of posterior margin of eye in smaller specimens; 3–4 cycloid scales in vertical row on base of pectoral fin, ventral one-fifth of pectoral-fin base and breast scaleless, remainder of body covered with ctenoid scales. Teeth in outer row of upper jaw and inner and outer rows of lower jaw of spaced, enlarged, curved canines, with irregular rows of small conical teeth in between. Tongue truncate, two-thirds pupil diameter in width. Gill opening extending to anterior margin of pupil; outer rakers of first gill arch 1–4 + 14–16. Nasal apparatus confined to posterior half of snout, anterior and posterior nares in short tubes, posterior margin of posterior tube adnate to anterior margin of fleshy orbit. Interorbital trough well-developed, posterodorsal trough weakly developed or absent; bony interorbital equal to about one quarter pupil diameter, epaxial musculature just to or not quite reaching level of posterior margin of eye in dorsal midline. Vertebral pattern essentially Type B, but differs from usual arrangement in having only one haemal canal opening in first caudal vertebra of single specimen examined.

Etymology. From “ unisquame   = (L.) one scale, in reference to the single cheek scale.” ( Gosline 1959: 71). The etymology as given in the original description implies that Gosline intended the specific name to be a noun in apposition, however, the Latin noun for scale is squama and squamis literally means with scale, indicating an adjective. The word therefore takes the neuter adjectival ending, and Trimma unisquame   is used here.

Distribution. The species is rather rare in collections, and has primarily been collected south of the equator. The exceptions are the samples from Hawaii (the type locality) and the single collection from Ifaluk Atoll in Micronesia ( Fig. 50 View FIGURE 50 ).

Comparisons. Only one other species of Trimma   ( T. fraena Winterbottom, 1984   ) possesses a pelvic fraenum. This species, and all others in the genus, lack the deep, scale-lined interorbital trench, and almost all (except T. corallinum   and T. omanensis   ) also possess prepelvic (= breast) scales. The presence of 7 dorsal- and 6–7 anal-fin rays is also rarely encountered in Trimma   .

No specimens were available for genetic analysis.

Discussion. This is the most widely distributed species of Trimma   , but is seldom taken in any significant numbers. Some variation is apparent, with the dark vertical bar across the end of the hypural plate being well developed in Pacific plate populations, but poorly developed in populations from Fiji westward. A different pattern of variation may occur in pectoral-fin ray number, where Indian Ocean specimens have a mean of 18.4 (n = 9) as opposed to a mean of 19.2 (n = 22) for west-central Pacific specimens. Given the non-congruence of these two variation patterns, no further systematic action is planned at this time. 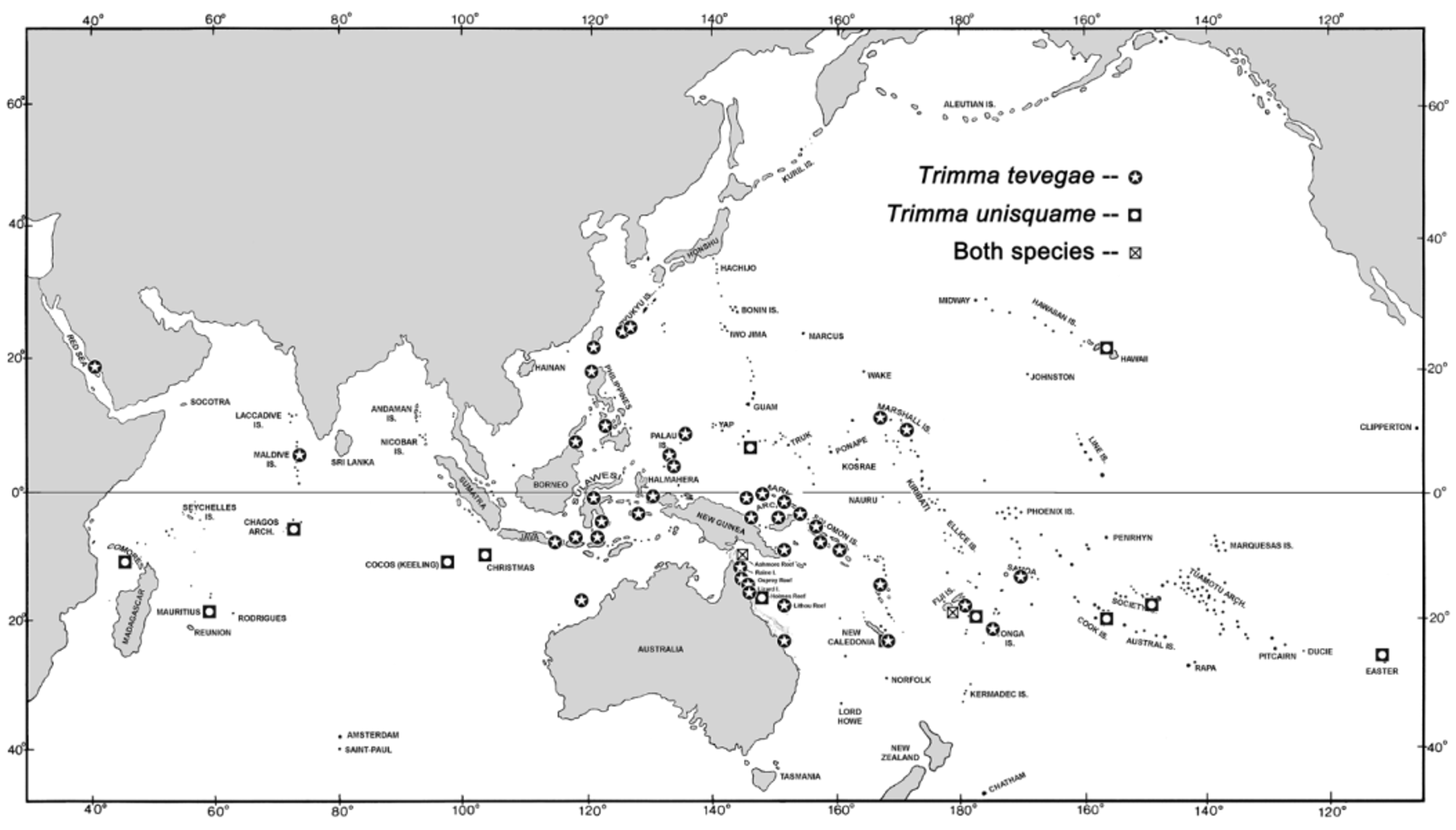 FIGURE 50. Distribution map for Trimma tevegae (solid circles with white stars) and T. unisquame (solid squares with white circles). A hollow square with an X indicates localities at which both species occur.

FIGURE 50. Distribution map for Trimma tevegae (solid circles with white stars) and T. unisquame (solid squares with white circles). A hollow square with an X indicates localities at which both species occur.