Etymology: Named in honour of John Olive who collected the majority of specimens.

Male ( Figs 1, 3–6, 8–10 View Figs 1–3 View Figs 4–10 ): The head, thorax and abdomen are extensively “dusted” with a fine, white, waxy exudation, both above and below. Traces of this “dusting” can also be found scattered along the larger wing veins.

Head light to mid brown, variable between individuals; vertex with a black fascia of irregular width from eye to eye, surrounding each ocellus and branching to each supraantennal plate; front of head with a narrow black fascia from eye to base of antenna and a short extension that follows postclypeal margin; anterior margin of eye socket finely edged black; anterior and posterior cranial depressions black; supra-antennal plates yellow along anterior margin. Postclypeus light brown, black along transverse grooves, in central part of depressed midline and at either side of “top”. Anteclypeus light brown with partly black rim and a large black patch along midline. Lorum light brown with partly glossy black margin. Rostrum pale brown, reaching beyond hind coxae; labium becoming black apically.Antennae dark brown, tending black in parts.

Thorax ( Figs 1–3 View Figs 1–3 ) light brown with black markings, pronotal collar olive green on fresh specimens with fine black edge to lateral margins. Pronotum with a pair of narrow black fasciae that are flanged at each end, one of these either side of midline; paramedian and lateral fissures marked with black; ambient fissure narrowly edged black. Mesonotum with submedian sigilla outlined black; outer margins of lateral sigilla black; ill-defined black markings at base of inner margin of lateral sigilla and between apices of submedian sigilla and cruciform elevation; black along wing groove; a black spot across each anterior arm of cruciform elevation before distal end; scutal depressions black. Metanotum black with distal rim light brown.

Legs pale to light brown; usually with indistinct longitudinal black fascia most obvious on fore legs; fore coxae often with either end partly rimmed black; fore trochanter often with a black blotch on shortest length; femora with a small black spot either side at distal end; tibiae usually with a black spot either side at proximal end and distal end usually with some black of variable extent; tarsi black at distal end, especially so on fore and mid tarsi; pretarsal claws black on apical half, dark brown on basal half. Meracanthus partly black basally, spur light brown.

Female ( Fig. 2 View Figs 1–3 ): Similar to male. Abdominal segment 9 brown with a pair of black subdorsal fasciae parallel with abdominal midline reaching a little over half way to dorsal beak, each fascia extended laterally to ventral surface along anterior margin of abdominal segment 9; sometimes a pair of small, curved fascia between distal ends of subdorsal fascia.

Song ( Fig. 11 View Fig ): Ewart (1993, 2005) described and analyzed the song and provided waveform plots for specimens from Heathlands. He noted that periods of singing for four individuals lasted 12, 17, 18 and 25 minutes respectively. To the human ear the song has a buzzing quality, uninterrupted and without variation. As noted by Ewart the song actually consists of a sequence of rapid single pulses. These pulses are extremely short, each only about 1 ms in duration.

Ewart measured the pulse rate at some 130 per second with a frequency lying between 6 and 8 kHz. A recording of a specimen from north of Cooktown made by David Marshall ( Fig. 11 View Fig ) showed a pulse rate of 120 per second with the majority of sound energy in the range 5–8 kHz with dominant frequencies between 6 and 6.5 kHz. Differences between the recordings of Ewart and Marshall are most likely due to differences in temperature (pulse rate) and individual variation (frequency).

The species is unusual for a large cicada in that it has no alarm call. 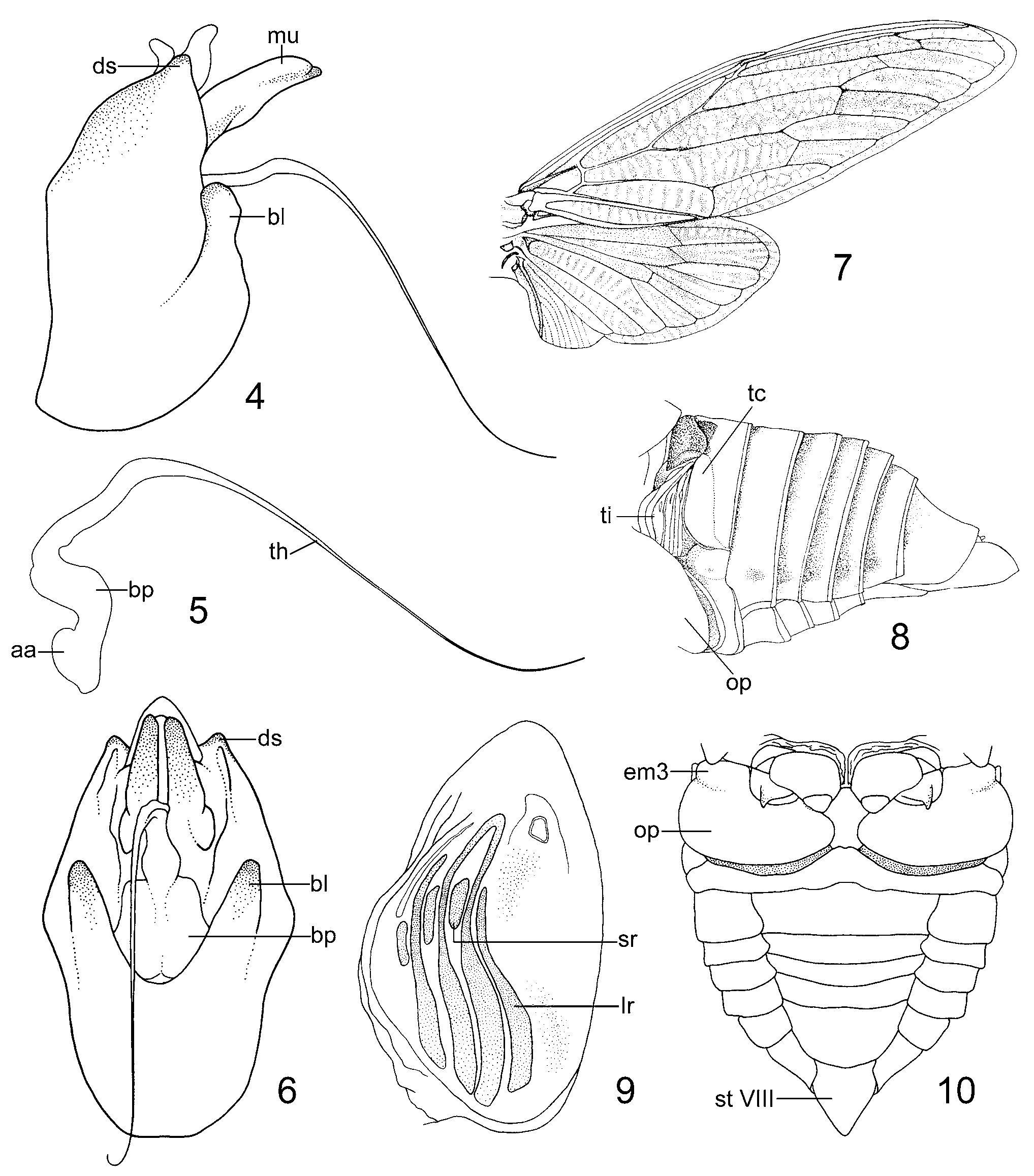 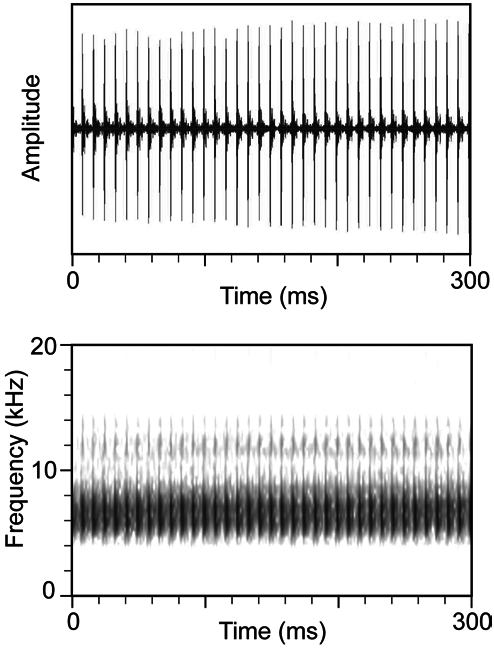