Biogeography. —Three species, ruficauda  , loricata  , and squamosa  , are confined to the Atlantic Forest of Brazil; ferruginea  is found in the Guianan region and south of the Rio Amazon in the Madeira –Tapajós interfluvium. They mainly occur in lowlands except that loricata  is restricted to foothills. The three Atlantic Forest species are allopatric or parapatric, although ruficauda  and loricata  may overlap in Espírito Santo.

Loudsongs.—Loudsongs of loricata  , ferruginea  , and squamosa  are short (6–7 notes), countable series of doublets whose peaks descend in frequency. The loudsong of ruficauda  is also delivered in doublets but given so rapidly that individual notes can barely be discriminated. Only in ferruginea  does the loudsong of females differ appreciably from that of the male.

Foraging behavior.—All four species are highly terrestrial, foraging on the ground and less often jumping up to low perches. All glean prey from leaf litter or substrates within 1 m of the ground. Only ferruginea  is known to follow army ants regularly.

Tail and wing movements.— Myrmeciza ferruginea  flicks its tail up and down in a shallow arc and flicks its wings; ruficauda  slowly dips its tail and raises it more rapidly; loricata  and squamosa  flick their tails (normally slightly cocked) upward before lowering them slowly and flick their wings.

Nest architecture.—Nests of ferruginea  , ruficauda  , and loricata  are open cups placed on the ground, or slightly elevated on a platform of debris, among and often partially covered by dead leaves, branches, and small plants (recent addition: Buzzetti & Barnett 2003). The only nest known for squamosa  is similar but based on the unclear description may be placed among exposed roots of a tree.

Discussion.—Morphometric distinctions lend support to maintaining two genera ( ferruginea  / ruficauda  and loricata  / squamosa  ). Inconsistencies in wing and tail movements and aspects of ferruginea  plumage lend weight to a three genus solution ( ferruginea  , ruficauda  , and loricata  / squamosa  ). On the other hand, commonalities of most aspects of morphology (especially plumage) and behavior (loudsongs, habitat, foraging behavior, and nest architecture) indicate that the species should be placed in a single genus.

Taxonomic Recommendations.—Given the numerous phenotypic consistencies among the species, we recommend that the four species be considered congeneric. Available names include Myrmoderus Ridgway (1909)  , which has priority over Myrmedestes Todd (1927). FIGURE 1. Maximum-likelihood tree of a subset of the Thamnophilinae, showing that Myrmeciza is polyphyletic (species names in these clades are emboldened). Members of Myrmeciza are placed in eight different well-supported clades in the Microrhopiini, Pithyini, and Pyriglenini. The color of the circles at nodes indicates bootstrap support values,> 70 % (black), 50 - 70 % (gray), <50 % (white). 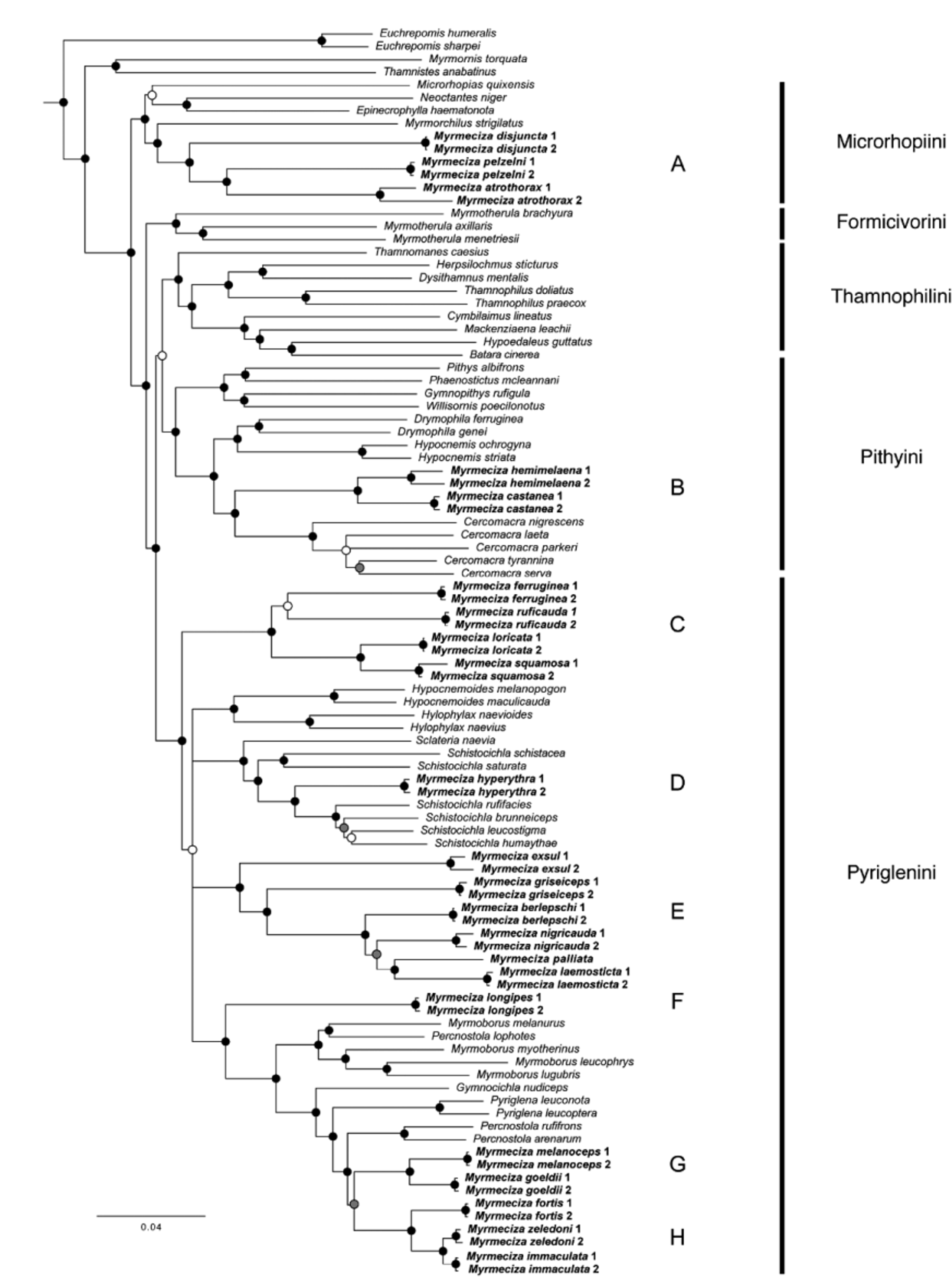 FIGURE 2. Bayesian consensus tree of a subset of the Thamnophilinae, showing that Myrmeciza is polyphyletic (species names in these clades are emboldened). Members of Myrmeciza are placed in eight different well-supported clades in the Microrhopiini, Pithyini, and Pyriglenini. The color of the circles at nodes indicates posterior probability support,> 0.95 (black), 0.95 – 0.75 (gray), <0.75 (white).