Comments. Initially, assuming a somewhat reasonable reproduction of the specimen in the illustration by Sakai & Türkay (2012), we immediately noticed the extremely long antennal peduncle and narrowly elongate antennal acicle, along with a cheliped and walking pereopods that were very near those described for the axianassid, Axianassa arenaria   . Especially compelling, the type locality for this axianassid ( Kensley & Heard, 1990) was just southeast of the area off Santa Rosa Island, Florida   , near the supposed type locality reported for Anomalaxius   . Even so, the type locality reported for this new species by Sakai & Türkay (2012), stated as "shelf, 20 m ", is when plotted several kilometers inland and well to to the west of Santa Rosa Island (in estuarine Perdido Bay, Alabama). This is an obvious error as the two transects figured by Frey & Dörjes (1988: fig. 1), to which the authors referred, are shown to be south of Santa Rosa Island. Curiously, this same obviously incorrect geographical position was given by Sakai & Türkay (2012) for Callichirus santarosaensis   (see below). It is not clear from which of the two transects of Frey & Dörjes (1988) the two specimens came; the "W" in the labels' station information suggests the western one, but in both transects the station numbers and water depths do not correspond.

Our suspicion that Anomalaxius   actually represented a mutilated juvenile of Axianassa arenaria   was at the outset incompatible with the median carina and proximal lateral tooth said to be on the rostrum, a gastric region reported to have broad median and submedian carinae, and the supposed absence of a linea thalassinica, none of which could apply to well-described adults of Axianassa arenaria   . We could not discern these described features on the small, obviously juvenile, holotype specimen ( Fig. 1 View FIGURE 1 A –C) which had largely collapsed and become shriveled by preservation or perhaps dried at some time. Instead, we found no evidence of a lateral tooth on the rostrum, nor median and submedian carinae, all these appearing to be at best artifacts of shriveling and integumental folding ( Fig. 1 View FIGURE 1 D –F). The rostrum (artificially bent down and overlying relatively large juvenile corneas) is not acute, but has a rounded tip. It did show a very slight median linear feature, but under oblique lighting this appeared to be refraction from a weak longitudinal median depression, not a carina. We confirmed on the holotype a rostral depression along with a small terminal papilla as described in Axianassa arenaria   by Kensley & Heard (1990). We observed a clearly identifiable though weakly developed linea thalassinica on the right side, obscured on the left by folds of the carapace ( Fig. 1 View FIGURE 1 B). Yet, most importantly and in contradiction to the authors’ report of their being missing, both second pereopods are largely intact in the holotype and this appendage is achelate terminally (though the tip of the simple dactylus is missing on the right side). This definitively excludes the specimen from Axiidea. Only the P 5 s of both sides are largely missing from the holotype, their absence also stated in the description, with only their coxae being present. Sakai & Türkay (2012: fig. 1 E) thus showed not P 3 and P 4, but left P 2 and right P 4 as we here represent with other pereopods ( Fig. 1 View FIGURE 1 C). In addition, the chelipeds are not equal as stated, but unequal, with the minor remaining attached (not figured by the authors), having 0.8 times the palm length and 0.7 times the palm height of the detached major   P 1. The major   P 1 is on the left side, not on the right as indicated in the legend to fig. 1 D of the description. The telson was described as being shorter than the uropods, but Sakai & Türkay (2012: fig. 1 G) show the tailfan from the left side, not from the right side as indicated by the legend. We found the telson to be folded (see Fig. 1 View FIGURE 1 A), and when unfolded it revealed a rounded posterior border overreaching the uropods ( Fig. 1 View FIGURE 1 G).

We conclude Sakai & Türkay (2012) have placed this specimen in the incorrect decapod infraorder and family, thus providing a new generic and species name for material assignable to a known genus and species. Given our observations and comparisons, we place this genus into synonymy with Axianassa   and place the species into synonymy with Axianassa arenaria Kensley & Heard, 1990   . 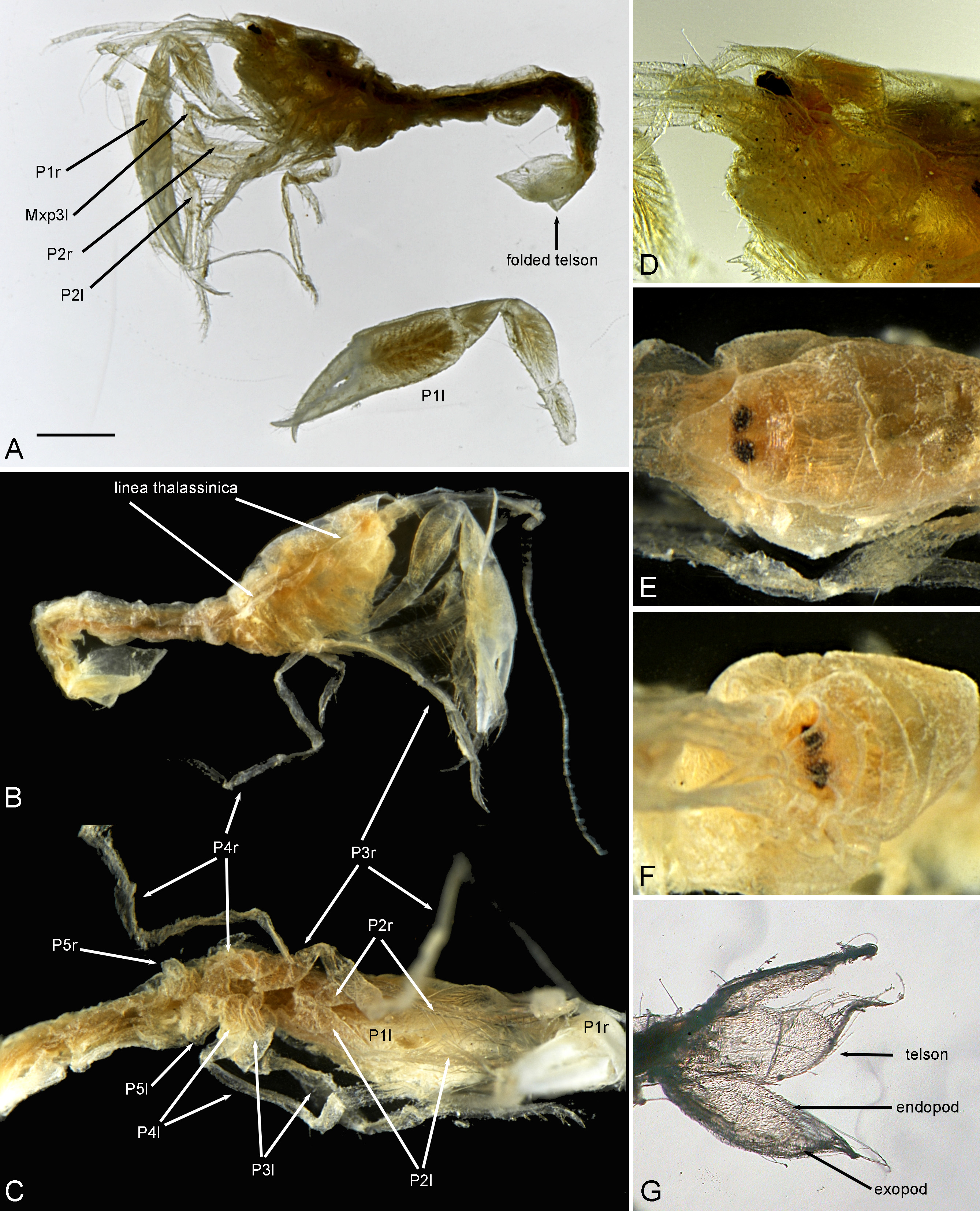