Etymology. The species name honours Veronica Campagna who studied this species in Lake Yindarlgooda for her doctorate and who collected and/or raised many specimens of this species and of P. laticaudata   sp. nov. for this study.

Thoracic segments increasing in width 1 st to 10 th/ 11 th. Thoracopods of Parartemia   type but with a fewer posterior setae on endites 1 +2, 3, exopodite and endopodite. 11 th thoracopod without an epipodite, and first and last two smaller than remainder. Genital segments narrower than posterior thoracic segments and with 2 nd genital segment oval in cross section, so giving a wider appearance than 1 st abdominal segment from a dorsal perspective, but laterally a lower diameter than 1 st abdominal segment.

Gonopods ( Fig. 12 View FIGURE 12 B) paired and about twice the diameter of tubular free apical part. Sharp triangular spine at base of free section and a small digitiform process subapically.

Abdominal segments increase in length and decrease further in diameter 1 to 6. 6 th abdominal segment a little less than twice length of 1 st segment.

Cercopods clothed with setae laterally and medially and subequal in length to 5 th abdominal segment.

Thoracomeres ( Fig. 12 View FIGURE 12 D,E) 1 to 9 normal, thoracomere 10 with large dorsolateral swellings and segment 11 with two smaller dorsolateral swellings, each somewhat sclerotised. Swellings of thoracomere 10 with a weak ridge horizontally near the segment margin. Brood pouch lateral lobes joined medioventrally and directed posteriorly at the gonopore, which is borne on a short tubular structure.

Abdomen as in male, but covered in coarse denticles.

Variability. In males the relative length of the median process varies from about one quarter to almost one half of the depth of the medial margin of the ventral process, while the length of the anterior process also varies a little, though it is always a sturdy cone about twice as long as basal diameter. The ventral processes show a little variation in the degree of convexity of their ventral margins and in the prominence of the medioventral corner.

Differential diagnosis. Both males and females of Parartemia veronicae   sp. nov. are unspecialised without many of the special features seen in most other species. While it is usual for the female head to be undistinctive, the male head too has few remarkable features; the thorax lacks lateral lobes in both sexes and most female thoracomeres are little modified in other ways; females lack the 11 th thoracopod as in most species, and other thoracopods are unremarkable; and the abdomen in both sexes is almost standard for Parartemia   .

However the male is distinctive by having a triangular medial process, a feature shared only by P. acidiphila   . In the latter species it is subequal in length to the depth of the ventral process and is notched at the apex, while in Parartemia veronicae   sp. nov., the medial process is much shorter (<50 %) than the ventral processes and has a single unnotched apex. The ventral processes are shaped differently from that in most species, what with the convex ventral margin, unfolded medial margin and especially the triangular medioventral corner. The later is reminiscent of that in P. triquetra   , but in Parartemia veronicae   sp. nov. is less prominent and lacks a spinous margin. These two species have a similar shaped frontal process, but can be further differentiated by the relative length of the first antenna ― it is almost as long as the basal second antennomere in P. veronicae   sp. nov., but only half this comparative length in P. triquetra   . The frontal processes, while not unique, are certainly not massive and protruding beyond the ventral processes as in P. bicorna   sp. nov., or hardly present as in Parartemia laticaudata   sp. nov., or digitiform as in P. serventyi   , P. contracta   , P. longicaudata   , and Parartemia boomeranga   sp. nov., but they could be confused with those of P. triquetra   , P. zietziana   , P. informis   and P. acidiphila   .

Distribution and ecology. Parartemia veronicae   sp. nov. is known from the Goldfields from Willuna in the north to both and east and west of Norseman in the south (Timms et al. 2009)( Fig. 4 View FIGURE 4 ). Its known salinity range is 74 – 225 g /L ( Chaplin, 1998). Information on its ecology is given in Campagna (2007) (as Parartemia   n sp. d) and Chaplin (1998) (as Parartemia   sp. a). This species also has stress proteins and trehalose in its eggs to help survive in severe saline conditions (see comments on P. laticaudata   sp. nov. above) ( Clegg and Campagna, 2006) 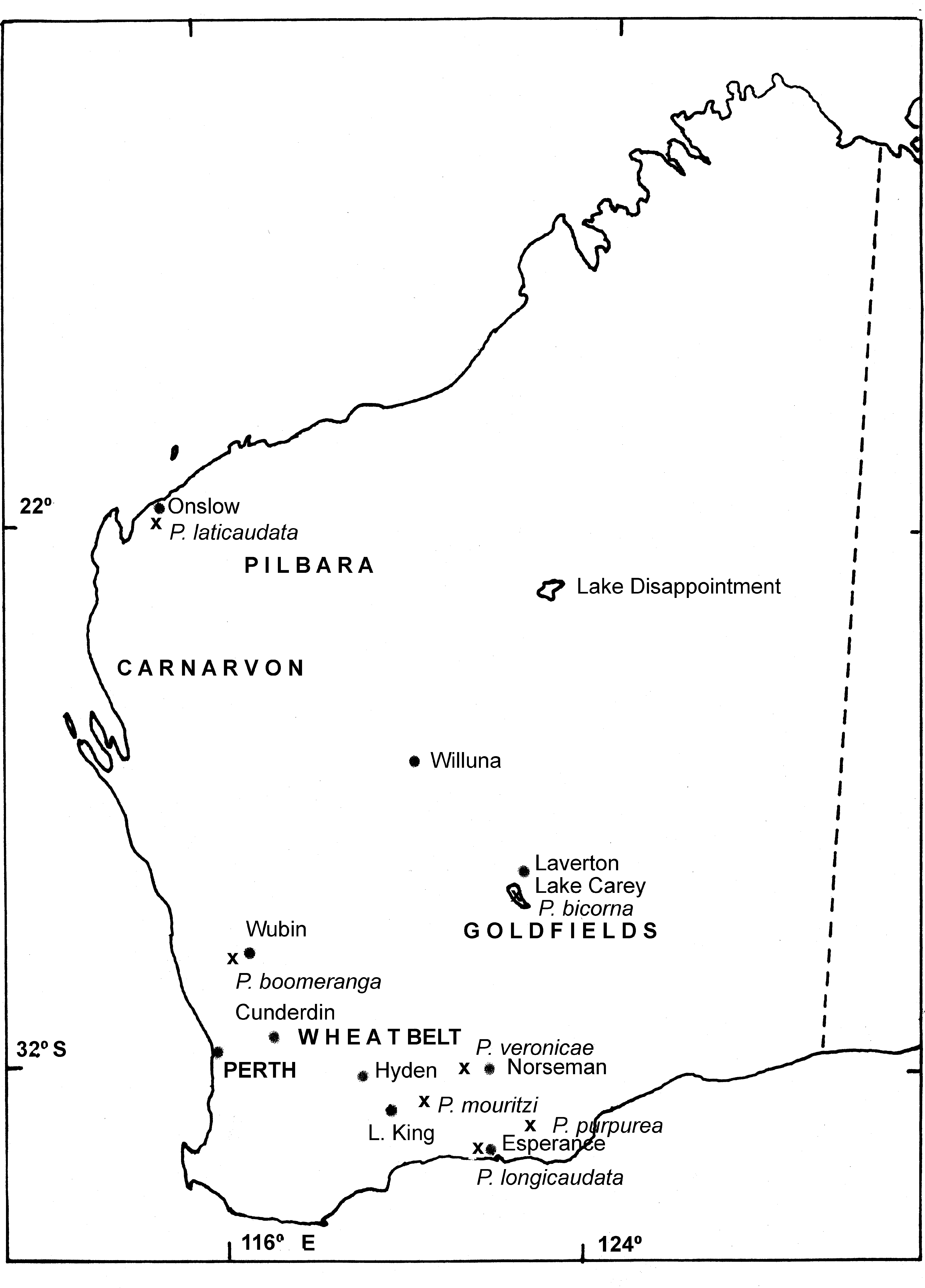 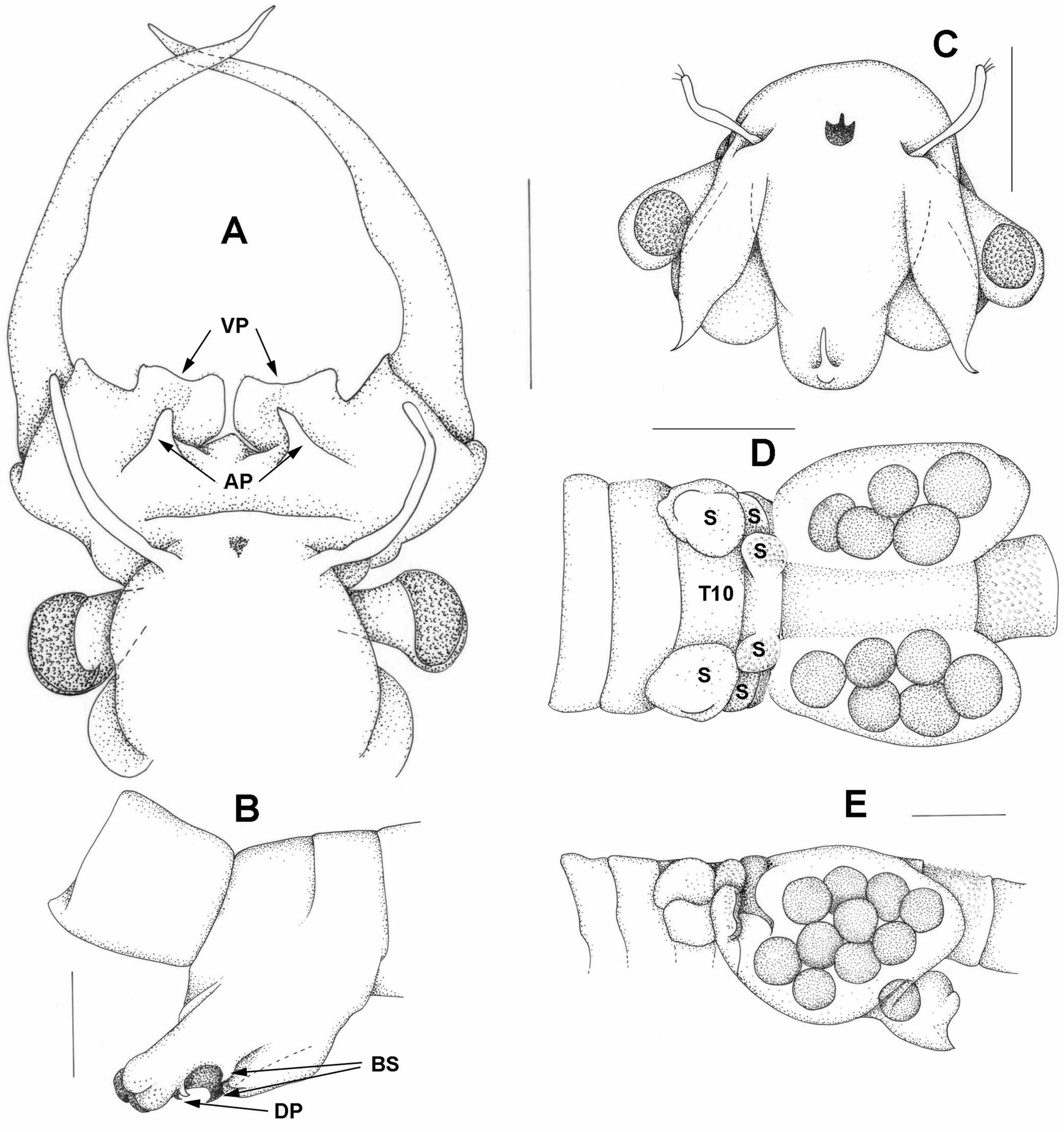