Etymology. – The species is named after Dr Pierre Couteron (Institut de Recherche pour le Développement, Montpellier, France) in recognition for his constant support to the second and third authors.

Distribution, ecology and phenology. – Sabicea couteronii has an apparently very scattered distribution ( Fig. 4 View Fig ), being known from one locality in south Cameroon (near Sangmelima), one in central Gabon (Waka National Park) and two in southwestern Republic of Congo (Mayombe and Chaillu massifs). It occurs in secondary forest, edges and regrowth, c. 685 m in elevation (probably also lower).

Flowers have been collected in May-June, fruits in November and January (immature) and June (mature).

Conservation status. – The extent of occurrence ( EOO) of S. couteronii is calculated to be 73,728 km ², exceeding the limit for “Vulnerable” status under subcriterion B 1, while its area of occupancy ( AOO) is estimated to be 16 km ², within the limit for “Endangered” status under subcriterion B 2. The species occurs in Atlantic Central Africa ( Cameroon, Gabon and Republic of Congo) and is known from six specimens, representing four subpopulations. Two of them occur in protected areas, Waka National Park in Gabon and Dimonika Biosphere Reserve in Congo. The other two subpopulations occur along roads, and the Cameroonian one at least is threatened by habitat destruction due to agricultural activities. A decline in habitat extent and quality and number of individuals is therefore expected. The four subpopulations represent four locations in the sense of ICUN (2012), and the species qualifies for “Endangered” [EN B 2ab(iii,v)] using the IUCN Red List Categories and Criteria ( IUCN, 2012).

Notes. – Sabicea couteronii resembles both S. nobilis and S. proselyta , which both occur in its range, and at first sight might be suspected to be a hybrid between them; this is however unlikely, as it differs from both by the colour of its fruits, which are purplish-red when young and blackish when mature (vs. white or greyish-white). It is further separated from S. proselyta by its strongly discolorous leaves with dense woolly indumentum below ( Table 1 View Table 1 ), and from S. nobilis by its (shortly) branched inflorescences, reticulate seed surface, and the presence of long silky hairs (in addition to woolly ones) on the stems, petioles and underside of the leaf veins.

The specimens from Gabon and Congo are either vegetative (Cusset 875) or with immature fruits (Boussengui-Nongo et al. 309, Kimpouni 600) but match very well the Cameroonian material, differing only in the longer peduncles (probably not a very significant character), and, in the case of the Gabonese material, sparser indumentum of the lower leaf surface (probably because the leaves are older). Therefore, we regard them as conspecific. Kimpouni 600 was previously cited as Pseudosabicea proselyta ( LACHENAUD, 2009) of which it was the only record from the Republic of Congo; however, authentic Congolese specimens of S. proselyta have since been found (see that species).

It is not known if S. couteronii is heterostylous; only the type specimen bears flowers, which are of the long-styled form. 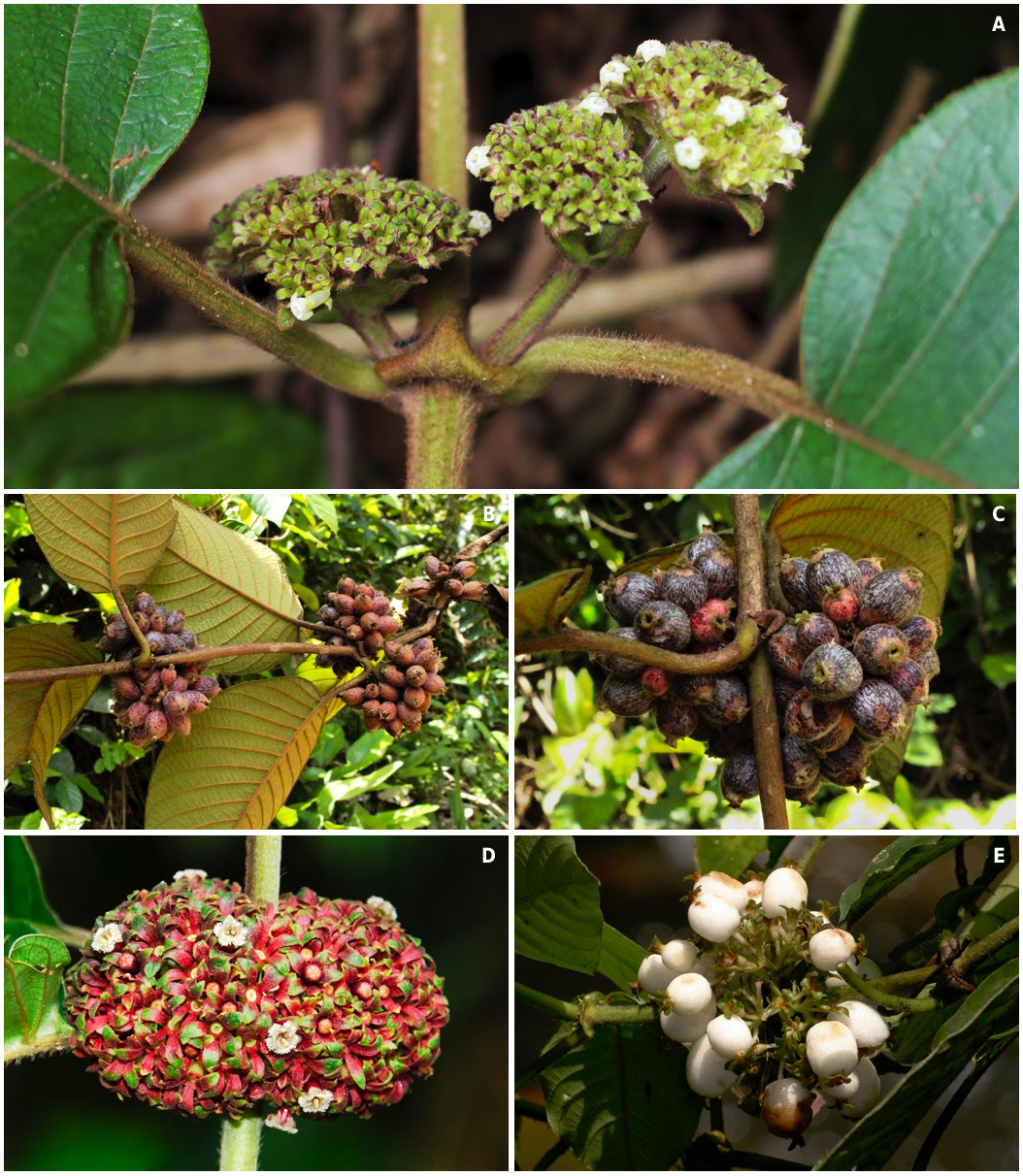